Alert, alert! Huge casting news announced today. Because it involves a spoiler for tonight’s episode, I won’t go into detail just yet … so read on for the full episode recap and find out who your next Bachelorette will be at the end of the article.

THE PLAY BY PLAY

Last week, our Midwestern Stud Muffin said, “To hell with tradition!” and cut a whopping SIX WOMEN in one episode. It was an emotional send-off that left the remaining contestants in shock and Nick in doubt that the process of falling in love on national television would work out in the end. In his vulnerable state, he turns to the only man who matters — our host with the most, the almighty Chris B. Harrison. Having watched dozens of former contestants go through the same tumult, Chris is here to ask the tough questions:

“Be honest … are you ready to quit and walk away from all this?”

“I think there’s a big part of me that is. And I think that’s what scares the BLEEP out of me.”

Nick is ready to close the door on St. Thomas and take the party to the Bimini islands. The first date card arrives for Vanessa: “Let’s go deeper…”

My mind went there, too, Rachel. But I think the date will actually revolve around deep-sea diving or building a deep emotional connection. Have no fear. They’re boarding a yacht.

“I’ve never been on a boat before!” Vanessa squeals with joy. She and Nick recline on the deck and talk about their feelings. Vanessa is (understandably) worried that Nick is going to force a connection with someone just because it’s what’s supposed to happen on the show. And Nick agrees that it’s a concern! Is this the most self-aware date in Bachelor history? I love it. They take to the sea and enjoy a romantic swim through a shipwreck.

That evening over dinner, with the wind perfectly blowing back her hair, Vanessa shares the biggest emotional insight of all … she’s falling in love with Nick!

Damn, girl. Unfortunately for Vanessa, Nick is unwilling to reciprocate at the moment. He tells her that if he gets to a point where he truly is in love with someone on the show, he will only use the “L” word with that one person. It’s just too early for our Bachelor to make that commitment. Ouch. Sorry, Vanessa!

Ready for the next oceanic adventure? Everyone’s favorite “business owner,” Corinne, is going on a group date with Kristina and Raven. All three of them believe that Nick is their boyfriend, so tensions are running high. And the women who receive a rose are guaranteed a hometown date next week.

Corinne concocts a nefarious plot for destroying Kristina and Raven’s emotional well-being on this date. The self-proclaimed “queen of group dates” is ready to put her Floridian boating skills to good use. But she fails to foresee Nick’s consideration of proper skincare in the Bahamian heat. The winner of the “slather me with sunblock” award is Kristina!

This date is about to take a dark turn — the group will be swimming with sharks, but not in the fun protective-cage sort of way. What’s up with Nick and animals this season? Alligators, cows, now sharks? You can guess what happens next…

J/K! Everyone is safe, and they head back to dry land. Nick gets teary-eyed talking to Kristina about the events of the past week, but it only serves to strengthen their connection. Corinne anxiously eats cheese as panic sets in, knowing that Kristina and Nick are so solid in their relationship.

And yet … the group date rose goes to Raven! Kristina and Corinne are not too pleased.

Our next date is a one-on-one with Danielle. They ride bikes and talk about how love is like … um … riding a bike. Listen, I love puns and wordplay and stupid jokes of all shapes and sizes, but the heavy-handed metaphors on this show are enough to make me pull my hair out. Next activity is a basketball game with some kids from the neighborhood. Did Nick and Danielle discuss how their relationship is a slam dunk, that love is like zone defense, and you have to guard your own heart? I don’t know; I put the TV on mute. Then I un-muted it and heard Danielle say that she and Nick were “falling into a rhythm” over footage of the two of them dancing together. Oy.

Evidently, Nick has had enough of it, too. When discussing their potential hometown date, our Bachelor freezes up. He tells the camera that he’s not sure if it’s nerves or lack of chemistry, but the conversation is not flowing naturally between him and Danielle.

Nick subtly drops the worst complinsult you can say on The Bachelor and calls Danielle “sweet.” It’s the kiss of death. She still isn’t picking up on his body language or facial expressions, though, and proceeds to tell Nick that she cares a lot about him and is really excited for the future. But the Friend Zone is a cold, cruel place, and unfortunately, it’s where Danielle’s journey will end tonight. “You’re just so great,” Nick offers. I have to splash cold water on my face when I hear Danielle’s reply:

Danielle, you are better than great. You’re just too normal and kind for our Nicky-poo. Repeat after me: You will be fine.

With one less woman standing in her way, Corinne has her eyes on the prize. Time to sneak into Nick’s hotel. She clomps down the hallway (6-inch Louboutins not being the best choice for making a stealthy entrance) and declares her intent to “hang out.” Here it is folks, the line we’ve been waiting for all season…

So … it’s shiny and strong enough to hold up to prolonged wear and tear? Blech. Corinne and Nick start doing who knows what with their microphones still on … until Nick puts an end to it! Sex just wouldn’t be right unless officially sanctioned by a “fantasy suite” invitation. Dejected, Corinne and her platinum vagine leave Nick and his sapphire balls to fend for themselves. Down the hall she goes, so set on making a dramatic exit from the Hilton that she bypasses an automatic sliding door to push another one open herself. You know that old saying, “When one door closes, another one opens on its own, but you can’t necessarily trust it, so always take matters into your own hands.”

The next day, Nick is excited to take Rachel on a date to “a place that’s known for having no tourists, only locals.” And camera crews. And trailers. And craft service. Anyway, it’s fine. Nick and Rachel are going to enjoy a chill day of drinking beers and discussing racial identity. Nick wants to know how similar or different he is to other men that Rachel has brought home to meet her family. He won’t ask it directly, but Rachel knows what he’s getting at. “I’ve never brought home a white guy,” she replies, but she makes it clear that her parents will only be skeptical of Nick’s intentions as a reality-show contestant, not the color of his skin. And they trust their daughter’s judgment and intelligence. If she’s bringing someone home, he must be important to her.

Rachel, if you ever write a coffee table book of witty sayings, I promise to buy a copy.

KISS FROM A ROSE

In Bachelor time, we’re hours away from a critical rose ceremony that will determine the three women (besides Raven) who will be taking Nick on hometown dates. So, Nick and Chris Harrison sit down for some real talk. Nick knows who he is going to send home. And he cares about her enough to want to break the news in private rather than waiting for a rose ceremony. He heads into the ladies’ villa to find … KRISTINA.

Nick tries to share his feelings as gently as possible. But this is tough to watch.

He says that he simply has stronger relationships with other women in the house, but Kristina doesn’t believe that Nick gave her a fair chance. Ugh, ugh, ugh. Another intelligent, mature woman sent home in order to keep Sparklepuss around for one more week.

Damn right, Nick. Keep crying over that balcony and think about what you’ve done.

Spoiler alert… the next Bachelorette has been revealed. Here’s the weird thing: She’s still in the running to end up with Nick as of tonight’s episode. So, if you want to prolong the fantasy a bit longer, I would suggest clicking that little “X” in the upper-right corner of your screen. I’ll see you next week. 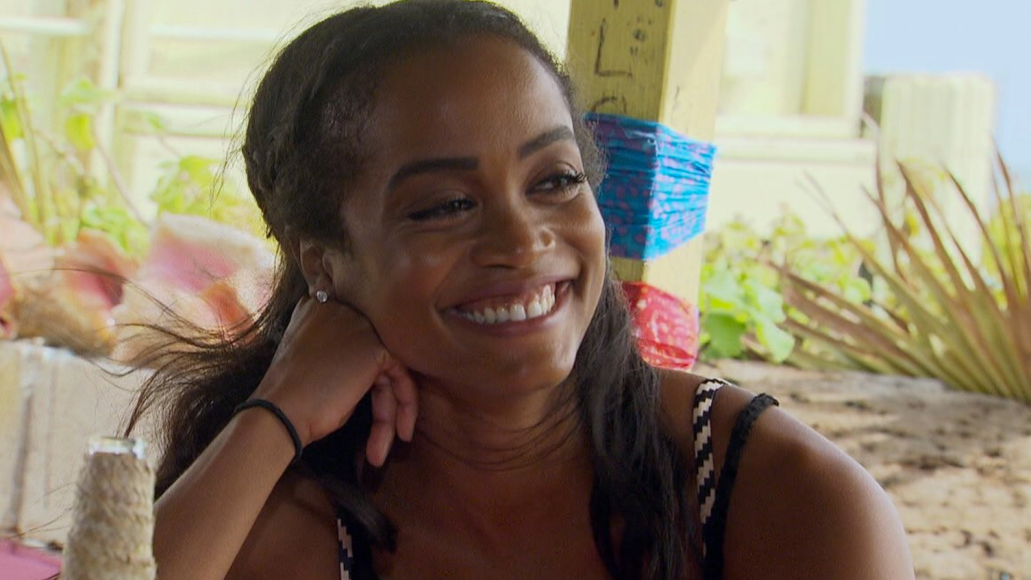 Yes, the rumor is true! The news was confirmed with an official announcement during Jimmy Kimmel Live, and it marks the first time in franchise history that a non-white contestant will lead the season. ABC has faced ongoing scrutiny for its lack of casting diversity over 33 combined seasons of The Bachelor and The Bachelorette.

Watch Rachel and Jimmy discuss the upcoming season below: