Hello Bachelorphiles. There was no time wasted diving into tonight’s episode, as the four remaining contestants picked their jaws up from the floor to process the fact that Nick sent Kristina home. “Too many surprises!” they moan, and I can see why. This show is built on a formula, Nick. How dare you mess with it?

But our Bachelor comes to greet the ladies with four roses in hand. They’re all officially going on hometown dates! Phew! And he’s sparing them the agony of a rose ceremony tonight. What a gentleman. 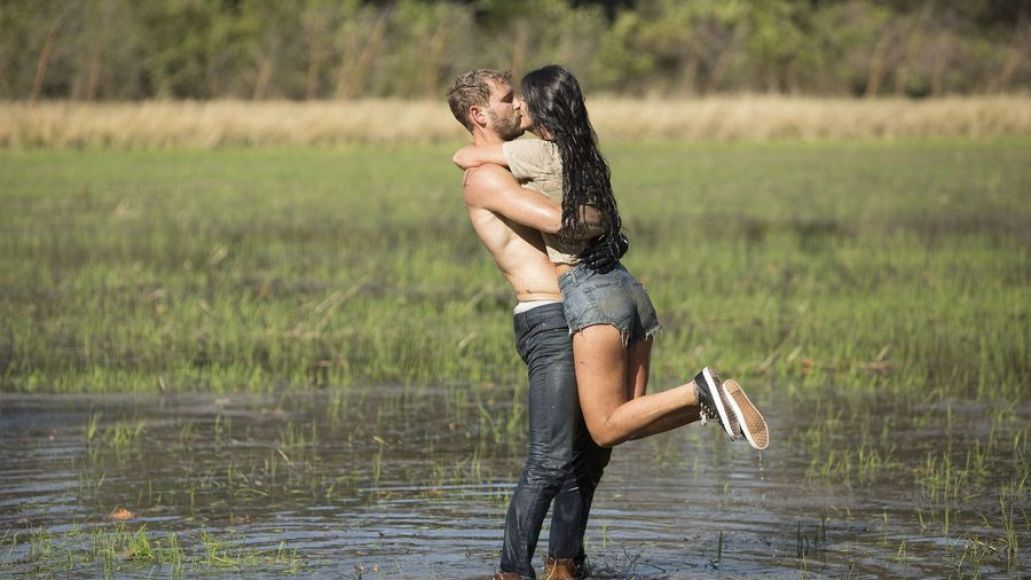 First up … frogs are croakin’, birds are chirpin’, and Raven is drivin’ some sort of ATV. We’ve made it to Hoxie, Arkansas, for the first hometown date of the season!

The mythology of Hoxie’s grain bins is storied and sacred. Honestly, I don’t even understand what I’m typing right now. Raven tells Nick that when you have a meaningful conversation with someone in Hoxie, you have to find a grain bin, and then the grain bin will hold your secrets. Pardon my ignorance — a grain bin is a silo, right? This may be the first time all season where my GIF selection is absolutely critical to your comprehension of the recap.

So, Nick and Raven start ascending the grain bin staircase when a police car pulls up, siren blaring. The officer pretends to not notice the camera crew and tries to freak Nick out as if he was trespassing on private property. No ID, no explanation, and you’re not from “around here?” Nick, you’re heading to Hoxie Jail. Just kidding! The prankster policeman is none other than Raven’s brother. Good one, Officer Gates! You certainly fooled us all.

Now the fun can truly begin. A second ATV materializes out of nowhere so that Nick and “fun, sexy, smart” Raven can race each other through a soggy field. And then the clothes come off. Ugh, this is like the grown-up version of the teenagers who get $h!tfaced and slip-n-slide through the mud puddles during Lollapalooza.

I know they’re having a blast, but I am truly disgusted by the thought of making out in a bog.

Time to meet the parents! In her voiceover, Raven explains that her father had recently undergone treatment for lung cancer, so bringing someone home to meet him is a milestone in and of itself. After introductions comes some great news: Mr. Gates is officially cancer-free! Nick asks how he would feel if Raven were the last woman standing and Nick proposed.

“It would satisfy me,” he says, and Nick is fine with this answer. So hugs, handshakes, thumbs up … everything seems like it’s moving along according to plan. But did Raven make a mistake by not telling Nick that she’s in love with him? 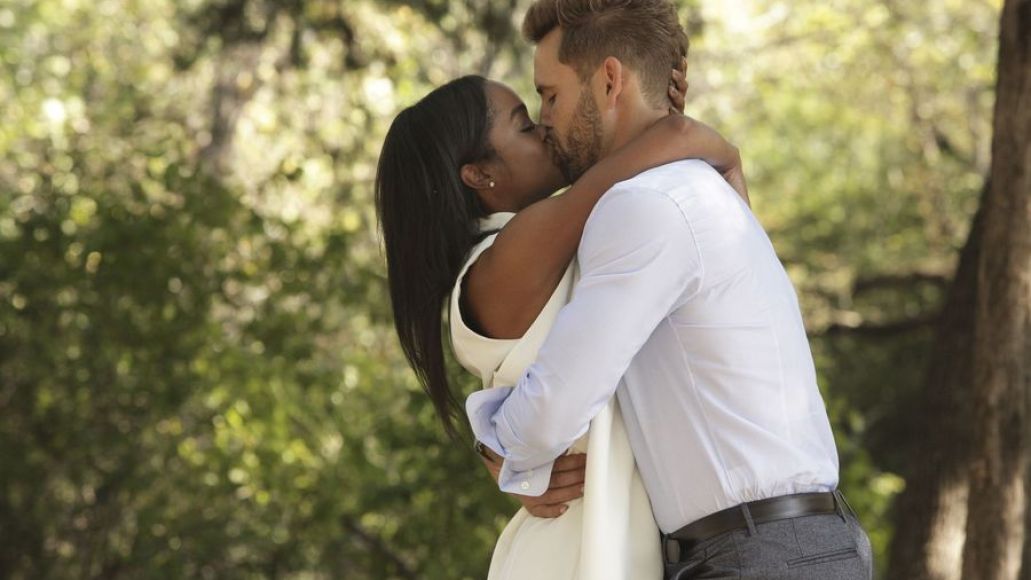 Howdy, y’all, and welcome to Dallas. Nick tells us that he has “explosive chemistry” with Rachel, and he’s excited to build their relationship. And what does Rachel have planned for the dynamic duo?

Though he eventually loosens up, Nick is yet again a bundle of nerves when it’s time to meet Rachel’s family. Her brother-in-law acts like he’s trying to take over Chris Harrison’s hosting job and sits down for what feels like an interview rather than a casual getting-to-know-you convo.

Everyone is concerned about the fact that Nick has only gone on dates, but not actually had a full-out relationship, with a black woman before.

But Nick is open to having the discussion and tries to reassure the family that he and Rachel would be equipped to handle the challenges that interracial couples can face. Rachel’s mother is confident enough in her conversation with Nick to tell her daughter that she trusts her judgment and can see the potential in their relationship.

IN IT TO CORINNE IT 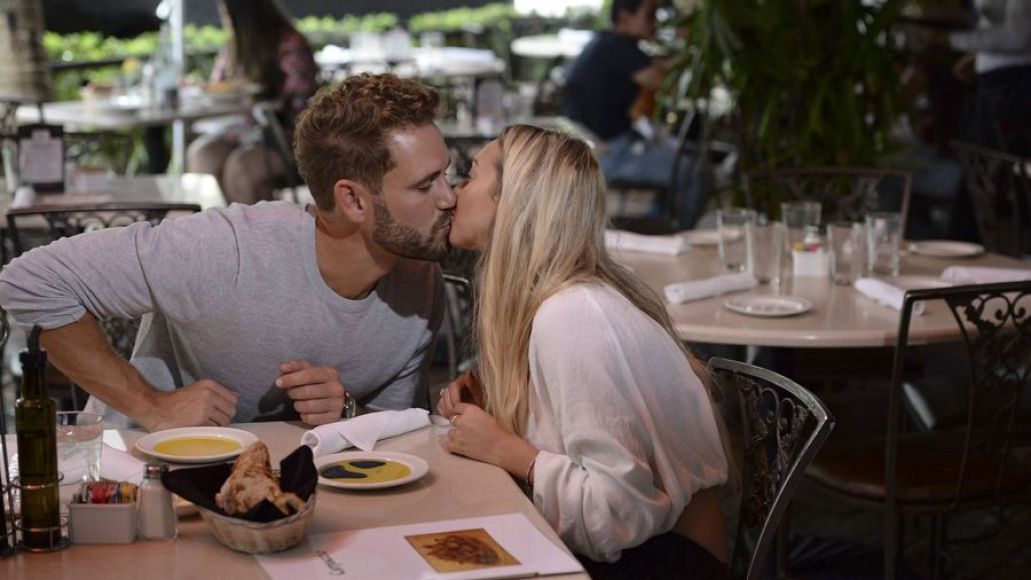 Bienvenido a Miami! Get ready for some major retail therapy with Corinne, who is on a first-name basis with every designer boutique employee at Bal Harbour. She’s truly in her element on this date.

And we’re treated to a delightful montage of Nick trying on super expensive clothing to find the perfect “meet the parents” outfit.

The winning ensemble costs $3,423.87, which Corinne deems a bargain as she hands over her father’s credit card. The shopping spree experience is so powerful that Corinne tells Nick she loves him. Ooooh, things are heating up in South Florida.

Moving on. We head to a luxury high-rise building and meet Corinne’s family … including Nanny Raquel! Here she is pretending to enjoy one of Papa Olympios’ famous marinated olives.

Corinne and her dad need to discuss finances. Nick’s former job as a software salesman does not impress Pops in the slightest, and he declares that it’s a strong possibility Nick will be “the at-home mom raising the kids” (huh?) while Corinne will have to support the family (meaning, her shopping habits) on her own. Corinne is on such a love high that she’s completely fine with that hypothetical scenario. And if daughter is happy, dad is happy.

That being said, Mr. Olympios does not hesitate to drop details about the expensive whisky he’s drinking before grilling Nick on his lack of a potential financial future.

At the end of the night, both parents seem convinced that Nick is a good match for their special little lady. Corinne escorts Nick to the entrance of a building, where a car is waiting to take him back to the Holiday Inn. The Olympios family gathers in front of their picture windows to watch Nick and Corinne make out 30 stories below. Raquel is forced to do the dishes. 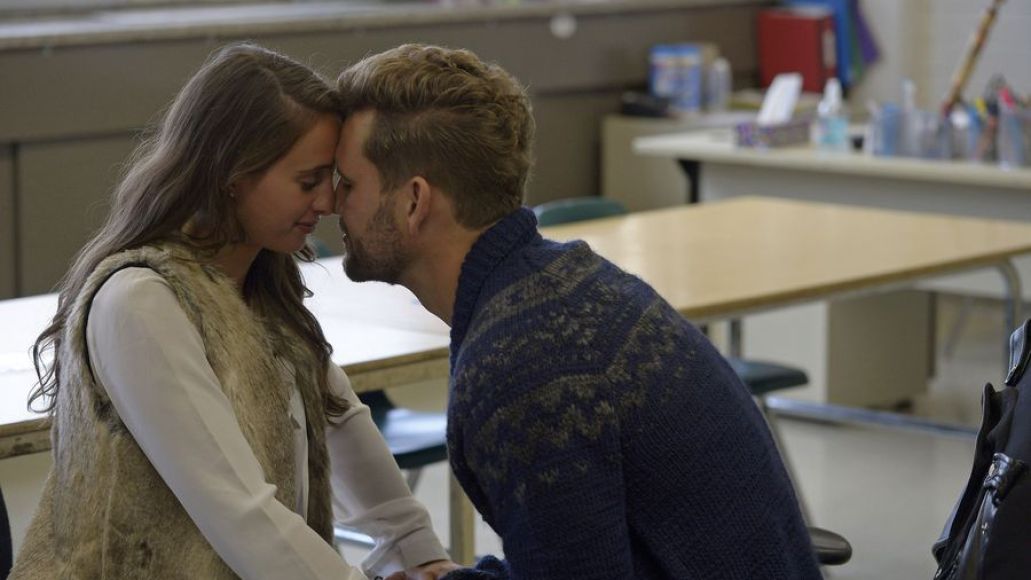 Nick heads to Montreal to meet up with Vanessa and spend the morning getting to know her students. They are thrilled to see her and excited for the day’s project: making a scrapbook of Nick and Vanessa’s special moments on the show. Adorable.

Family time will be split because Vanessa’s parents are divorced. First up, her mother’s side. Vanessa tells us that she hasn’t brought a boyfriend home to meet the family in three years, so this is a biggie! They step through the door and are greeted by approximately 64 of Vanessa’s closest friends and maternal relatives. Various aunts and siblings are shocked to learn that the couple hasn’t discussed post-show logistics (i.e. where they’d live if they got engaged). Mama Grimaldi is worried that Nick isn’t worthy of her daughter’s affections. Vanessa’s older sister doesn’t sugarcoat her feelings.

Both Vanessa and Nick acknowledge that the day didn’t go as smoothly as they’d hoped. Admitting that their relationship has been based off the emotional rather than the practical, there are still many unanswered questions about the future. Let’s hope things are better when Nick meets Vanessa’s father!

Yet again, Nick drops the “hypothetically, are you cool with me proposing to your daughter?” question to a skeptical dad … only this time, the outlook isn’t as sunny.

After talking it out, Vanessa’s dad seems to think Nick is honest enough to earn “the blessing,” despite there being three other women in the running for our Bachelor’s heart. He tells this to Vanessa, whose excitement turns to indignation when she learns that Nick asked EVERY father the proposal question.

KISS FROM A ROSE

With hometown dates in the can, we’re heading to NYC for the next rose ceremony. Nick sips a cappuccino and decides which of the four women’s families he will be destroying tonight.

But in true Bachelor fashion, it’s time for a shocking twist. We hear a knock on the door to Nick’s hotel room. It’s Andi! The former Bachelorette who broke his heart. Ahhhh!

"This could all still blow up in my face." – Nick #TheBachelor pic.twitter.com/hajvkrlnyo

Tune in next week to find out what Andi wants. Besides 15 more minutes of fame, I mean.