It’s a dreadful truth that roles for women over 40 are hard to come by in Hollywood. If they are available, it’s often the mother or grandmother of a main character, reserved for formerly in demand talent that has aged out of prime roles. If you haven’t already made your mark before 40, the prospects of getting good work are even less likely. But in terms of finding well-rounded, deep, juicy acting parts (and dare we say even something with a little sexiness to it), women in facing middle age have it much more difficult than their male counterparts. 50-year-old men are cast with 25-year-old wives while the number of 40- and 50-year-old women who are given the opportunity to carry films is particularly thin this side of Meryl Streep.

Things aren’t always much better on television, but it stands to reason that the increased amount of prestigious small-screen programming has made for bigger, better, and more abundant roles for women over 40. Jessica Lange has seen a career resurgence on American Horror Story. Lena Headey steals scenes on Game of Thrones. Julianna Margulies, Viola Davis, Keri Russell, Winona Ryder, Thandie Newton, Julia Louis Dreyfus, and Sarah Paulson have all owned some of the most acclaimed roles on TV in the last couple years. With all that considered, it’s not that surprising that a couple of Academy Award-winning legends who claimed any part they wanted a decade ago are turning to TV to get what’s increasingly rare in film: roles worthy of their talents.

Reese Witherspoon is 12 years removed from her Best Actress turn as June Carter in Walk the Line while Nicole Kidman is 15 years beyond her win for The Hours (which came a year after she probably should have won another one in Moulin Rouge), but it’s not like the pair have been sidelined in the film industry. Kidman is up for another Oscar this year for a supporting role in Lion while Witherspoon was nominated two years ago for Wild. Neither is coming to Big Little Lies with the need to reinvent herself or make some sort of comeback. They’re simply involved because TV is the place where the best stories are being told. The era of stars being too big for television is long over. Now, it just makes sense for the best actors to be taking the best roles, which is what Big Little Lies has for its cast in spades. 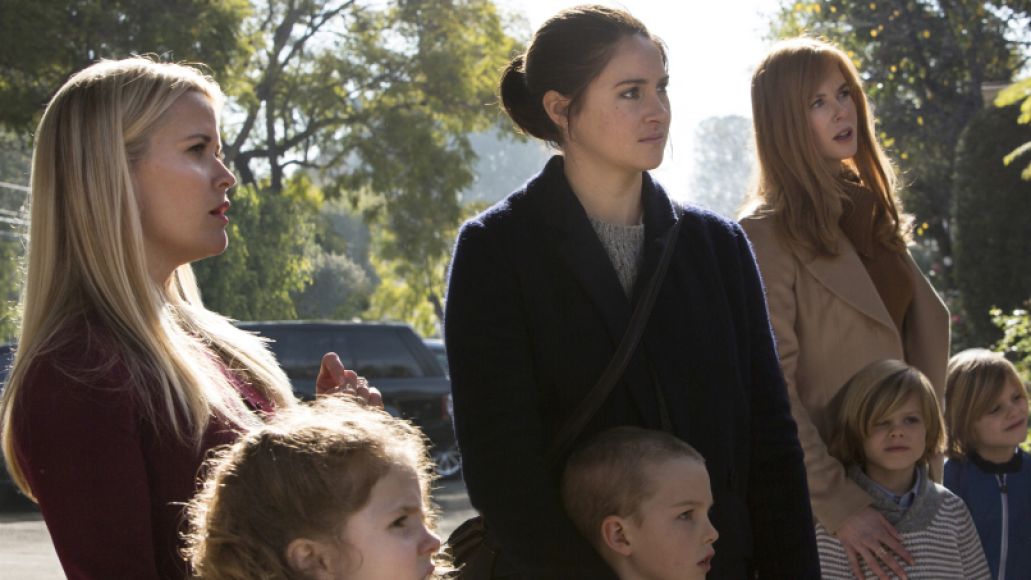 The seven-episode series from writer David E. Kelley (Ally McBeal, The Practice) and director Jean-Marc Vallée (Dallas Buyers Club, the aforementioned Wild) centers on the affluent beachfront town of Monterey, California. As Witherspoon’s Madeline Martha Mackenzie tells new mom on the block Jane Chapman (played by a slightly overmatched Shailene Woodley), the town’s mothers are separated by an over/under income of $150,000, which both claim to be under. Mackenzie considers herself a full-time mom to her two daughters, the precocious first grader Chloe and the rebellious teenager Abigail, while also working part time on a community play. Chapman is in a similar boat, despite being much younger than the other mothers and aloof about her lack of father for her only child, Ziggy. Rounding out the threesome is Kidman’s Celeste Wright, a former lawyer who left her career behind after birthing twins. Now she’s also a full-time mom, though her seemingly passionate marriage to younger dreamboat Perry (Alexander Skarsgård) occupies a good amount of her time.

If this all sounds a little innocuous, it really isn’t. Within the first episode, the viewers discover how this tale ends: One of the characters will be murdered by another at an Elvis and Audrey Hepburn-themed talent show. And as the series unravels its characters and their relationships, virtually everyone becomes a possible suspect or victim.

For Madeline, her life proves much more complicated than raising her two girls. Between her tenuous relationship with her ex-husband, Nathan (James Tupper), her rivalry with Nathan’s much younger, Zumba-teaching second wife (Zoe Kravitz), and her strained marriage to awkward nice guy and standing-desk poster boy Ed (Adam Scott), the drama presented by four adults teaming up to raise children is enough to drive any of them to murder. 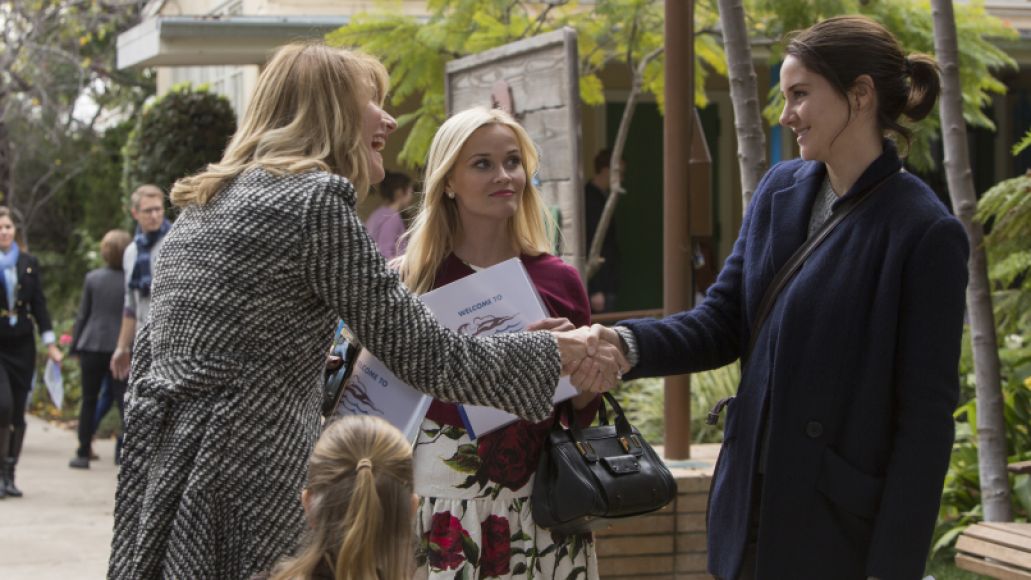 Added to the fold is an intense rivalry with another mother at the school, Renata Klein, who represents everything that Madeline hates. Renata is a successful business woman who holds everyone in the town up to her impossibly high standards. On the first day of school, her daughter, Amabella, finishes the day with choke marks on her neck and fingers new kid in school Ziggy as the culprit. This sets off a war between the mothers, where birthday parties become battlegrounds and children are unwitting pawns. Another over-40 powerhouse, Laura Dern, relishes the role of Renata, packing her scenes with the right mixture of insecurity and entitlement. For a woman that’s succeeded at everything in life, motherhood should be no different.

And while the cast is particularly sharp from its most experienced members to the children, it’s Kidman and Witherspoon who steal the show. Kidman’s Celeste is not happy being confined to her home life, but any reach beyond is met with rebuke from her husband. As the series unfolds, their marriage is revealed to be toxic in terrifying ways, with Kidman portraying an abused woman’s brave fight for survival with dignity, clarity, and brilliance. Celeste is a woman who is acting in every action of her life. Coffee with friends is putting on a brave face. Altercations with her husband are exercises in not showing fear. And trips to a family therapist are tightrope walks to reveal enough to get the help she seeks but not too much as to cause alarm. 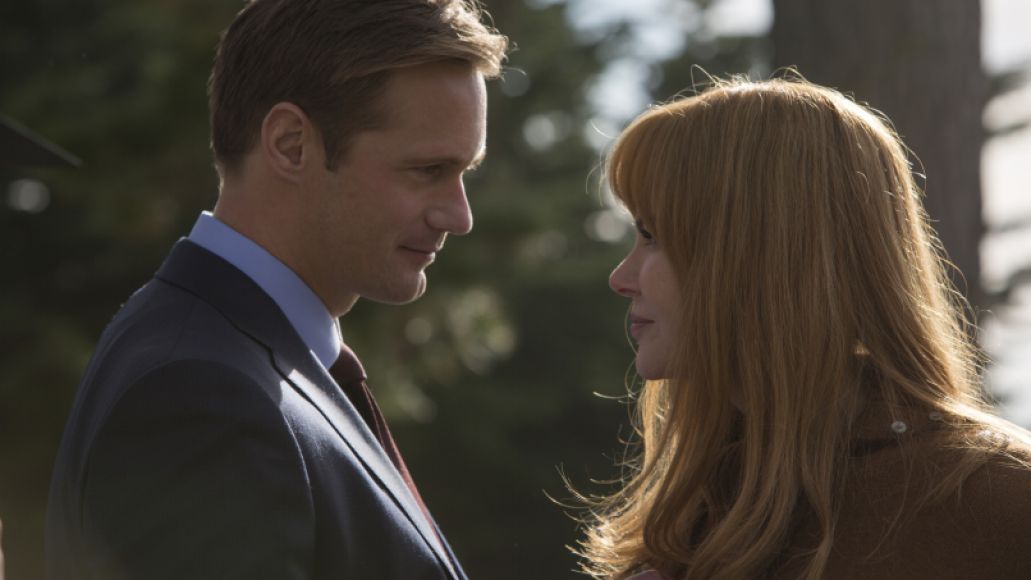 Witherspoon is much more flashy in what is essentially the adult version of the Tracy Flick character from Election that she impressed with nearly 20 years ago. She’s full of sharp wit and aggressive power plays, but it’s when she is at her most vulnerable (confessing an affair to her oldest daughter, breaking off her romantic fling to her hospital-ridden lover) that Witherspoon is allowed to be out of control. And that’s what Big Little Lies gets most right about its characters. Be it Celeste, Renata, or Madeline, none are expected to have all the answers. Experience doesn’t equal wisdom, and these women are allowed to make mistakes that are usually reserved for those younger than them. To say this is a realistic look at the experience of middle-aged women would be to ignore the juicy melodrama and comedic elements of the show, which all work to make the series a genuine episode-turner. But there is something honest and human in just how fallible these mothers are allowed to be without the need to be judged for it by the audience. It’s not as flashy as HBO’s biggest productions, but early in 2017, it poises itself to be among the best television experiences to come this year.