The morning after Election Day here in Brooklyn, I walked to my local deli to pick up the New York Times for history’s sake (I did that with Obama and when HRC nabbed the Democratic nomination). It was a miserable and rainy day, and I remember thinking that Mother Nature probably also shared in the country’s general feeling that we were royally fucked. What did I queue up on Spotify for this dismal stroll to the corner store, you ask? It was A Moon Shaped Pool, and it was the perfect choice.

Any time that it rains and I need to drag myself through it, I pull up a Radiohead record or Thom Yorke’s excellently dreary 2006 solo album, The Eraser. The UK alt-rockers are known for their melancholy arrangements — they are the soundtrack to the world folding in on itself, to the Eeyore moments, to when the light in a room suddenly goes off and you realize it will never come back on again.

Is there one song in their expansive discography, however, that stands above the rest in terms of sad factor? Fans will undoubtedly have their opinions, but according to data scientist and Radiohead stan Charlie Thompson, there is actually a scientific process to digging up such an answer. As Gothamist points out, Thompson put together a whole study involving Spotify, lyrics, and, what he calls the “gloomy index”:

“The basics are: he used Spotify to measure a song’s valence (a measure from 0.0 to 1.0 describing the musical positiveness conveyed by a track, with high valence meaning joy and low meaning sadness), then used Genius and other programs to pull apart how sad the lyrics are, which he then turned into an overall “gloom index.”

An image of the resulting index can be seen below (head here for the full, interactive version). After crunching all the numbers, Thompson found that A Moon Shaped Pool cut “True Love Waits” is scientifically the most depressing Radiohead song. I guess it was worth waiting for that track for the last 15 years. 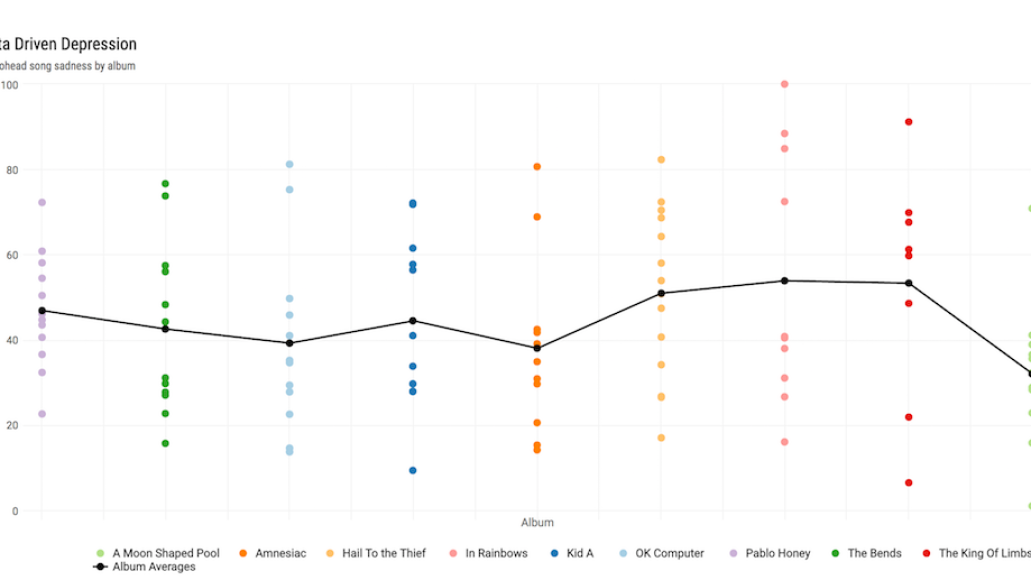 “Of all nine studio albums, Radiohead’s latest release, A Moon Shaped Pool, boasts the lowest average gloom index,” he writes in his conclusion. “This is driven largely by the fact that its finale, ‘True Love Waits,’ was the gloomiest song overall. It’s also apparent that A Moon Shaped Pool broke a trend of relatively less depressing albums since 2003’s Hail to the Thief.”

“Motion Picture Soundtrack,” “Give Up The Ghost,” “High and Dry,” “Let Down,” and “Exit Music” were among the close contenders, in case you’re putting together a #1 Saddest playlist right now. On the flip side, Thompson found that “15 Step,” “Feral”, and “Bodysnatchers” scored high in the “happy” category. So, not all hope is lost.

Revisit “True Love Waits”, “Motion Picture Soundtrack”, and “Give Up the Ghost” below.