Instead of publicly condemning the rising number of hate crimes perpetuated against people of Jewish and Muslim faith, this week President Donald Trump used his Twitter account to fight Snoop Dogg. In case you missed it (and be glad if you did), Snoop’s latest video features a scene in which he mock shoots a clown who looks much like the 45th president. Instead of just ignoring it as grown up world leaders would do, Trump took the bait and tweeted, “Can you imagine what the outcry would be if Snoop Dogg, failing career and all, had aimed and fired the gun at President Obama? Jail time!” This prompted fellow rapper Bow Wow to enter the fray, and things went from bad to worse. “Ayo @realDonaldTrump shut your punk ass up talking shit about my uncle @SnoopDogg before we pimp your wife and make her work for us,” Bow Wow tweeted.

Trump has yet to respond to Bow Wow (I can’t believe I just wrote that), but members of the Conservative media are already fighting back. On a recent episode of FOX News’ The Five, Greg Gutfield mocked Bow Wow’s various nicknames by calling him “Little Shad” and “Knee Pad Shad” (a homophobic joke, hey-o!). Meanwhile, asked what the Secret Service should do, Kimberly Guilfoyle twice responded, “kill them.” She added, “I think it would be fantastic if they got a visit from the Federal Marshals and then let’s see how tough and gangster they are now.” 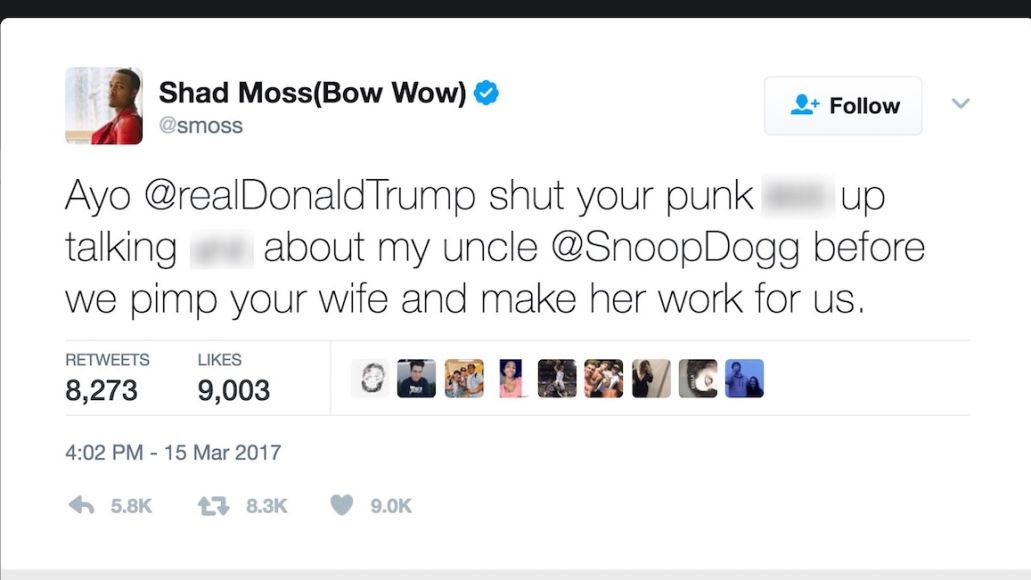 A truly proud time to be an American.