The beloved cast of The Fresh Prince of Bel-Air reunited earlier this week, sending nostalgic ’90s babies everywhere into a frenzy. However, not everyone was pleased with the reunion photo seen around the world: Janet Hubert, who played matriarch Vivian Banks for the show’s first three seasons yet was conspicuously missing from said viral picture, trashed her former cast mates in an angry tirade posted to Facebook.

“I know the media hoe Alphonso [sic] Ribero has posted his so called reunion photo,” she wrote (via Variety). “Folks keep telling me about it. He was always the ass wipe for Will. There will never be a true reunion of the Fresh Prince. I have no interest in seeing any of these people on that kind of level.” 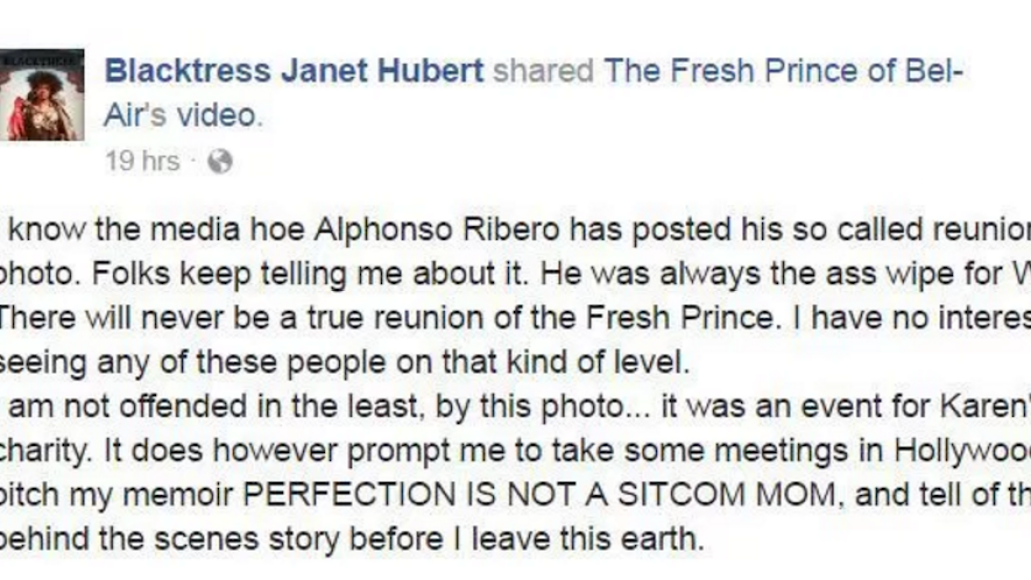 “I am not offended in the least, by this photo… it was an event for Karen’s charity,” she added. “It does however prompt me to take some meetings in Hollywood to pitch my memoir PERFECTION IS NOT A SITCOM MOM, and tell of the behind the scenes story before I leave this earth.”

Hubert published Perfection is Not a Sitcom Mom in 2009 as something of a tell-all/cautionary tale for those looking to get into showbiz. Per a synopsis:

“Then came the chance to become a sitcom mom on what would become one of the most successful TV sitcoms of the 90s, THE FRESH PRINCE OF BEL AIR. Sounds like the perfect script for the perfect Hollywood ending, right? Well not exactly. So you want to be a star Have a read and you just might change your mind. I invite you to read my personal journey, I hope it will inspire you the reader to always remain true to your name.”

After portraying the original Aunt Viv for three years, Hubert left the series in 1993, and not on good terms. A feud between Hubert, Will Smith, and network officials was reportedly to blame. At the time of her departure, Smith commented, “I can say straight up that Janet Hubert wanted the show to be The Aunt Viv of Bel Air Show.”

Hubert addressed the decades-long Fresh Prince beef in a video last year, saying that Smith was unwilling to help her and others on the show during salary negotiations with NBC. “[We thought] your influence would help us greatly, like they did on Friends,” she said. Instead of having her back, Hubert claimed Smith replied: “My deal is my deal, and y’alls deal is y’alls deal.”