Dusting ‘Em Off is a rotating, free-form feature that revisits a classic album, film, or moment in pop-culture history.

“The magic is back!” That’s all it took to sell audiences on 1989’s Lethal Weapon 2, namely because everyone knew exactly what magic Warner Bros. was selling. It wasn’t just more explosions, more one-liners, more chase sequences, or more villains. It was a complete package of dynamite that had been delicately wired together and left under everyone’s toilet two years prior by director Richard Donner, producer Joel Silver, and then-rookie screenwriter Shane Black. A package that was executed to perfection by the unlikely, albeit lovable, chemistry of stars Danny Glover and Mel Gibson, who were all the studio ever needed to sell the picture, as best exemplified by the sequel’s poster, which, once more, only featured their two iconic mugs and their subtly dangerous grins: 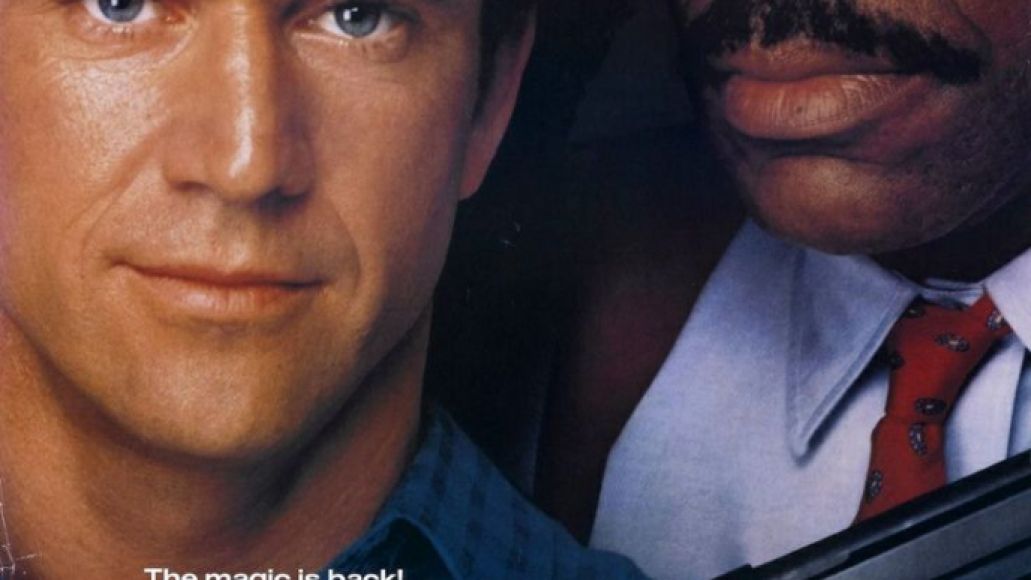 But it wasn’t the novelty of seeing Gibson and Glover together on the silver screen that brought millions of popcorn-loving moviegoers to theaters throughout the late ’80s and into the ’90s. No, it was the idea of reuniting with Martin Riggs and Roger Murtaugh, two heartwarming, rag-tag heroes who were smartly designed by Black and had quickly become the cinematic equivalent of a longtime drinking buddy you love to call up. Because let’s be real, the buddy cop comedy was already a tired model by 1987, put in a choke hold like Gary Busey’s Mr. Joshua, thanks to popular TV procedurals like Miami Vice and previous box office hits like 1982’s 48 Hours, 1984’s Beverly Hills Cop, and 1986’s Running Scared. Hell, that year alone saw the return of Axl Foley in Beverly Hills Cop II and the start of another buddy cop franchise in the very successful Stakeout.

What’s always separated Riggs and Murtaugh from the rest of the wild bunch is how they weren’t strictly relegated to the predictable formula of two witty cops defined by their race or social standing. Instead, Black drew up two relatable human beings united by their love for the job yet distinctive for their respective lots in life — and the film’s hardly subtle about that conceit. Within the first 10 minutes, Black’s razor-sharp screenplay paints essential portraits of both heroes from which the film builds upon. Glover’s soft-spoken Murtaugh is first seen in a rather vulnerable position, sitting in a steamy bathtub, where he’s basking in the morning silence. This sanctuary is compromised by his chummy family, who surprise him with a candle-lit birthday cake for his 50th birthday. Jovial barbs are tossed, kisses are shared, they’re happy, he’s happy — this is the American dream.

Riggs, on the other hand, is introduced by his dog, who runs back from the beach and toward a tiny motor home that’s enjoying a beautiful Los Angeles morning by the Pacific Ocean shoreline. Inside, Riggs is still in bed, smoking a cigarette to the sounds of Family Feud, his trademark blue eyes covered by a hairy arm, his gun nestled beside him under a pillow like a tired lover. When he finally stirs, we discover he’s naked, living alone, and absolutely miserable. He tosses his dog a treat that’s been sitting on the counter, grabs a Coors, takes a leak, and swigs his beer, the suds rolling down his chin as he stares into the nothingness of his inner nihilism. This is the American nightmare, one that Donner and Black continue to wisely juxtapose against Murtaugh’s family life, where our more stable hero conversely drinks juice, takes his vitamins, and embraces his wife.

From there, Black deftly sets the table with a series of tense vignettes that flesh out this world: Rabid Riggs pops up for the first time when a Christmas tree coke bust goes south; Riggs attempts to commit suicide at home as he weeps over a portrait of his dead wife; Captain Murphy (Steve Kahan) brutally dismisses Dr. Stephanie Woods’ (Mary Ellen Trainor) psychological report on Riggs as a “bunch of psych bullshit”; Murtaugh realizes “he’s too old for this shit” after he’s held at gunpoint by his new “lethal weapon” of a partner; and finally, we meet the real villain, Busey’s aforementioned Mr. Joshua, who exhibits his true prowess exactly at the 25-minute mark when he unflinchingly takes a lighter to his arm that’s being held by his co-conspirator Gen. Peter McAllister (Mitchell Ryan). It’s very tight, very precise, and very muscular storytelling that runs like clockwork.

What’s telling at this point is how the mystery takes backseat, even despite the fact that said mystery opens the film (i.e. the whole bit where the nude, buxom blonde dives off a high-rise balcony), and that’s because Black places character first. It’s a smart decision and by focusing on the two heroes — their morals, fears, instincts, ambitions (or lack thereof) — there’s an inherent weight that’s lifted from the proceedings because everything else has become secondary. So, if you’re not hooked after the respective meet and greets with Riggs or Murtaugh, you probably won’t care for Lethal Weapon, and that’s more or less the uncompromising beauty of Black’s writing. Because once you believe in these two heroes, the world around them starts twisting and turning like a great roller coaster, and that’s a ride Donner had already long trademarked.

Prior to working on Lethal Weapon, Donner’s resume included chills and thrills like 1976’s The Omen, 1978’s Superman, 1985’s The Goonies, and 1985’s vastly underrated Ladyhawke. In other words, the guy had all the right chops going into the buddy cop comedy, and those skills played a key part in turning the film into a decade-long franchise. The proof is in the production, from the sweeping, overhead shots that capture the scope and beauty of Los Angeles to the more intimate angles that sit you right next to Riggs and Murtaugh as they share a beer over an innocuous discussion about boats. By then, Donner had a knack for whimsy, what with the capes and pirates behind him, and his innate ability to double-down on the more emotional moments with patience and tranquility is largely why Black’s dour story managed to connect with so many viewers.

Though, the film wouldn’t have worked without either party. After all, Black’s original screenplay was deemed too dark and disturbing, even after he tweaked the script alongside Silver, and it wasn’t until Donner brought in screenwriter Jeffrey Boam to add a little levity to the action that the film became what we recognize today as Lethal Weapon. Which is to say, a film that’s willing to have fun without letting go of the severity at hand. That’s a tall order for any filmmaker or screenwriter to juggle and one that too many films have fumbled in the years before and after this film. (One might argue its sequels struggled with that balance, beginning with Lethal Weapon 2, and they wouldn’t exactly be wrong.) But Black and Donner found a perfect marriage between dark drama and punchy comedy, and it all goes back to how they sold their two leading men.

Long before the ludicrous hurdles that would come to define them in future installments — you know, awesome stuff like this, this, or this — Riggs and Murtaugh were 100% human, and their heroics weren’t insistent upon the injuries they sustained and the blood they lost. What made them so alluring in the first film is how they wrestled with tangible issues that were above and beyond their pay grade. This notion comes to a boiling point early on in the original when Murtaugh starts to understand the card he’s been dealt as he watches his partner jump off an apartment building in order to bring down a suicidal man. Flabbergasted, he pulls an all-too-smarmy Riggs into an abandoned shop and prods him: “You wanna kill yourself? Yes or no? You wanna die?” It’s really the first time we see Murtaugh lose his cool and by far the most impacting because he’s terrified.

Riggs’ response is even better and elicits some of the strongest acting between the two leads, as he opens his heart up: “Well, what do you wanna hear, man? Do you wanna hear that sometimes I think about eatin’ a bullet? Huh? Well, I do! I even got a special bullet for the occasion with a hollow point, look! Make sure it blows the back of my goddamned head out and do the job right! Every single day I wake up and I think of a reason not to do it! Every single day! You know why I don’t do it? This is gonna make you laugh! You know why I don’t do it? The job! Doin’ the job! Now that’s the reason!” Murtaugh, not believing a word of it, tries to call his bluff by egging him on, to which Riggs obliges, pulling the gun closer to his head. Donner brilliantly zeroes in on the hair trigger, and though we know he won’t pull it, we agree with Murtaugh when he says: “You really are crazy.”

What’s more, we empathize with the guy, because we’ve already seen everything that Murtaugh has at stake, all of which he hilariously addresses in the next scene while driving with Riggs: “50 years old, what a birthday, goddamn 50 years old, been on the force 20 years, not a scratch on me, not a scar, got a wife, kids, a house, a fishing boat, but I can kiss all that goodbye because my new partner has a death wish, my fucking life is over.” Naturally, Riggs diffuses the situation with some humor, and the two strike up a friendship. Though, much like Black and Donner’s working relationship behind the scenes, the two also bridge their respective ideologies: When Murtaugh opens his life up to his partner, inviting him over for dinner, you start to see the humanity of Riggs, and realize he’s kind of a softie. On the flip side, his crazy ways slowly rub off on Murtaugh.

Yet, crazy is the highest form of currency in the world of Lethal Weapon and what would inevitably fuel the three following sequels. Except, unlike the original, the craziness would come strictly from the characters’ divine endurance and how far they were willing to go to take down a couple of bad guys. Granted, this led to some of the greatest scenes of all time — including the most badass kill of a South African diplomat — but nothing would ever be the same. Because really, if you actually break down the original film, by far the most outstanding sequence is the asinine brawl between Riggs and Mr. Joshua that takes place on Murtaugh’s lawn. Between the roaming helicopter, the broken fire hydrant, and the complacent LAPD spectators, the whole thing looks like something out of Street Fighter 2. It’s the only time you might smirk and say, “This is fucking bananas.”

But it’s earned, and the later feats are earned, because it’s all a part of that Lethal Weapon magic: hyper-masculine action that thrives from a little self-awareness (and lots of laughs), some sultry jams by the late Michael Kamen (feat. Eric Clapton), and a motley crew of characters (future alumnus: Joe Pesci, Rene Russo, and Chris Rock) who are always open to trusting the impossible. Perhaps that’s why Black sets his hard-boiled stories around Christmas, a time of the year when we’re supposed to believe in the impossible, whether it’s in the good of humanity, the hope of a brighter future, the mythology of a supreme, all-seeing being like Jesus Christ, or the idea that one man might be able to save the day by running after a car on foot across a Los Angeles freeway, waving around a semi-automatic, with a Beretta in his waistband and vengeance on his mind.

Call me crazy, but we’re never too old for that shit.