“I think what’s exciting about playing a villain—particularly a villain who’s totally unapologetic about their evil intentions—is that it’s not anything remotely like what you get to do in real life,” actress Bryce Dallas Howard once said. “You’re never allowed to be evil and not feel bad about it afterwards, let alone be evil, period.”

And isn’t that why everyone loves a good villain? Because, to some degree, they function as a kind of fantasy figure? This goes double for action movies, when the villains often get to be the meanest, most brilliant and bloodthirsty people in the room. But those roles typically go to dudes, whether they be big and bullying (like Bennett in Commando) or bookish and scheming (like Travis Dane in Under Siege 2). 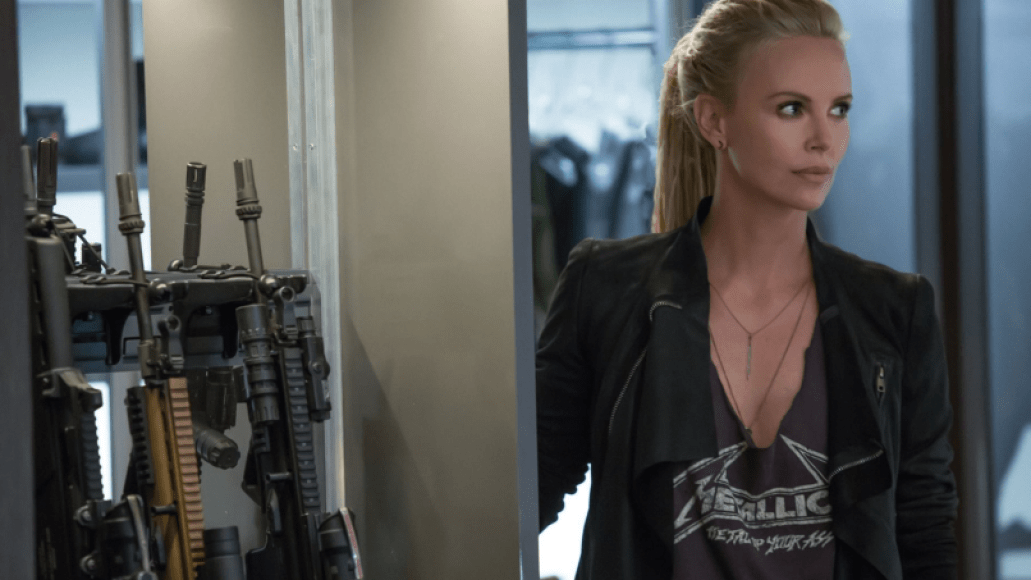 This weekend, however, a woman gets to serve as the main antagonist of one of the biggest action franchises in the world. In The Fate of the Furious, Charlize Theron plays Cipher, a master hacker with enough charm to turn Vin Diesel’s Dominic Toretto against his Fast family. How does she do it?

While women have played memorable villains across any number of genres, it’s in action that they’ve perhaps made their biggest impact. That’s why we’ve compiled a few of favorites here, focusing specifically on the action genre. Some are sociopathic, some are sadistic, and some are quietly nursing a heart of gold. But what they all are is lethal. 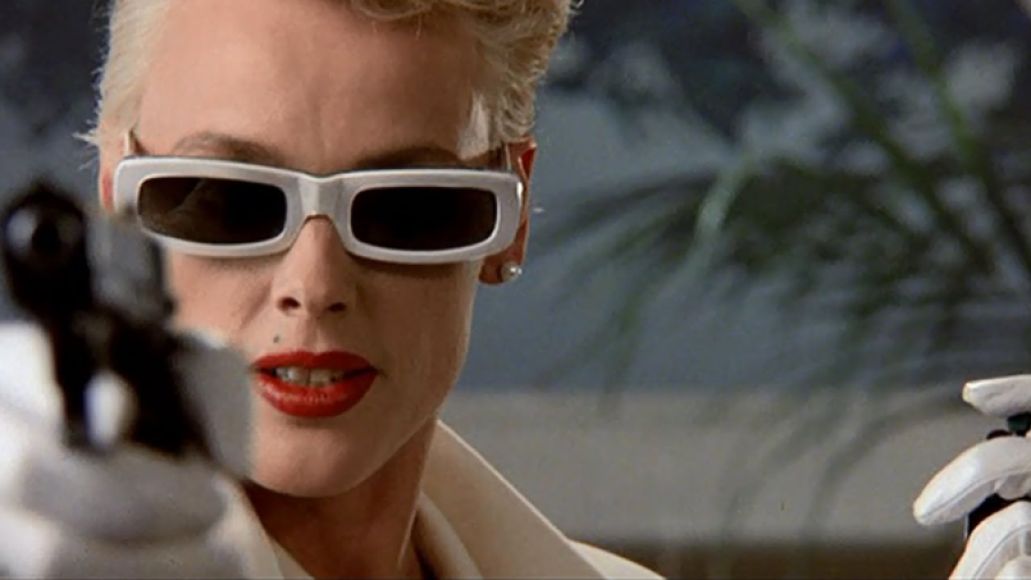 Who is She? She may be the chief “henchwoman” of Jürgen Prochnow’s nefarious businessman Maxwell Dent, but it’s pretty clear she’s running the show. As Dent kicks back in his office, Karla is executing the Alphabet Crimes, a series of methodical, high-profile heists designed to help her boss reap lucrative insurance windfalls.

Distinguishing Marks: Despite standing over six feet tall and sporting a neat crop of bleached blonde hair, Karla is still somehow a master of disguise, with each character she plays as sartorially striking as the last. A hushed, tightly wound Russian accent.

Best Kill: Her ruthless headshot of colleague (and patsy) Chip Cain (Dean Stockwell) is both a sign of her efficiency and a testament to her coldheartedness.

One-Liner: A woman of few words, Karla speaks sparingly and with purpose. She’s also not one for clever parting lines. A cold, simple, “Goodbye,” is all she cares to muster for those in her crosshairs.

Fate: Gunned down by Detective John Taggart, who follows her death up with a condescending, “Women!” A shame she wasn’t able to squeeze out one final shot as retribution for that one.

How Evil Is She? Much more so than Dent, who is all but eclipsed by her character. Karla’s coldness extends to even her most benign of conversations; she barely even musters a smile upon meeting Eddie Murphy’s Axel Foley for the first time, though you can’t really blame her after he almost immediately makes with the sexist remarks (“How long does it take to shave those legs?” he asks). Not even a criminal mastermind is immune to misogyny. 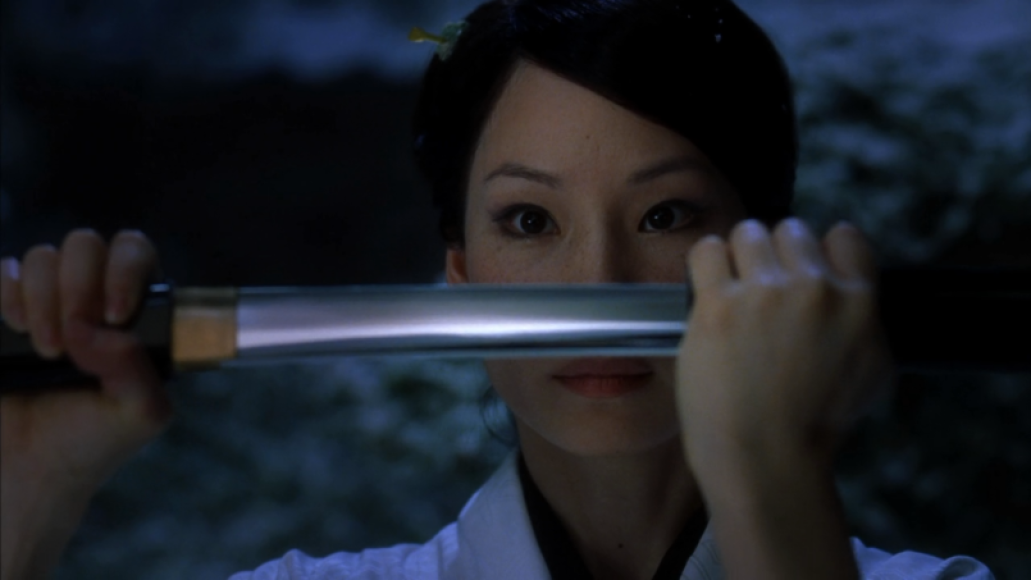 Who is She? A member of the Deadly Viper Assassination Squad (codename: Cottonmouth). Alongside Vernita Green, Elle Driver, and Budd, O-Ren was responsible for the Massacre at Two Pines that slaughtered the friends and family of former colleague Beatrix Kiddo. In the following years, she went on to form the Crazy 88 and usurp the Yakuza as the leading crime faction in Tokyo.

Distinguishing Marks: Demure, yet fierce. As leader of the Crazy 88, she favors flowing kimonos—director Quentin Tarantino modeled her dress after Lady Snowblood from the popular Japanese manga of the same name.

Best Kill: In a flashback, we witness the revenge O-Ren took against the Yakuza boss who killed her parents. She disembowels him with such force that his teeth shatter his mouth and his blood washes over both O-Ren and the room in a violent spray.

One-Liner: “The price you pay for bringing up either my Chinese or American heritage as a negative is I collect your fucking head.”

Fate: Partially decapitated by Beatrix Kiddo during a snow-dusted swordfight.

How Evil Is She? O-Ren isn’t evil so much as she is callous. Having endured such trauma as a child, O-Ren sacrificed much of her soul in the pursuit of self-preservation and, eventually, power. Her goal isn’t to bring pain upon the world so much as it is to build an empire where no one can ever hurt her again. Deadly Viper Assassination Squad cohort Elle Driver was the true force of evil in Kill Bill, while O-Ren was, of the film’s female killers, the most elegant, efficient, and resourceful. 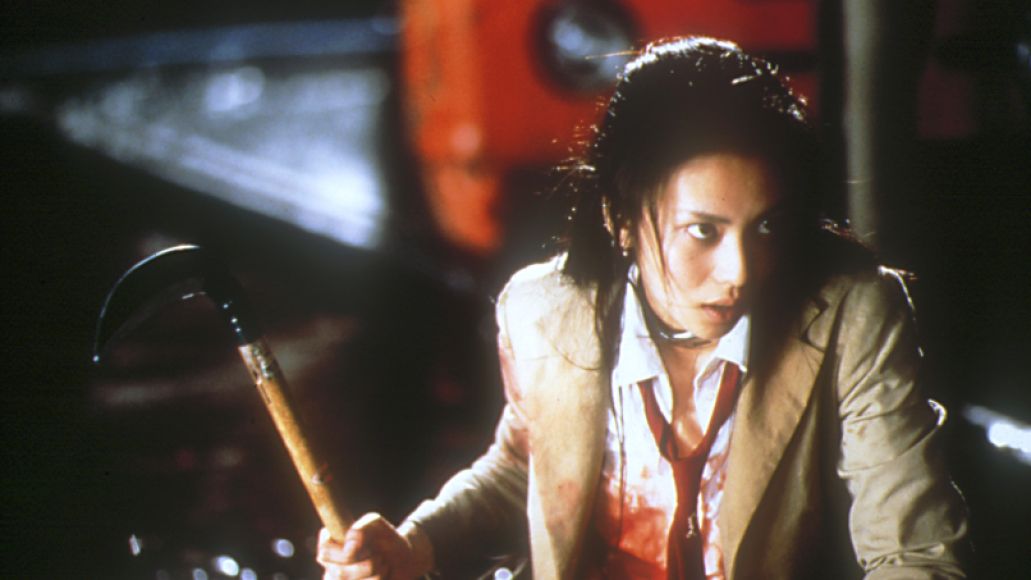 Who is She? A popular girl who nevertheless longs to never be a loser, Matsuko came up in a sexually abusive home and, once becoming a teenager, began exercising her own blooming sexuality as a force of power. She’s really the only female in Battle Royale to fully embrace The Program and, aside from the two “transfer students,” is by and large the deadliest student among the bunch.

Distinguishing Marks: Tall, lithe, and beautiful, but with a vampire’s smile.

Weapon of Choice: She swaps between several weapons throughout the film, but it’s the sickle she was given in her pack that seems closest to her heart.

Best Kill: The first kill of hers we see (and we see several) finds her decimating the throat of young Megumi Eto, who she had just lulled into a false sense of comfort. Gore jets furiously from the girl’s neck, serving as a fine introduction to Matsuko’s bloodlust.

One-Liner: “Why not kill? Everyone has their issues.”

Fate: Gunned down with both an uzi and a Colt M1911 by deadly hunk Kazuo Kiriyama.

How Evil Is She? Matsuko is fascinating in that she’s introduced as a monster—she literally asks permission to enter Megumi Eto’s cabin, just like a vampire—but slowly culls empathy through her tragic backstory and open-wound emotions. Yes, she’s evil, but she’s also profoundly damaged and, as the film shows up, certainly not the worst of the film’s many villains.

A VIEW TO A KILL 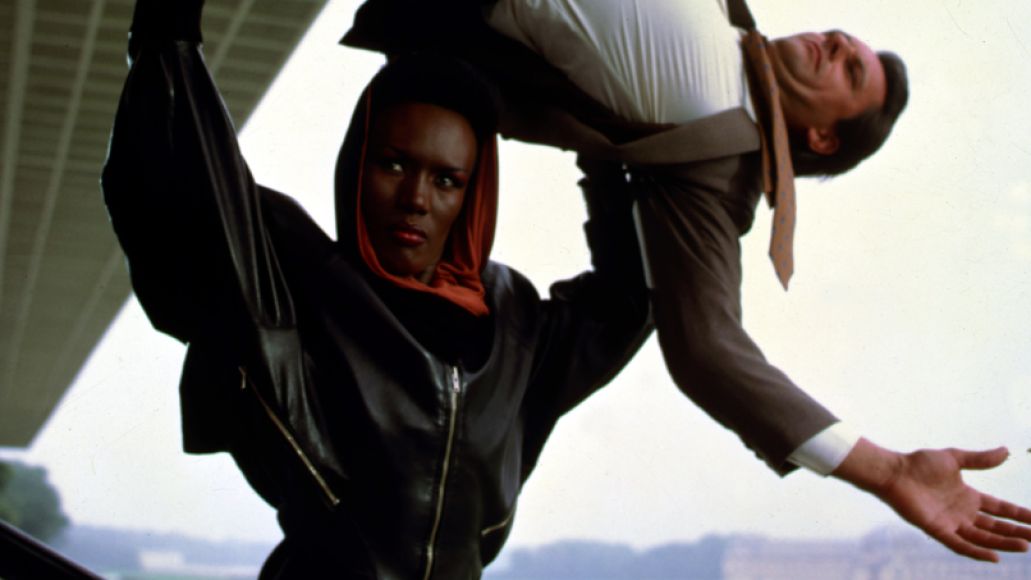 Who is She? The bodyguard of villainous industrialist Max Zorin, May Day leads an all-female team of guards. She’s also a creative assassin, at one point using a poisoned stage prop (a wired butterfly) to dispatch a target.

Distinguishing Marks: Leather jacket, red lipstick, and a tight square of black hair atop her head.

Weapon of Choice: Her bare hands. She literally has superhuman strength.

One-Liner: “I see you’re a woman of very few words,” Bond says to her. Her response? “What’s there to say?” Perfection.

Fate: In an act of sacrifice, May Day explodes with Zorin’s bomb, thus putting a stop to his master plan.

How Evil Is She?: May Day may be lean and mean, but she’s also just a big softie. Sure, she’s got a killer’s instinct, but a broken heart is all it takes to make her turn on Zorin. In the end, she’s the one who truly saves the day by sacrificing herself in order to prevent the flooding of Silicon Valley. 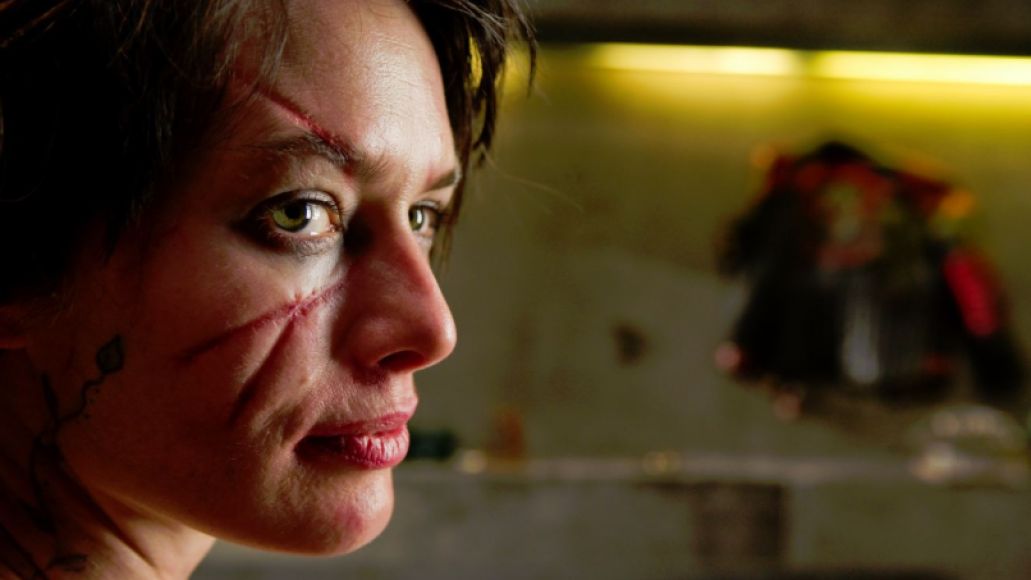 Who is She? A former prostitute who bit off her pimp’s dick before founding her own gang, the Ma-Ma Clan, and exerting control over the entirety of the notorious Peachtree Block complex. Now, scarred and sadistic, she peddles a drug, Slo-Mo, to the building’s 75,000 citizens.

Weapon of Choice: Her henchmen, who she orders to commit inhuman acts of violence. Though she herself won’t hesitate to gouge out someone’s eyes with her thumbs.

Best Kill: Though she doesn’t do it herself, Ma-Ma orders her gang to skin three rogue drug dealers alive, then have their bodies dropped from the 39th floor of the building into the atrium.

One-Liner: “Somewhere in this block are two Judges. I want them dead. Until I get what I want the block is locked down. All clan, every level, hunt the Judges down. Everyone else, clear the corridors and stay the fuck out of our way until the shooting stops. If I hear of anyone helping the Judges, I will kill them and the next generation of their families.”

Fate: Dropped 200 stories to her death.

How Evil Is She? Ma-Ma used to feel. In her youth, she had a close friend in Eddie, but his death at the hands of her once-pimp curdled whatever humanity she had into pure hatred. Now, her sense of self-preservation trumps everything, a fact made all the clearer once she uses a trio of mounted Vulcan cannon miniguns to take out Judge Dredd, killing numerous innocent citizens in the process. She doesn’t bat an eye at their slaughter. 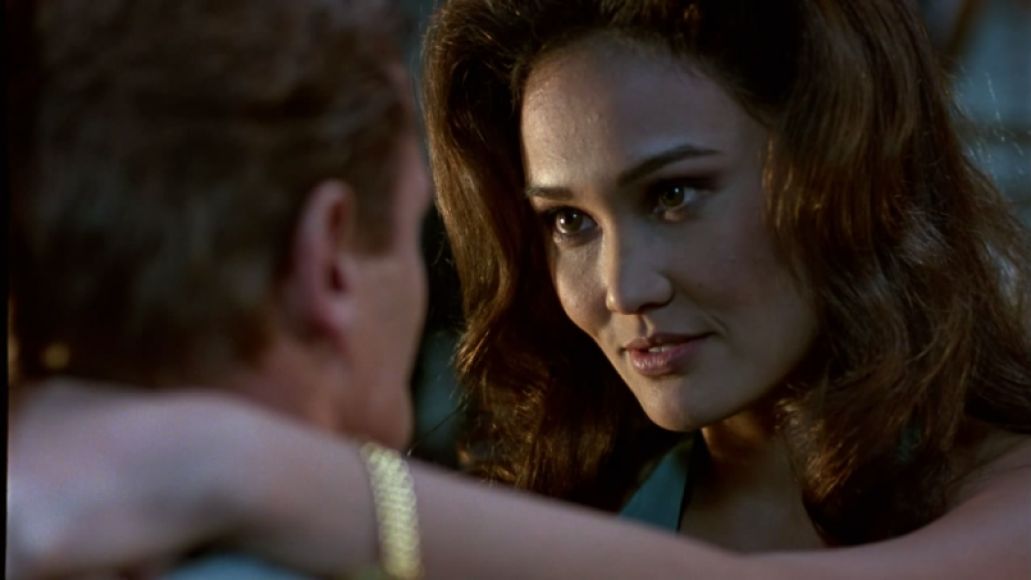 Who is She? An arts and antiquities dealer who helps smuggle nuclear arms through ancient artifacts for terrorist ringleader Salim Abu Aziz.

Weapon of Choice: Her formidable charm.

Best Kill: Being that she’s no enforcer, Juno’s only kill comes by accident. During a tussle with Jamie Lee Curtis’ Helen Tasker, her gun accidentally goes off, splattering the brains of her driver against the front windshield.

One-Liner: “What, you think I care about their cause? Or yours? Not at all.”

Fate: Pummeled with a champagne bottle by Helen, then left in a runaway limo to sail off a shattered bridge into the ocean.

How Evil Is She? Perhaps the greatest evil is to have no convictions, to sell yourself to any cause without once considering the consequences. When asked why she’s helping a group of “raving psychotics” smuggle nuclear weapons, thus inviting the downfall of an entire country, she replies, “Because they’re very well funded raving psychotics! And I’m getting a lot of money.” Juno first presents herself as a morally complex femme fatale, but soon proves to be driven by nothing more than greed.

DIE HARD WITH A VENGEANCE 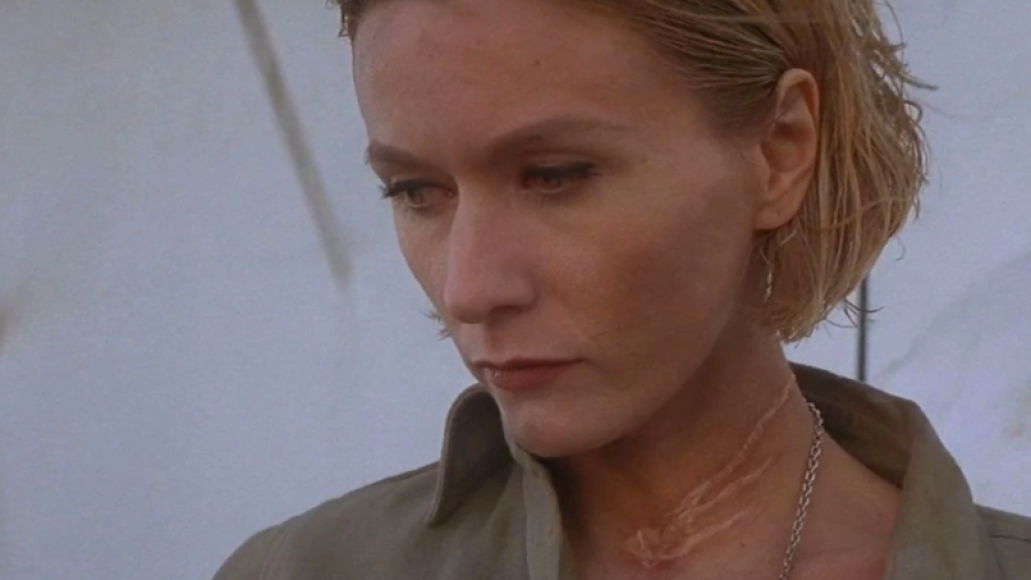 Who is She? The mysterious henchwoman of Mathias Targo and Simon Gruber, Katya serves as muscle during their $140 billion heist of the Federal Reserve Bank. Though she’s romantically linked to Targo, she and Simon become lovers and double-cross him.

Distinguishing Marks: Scars along her neck and chest, a mean smirk, and dead, dead eyes.

Best Kill: Cutting the throat and promptly disemboweling the Federal Reserve security guard in the film’s most brutal burst of violence.

One-Liner: That smirk says everything.

Fate: Electrocuted by a falling power line while in a crashing helicopter.

How Evil Is She? Mute killers often ride on an inherent oddness or charisma—think of Crispin Glover’s Thin Man from Charlie’s Angels—but Katya is clearly too sociopathic to embody quirks of any kind. Cold and calculating, Katya is a killing machine that thrives on misdirection and subterfuge. Perhaps there’s some humanity to be found in her relationship with Simon, but she barely even seems to register the sex they’re having during the film’s epilogue. In this case, evil is emptiness. 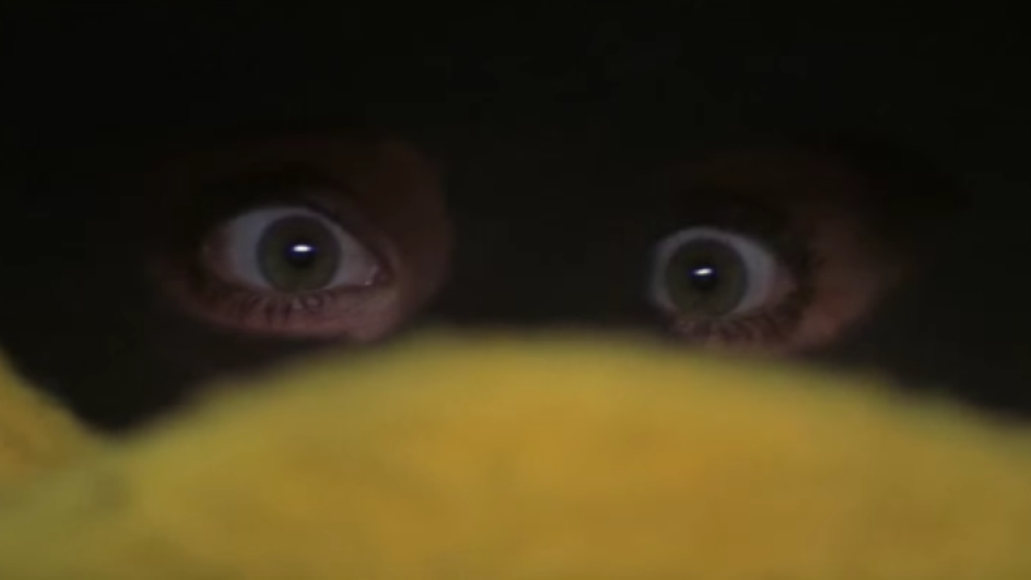 Who is She? A member of the terrorist faction led by Joshua Foss (Powers Boothe), who takes the Vice President hostage during the Stanley Cup Finals. She disguises herself as the Pittsburgh Penguins’ mascot, Iceburgh, then kidnaps the daughter of firefighter Darren McCord (Jean-Claude Van Damme).

Weapon of Choice: A pistol, ideally, but she can work wonders with a meat cleaver or tenderizer.

Best Kill: Carla swiftly and efficiently kills a few red shirts, but it’s her fight scene with McCord that stands out. Who else could execute such a clean karate kick while in that costume?

One-Liner: That scream when her hand falls into the bubbling, scorching fry cooker.

Fate: Strangled and suffocated after getting pulled into the industrial dishwasher.

How Evil Is She? Anybody who could dress up like that penguin and not feel true and utter joy is evil as fuck. Also, she, like, kidnaps kids. Not a good egg.

Why Not Kill? A Guide to the Greatest Female Action Villains