Caution: This article contains major spoilers for Guardians of the Galaxy Vol. 2.

One of the best things about storytelling is that it offers a chance to walk in another person’s shoes, to step outside of oneself and have experiences that are not possible in most people’s day-to-day lives. But films, television shows, and novels also offer fantasy; they offer escapism and the chance to live out an existence, in two-hour chunks, that is wilder and more fantastical than our own. Some of our culture’s most prominent stories present a particular, alluring version of that idea — the fantasy of the ordinary person discovering that they are, in fact, more special than they ever could have known.

When Luke Skywalker gazes out at the twin suns of Tatooine, the sight evokes his longing for adventure, the unshakable feeling that the universe has more in store for him than just the inner workings of a moisture farm. When we meet Harry Potter living under the thumb of the Dursleys, it’s to establish the lowliness of his position, the improbability that the boy who lives under the stairs could, in reality, be the chosen one. And Guardians of the Galaxy Vol. 2 presents its own orphan protagonist in Peter Quill who, after a lifetime of hoping and wondering, discovers that he too is more powerful and unique than he had ever imagined.

In that, Star-Lord follows in a proud tradition. The first Guardians film garnered plenty of comparisons to the original Star Wars movie. In that vein, it’s not hard to draw a line between Guardians 2 and The Empire Strikes Back. Both movies split up the familiar heroes from the last adventure in order to develop them and introduce some new faces. Both reveal the hero’s parentage in a way that challenges what the main character thought he knew about his past and his destiny. And most importantly, both feature a son rejecting his father’s offer to rule the galaxy.

But what sets Guardians 2 apart is how it ultimately moves in a different direction than Star Wars or Harry Potter or the many other works that followed their lead, when its hero discovers that he has a special destiny. Peter Quill is someone who, like Luke and Harry, grew up not knowing much about his parents or how he fit into the world. The difference is that when he uncovers the answer to these questions, when he’s faced with the wizened, bearded man (why are they always wizened and bearded?) who tells him about where he came from and what destiny lies within his grasp, he turns it all down in favor of the life he already has.

That is quietly revolutionary and a subtle inversion of these grand myths that are practically hardwired into the cultural firmament. Luke never seems too wistful about his former life with Uncle Owen and Aunt Beru on Tatooine. Harry’s relationship with his own Aunt and Uncle grows more complex as the series goes on, but his visits “home” tend to function more as reminders of how his old surroundings do not suit the ways in which he’s changed and underline his frustration at how the people he used to know don’t recognize that he is something different, something better now.

And yet, when Peter Quill is faced with his erstwhile destiny — when he is told that he possesses certain qualities and an unfathomable distinctiveness that make him one in a trillion — he stops and remembers the events that led him to this point. He reflects on the life that he’s lived until now, filled with the dear, regular folks whom his father tells him he is superior to. The memories come flooding back, a rush of images of those in his life who have cared for him, taught him, laughed with him, and loved him. He sees the human mother who raised him, the surrogate father who trained him, the motley crew of friends who’ve supported him. All the destiny, all the potential, all the uniqueness in the galaxy is not enough for him to be willing to give that up.

That is what is so subtly subversive about the second installment of the Guardians of the Galaxy franchise. Star-Lord is offered what he always wanted — a father to guide him, a place to belong to, and the sense that he is more than just a hardscrabble thief rambling through an indifferent universe. Like Luke and Harry, he is told that there is more to him than he ever imagined, that the unremarkable existence and uncertainty he once yearned to escape need not define or restrain him any longer.

Peter Quill is handed that chance for escapism — one of the most powerful fantasies our cultural myth-making machine has been able to muster — and he turns it down. He is given the choice to return to the humdrum (albeit galaxy-saving) life he knew or to embrace the boundless potential of a Celestial; to remake the universe in his own image or be just another countless inhabitant of it; in short, to be a human or a god. And in the face of all that, he chooses to remain an ordinary man. 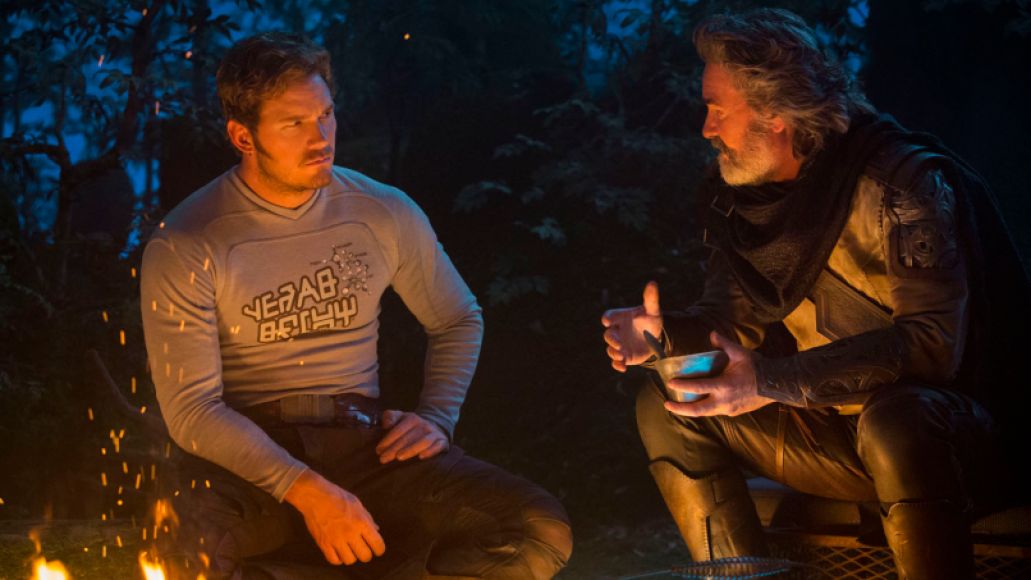 There is something powerful in that. The film lays it on a little thick, but to be given nigh-unlimited abilities and told after a lifetime of wishing that you are unique and different and to then choose the life you already had, the friends and family you already knew, is a quietly bold mark against that persistent fantasy.

It is comforting and easy to gaze out at the horizon and imagine that there is a world of adventure waiting out there for you. It is tempting to feel like the boy under the stairs and hope that your destiny lies beyond the walls that pen you in. It is harder to look around you, see the provincial facets of your life, the regular people you see every day, and realize that your strength, your happiness, and the person you are and were meant to be lies with them.

So often the stories we tell as a culture, even the best stories, seek to free us from the quotidian qualities of the day-to-day. It is the rare but potent film that instead sees the value in it, the way that those ostensibly prosaic connections have a power, an invigorating strength that outstrips the most fantastical supernatural promises and in a far more ordinary but no less remarkable way make our lives worthwhile.

How Guardians of the Galaxy Vol. 2 Rebukes Star Wars and Harry Potter