The set times for the 2017 edition of Lollapalooza have been released. As expected, there are plenty of decisions to be made as to which bands to check out on each of the four days. For fans at home, the multiple YouTube streams with on-demand playback might make things a little easier, but in the Windy City, you only have one shot. We’ve broken down the 10 biggest conflicts and made our suggestions for who to see.

But first, the schedule… 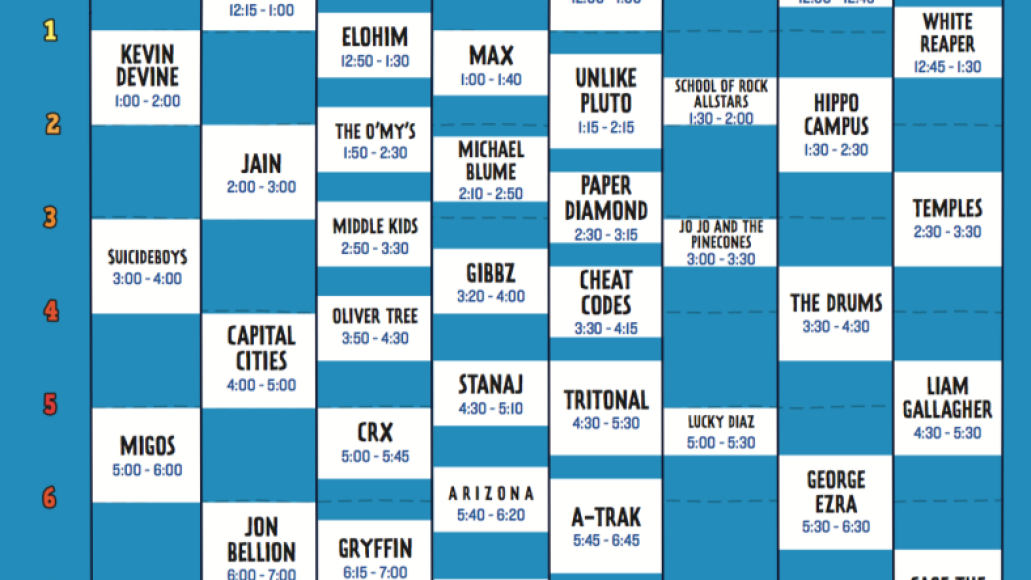 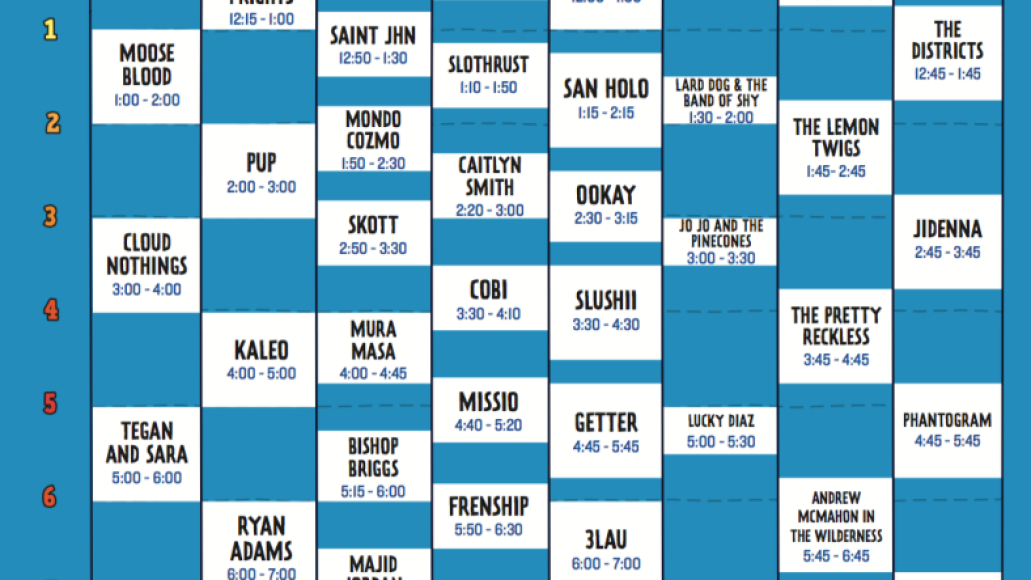 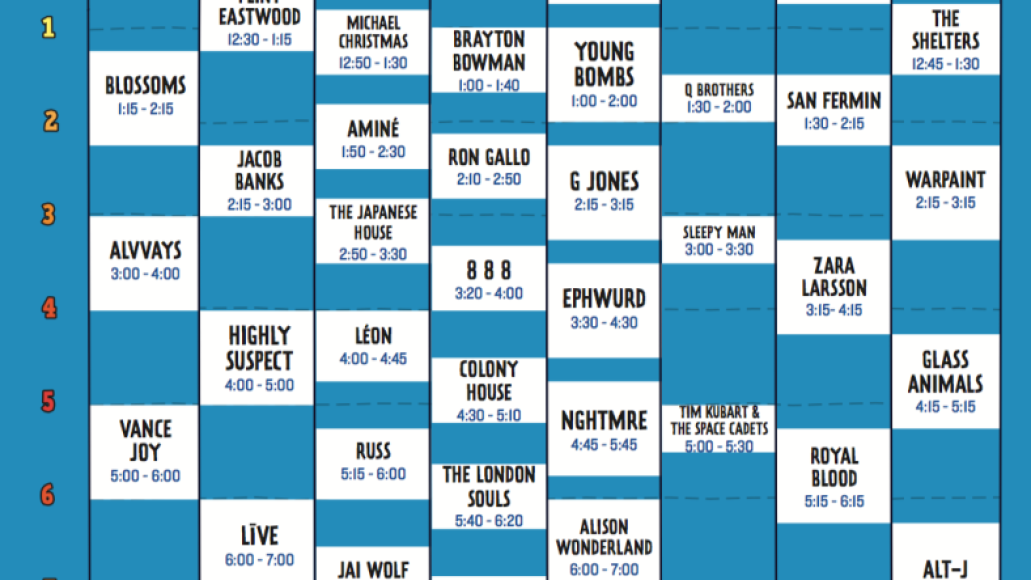 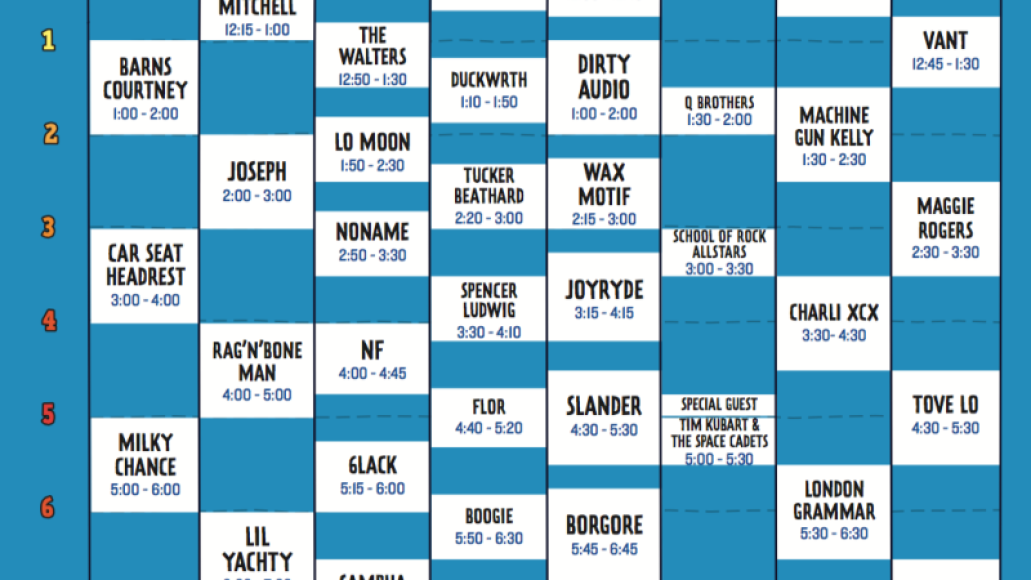 Talk about a conflict of mediocrity! Two of them aren’t even the original bands! Still, this one will probably turn a few fans’ stomachs into a pretzel, especially those who spent their college days listening to Hot Fuss and Take Off Your Pants and Jacket.

Our Pick: Don’t miss The Killers if you don’t have to, and judging from this lineup, you really don’t. Then again, if you’ve seen either of these acts in their respective heyday, an early trip home might suffice, too. –Michael Roffman

Sure, there wouldn’t seem to be a lot of overlap between soulful British songwriter Sampha, indie rock luminaries The Shins, and the polarizing young rapper Lil Yachty, but the ability to check out such disparate acts is exactly what music festivals are for. All three are supporting 2017 albums (Yachty’s comes out in a couple weeks) and only The Shins might be past their prime of the three.

Our Pick: Making your decision here might come down to placement for later, as Arcade Fire play after The Shins on the Grant Park stage. Still, for our money, Sampha has grown by leaps and bounds as a performer and promises to be the most well-rounded of the three, while Yachty will undoubtably be a madhouse. –Philip Cosores

This is another one that probably comes down to your taste preference, but both Car Seat Headrest and Noname produced a couple of our favorite albums of 2016, and Charli XCX is just a solid festival choice with a set stacked with a surprising amount of familiar songs.

Our Pick: If you haven’t seen Car Seat Headrest yet, well, where have you been? Will Toledo is getting better as a performer by the day, and is easily one of the most exciting young acts in rock. If you have seen him before, check out Noname, making the return to her hometown. –Philip Cosores

Somewhere, there is a hesher yelling “rock’s not dead” at the moon. But if guitars are going the way of the dodo, Lollapalooza didn’t get the message. Lookout for retro-rockers The Lemon Twigs competing with aggro Canadians Pup and rising alt-rockers Mondo Cozmo in the hot afternoon sun to hammer that point home.

While Lolla’s rock offering is certainly underscored this year, choices like Atlanta rapper 21 Savage, Durham synth-poppers Sylvan Esso, and trendy pop singer Banks certainly make the lineup more diverse than it would seem on first blush. So, of course, they put all three acts at the same time.

Our Pick: We’d suggest 21 Savage if he wasn’t performing in a virtual hellscape that is Perry’s. So go with Sylvan Esso, dance around, and meander over to The xx right afterward. –Philip Cosores

05. Tegan and Sara vs. Bishop Briggs vs. Phantogram

Out of all these conflicts, the crossover appeal in this particular tussle is very high, and those are always the worst to settle. Even worse, Tegan and Sara, Bishop Briggs, and Phantogram are all must-see acts, which makes this quite the conundrum.

One is a rap troupe that changed the game with their distinctive style and finally took their deserved throne at the top of the charts this year. The other is the singer from Oasis. Shit just got real.

Our Pick: While we’re deeply curious to see what a Liam Gallagher solo set looks like, Migos is gonna be one of the most insanely packed daylight sets of the weekend. It’s hard to pass that up, even for a legend. –Philip Cosores

03. Lorde Vs. Muse Vs. Porter Robinson Vs. Lil Uzi Vert

The question here is simple: Do you want to sing? Do you want to rock? Do you want to dance? Or, do you want to vibe? The genres are fairly split on this one, which makes the choice all the more easier. Basically, what song do wear like a badge on your Tinder profile right now? Be honest with yourself.

Our Pick: Lorde. Who the hell wants to miss her sing “Green Light”? Song of the summer, pal. –Michael Roffman

This one’s up in the air. If Arcade Fire have a new album out by summer, which all signs point to … maybe, then everyone will be at the Grant Park stage, where they’ll be showcasing their new collection of music just like they did back in 2010 with The Suburbs. Right now, that’s a big What If, and so the choice all comes down to timing.

Our Pick: If they’re not sporting new tunes, and it’s just a regurgitation of their Reflektor shows, then head to Justice for an all-out dance show to sweat the weekend off. Sorry, Rae. –Michael Roffman

01. The xx vs. Mac Demarco vs. Chance the Rapper vs. Kaskade

Odds are if you worship any of these acts, you also bow to Chance the Rapper. The enigmatic Chicago MC is like a young Yeezy in that his appeal is paramount, and that makes this choice incredibly difficult. Add to the fact that the latest offerings from The xx and Mac Demarco are quite good. Kaskade is also two years removed from a new album, which means he’s bound to drop something new any minute now.

Our Pick: Chance’s homecoming show is primed to be the stuff of legend and you’d be an absolute idiot to miss it. Sure, he’s headlining every goddamn festival this summer, but there isn’t a more important gig for him than this one. Topping the most celebrated day at Lollapalooza — ahem, Saturday — is a major notch on his marathon year following the release of Coloring Book and he’s absolutely going to deliver the goods. –Michael Roffman