This preview takes the first six episodes of season three into account. Spoilers may appear but have been tempered. Holy ham sandwiches!

A kidnapped eighth grader emerges from a doomsday bunker 15 years later to start her life anew. Sadly, that sounds like a story plucked straight out of a nightly news broadcast and surely not the premise of a hit Netflix comedy about to begin its third season. And yet, Unbreakable Kimmy Schmidt keeps on kicking – in light-up sneaks no less – largely cartwheeling past tragicomedy and landing in a handstand of an irreverent sitcom equal parts The Mary Tyler Moore Show, The Odd Couple, and a cut-to-gag cartoon of your choice. In the actual event of a religious cult member rejoining society, the focus would be on re-acclimating them to a normal environment. However, the genius of Kimmy creators Tina Fey and Robert Carlock is that they understand that there is no normal for Kimmy to return to, and the result is one of the sharpest and most hilarious send-ups of our daily culture out there.

Despite regular drop-ins from John Hamm, Fred Armisen, and David Cross, the comedic genius of Kimmy comes via the female regulars. There is Ellie Kemper’s adorable, ball-of-energy take on Indiana bumpkin Kimmy, who can go from high-five to Fudddgeee!!! in three seconds flat; fallen-from-penthouse trophy wife Jacqueline White (Jane Krakowski), forever on the verge of becoming a decent human being; and motherly landlord and lush Lillian Kaushtupper (the resplendent Carol Kane), who vows to never let gentrification or drinkable water darken her dilapidated New York neighborhood. Bolstered by occasional appearances by Tiny Fey and Amy Sedaris, the show draws from three generations of brilliant comediennes. Oh, and then there’s the fourth Golden Girl, the slobby, self-absorbed would-be diva Titus Andromedon (Tituss Burgess), one of those force-of-nature television characters who only comes around once in a rare while – or when there’s free food.

As a rapid-fire sitcom for the ADHD generation, each season of Kimmy relies on a very general arc to moves its characters along. After acclimating to New York City and putting her manipulative, troubadouring former captor behind bars in season one, the second season saw Kimmy get her GED and finally set things right with her deadbeat, coaster-enthusiast mother. In season three, Kimmy chooses to enroll in college to become a crossing guard, philosopher, or heroic sex worker (“thank you for your service”); in other words, like most of us, she’s undecided. While it’s amusing to see her spend a Friday out with her politically correct frosh friends practicing seventh wave feminism, the real promising development comes in meeting Perry, the one student in school who doesn’t act like a coddled child playing “adult” on mom and dad’s tuition check. But even if college fizzles out for Kimmy, fans can continue to delight in Titus taking professional strides as Sesame Street’s new Gordon, a hate-crime backup singer for hire, and a straight man (note: each of these gigs is far stranger than described here).

Kimmy exists in its own little world, one where newspapers still cover the Dong-size hole in the wall and Titus regularly admires the tape deck he found time-traveling at the city dump. But that doesn’t mean its characters aren’t aware of what’s going on outside of their little hamlet of East Dogmouth. When Titus suspects he’s being cheated on, he does what any betrayed lover would do: “go Lemonading.” A bit past its moment pop-culturally speaking, perhaps, but even Beyoncé might be sorry if she crossed Titus while he’s taking his “baseball stick” to a fire hydrant. We also see Lillian double down on the MAGA approach in order to win her election to District Council, pandering to her “basket of deplorables,” delegitimizing the “lamestream” media, and starting a “lock her up” chant when Jacqueline (who spent a year at Trump University – “Go Pricks!”) threatens to introduce a clean drinking water initiative to the neighborhood. It’s such a small part of the show’s material, but fans will continue to appreciate how the writers sparingly step outside the Kimmy bubble to land a worthwhile gag. 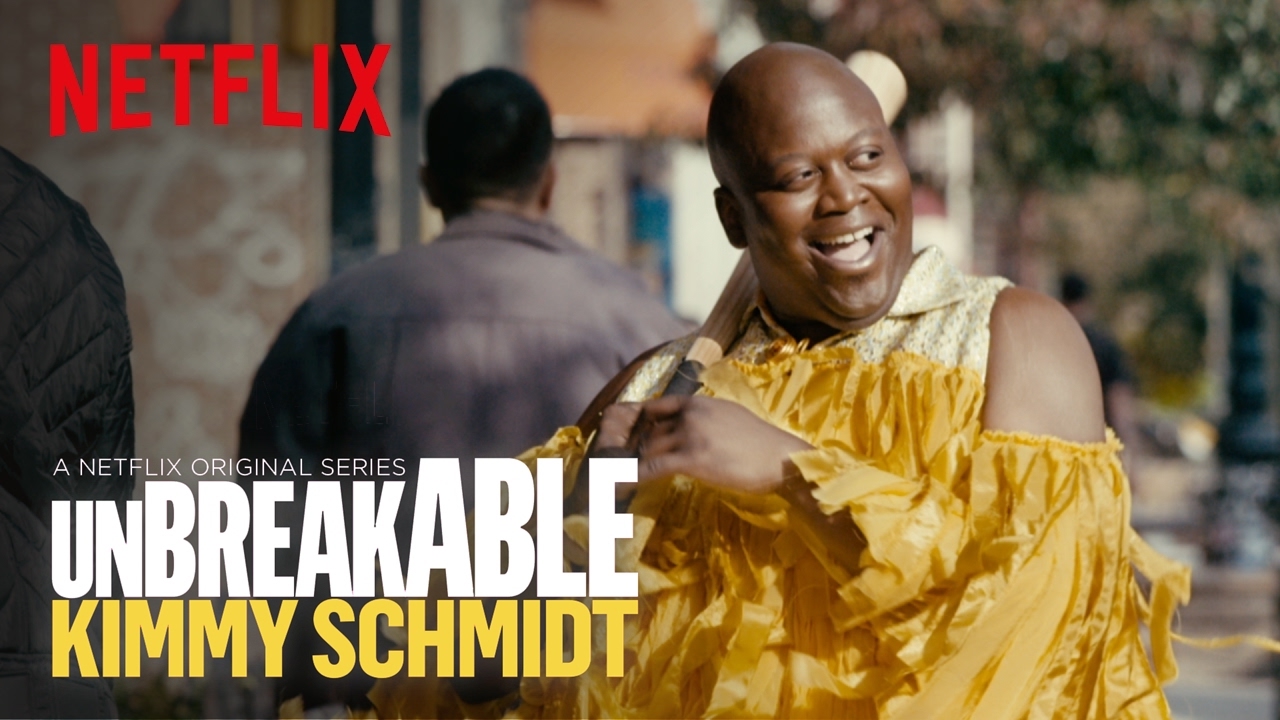 Kimmy is one of those shows you know you like or dislike immediately. There’s no need to give it a few episodes. Either its sight gags, goofiness, and wordplay are your thing, or they aren’t. And all is well on that front for season three. However, where fans might be concerned goes back to the situational part of sitcoms. Lillian’s political career, Titus’ quest for love (of all kinds), and Jacqueline’s mission to get the Washington Redskins to change their name to something more politically correct (The Prancers, Russ?) all have promise because they’re pushing forward into unknown territory. However, this season’s writers seemed hell-bent on forcing Kimmy back to the bunker by making Reverend Richard an early season focus, not letting Kimmy finally hang up her Mole-Mom apron, and even reintroducing a former adversary that has no reason to be back. That’s not to say the episodes that lean heavily on Kimmy’s brutally unfair past don’t still earn laughs, but it’s clear that there’s a limit to the bunker as a source of material. It feels like Kimmy has broken free, so why the need to raisin her cookie outside of occasional flashbacks?

Netflix bingers and tortoises alike can be assured that season three (at least the first half) of Unbreakable Kimmy Schmidt won’t disappoint. The writing remains electric, the characters irresistibly eccentric, and the social commentary biting in the sweetest way possible. As unlikely a hit as you’re going to find on the sitcom front, three years in and banana yellow and grapeade purple remain a perfect match. OMGosh!