When it comes to Pink Floyd and politics, one refrain tends to ring louder than the others: “We don’t need no education!” This lyric from the schoolroom chant of “Another Brick in the Wall (Part Two)” is a distillation of the anti-fascist politics of 1979’s The Wall. In addition to being one of Pink Floyd’s finest achievements, The Wall is one of rock music’s great double albums, both for its classic tunes (“Comfortably Numb”, “Hey You”) and political commentary. The cinematic scope of The Wall is part of its appeal, but one side-effect of its stature in the Pink Floyd canon is that it casts a shadow over its predecessor, 1977’s Animals.

Beloved by Floyd diehards but infrequently heard on classic rock radio, Animals is among the proggiest of Pink Floyd’s studio LPs. Brevity defines the track listing and overall runtime: The record runs a concise 40 minutes spread across five tracks. On the matter of the individual songs, however, the band indulges in numerous lengthy jams, resulting in tunes that run 17 minutes (“Dogs”), 11 minutes (“Pigs [Three Different Ones]”), and 10 minutes (“Sheep”). Parts one and two of “Pigs on the Wing” bookend the album, providing short, somewhat hopeful acoustic guitar-led tracks in an album that desperately needs some hope. No guitar or keyboard solos are wasted, and “suite-like” is the name of the game compositionally.

Forty years after Animals’ release, prog is a decidedly non-mainstream, even “non-cool” genre, and the songs the average layperson is likely to remember are not the sprawling epics of Animals. Yet, this has not prevented the record from leaving a distinct imprint on the musical landscape since 1977. Multiple outlets rank Animals in the top five of Pink Floyd’s best records; we here at Consequence of Sound put it at number three. Numerous contemporary progressive artists have tipped their hats to the album, especially the epic “Dogs”. (As if to further entrench the prog credentials of “Dogs”, scholar Gilad Cohen published a journal article exclusively about the track’s composition.) Opeth borrows a central keyboard riff from the song on its 2014 album, Pale Communion, and Porcupine Tree’s 12-minute “Time Flies” is a memorable extended tribute to the song.

Ranking: Every Pink Floyd Album from Worst to Best

Much has been written about how Animals represents a significant musical turning point for Pink Floyd. Though guitarist David Gilmour has spoken fondly about his songwriting contributions to the album, namely the bulk of “Dogs”, Animals is typically seen as the album where vocalist Roger Waters took over Pink Floyd, culminating in his gargantuan vision for The Wall two years later. There is much to be said on this subject, but in reflecting on Animals’ 40th anniversary, the inter-band tensions over songwriting control are not what stand out. Listening to Waters sing the “Pigs (Three Different Ones)” lyric “You’re nearly a laugh/ You’re nearly a laugh/ But you’re really a cry” in 2017, it is his political vision for Animals that makes the record stand out in the Pink Floyd oeuvre. Revisiting this album couldn’t come at a better time, as some have noticed already: At the end of 2016, a group of Chicago architects proposed a plan involving the blocking of the Trump Tower Chicago logo with gold balloon pigs, a direct reference to the pig floating between two of the chimneys of London’s Battersea Power Station on the cover of Animals.

Animals opens with a slight trace of doom. Like the second part that ends the album, “Pigs on the Wing (Part One)” is a brief acoustic framing device. Its major key signature is a clear contrast to the frequently sinister riffs that form the landscape of “Dogs”, “Pigs”, and “Sheep”. Waters chronicles the apathy that surrounds him: “If you didn’t care what happened to me/ And I didn’t care for you/ We would zig-zag our way through the boredom and the pain/ Occasionally glancing through the rain/ Wondering which of the buggars to blame/ And watching for pigs on the wing.”

Those who watched the multiple surprises of 2016’s major elections – Brexit, Trump’s victory – should find this apathy familiar. It is not unlike the apathy behind the “of courses” in Britain and the United States’ 2016 elections: “Of course England will stay in the European Union”; “Of course Hillary Clinton is going to crush Trump.” As the antics and exaggerated promises of politicians like Nigel Farage and Trump piled atop each other, forming a critical mass of sensationalism, apathy was a natural result. (Un)intentionally comic and buffoonish figures like Farage and Trump, for all of their political clout, seem like men who could never succeed because of their lunacy. For many, high ratings do not necessarily result in a high vote count. But the results of the Brexit referendum and the US presidential election are direct answers to the question posed on “Sheep”: “What do you get for pretending the danger’s not real?” 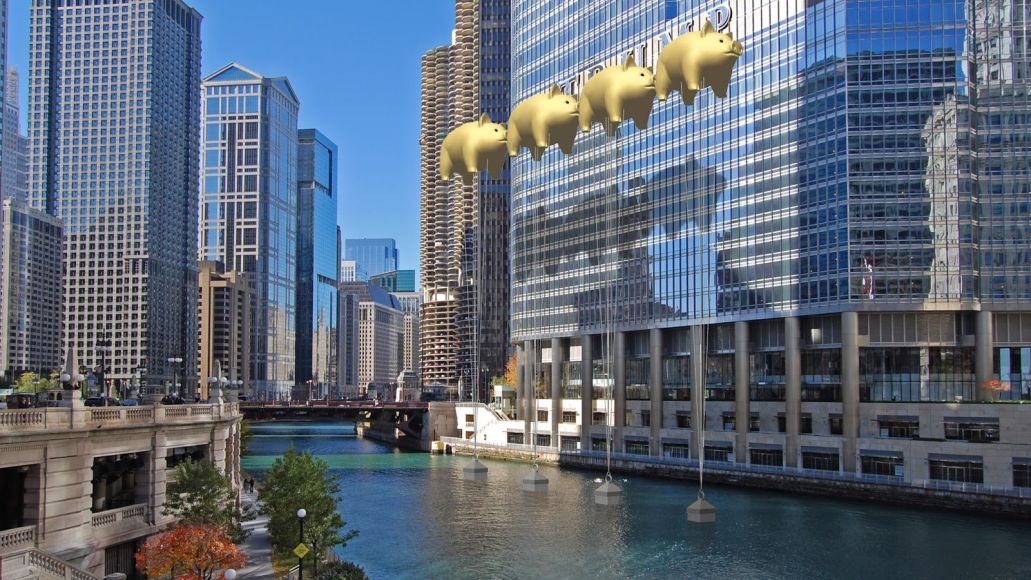 Waters’ mentioning of the human tendency to pass the buck (“Wondering which of the buggars to blame”) goes hand in hand with the three categories of animal that make up the album’s narrative, which derives from George Orwell’s oft-imitated allegory Animal Farm. The dogs are ruthless capitalist competitors; the pigs are tyrannical overlords; the sheep, unquestioning and docile, are perpetually subject to the power of the former two. “Animals offers zero moral complexity,” writes our own Kristofer Lenz of these three political classifications. Indeed, as is the case with Orwell’s allegory, these categories are oversimplified, if enlightening, to some extent. Labeling a group of people as “sheep” or “dogs” is the precise kind of divisive thinking that enables the iron-fisted “pigs” of 2017, like Farage and Trump. In-group/out-group defines the mentality of the nativist resurgence sweeping the Western world: “real America” versus the foreigners “taking away jobs,” “real Britain” versus the immigrants “causing trouble” by coming into England.

The tension between simplistic thinking and complex reality is captured in the construction of Animals. The single-minded thinking behind the allegorical pigs, dogs, and sheep is juxtaposed with some of Pink Floyd’s most complex songwriting, exemplified by Gilmour’s otherworldly guitar playing on “Dogs” and the Rick Wakeman-esque keyboards on “Sheep”. Although the three core tracks of Animals are lengthy, Waters’ lyrics are not florid or overlong; there are far more instrumental than vocal passages. The dominance of music over words is a critical part of the album’s political commentary: No matter how much Waters tries to get his pig/dog/sheep allegory to play out (especially in the darkly comic warping of Psalm 23 on “Sheep”), the music always pushes back, reminding those who think in terms of “pigs” and “dogs” that the world is more complicated than that.

Given its 1977 release and its political bent, Animals is commonly cited as Pink Floyd’s response to the punk rock movement of the time. Compositionally, the band stuck to its guns: spacey, at times psychedelic prog can still be found in the valleys and peaks of “Pigs (Three Different Ones)” and “Sheep”. Like many great records, Animals is both a product of its time and a timeless commentary on some of humankind’s worst political instincts. The faint gleam of hope at the end of the album in part two of “Pigs on the Wing” is a reminder that humans find ways to stick together even amidst the turmoil of a cravenly capitalist world: “You know that I care what happens to you/ And I know that you care for me too…/ Any fool knows a dog needs a home/ A shelter from pigs on the wing.” Yet, taken together, both parts of “Pigs on the Wing” constitute just over three minutes, less than 10 percent of Animals’ runtime. There’s far more darkness than light here, a reminder that momentary optimism is no substitute for a bold challenge to a world where people are put into boxes as a means of exerting power.

In the 2016 US election and its aftermath, it became all too common to see takes on art as a means of “explaining” political events. Clinton was Khaleesi; Trump, a Sacha Baron Cohen character. While seeing art reflected in the real world is no crime, the rush to treat art as the key to understanding – and perhaps even changing – politics can result in short-sighted thinking. As Jon Hendren quipped on Twitter, “If only ppl in poor, opiate-ravaged rust belt states just listened to the hamilton soundtrack like 2 more times.”

Animals confronts the politics of its time head-on, but it never once condescends to think that it has all the answers, let alone solutions. It is up to the viewer to reject the labeling of humans as “animals,” creatures engaged in nothing but primal conflict. The album ends ambiguously: The listener can’t know if the oppositional mindset of “dogs vs. pigs” and “pigs vs. sheep” has been fully vanquished or only briefly abated. More than anything else, Animals wakes us up from our delusions that seemingly far-fetched political events are hardly “pigs on a wing,” an unlikely occurrence. Given the right political climate, be it 1977 or 2017, politics can be hijacked by those who think of the world in terms of pigs, dogs, and sheep.

“When you lose control,” Gilmour sings on “Dogs”, “You’ll reap the harvest you have sown.” For that message to ring as true as it does 40 years later speaks to the prescient political insight of Animals. But on the matter of politics in 2017, that line carries with it a grave prophecy.

Pick up a copy of Animals here… 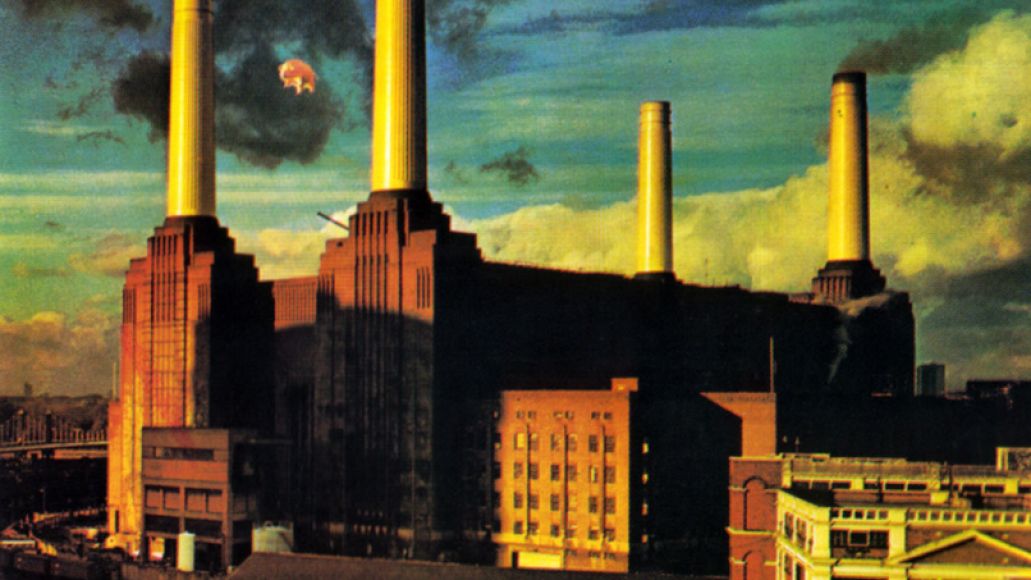