What’s interesting to take note of right off the bat here is that “Part Seven” is, so far, the most Twin Peaks-y new Twin Peaks we’ve seen so far, and it’s also the first to not feature a band at The Roadhouse during the end credits. Up to this point, it seems as though David Lynch and Mark Frost have been alternating between intentionally surreal episodes and more narrative-driven ones — of course, as loose of a meaning “narrative driven” has in the works of Lynch. This one, titled “There’s a Body Alright,” was a straight shooter. We even got to see Special Agent Dale Cooper (Kyle MacLachlan) hand-chop a bad guy in the neck … but more on that later.

The first thing we see in “Part Seven” is a pale-faced Jerry Horne (David Patrick Kelly) in full hippie regalia, complete with fingerless gloves, talking to his brother Ben (Richard Beymer) from a cell phone in the woods. After a long pause is spent just mooning off into the distance, he tells Ben that someone stole his car, that he thinks he’s high, and that he doesn’t know where he is. At face value, this could very well be a case of one too many pot cookies, but what’s more likely here is that we’ve been given the setup for an alien abduction plot line that will pop back up in upcoming episodes. We’ve said it before and we’ll say it again now, if you haven’t read Mark Frost’s The Secret History of Twin Peaks, you need to or else you may find that you’re lost in the woods yourself once things start getting super X-Files here pretty soon. 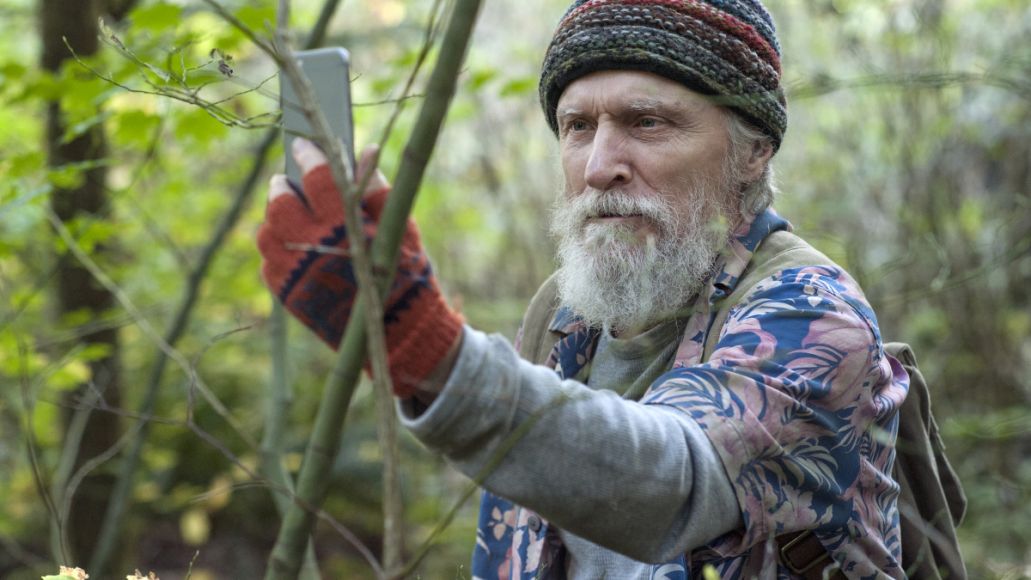 Meanwhile, over at the Twin Peaks Sheriff’s Office, Deputy Chief Hawk (Michael Horse) and Sheriff Frank Truman (Robert Forster) are examining the recovered pages from Laura Palmer’s diary that Hawk found hidden in a restroom door at the station in “Part Six.” As we suspected, one of the pages references the message that Laura (Sheryl Lee) received from Annie Blackburn (Heather Graham) in Twin Peaks: Fire Walk With Me, where she tells Laura that the Good Dale is stuck in the Black Lodge. Knowing what we know of Laura Palmer, she wan’t really a fan of following instructions, but in this case, she did, and thankfully so, because now Hawk is one step closer to figuring out what’s going on with Cooper. Hawk tells the Sheriff that he thinks Leland probably hid those diary pages during one of the times he was brought in for questioning in the original series, which seems about right. Since most of Laura’s diary, especially the end of it, concerned her figuring out that it was actually her dad who had been raping her since she was a young girl, it would make sense that he would want those pages far from view. Hiding them in an actual police station though? Probably not the smartest idea.

From his office, Sheriff Truman Skypes with Dr. Hayward (the late Warren Frost) via a fancy pop-up monitor to ask him about the last time he examined Cooper, which was shortly after he returned from the Black Lodge. Hayward mentions that after examining Cooper, he caught him sneaking out of the intensive care unit fully dressed, and looking semi-suspicious. He assumes that he was probably visiting Audrey Horne (Sherilyn Fenn), who was in a coma following an explosion at the bank (detailed in Frost’s book). Of course, we know more than they do in this instance. Seeing how that was actually Evil Cooper Hayward saw, and that Killer Bob is primarily interested in two things (i.e. raping and killing), it’s certainly possible that Richard Horne (Eamon Farren) is the son of Audrey and Evil Cooper. 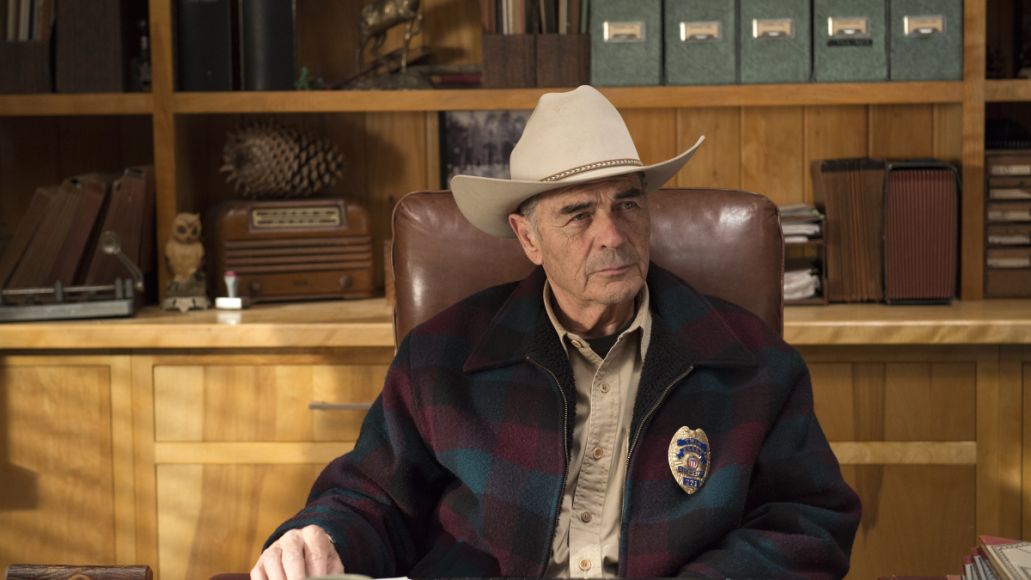 Over at the Buckhorn, South Dakota Police Department, another theory of ours (made in the recap of “Part Five”) proves true when Lieutenant Knox (Adele Rene) pays a visit to Detective Dave Mackley (Brent Briscoe) to inquire about the fingerprints he submitted to their database. When she learns that the fingerprints weren’t just lifted from a crime scene, but from an actual body, she calls Colonel Davis (Ernie Hudson) to let him know that the body in question is that of Garland Briggs (Don S. Davis) but that his corpse is somehow about 30 years younger than it should be. As this is happening, and we receive our hundredth reminder that time is “different” in this world, the same burnt-out jailhouse creeper from “Part Two” quietly saunters down the hall in what’s easily one of the series’ most unnerving scenes so far.

After first meeting Cooper’s former secretary Diane Evans (Laura Dern) in “Part Six”, it wouldn’t have been unusual to not see her again for a few more episodes, if ever again. Instead, she returns right away for one of the most emotionally moving scenes in this season so far. Albert Rosenfield (Miguel Ferrer) convinces Gordon Cole (Lynch) to convince Diane to see Cooper after Albert’s initial request ended with a “No fucking way.” Naturally, Cole agrees, and they make a surprise visit to her mid-century apartment in New York and find her dressed in a red kimono and seeing a male suitor to the door. She tells them to “go fuck yourself” before finally giving in, and together (alongside Chrysta Bell’s Tamara Preston), they make their way to South Dakota,in a private government plane. 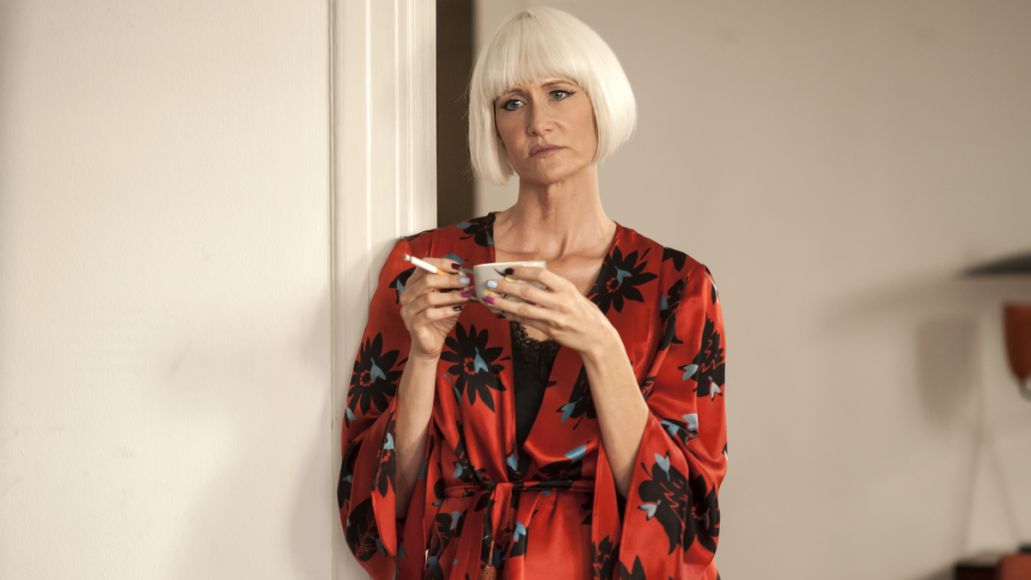 On the plane, Tamara shows Gordon and Albert the set of Cooper’s prints she was previously investigating and they agree that the prints taken from him 25 years ago are different from the ones taken in lockup, which appear to be backwards. To highlight a point, before it fully makes sense, Gordon instructs Tamara to hold out the tops of her hands, palms down, and does a sort of “this little pig” with them saying “I’m. Very. Very. Happy. To. See. You. Again. Old. Friend.” He touches each finger as he says the words and pays special attention to her ring finger proclaiming that it’s the “spiritual mound.” He closes with: “You think about that, Tammy.” Needless to say, we’ll all be thinking about that for awhile, though, the ring finger certainly has its share of implications.

“I knew it was going to be you. It’s good to see you again, Diane,” Evil Cooper tells her once they’re face to face behind a protection of glass. Diane asks Cooper when they last saw each other, to which he correctly answers that it was at her house, seething: “I’ll always remember that night.” His general rape vibes and soulless eyes let her know that he’s not the Dale Cooper she once knew, and she later explains this all to Gordon, crying and falling into his arms for a semi-awkward embrace that’s also the most vivid depiction of real pain this writer’s seen on TV in awhile. It’s pretty clear what went down between Diane and the man she thought was her trusted friend all those years ago, and without even fully being said, the knowledge of that is heartbreaking. 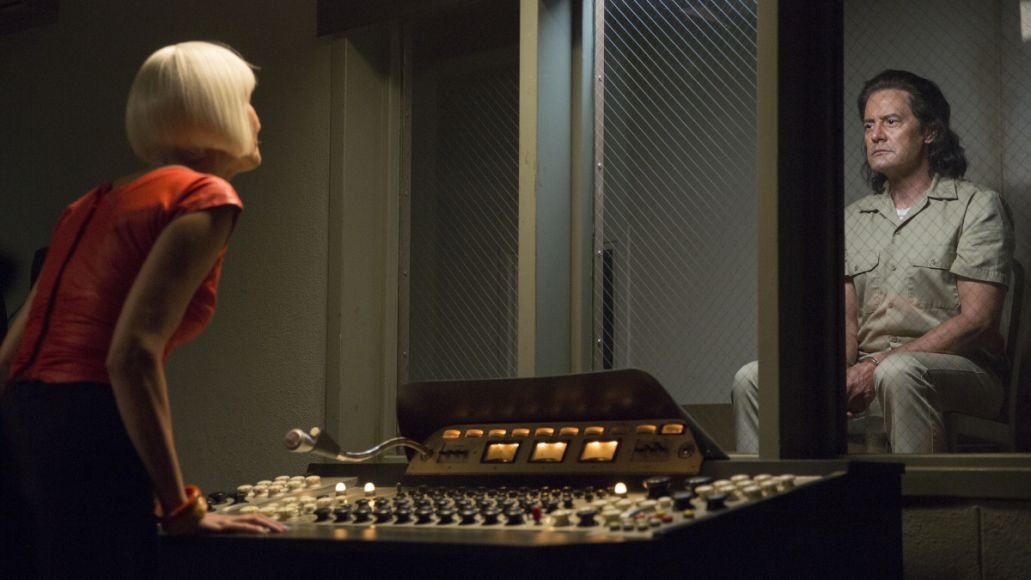 For seven episodes (err, parts), we’ve been waiting for Dale Cooper to truly arrive, and, finally, we received a big slice. Janey (Naomi Watts) goes to pick up Cooper/Dougie from work at the Lucky 7 Insurance building, where she winds up in a heated exchange with a few cops (the likes of which include David Koechner), who came to tell Cooper/Dougie that they found the wreckage of his car. Once that’s all through, Janey and Cooper/Dougie head home, only to be accosted by a gun-wielding Ike “The Spike” (Christophe Zajac-Denek), who’s still hot and fresh from killing Lorraine (Tammie Baird) and her co-workers with an ice pick in “Part Six”.

However, the minute Cooper/Dougie sees Ike running towards them, his inner Dale Cooper swims to the surface, and he pushes Janey out of the way, chops Ike in the neck, and takes hold of his gun. As this happens, the new bubblegum/butt face version of The Arm sprouts out of the sidewalk like a weed and cheers Cooper on saying, “Squeeze his hand off! Squeeze his hand off!” (This writer will personally send the first person to figure out how to make this an alarm clock tone a hot pizza of their choosing. Not kidding.) Following this heroic event, the police arrive at the scene and interview a few eyewitnesses, including Stephanie Allynne, the amazing wife of the amazing Tig Notaro, who’s credited as “Soccer Mom” and tells the police: “Douglas Jones, he moved like a cobra.” 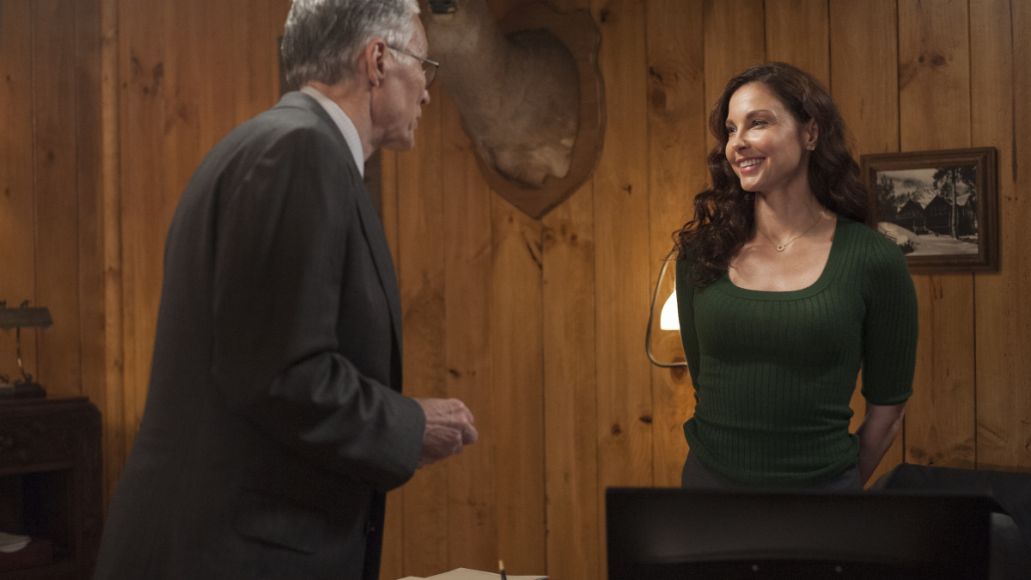 Back at The Great Northern, Ben Horne and his secretary Beverly (Ashley Judd) are exchanging restrained, intimate glances while trying to figure out the source of a strange sound that seems to be moving around the room. This eventually leads to the quick revelation that the key to 315, which Jade sent back in “Part Five”, came in the mail, which elicits a twinge of nostalgia from Horne. When he mentions Cooper and Laura Palmer, Beverly appears lost, which suggests that not everyone remembers the infamous death that shook the town 25 years ago.

In lieu of a band at The Roadhouse to wrap things up, we’re instead given the revelation that the establishment is still being used as a call girl ring by the Renault brothers. Jean (Walter Olkewicz, who also played Jacques in the original series) conducts his gross business over the phone, alluding to a couple of straight-A students who may be causing them trouble, while a man sweeps the floor for a really long time to the sounds of Booker T. & the M.G.s’ “Green Onions”. You’d think we’d linger here a little longer and the familiar “Starring Kyle MacLachlan” credit would appear, but similar to last week, Lynch pulls another fast one, and the story continues. 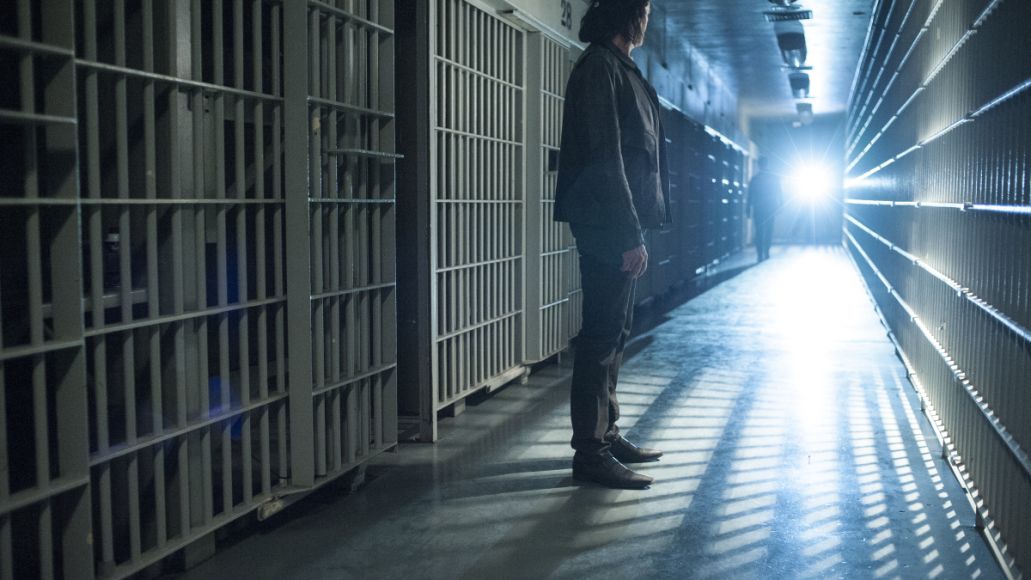 As expected, Evil Cooper makes his break from lockup in a beige rental car that he blackmailed the warden for earlier on, and he’s joined by his pal Ray Monroe (George Griffith). The two drive off without a hitch and into the night as we immediately hop back over to Twin Peaks. As usual, things are fairly lively in the RR Diner, where locals eat to Santo & Johnny’s “Sleep Walk” on the jukebox. Rather ominously, a young kid pops in and asks if anyone’s seen Bing — who’s credited as Riley Lynch, son of David and performer in the band Trouble that played The Roadhouse in “Part Five.” The kid runs off, the diner occupants look only mildly concerned, and we’re left wondering who the hell Bing is and why the kid looks so concerned. Was this the guy that Andy was waiting to meet out on the road? Rest assured, things aren’t what they seem in Twin Peaks, and the choice of song couldn’t be more fitting: Enjoy this dreamy moment while it lasts…

“This may require a slight change of attitude on your part.” –Gordon Cole

“Douglas Jones, he moved like a cobra.” – Soccer Mom

Next Week On Twin Peaks

— We learn why Ike’s hand flesh stuck to the gun he tried to shoot Cooper with? (Yuck)

Tonight at the Roadhouse

— The clean up crew have some “Green Onions”…