If the experience of watching, and then attempting to process, “Part Eight” has left you with the early symptoms of IBS, you’re not alone. This installment, which could very well have been called “Pioneers of Bad Vibes: An Origin Story”, crushed heads (both literally and figuratively) just like the network and cast hinted it would prior to its airing.

Best explained: If you were to have a nightmare about the genesis of the inhabitants of the Black Lodge, Twin Peaks, and how the two intersect, this is what that would look like. The episode starts fairly simple with Evil Cooper (Kyle MacLachlan) and his reluctant cohort Ray Monroe (George Griffith) driving down a dark road lit only as far as the car’s headlights will reach. Ray asks if they can stop long enough for him to relieve his bladder and before the first drop hits his shoe, Evil Cooper is behind him with a gun he pulled from the glove box. Ray, of course, has a gun of his own, and when Evil Cooper discovers his is a dud, his partner-in-crime fires a few shots and drops Evil Cooper into the dirt. From here, we depart any sense of normality and get sucked into a mix between evil Oz and an 8th grade science class’ showing of a Big Bang Theory VHS for the duration. Buckle up. 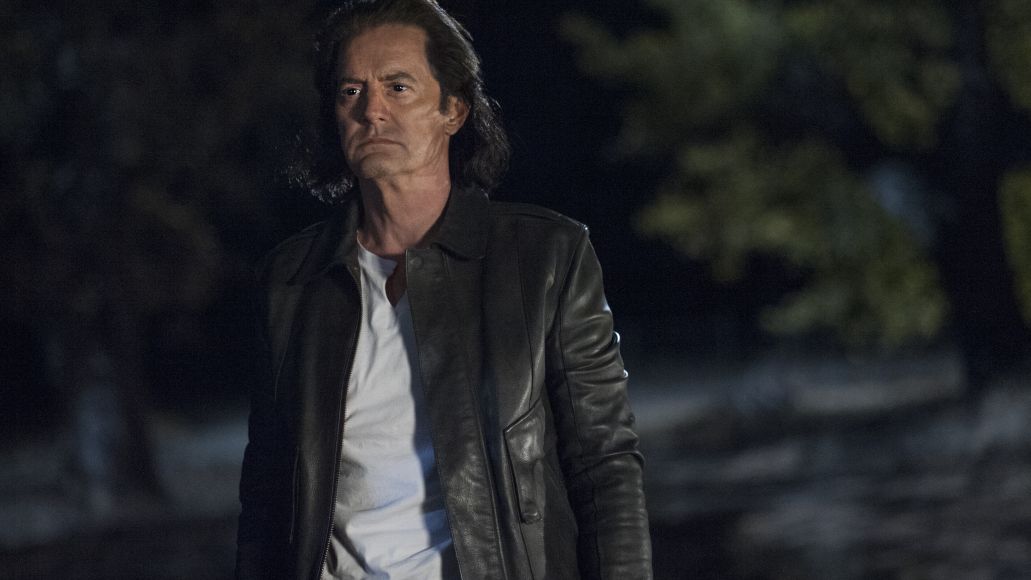 As Evil Cooper lays in the dirt, a flood of shadow figures run toward him from the darkness just beyond. The figures all look similar to the crispy ghoul that appeared in a jail cell in “Part Two”, and again in “Part Seven”, lurking the halls of the Buckhorn, South Dakota police department where the headless body of Major Garland Briggs (Don S. Davis) is being held. They dance around Evil Cooper’s bleeding body, crouching down periodically to press on his chest and then rub blood on his face. At the end of their work on the bleeding body of Evil Cooper, they pull a sack containing the leering face of BOB (Frank Silva) from his belly as though they’re performing a cesarean. By the time the viewer’s eyes land on him, the image is sealed into that nasty little box in the back of the mind that only gets cracked open in the late hours of night when you’re stumbling from bed to the bathroom in your underpants. This face. Will haunt you.

Naturally, Ray makes a run for it and calls someone named Phillip, who we can only assume is the long lost Phillip Jeffries (David Bowie). Ray, as we learned earlier during his drive with Evil Cooper, has something that his partner wants, and Phillip is in the know. It will be interesting to see how this plays out later. From here, we cut over to the Roadhouse for a lengthly musical interlude from “The Nine Inch Nails” who perform “She’s Gone Away” off their recent Not the Actual Events EP. The townies on the dance floor flip and bip around, oblivious to the fact that cinder-faced logger aliens founded their town. We know more that they do, which includes the fact that Twin Peaks might not actually be a real place at all. Eh, we’ll get to this soon. 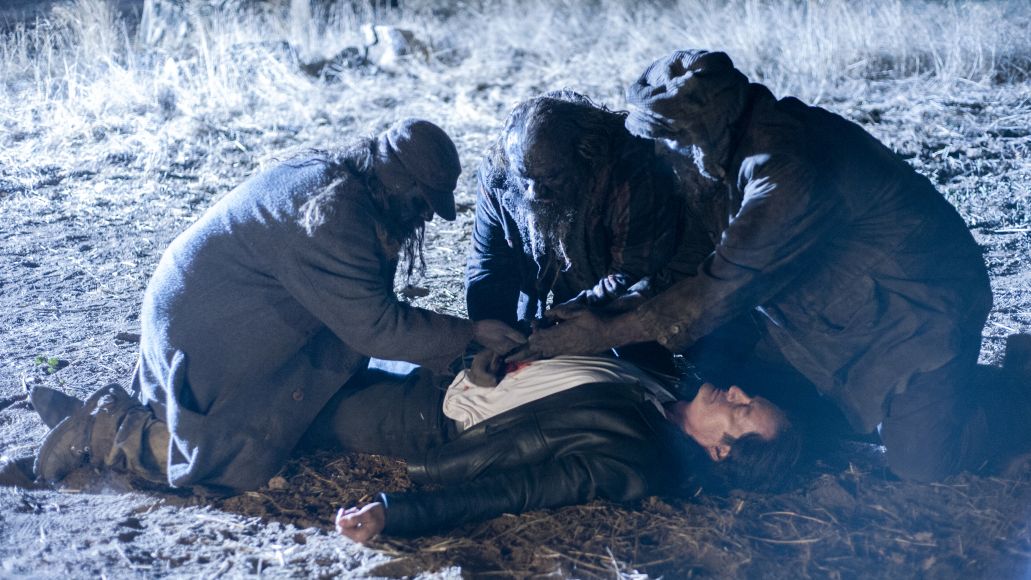 From the Roadhouse, we go way, way back in time, specifically to July 16, 1945 at 5:29 MWT in White Sands, New Mexico. A quick search will reveal that on this precise date in history the first atomic bomb was successfully tested. (It should be noted that Gordon Cole (David Lynch) has a poster of this explosion in his office, which we got a glimpse of in “Part Seven”.) We’re shown the mushroom cloud, and then get sucked into it, changing from pitch blackness, to vivid orange, to a blanket of stars, and back again. After this Kubrickian imagery, we end up in front of a black and white convenience store, which we now know is the very convenience store the original inhabitants of the Black Lodge (MIKE, The Arm, The Tremonds/Chalfonts, Bob, etc) lived above. Inside the convenience store, a figure that looks like a candle carving and/or voodoo doll spits out a rock candy tube (just … walk with me here) and inside of that is the face of BOB and some large Hatchimal-sized eggs.

We then float visually from here to dark waters, similar to those Cooper found himself looking over in “Part Three”, with a black stone tower sprouting up from their depths. At the top of the tower is a silver Guggenheim-esque building with a slit of a window in the side that we eventually zoom within. Inside is another black, butt plug-looking antennae module, which we also saw in “Part Three”, and a woman on a couch (Joy Nash), who’s swaying back and forth to music coming from the same victrola shown at the end credits of “Part One”. The butt-plug antennae sounds an alarm and The Giant (Carel Struycken), who’s again credited as a string of question marks — comes out to inspect. He shuts it off, and then leads us up a fancy flight of stairs to a big room with a projection screen at the front of it. 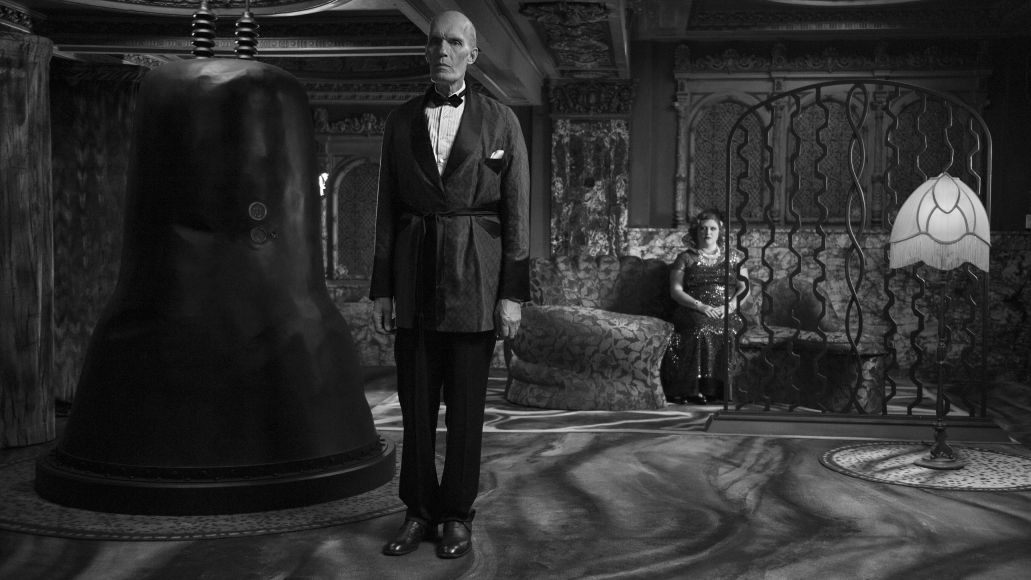 As he watches the mushroom cloud we saw earlier on a large silver screen, “Laura Palmer’s Theme” plays backwards. The same image of Bob we saw earlier is shown again, and at this point, The Giant pauses the projection, walks to the corner of the room, and floats into the air. The lady from before (is this the “mother” referenced in “Part Three?) walks into the room and looks up at The Giant, who now has a thick stream of sparkly gold light coming from the top of his head from which a gold marble emerges. The gold marble floats down to “mother”, and when she gazes into it, we see Laura Palmer’s (Sheryl Lee) high school photo. The woman release the Laura marble into the air and it perfectly fits into the wide end of a gold wind instrument, which then drips it into a large image of Earth that’s now projected on the screen. And that, ladies and gentlemen, is how babies are made.

After all that, we flash ahead in time to August 5, 1956 in the New Mexico Desert. Not much seems to have happened on this date in history, unless you count the birth of Maureen McCormick — aka, Marsha Brady — a monumental event. In the sand, we see an egg cracking and from the shell crawls a creature that looks like half-flying cockroach and half-frog. Interestingly, this creature also looks a lot like the flying frog referenced in the history chapter of Mark Frost and David Lynch’s 1991 book titled Welcome to Twin Peaks: Access Guide to the Town. In the book, there’s a passage about this frog being used as a special crest by the Chinook Indian Tribe in honor of a “frog clan” ancestress who resides in a house that floats on a lake. The woman is described as having frogs on her knees, breasts, eyebrows (too much), and the backs of her hands. One of two things could be possible: 01.) Lynch and Frost totally forgot about this creature already being added to Twin Peaks lore via this book that came out 26 years ago and are just recycling “frogs” as a thing or 02.) Senorita Dido (aka, the lady sitting on the couch we mentioned before) has more to do with these frogs hatching from the eggs than we think. The frogs seem to be evil, in that they came from the same goo that birthed Bob, but hey, haven’t we learned by now that anything is possible on this show? 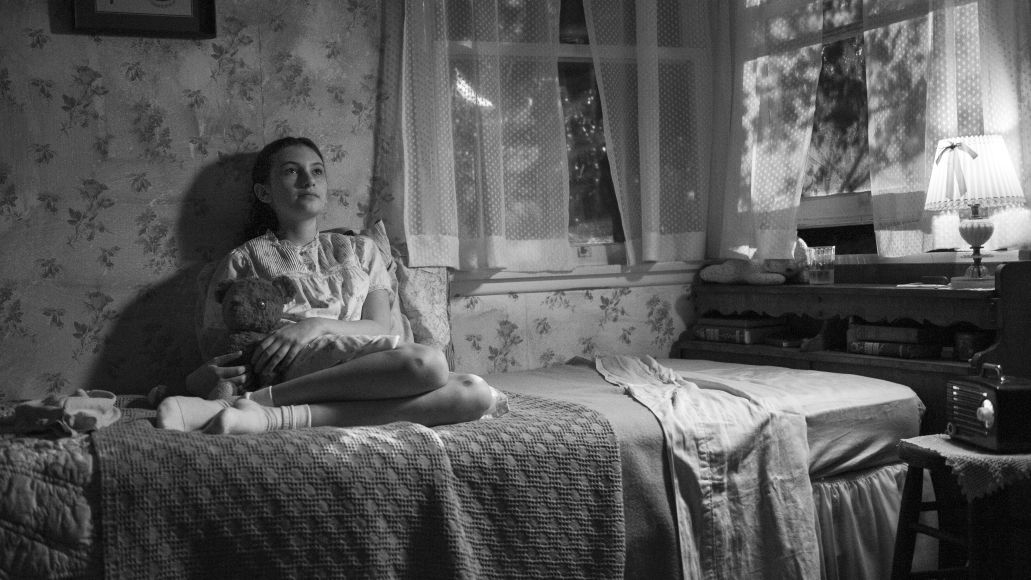 Okay, so back to the frog, it slowly crawls out of frame and then we come upon two ’50s teens (Tikaeni Faircrest and Xolo Mariduena) walking in front of the convenience store. The girl finds a penny in the dirt (what’s this, like the fourth instance of a coin so far?) and it’s heads up, which she says is good luck. The boy walks her to her door and asks for a kiss, which she gives him. As he departs, we see another one of those crispy figures (Robert Broski, credited here as Woodsman) fall from the sky. By the way, if you’ve wondered why these things are dressed like lumber jacks every time we see them, duh, the Pacific Northwest. The crispy alien staggers into the road and stop a car being driven by a husband and wife. The man rolls down the window, which you should never ever do if a crispy lumberjack alien comes towards your car, and then the alien leans in and, in the most terrifying metallic croak ever, asks: “Gotta light?” He says it over and over until the man finally gets himself together enough to drive away, dodging several more crispy aliens that dart out in the path of his car.

Eventually, we end up at the KPJK radio station, where the same crispy alien wanders in and squishes everyone’s heads into a bloody pulp, but not before asking for, you know, a light. We’re given some more of this town’s layout, which includes a diner called Pop’s, a name not lost on fans of Mädchen Amick (Shelly) and her role in Riverdale, which has a diner of the same name. Back at the radio station, the alien has now commandeered the microphone to deliver the following chilling message: “This is the water, and this is the well. Drink full and descend. The horse is the white of the eyes, and the dark within.” The last image seen in “Part Eight” is that of the roach/frog that hatched from the egg earlier crawling into the little girl’s bedroom window, and then going into her mouth. And this, ladies and gentlemen, is how Bobs are made.

— Evil Cooper comes back around