Before the premiere screening of Kuso, a Sundance representative advised the audience that “the film you’re seeing tonight will melt your fucking brains. There will be no survivors.” It’s as reasonable a way as any into Steven Ellison’s debut feature; the man best known as Flying Lotus has created something that demands attention, whatever you might make of it. Kuso is a hallucinatory, scatological, grotesque, and occasionally hysterical work of utter mania, the kind of wild cinema that cuts through the noise of all safer, more marketable filmmaking. It will more than likely repel as many viewers as it attracts, if not far more of them, but those willing to let Ellison walk them through his 93-minute nightmare will find something challenging, revolting, and endlessly watchable. It’s a horrorshow from which it’s impossible to look away.

Though standard narrative analysis hardly applies here, Kuso loosely frames its four interwoven vignettes through the prism of a post-apocalyptic California, after an earthquake has eradicated the majority of humanity and those who remain are scarred and covered in hideous boils, shells of humanity wandering through a TV-addled wasteland. The parade of repulsion kicks off with a frenetic bit of slam poetry about the end of the world, and then moves on to one hideous sequence after the next. A pygmy eats maggot-infested soup, and finds a vaginal orifice in the woods on which he smears his feces, ostensibly in order to help it evolve. A woman gnaws on concrete in hopes of devouring her baby for survival, before being dragged into a void populated by a wormlike beast. A would-be rapper gets high on her couch with a pair of fur-covered aliens, one of which is voiced by Hannibal Burress, before discovering that she’s pregnant with Tim Heidecker’s child; he climbs out of the toilet as she’s taking a pregnancy test to solicit a second hookup. A man, plagued by his phobia of breasts, seeks unconventional treatment from George Clinton as a doctor with a roach-like, medicinal bug in his anus.

If you’re still reading at this point, know that Kuso is at once everything you think it is, and more than it might seem. While it’s first and foremost an aggressive provocation, one rife with farting and shitting and ejaculation, it also achieves the kind of half-lucid anguish that’s best compared against some of David Lynch’s animated work, or the kind of thing that might air at the latest hours of an Adult Swim programming block. (The unsettling animation sequences that bridge the various short films also strike a distinctly AS tone, in no small part because FlyLo has been orchestrating their commercial bumper music for years.) While there are distinct notes of the sophomoric throughout Kuso, given that this is a film in which the discover of a talking boil on a woman’s neck leads to one of modern film’s more horrifying threesomes (seen through to completion, no less), there are also some truly unsettling motifs regarding family, love, sex, and the horrors of a world gone completely mad.

Ellison works in a delirious range of mixed media, from 8-bit to collage to computer animation to practical effects, sometimes all in the same scene. Kuso is not an entirely humorless film for all of its avant touches, but after a while it’s hard to tell whether the laughter can be attributed more to disoriented confusion or effective punchlines. In this regard, it’s appropriate enough that Heidecker shows up, since the unnerving pre/post-digital experimentation of Tim & Eric Awesome Show Great Job! is as relevant a point of comparison as any. Ellison fixates on the most nauseating functions of the human body to such a point where the film starts to feel like an escalating dare, demanding that audiences expand their boundaries of how sick a film can get before they refuse it. The aesthetics of Awesome Show are present throughout, from the sudden freeze/crash zoom combinations to the filthy, childlishly bawdy approach to sex. (At one point, Heidecker is framed mid-coitus with what appears to be a hybrid of a turkey and a human torso, and it’s maybe the fifteenth most unsettling image in the film.)

Yet there’s more to Kuso than shock value, even as shock serves as its first, second, and third most prominent motives. Ellison repeatedly echoes the image of family photos throughout the film; even in his horrific nuclear universe, everybody has a picture in their living room of somebody they lost in the earthquake and lament greatly. The ache of loss hangs over even the more comic setpieces; an early, completely filthy sex scene involving autoerotic asphyxiation mediates on whether both parties enjoyed themselves after several minutes of unspeakable acts. Late in the film, a woman is given a seemingly involuntary abortion to a score of sound effects from Mortal Kombat, and it’s unclear whether it’s a moment of cathartic victory or deep sadness. Though Ellison works in lurid tones, it’s clear throughout that Kuso is firing on the kind of level that a certain kind of moviegoer will want to unpack for some time to come. The title itself is a Japanese colloquialism for “shit,” or at least the kind of freewheeling internet detritus that holds clear influence over Ellison’s work here, and it couldn’t be more appropriate for what he manages here.

Ellison’s score vacillates between hellish ambient sounds and the kind of free-jazz electronica on which he’s made his name to date, along with some guests; his regular collaborator Thundercat pops up throughout, as does Aphex Twin. It lends the film a nauseating affect, appropriate given the subject matter, and manages the rare feat of guiding an audience from nodding their heads to turning them away entirely depending on the scene. It’s hard to disseminate any kind of a thesis from Kuso, but there’s enough on hand to suggest that one exists; if it’s not in the film’s invocations of family dynamics, it might be in the baked exchanges between the couch aliens, who debate whether the shows on their TV are art or garbage. Kuso is both, defiantly so, and it wears its abrasive tendencies with pride and more than a bit of a smirk. It’s a film worthy of engagement; just don’t say that we didn’t warn you. 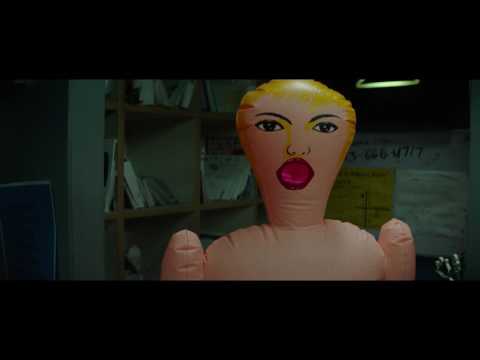