Just outside a pair of 10-foot-tall fences that line the west end of the FYF Fest footprint runs Vermont Avenue. The festival is just a couple blocks off of USC’s campus to the north while the street continues in the other direction to South Central Los Angeles. On Saturday night, while Frank Ocean gave his first US performance in three years at the event — two years after canceling a headlining gig at the same event and going AWOL until the release of a pair of albums last summer — that sidewalk filled up with music fans from both communities. With the show sold out, some fans even climbed trees and poles, stared out of apartment windows, or did whatever needed to be done to say they were there. For a festival that takes pride in declaring itself the best weekend of the summer, the sense was now that this moment could be among the best of these fans’ whole lives.

If it sounds like hyperbole, maybe it is. But when FYF released their lineup several months ago, the gauntlet was laid down that this year could be something truly different. The acts were diverse, spanning age, gender, sexual orientation, and genre. It was the paradigm of care. And that’s not to say other festivals don’t put in the hours to make their own event special. But at FYF, the effort shows. Each year seems hellbent on not just surpassing the previous installment, but blowing it out of the water. You could go on down the line — Frank Ocean’s return to America, Nine Inch Nails’ first festival in several years, Missy Elliott’s first US date in even longer– and find not just a curated lineup of good gets, but a treatise on the DNA of music as both entertainment and art, be it past, present, or future. Sure, you could see Solange’s engrossing, choreographed presentation of her landmark A Seat at the Table or A Tribe Called Quest’s reimagining of themselves without Phife Dawg at other music fests this summer, but when put together as a package, FYF Fest captures a slice of both music in the moment and music as a legacy. 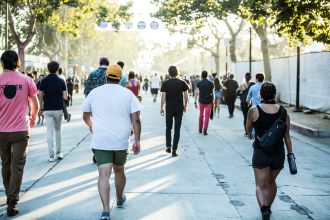 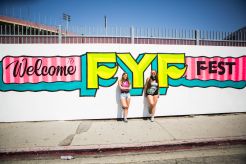 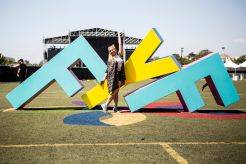 Interestingly, FYF Fest isn’t just a product of expanded resources. Sure, as they do better financially each year, landing their dream lineup is easier to afford. But it is important to note that Solange has played FYF Fest three times now, dating back to 2013. Others, like Run the Jewels, Ty Segall, Mac DeMarco, and Flying Lotus have become annual institutions. It’s not just that the fest books well; it’s that they play the long game, too. This year, with performers like Big Thief, Kelly Lee Owens, Princess Nokia, Arca, and Julia Jacklin still cutting their festival teeth, there’s the sense that FYF knows they are building lasting relationships with a new set of artists, and that the two will continue to grow together.

It was all enough that FYF didn’t even have to rely on special guests like so many other festivals now do. In their first year as a three-day-event, most of the guests kept to the audience. Sure, Brad Pitt wound up becoming part of the show, but others like Chris Rock, Beyoncé, and Katy Perry were happy to just enjoy the spectacle like the rest of us. The only time celebrity culture and FYF’s Hollywood proximity overlapped was when ASAP Rocky had his security team shove away Frank Ocean fans who’d been camped out for a spot just so Rocky could get a better look. Sure, it’s as much as a cool weekend hangout as most other fests are for their community, but it wasn’t just the teens sprinting in when the doors opened on Saturday who brought an unparalleled passion to the sets. Whitney couldn’t step 10 feet onto the festival grounds without being mobbed by fans telling them how good their set was. Princess Nokia was nearly moved to tears by the reception she received. Love for music at FYF Fest is both palpable and intoxicating.

From the locally curated food to the Frank Ocean and NIN pop-up shops, it all works so well that when something falls short, it really sticks out. This might be why the traffic flow issues, including hard-to-navigate VIP and beer garden entry and a remarkably difficult Friday entrance process, stand as the biggest sore on what was otherwise a successful installment. All the issues stem from the location, which is hurt by the construction of a new soccer stadium right next door. In light of this, it’s always pretty amazing that FYF manages to transform their location into an experience that feels removed from the everyday. Tons of effort is made to make it look scenic, even if piles of rubble lurk just beyond the fences. 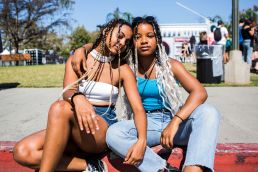 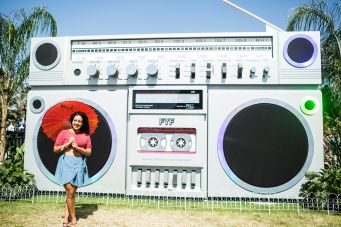 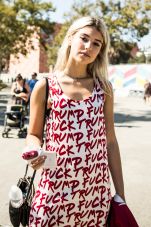 Still, FYF Fest has never felt more comfortable with itself as it does in 2017. There’s a confidence that comes with knowing that when minor hiccups occur, the programming will be so special that they’ll seem like afterthoughts. The lasting memories will be the fans cheering when Bjork says, “thank you” in her inimitable voice, when a single fan shouts, “Let’s fucking go” as Trent Reznor and company burst out of the gate at 100 miles per hour, when Iggy Pop piles his biggest hits at the front of his set to convince even the most skeptical attendee of his bona fides, and when Tribe manages a legitimate fake out by executing a false end to their set and returning with a powerful, cathartic “Can I Kick It?” Or, for those that lined Vermont Avenue for just a glimpse of Frank Ocean, it might just be standing with your friends, hearing the songs you love, and, for a second, having the world around disappear from the periphery.

We’ve assembled some of the highlights of the weekend in the pages that follow, ranked from worst to best for organizational purposes. We couldn’t get to everything. Know that Solange certainly dazzled with a singular vision, that Kelly Lee Owens turned the Outer Space stage into a showcase for her electronic songwriting, that Anderson .Paak might be the most talented young musician on the planet that Whitney are still one of the best lazy sunshine acts around, that Built to Spill proved why Keep It Like a Secret is an all-timer, and that Hundred Waters proved ready to launch a new collection of songs that should earn them hordes of new fans. That said, here’s what we did get to.