We are now exactly halfway through Twin Peaks: The Return and it’s hard to imagine the mashed potato mountain of mysteries that have been piled on viewer’s plates so far coming anywhere close to being fully digested in the remaining nine parts. After the epic mind-fuck of “Part Eight”, which took us through different historical times, locations, and even dimensions to show the origin of what amounts to an age-old battle between good and evil that set into motion the Twin Peaks universe as we thought we knew it, this latest installment is a checkerboard of clues and build-up, like wrinkled, water logged pieces of a thrift store puzzle we’ll be futzing with till this thing ends on September 3rd. If you squint and rub your forehead real hard it can, just now, almost seem like we’re getting a grasp on things.

We meet back up with Evil Cooper (Kyle MacLachlan) who was left bloodied on a dirt road after being shot by his double-timing co-hort Ray Monroe (George Griffith), and then left to the roadside medical work of the Woodsmen (Robert Broski) who removed the essence of Bob from his stomach, which doesn’t seem to have taken him off course in the slightest. He meets back up with Chantal (Jennifer Jason Leigh) and we’re introduced to her husband Hutch (Tim Roth), who assists in getting him into a vehicle and back on the road. Evil Cooper leaves Hutch with the assignment of killing Warden Murphy (James Morrison), who he previously blackmailed into helping him escape federal lockup, and then fires off a text message (“Around the dinner table, the conversation is lively…”) to who we later learn was Diane, before tossing the phone in the dirt and driving away. 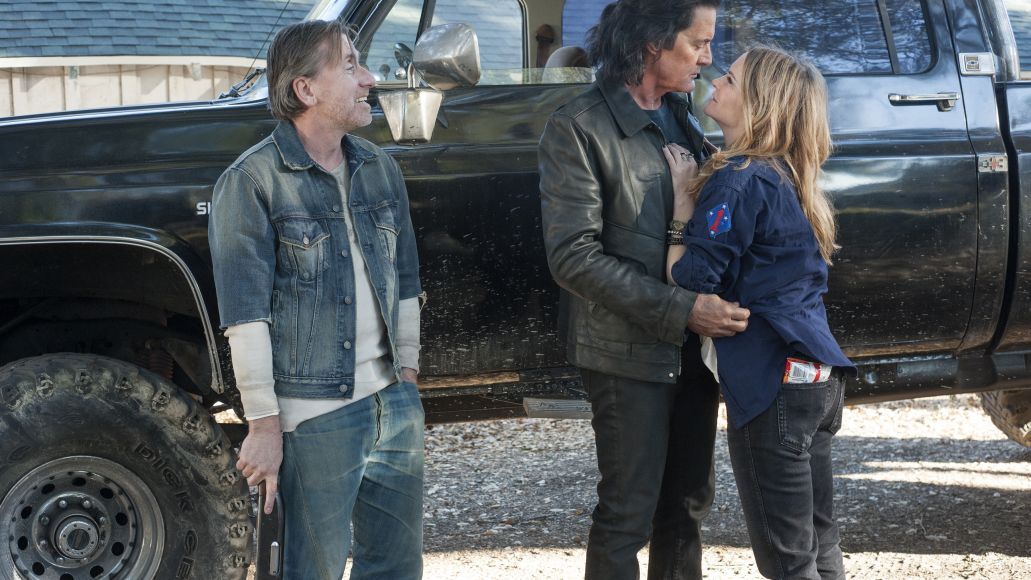 Gordon Cole (David Lynch), Albert Rosenfield (Miguel Ferrer), Agent Tamara Preston (Chrysta Bell), and Diane Evans (Laura Dern) are in a private government plane en-route back to Philadelphia, after taking Diane to have a look at Evil Cooper in lockup before he escaped, when Cole gets a call from Colonel Davis (Ernie Hudson) at the Pentagon. Upon his debriefing by the Colonel, Cole re-routes the plane to head back towards South Dakota, this time to Buckhorn, where his team heads to the police department to meet with Lieutenant Cynthia Knox (Adele René) about the headless body of Garland Briggs (Don S. Davis) that’s being held in the morgue there. As this is all happening, Cole gets another call, this time from the soon-to-be-dead Warden Murphy, letting him know that Evil Cooper has escaped. He, of course, leaves out the part about how he helped him do it.

Over at the Las Vegas police department, Dougie/Cooper (MacLachlan) and Janey-E Jones (Naomi Watts) are being questioned about why his car was blown up and the detectives discover that there is no record of Dougie existing prior to 1997, which makes sense because he was manufactured for the sheer purpose of buying Evil Cooper some time in this dimension before either getting sucked back into the Black Lodge, or (fingers crossed) killed by the actual Cooper. They grab a coffee mug that Dougie/Cooper was drinking from and bag it to run for prints, which will of course come back as Cooper’s. Dougie’s manufactured prints would just look like multiple thumbs up emojis. 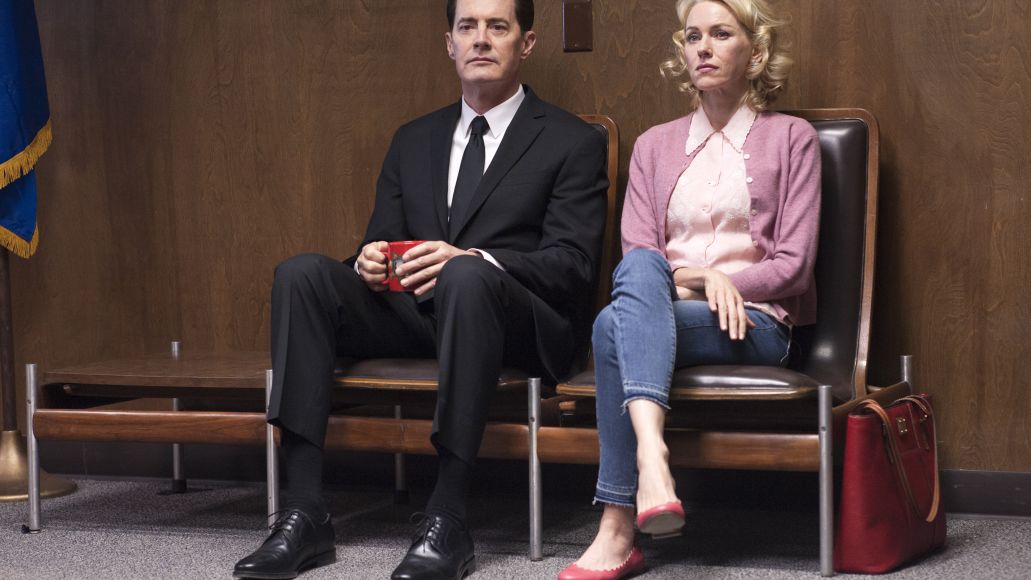 After nine episodes, innocent, bumbling, vulnerable Dougie is growing on us and it will be somewhat sad to see him go, although a silent prayer is said each week that Cooper will snap to and squeeze someone’s hand off again very very soon. Still, watching Dougie/Cooper stare at an American flag in the corner of the police department lobby while “America the Beautiful” plays tugs at all the right heart strings. This moment goes on comically long, as Lynch loves to do, before his attention is pulled away by a long-legged blonde in red high heels, and then again to the gaping holes of an outlet near the bottom of the wall. The possibility of any character, at any time, being sucked from one place to another by electrical current is always there.

A couple of loose ends get tied up in “Part Nine”, namely the arrest of Ike “The Spike” Stadtler (Christophe Zajac-Denek) right as he’s attempting to leave the seedy motel he’s recuperating in after failing in his attempt to kill Dougie/Cooper, resulting in the previously mentioned hand squeezing. Another mystery solved so quickly that it could almost be missed is that we learn Bill Hasting’s (Matthew Lillard) secretary died in a car explosion the day after Evil Cooper shot his wife. It’s been mentioned in several installments that EC is on the hunt for information obtained by this secretary, so her death will seemingly slow him down a bit in finding what he wants. 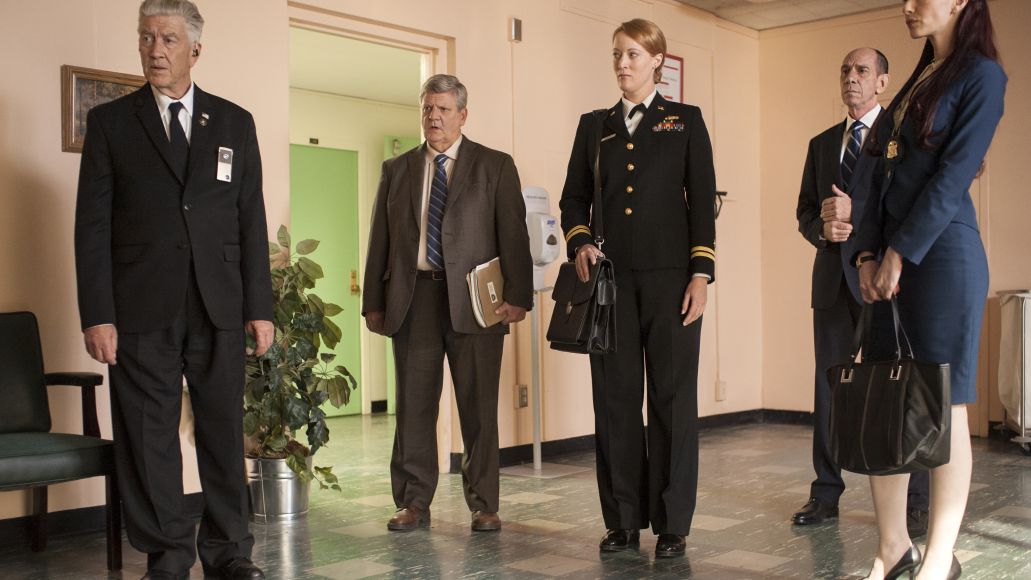 Getting to spend time in Twin Peaks proper is always refreshing and that happens a few times this week, which is both nice, and also a bit unsettling — you know, like when you visit your childhood home in a dream and everything is a bit off. Over at the Sheriff Department, Lucy Brennan (Kimmy Robertson) and Deputy Andy (Harry Goaz) have a cringeworthy conversation about what color chair and ottoman set to buy online, and then we quickly peek in on the Horne family where Johnny (played here by Eric Rondell) is seen running through the house wildly and then slamming face first into the wall, leaving a bloody hole and a screaming mother. Bookended to all of this is one of the most important scenes of “Part Nine”, where Deputy Bobby Briggs (Dana Ashbrook) brings Sheriff Frank Truman (Robert Forster) and Deputy Chief Hawk (Michael Horse) to his mom’s house to ask her about the last time his father spoke with Cooper before he “died.”

Once there, Betty Briggs (Charlotte Stewart) tells them that Garland said they’d all be there asking about this one day, and to give them something once that day came around. She goes over to a brick red sitting chair and removes a metal tube from a hidden compartment at the top of it and then reminds Bobby that his dad predicted he would stop being a scumbag one day and grow into the happy (albeit weepy) adult that he now is. They take the metal tube back to the Sheriff’s Department and Bobby shows them how to open it by smashing it on the pavement out front and then listening for a tone which indicates when it can be fully opened. Inside the tube is a small scroll with directions for what to do before leaving a place called Jack Rabbit’s Palace, a place Bobby and his dad used to hang out at when he was little, and which he named himself. 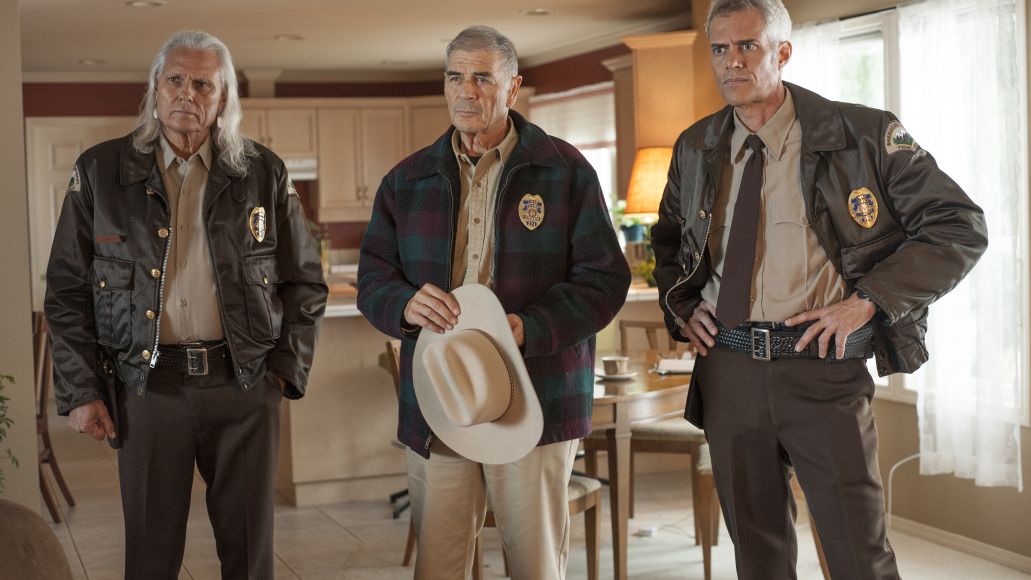 Also on the scroll are familiar owl cave markings in the shape of two triangles side by side, a full red moon, a crescent red moon, two dates (days away from the day in which they’re opening this) and the time 2:53. You may remember this particular time being called out by The Arm in “Part Two” followed by the cryptic warning “time and time again.” Included with this scroll of directions is another sheet containing the transmission gibberish with Cooper’s name repeated twice in the middle of it that Garland showed Dale in the original series. Hawk puts a hard period on the whole “two Coopers” part and now we know, that they know, that there are definitely two different Coopers circulating out there in the world, and that this scroll will connect the dimensions that caused them to exist here at the same time.

Before we get to the second most important scene of “Part Nine”, we’re shown just how much Lynch loves smoking cigarettes. So much so that he wrote an entire scene, starring himself, that involves some choice loitering outside of a police station. After being scolded for smoking inside “a fucking morgue,” Cole and Tammy find Diane outside, leaning against a wall and enjoying another cigarette. Slowly, she and Gordon stare at one another before she finally offers him a drag, to which he obliges, all to the displeasure of Tammy, who uses this time to showcase the many different ways she can overact being both sexy and dramatically annoyed. 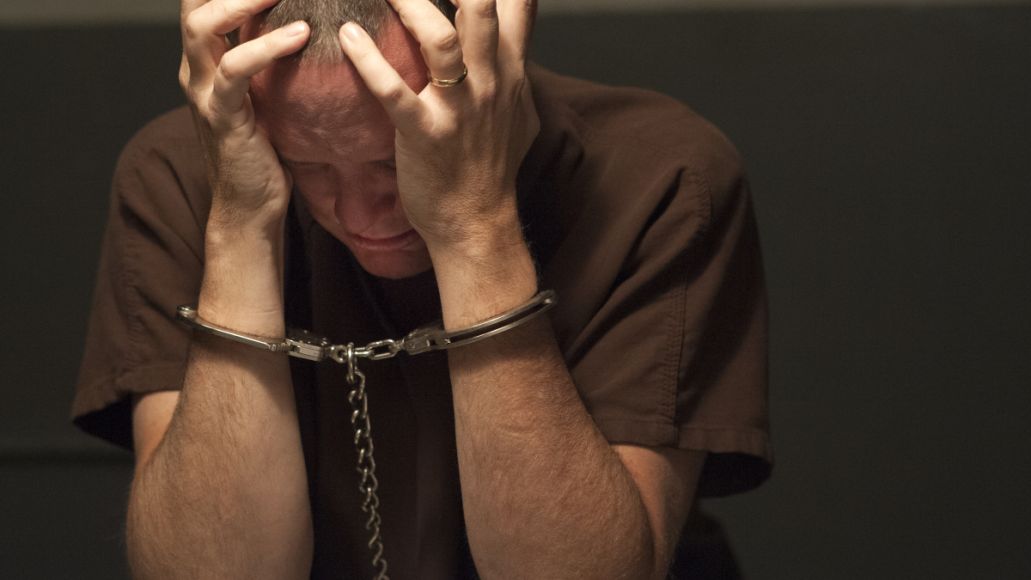 Back inside the station, Tammy interviews Hastings, who we weren’t sure we’d ever see again after “Part Two”, and he opens up about a curious blog he ran with his now-deceased school librarian/love affair Ruth Davenport called The Search For The Zone. (God bless a show that makes real life stuff based on things mentioned on said show. What a delight.) Turns out that this duo’s love of reading and blogging led them to opening up an alternate dimension, one where Garland Briggs was stuck in a hibernation holding pattern. Hastings explains how they provided him with the necessary coordinates to move on to yet another dimension, in which the Major floated into the sky and lost his head, literally, while a crowd of beings (probably Woodsmen?) buzzed around him. Let’s just say, things didn’t exactly work out for the would-be scuba diving lovers, though one might argue love isn’t in the cards for anyone in this new era of Twin Peaks, as we also watch Ben Horne (Richard Beymar) turn down Beverly Paige (Ashley Judd) as that “mesmerizing” buzzing persists in The Great Northern.

It’s taken nine episodes to grab on to one half of a frayed rope. The next nine will tie a knot to the other half. It’s only gonna get weirder from here.

“I don’t appreciate your language one bit, colonel.” – Gordon Cole

— We go to Jack Rabbit’s Palace. Too soon? Probably.

— Where did the essence of Bob go?

Hudson Mohawk mixes things up with a new song titled “Human”, before Au Revoir Simone sends us off with “A Violent Yet Flammable World”…