There’s nobody like Hans Zimmer. For decades, the German-born composer has changed the way Hollywood approaches film scores, melding classical signatures with modern pop elements, all without losing any of the gravitas needed to make a film tick and tock. He’s a heavy metal John Williams, an electronic Bernard Herrmann, an industrial Wendy Carlos; in other words, none of the above. He’s impossible to pigeonhole, if only because his sound has consistently evolved over time. For that reason alone, he’s managed to work with almost every major filmmaker in the industry, from Christopher Nolan to the Scott brothers, Terrence Malick to Barry Levinson, and has scored almost every genre in the medium, ranging from science-fiction spectacles to superhero rollercoasters, lighthearted dramedies to historical epics. Even when the movie’s awful, he’s not, and that notion couldn’t be more apparent than when you watch him perform live.

Wait, watch him live? Yes, sometime over the last couple of years, a lightbulb went off in Zimmer’s head, and he came to the brilliant conclusion that his music might work out on the road. And so, what originally started as a short European stint quickly turned into a full-fledged North American tour, even featuring a prestigious appearance at this year’s past Coachella, where he offered an abbreviated set during one of the festival’s highly coveted slots. Now, seeing how everyone from Goblin to John Carpenter to Ramin Djawadi are touring behind their scores, it was only a matter of time before Zimmer did the same — and it’s not like he’s without reason. His work for world renown blockbusters such as The Dark Knight Trilogy, Inception, Interstellar, Man of Steel, et al. has since made Zimmer as synonymous with pop music as, say, your Kanye Wests and your Beyoncés. People of all ages know Hans Zimmer and that’s a very remarkable power to wield.

On Friday night, that power was on full display at Chicago’s Allstate Arena, a good 20 miles away from all the hubbub going down at Lollapalooza in Grant Park. Good riddance. While the city’s skyline echoed with the all-too-familiar sounds of “Mr. Brightside” and “What’s My Age Again?”, the inner walls of the sequestered Rosemont venue reverberated with the orchestral flares of Zimmer’s finest compositions. For three hours, the blockbuster composer conjured up his strongest and most eclectic themes, leading a band, an orchestra, and a choir, who were all revealed in that very order to the whimsical scores of, yes, Driving Mrs. Daisy, Sherlock Holmes, and Madagascar. The audience oohed and aahed as each curtain pulled back to disclose another dozen musicians playing furiously. It was an overwhelming sight to behold, seeing so many human beings interact in unison, and likely explains why Zimmer neglected to have any footage from the respective films play to each theme.

It would have only been a distraction; there was just so much going on at any given time. Not only were there over 40 musicians on stage at once — percussionists, violinists, guitarists, brass musicians, guest vocalists, and the list goes on. — but the man himself rarely stuck to one instrument. Blink once, Zimmer would be plucking the banjo. Blink again, he’d be fiddling with synthesizers. And when he wasn’t playing, he was talking up a storm, either sharing stories on his collaborations with acclaimed directors or turning the spotlight on his many colleagues. One particular highlight arrived when he discussed how he nabbed the job for Disney’s The Lion King and stressed how much he appreciated working alongside South African producer and vocalist Lebo M, who he called “the real lion king” after the 53-year-old legend finished belting out the iconic themes only minutes beforehand. Later on, tears were shed when Zimmer recalled hearing the tragic news of Heath Ledger’s passing while working on The Dark Knight and then especially the Aurora shooting incident surrounding The Dark Knight Rises.

“I remember going to New York for the premiere,” he recalled over the film’s mournful tones, “and it went absolutely great, and the next day, we got into the plane for our European premiere. I remember arriving at my apartment in London really early in the morning, it was something like 6:30 or 7:00, and the phone rings and some journalist, he’s asking me to give my reaction, my reaction to the terrible shooting, the terrible tragedy, and it happened when they were screening our movie in a small town in Colorado, a small town called Aurora. And none of us had heard of it, we had been on the plane all night, so I said the first thing that came to words, I said, ‘Devastated.’

“And all day I was thinking about the victims and the loved ones they left behind and how a word is just not enough, and I phoned my friends in the choir at night and said, ‘Can we make a piece of music that uses no words, but it should feel as if we’re stretching out arms out, and we’re reaching across the Atlantic, and embracing the loved ones left behind in that small town of Colorado called ‘Aurora.’ And you know, the world hasn’t gotten any better since then: London, Paris, Brussels, Manchester, Syria, Venezuela, every day we hear about horrors and bloodshed, but just tonight, look at the stage, people from all nations, are all here for you Chicago. Let us play from our hearts…”

The way Zimmer was speaking, it was almost as if he was letting his mind go on cruise control, and it was rather hypnotic. Each word felt like one part of a long stream of consciousness, all of which was seemingly coming from the same emotional center that influences his work. It was a riveting meditation, to say with nothing but respect, and added a depth to the night that reminded everyone why Zimmer’s music is so impactful. Like any great composer, he doesn’t just score a film, he draws emotions out of every scene, and what has long made him a cut above the rest is how he’s been able to take those emotions and make them feel universal. Seeing him there with his eclectic and incredibly diverse group of talent only drove that point further home. Zimmer isn’t responsible for just outstanding film scores, but outstanding music, the kind that can bring the world together, if only because it was made by so many people across the world. Sure, that sounds preachy and cute and kind of insufferable come to think about it, but it’s hard to deny those feelings when they’re running down your face and burning your soul.

And to think, that was all before he even got to “Time”. 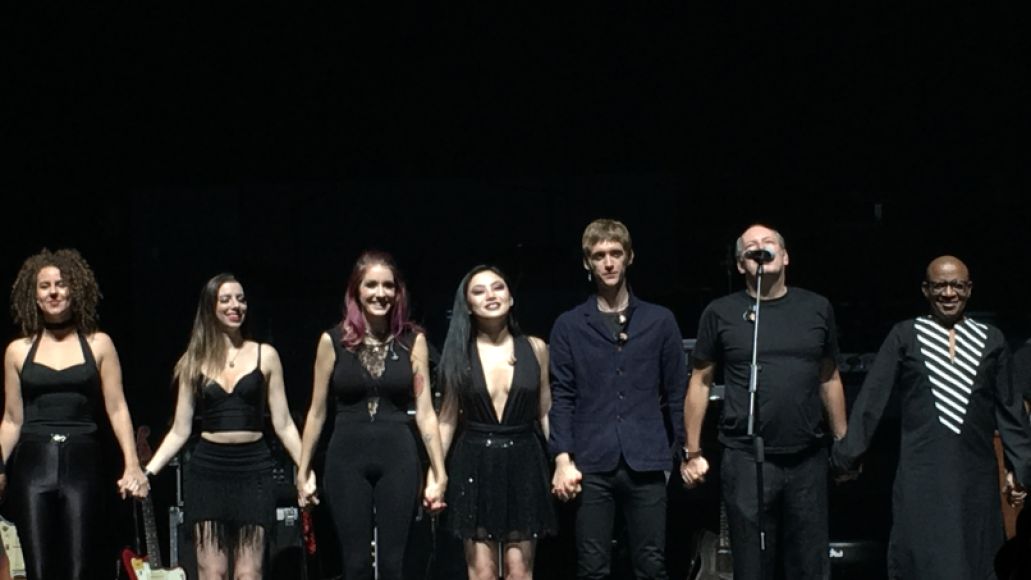 Superheroes
What Are You Going to Do When You Are Not Saving the World?
Is She With You?

The Dark Knight Suite
Why So Serious / Like a Dog Chasing Cars / Why Do We Fall?
Fear Will Find You / The Fire Rises / Gotham’s Reckoning
Aurora

Interstellar Medley
Day One
No Time for Caution
Stay