Peanut Butter and Jelly. Hall and Oates. Big Boi and Andre 3000. Weed and Netflix. At least in my social circles, it’s hard to think of one without the other. Netflix is apparently hip to this fact and has decided to cut out the middleman by curating a series of marijuana strains inspired by a few of their original series. There’s Banana Stand Kush for Arrested Development, which of course would be perfect for rolling into a “big yellow joint.” The more surreal aspects of Wet Hot American Summer: Ten Years Later will likely pair well with Camp Firewood, which is described as a “very chill indica.” Netflix won’t be profiting from the sale of the unique strains, which sell for about $65 an eigth (3.5 grams) and are sure to become collector’s items as the idea is a limited time promotion.

According to a press release, Netflix put a lot of thought into the selections, “Each strain was cultivated with the specific shows in mind, designed to complement each title based on their tone. For example, sillier shows may be more indica dominant, while dramedies will be more sativa dominant to help the more powerful scenes resonate.” Far out man.

The weed was made available at a West Hollywood pop-up run by Alternative Health Herbal Services as part of a promotion for the new Kathy Bates comedy Disjointed, in which a woman lives her dream of opening a marijuana dispensary. Reviews for the show have been mixed thus far, so perhaps Netflix should have sent critics one of the three strains—Rutherford B. Haze, the Omega Strain and Eve’s Bush—inspired by the new sitcom from The Big Bang Theory’s Chuck Lorre (although there isn’t any weed on earth strong enough to make The Big Bang Theory funny). 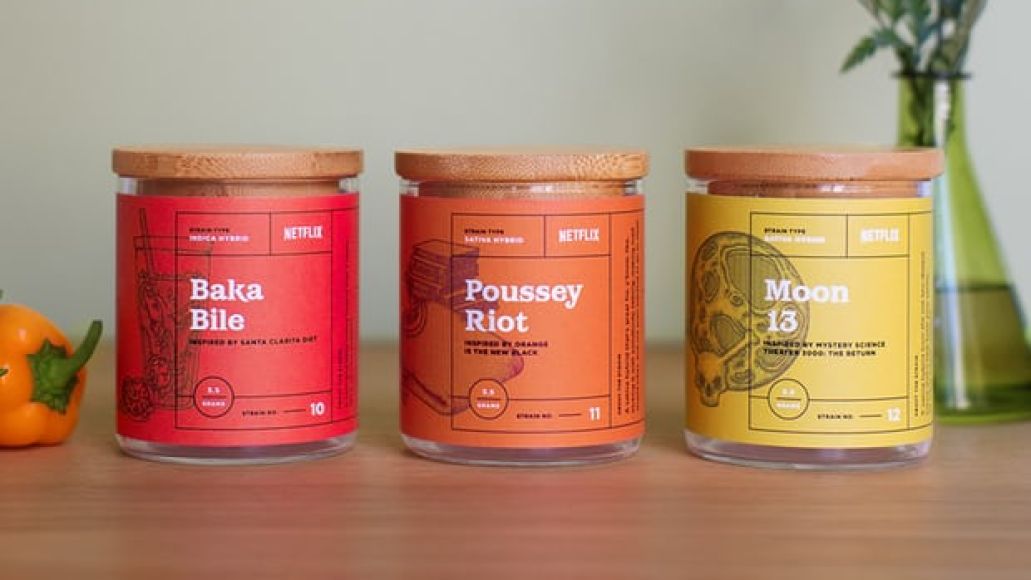 Orange is the New Black (Poussey Riot), Chelsea (Vodkush, for the “advanced botanist”) and that most prodigious of substance abusers, Bojack Horseman (Prickly Muffin: “When you smoke this, it gets a little easier. But you gotta do it every day.”), also got in on what this writer thinks is a fantastic idea that should expand far and wide. I mean, imagine getting a joint of Denim Jacket Haze with your copy of The War On Drugs’ excellent new album. Makes sense to me. Another fun part of this story is it probably makes Jeff Sessions as mad as he gets when he can’t enjoy any of the rides at Disneyworld due to height constraints. (Sad!)

No word yet on whether or not Netflix will continue this promotion, but if they do, I am perfectly willing to review how well the strains pair with each show for CoS. It’s a sacrifice I’m willing to make for the job—duty calls and I answer.

Netflix gets in on the marijuana business, selling strains of weed based on its shows