A common criticism you’ll see in response to the work of David Lynch is that he treats his female characters terribly. And while no one who’s seen at least one of his films, or has even the most introductory familiarity with Twin Peaks could dispute that, yes, women in his fictional worlds will, across the board, not have an easy path to follow, it could also be argued that he favors his female characters for having the strength to endure. The female characters that Lynch brings to life are not handled with delicacy. They’re put through the wringer, just as women are put through the wringer in real life. They’re often the center of mysteries, and smolder with a dark sexuality that, more often than not, drives the men around them to anger, insanity, or both. It’s not pleasant to watch a female character get punched or shot in the face, or hit with a bar of soap in a sock — all things that have happened just in Twin Peaks alone. But these are things that happen to women in real life and Lynch, a creative who takes real life and pulls it apart like taffy until it snaps, crafts female characters that rise to the occasion, even when that occasion is shoving them down.

Towards the end of “Part 14”, we see Sarah Palmer (Grace Zabriskie) turn to the foul-mouthed patriarchy mascot wearing a greasy t-shirt that says “truck you” and rebuke his violent advances with the warning: “Do you really wanna fuck with this?” It resonates more than it would if it were to be delivered by a male character because a.) It’s less expected b.) It’s something we all, male or female, wish we had the guts to say to someone bugging us while we’re just trying to enjoy a bloody mary at the bar. Lynch knows the power of underestimation. And he also knows, as we do, that a man would never have to worry about being in this situation in the first place. Being a woman is terrifying, and it’s terrifying to watch. Twin Peaks is no different than reality in that respect. 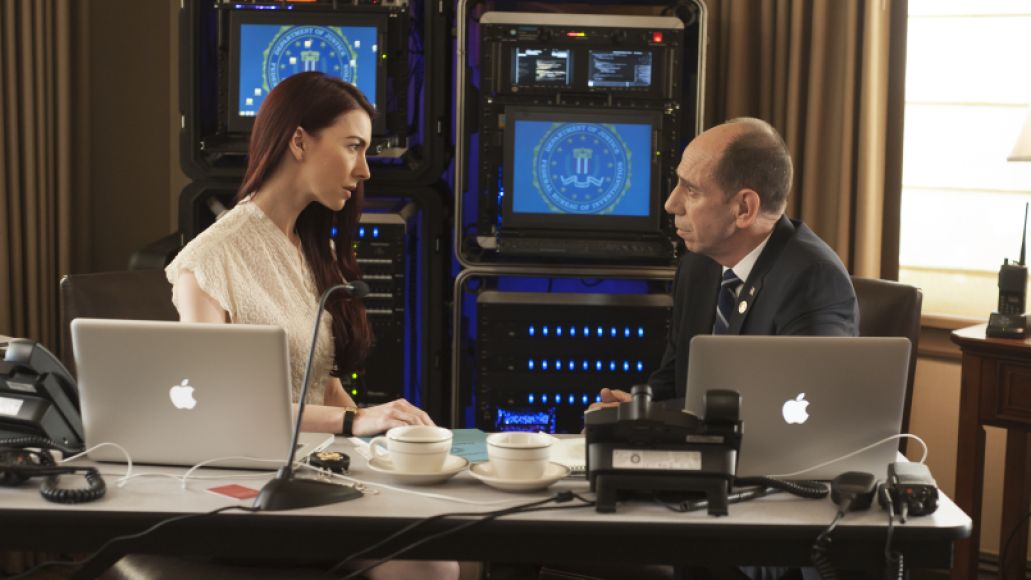 The title of this week’s installment, “We Are Like The Dreamer,” weighs 500 pounds. Left with the mysteries of “Part 13”, specifically the scene in which Audrey Horne (Sherilyn Fenn) tells her maybe husband/maybe psychiatrist Charlie (Clark Middleton) that she “feels like she’s someone else, and somewhere else,” we’re now given a deeper understanding of what that could have meant. At their temporary offices in Buckhorn, South Dakota, Gordon Cole (Lynch) tells Tammy Preston (Chrysta Bell) and Albert Rosenfield (Miguel Ferrer) that the previous night he had “another Monica Bellucci dream.” Bellucci is an interesting choice for this dream sequence because not only did she star in two of the Matrix films — a franchise that’s been referenced here in these recaps at least once, if not more, due to the similarity in “there is no spoon” themes — but she also played hands down the most horrific female role in the most horrific movie ever made, 2002’s Irréversible. So, if the douchebag who torments Sarah Palmer at the end of “Part 14” is Captain Patriarchy, then Bellucci here is Queen Matriarchy, appearing in Cole’s dreams to drop eggs of information that he’ll attempt to fertilize during waking hours. She tells him “We are like the dreamer who dreams, and then lives inside the dream,” then ends with the question, “But who’s the dreamer?”

After she says this, Cole turns around, still dreaming, and sees his younger self talking to Dale Cooper (Kyle MacLachlan) who tells him of a dream of his own — a dream within a dream — in which the long lost Phillip Jeffries (David Bowie) returns to the office on that very day, at that very time, which ends up actually happening. Appearing in the office like a disruptive buzz of static electricity, Jeffries points to Cooper and asks Cole, “Who do you think that is there?” We saw this first in Fire Walk With Me and are shown it here again, in reference to Cole’s dream, to be reminded that these are rocky waters we’re swimming in here, and, as we’ve also been told before, nothing is as it seems. To further the dream talk, at the end of “Part 14”, we sit with a young woman at The Roadhouse who we come to find is the daughter of Tina — the same Tina who Audrey and Charlie have been going back and forth about. The young woman tells her friend the story of the last time she saw Billy, who we think may be Audrey’s lover, when he frantically ran into Tina’s kitchen bleeding from the nose and mouth, which Audrey herself dreamt about in “Part 12”. Last week, I proposed the theory via Twitter that what we’ve seen so far on “The Return” may be solely taking place within the mind of Audrey Horne as she lay in a coma. Could it be that Audrey is “the dreamer?” That would essentially make these new “parts” like the last episode of Roseanne in which she was like “J/K, Dan actually died and nothing you thought was happening was actually happening.” To quote Cole, “This is really something interesting to think about.” 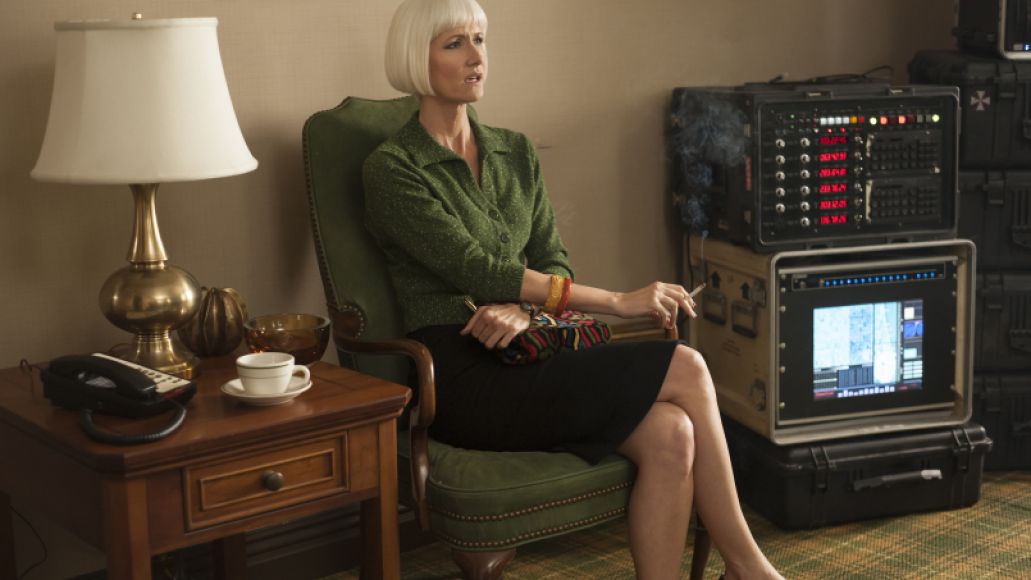 We learn so much more in “Part 14”, including the story of the first ever Blue Rose case, which took place in 1975 in Olympia, Washington. During her training as the Blue Rose team, Tammy is told this story by Albert, who explains that Cole and Jeffries went to a hotel in Olympia to arrest a woman named Lois Duffy, but when they got there, Lois had just been shot … by Lois Duffy, a doppelgänger. Her dying words were, “I’m like the blue rose,” and then she vanished before their eyes. Tammy points out that the significance of the blue rose is that it does not exist in nature, just like Evil Cooper does not exist in nature, and the manufactured Douglas Jones does not exist in nature. We also learn, in a surprising twist, that Diane’s (Laura Dern) half sister is Janey-E Jones (Naomi Watts) who she hasn’t spoken to in years. Diane tells Albert and Cole that last she knew her sister was living in Las Vegas and married to a guy named Dougie Jones. This is important information to them as they’re now in possession of Dougie’s wedding band, which was uncovered from within the dead corpse of Major Garland Briggs (Don S. Davis). It would make sense that Evil Cooper, who we are being led to believe raped and betrayed Diane under the guise of her longtime friend and co-worker, Dale Cooper, would take extra pleasure in planting his manufactured Dougie trap in the life of Diane’s own half-sister as a way to further twist the knife he already plunged in.

“Part 14”, perhaps more than any of the other parts so far, takes place primarily in Twin Peaks proper. Or, you know, what we think is Twin Peaks. The town and its aging inhabitants throw a lot on our plates in rapid succession. Deputy Bobby Briggs (Dana Ashbrook) leads the way to Jack Rabbit’s Palace, a place near his dad’s old station where father and son would exchange “tall tales.” The teams fill their pockets with dirt from the area, per Garland’s instructions never to wander the area without it, and then follow his coordinates to a spot shrouded in mist and electric hum where they discover the naked body of Naido (Nae Yuuki), who vanished into space in “Part 3”. A portal opens up in the sky sucking in Deputy Andy Brennan (Harry Goaz) and he finds himself in the black and white room (possibly the White Lodge?) with the person we believed to be The Giant (Carel Struycken) who introduces himself as The Fireman. 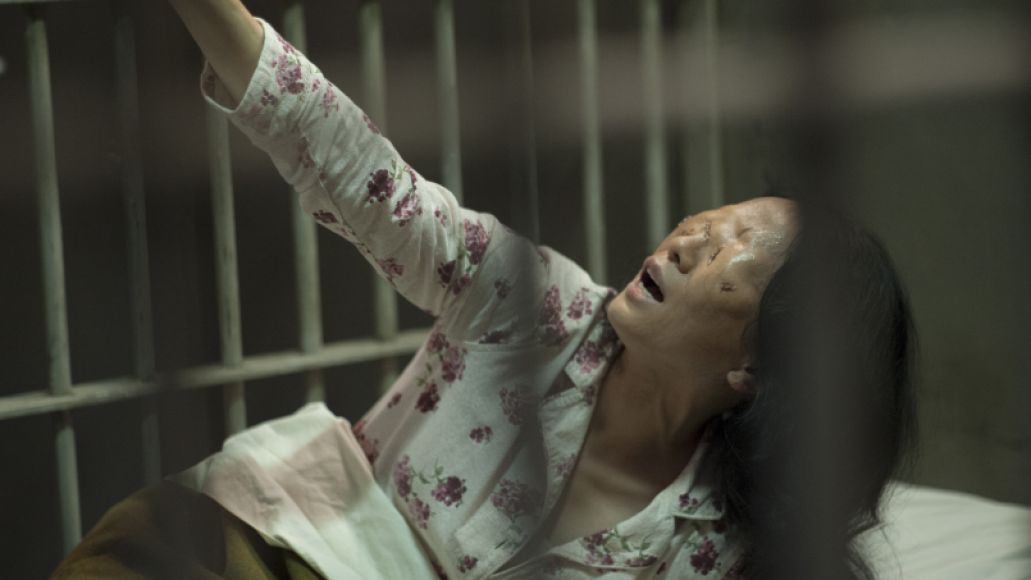 The Fireman delivers a series of messages to Andy via a circular window/mirror that appears over his head that include flashes of The Experiment birthing BOB, the telephone in the Twin Peaks police department, Lucy Moran (Kimmy Robertson) being led into a room, and a photo of Laura Palmer (Sheryl Lee) bookended by two angels. At the end of this, Andy re-appears in the woods carrying Naido, who he tells the rest of the crew is very important and needs to be protected in a cell back at the police department because people want to kill her. At the police department, Lucy gives her a fuzzy pink robe to wear and then leaves her to chirp back and forth with the horrifying drunk in the cell across from her, who is bleeding from the mouth. Maybe this is Billy? Remember, Audrey dreamt about him bleeding from the nose and mouth, and Tina’s daughter described the blood coming from his mouth as pooling up on the floor in her kitchen, just like this nightmare in the cell is doing.

Meanwhile, over at The Great Northern, James Hurley (James Marshall), who appears to be employed there as a security guard, tells his young friend and co-worker Freddie Sykes (Jake Wardle) that it’s his birthday in exchange for the story behind why Freddie wears a rubber garden glove on his right hand. Freddie tells him that while returning home from a night at the bar in London, where he’s from originally, he got to thinking about how he was wasting his life. While mopping around, he came upon a stack of boxes that he decided to jump upon, as drunk people do, and then got sucked into a vortex in the air where he met with the Fireman. The Fireman told him to find the glove, put it on his right hand, and then move to Twin Peaks to fulfill his destiny. Seeing as though having the glove on his hand makes that hand as powerful as a pile-driver, can we assume that his destiny is being strong enough to thwart an otherwise un-thwartable villain? Someone like Evil Cooper perhaps? Seems a bit too Marvel universe for a Lynch production, but we’ll see. 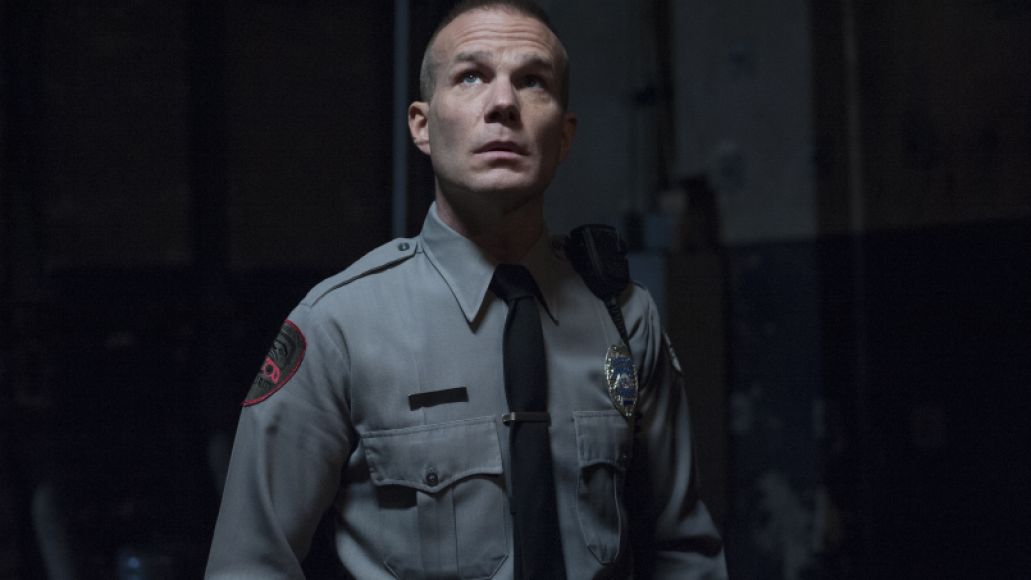 Full-circle back to Sarah Palmer getting harassed by the “truck you” fucker at the Elk’s Point #9 Bar: I could tell you the story of how I was once physically pulled off a stool at the Turkey’s Nest in Williamsburg by a drunk guy who had lived a full life being told that drunk guys can get away with such a thing, and how I wished then, and wish now, that I could have pulled my face off revealing a vast darkness concealing leering evil teeth (I told you Experiment wasn’t “Mother,”) and growled “Do you really wanna fuck with this?” But it would be more appropriate to end with Sarah’s own words here as we wrap up this massive installment…

— “We are like the dreamer who dreams, and then lives inside the dream.” –Monica Bellucci

— “Do you really wanna fuck with this?” – MVP Sarah Palmer

— I bet we get a father and son reunion between Evil Cooper and Richard Horne. 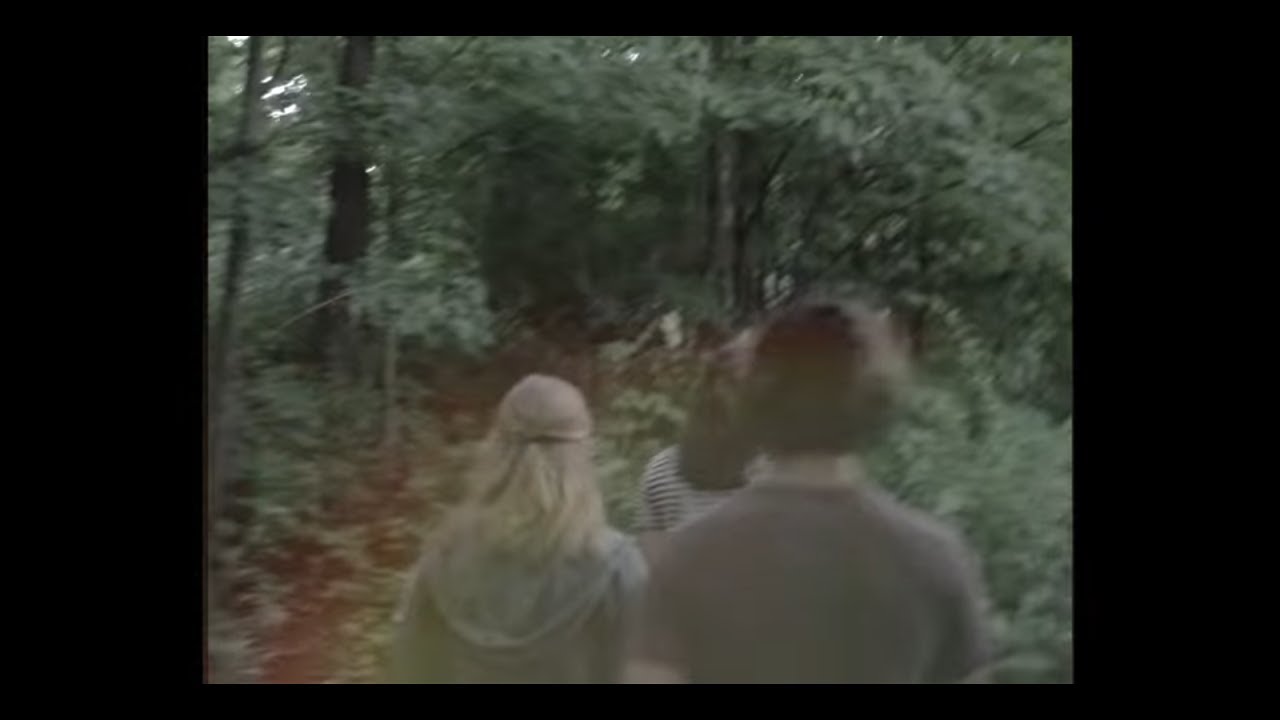