Dusting ‘Em Off is a rotating, free-form feature that revisits a classic album, film, or moment in pop-culture history. This week, Dan Caffrey revisits the summer of 2007, when Rob Zombie brought Halloween a couple of months early.

For me, Rob Zombie could have been the Adam Sandler of horror directors. No matter how far the The Sandman slips into a Netflix-funded slumber of bad comedy, he still gave us Billy Madison and Happy Gilmore — two films that mean just as much to me as Jaws or Alien.

For Zombie, his Billy Madison could have been his directorial debut, 2003’s House of 1000 Corpses. Nonsensical in plot, you come (and stay) for the inventive kills and pop-culture fetishization of everything from Marx Brothers films to ’70s grindhouse cinema. Where Billy Madison dresses one of its best gags as a giant penguin, Corpses puts its victims in rabbit costumes. Neither film has much in way of story, but both are brilliant in aesthetic.

If House of 1000 Corpses is Zombie’s Billy Madison, then 2005’s The Devil’s Rejects is naturally his Happy Gilmore: a riff on the same formula, but with more heart. By relocating the Firefly family from a depraved DayGlo funhouse to an even more twisted killers-on-the-road movie, we start — gulp — caring for them, even though we shouldn’t. That’s a lot easier to do when the film looks like Easy Rider and not, well, a Rob Zombie video. It’s a lot easier to do when, in a shot borrowed from Butch Cassidy & The Sundance Kid, they go out in a hail of bullets to the sound of Lynyrd Skynyrd, the band that also happens to precede the end credits of Happy Gilmore. With such a memorable climax, I would have forgiven Zombie for any misstep that came after The Devil’s Rejects.

Then he had to go and fuck with Halloween. 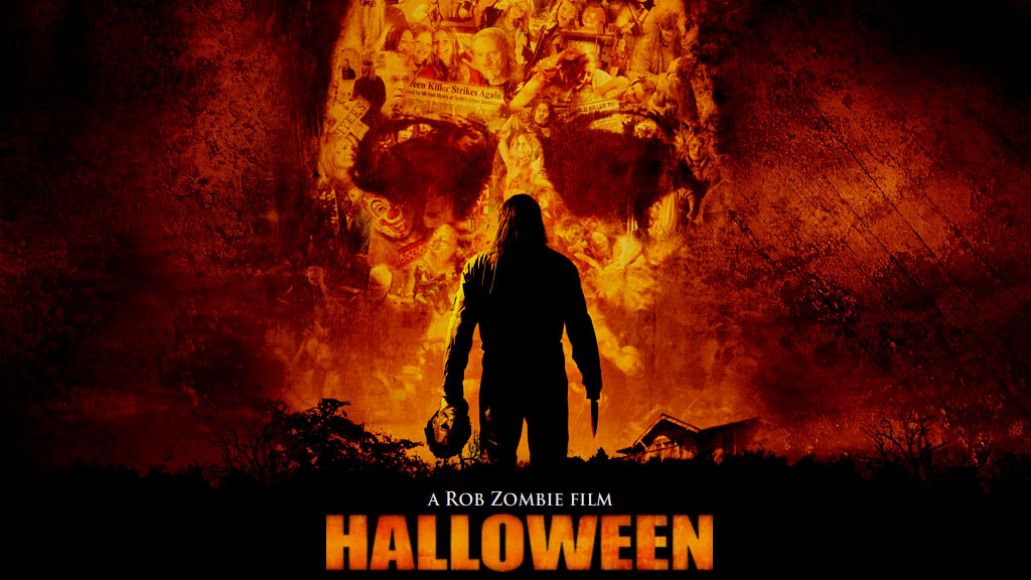 I probably don’t need to tell you why Halloween is an unassailable classic (my favorite movie of all time, if we’re being honest), but in case you haven’t watched it in a while, here’s a refresher: When serial killer Michael Myers escapes a mental institution 15 years after stabbing his sister death on Halloween night, we’re never given an explanation as to why. We don’t know what inside him snapped and made him murder his sibling. We don’t know why he sat in silence for over a decade before making his next move. We don’t know why he goes back to his hometown of Haddonfield, Illinois to claim more victims. To quote his psychiatrist and eventual hunter, Dr. Samuel Loomis, Myers is “purely and simply … evil.” There’s a reason the killer’s mask is a blank, white face — director John Carpenter wanted the audience to be able to project whatever was scary to them onto the visage. Myers’ motives are nondescript, and so is his appearance.

I’m not the first person to point this out the genius simplicity of Halloween, and even if I was, you wouldn’t need me to. It’s all there in plain sight for anyone who watches the movie. That’s the beauty of being simple. It rarely needs explanation. Rob Zombie, however, did feel the need to explain Halloween. 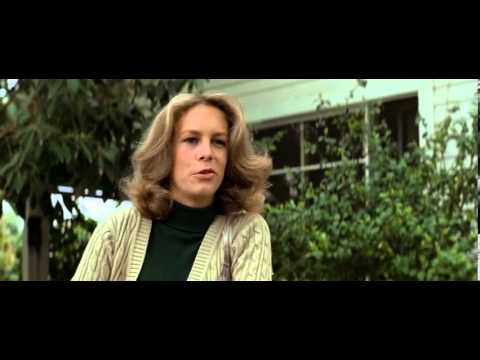 And hey, you know what? That’s fine by me. People always decry Zombie’s delving into the psychology of Michael Myers as being the fatal flaw of his 2007 remake. But it’s not. His fatal flaw is his failure at both synthesis and juxtaposition; his (or, as he claims, the studio’s) insistence that the film still retain a large portion of, in his words, “John Carpenter-ness.”

Whether keeping a good portion of Carpenter’s original dialogue and story intact was the doing of Zombie, Dimension Films, Trancas International, The Weinstein Company, or some combination of all of them isn’t the point. All that matters is Zombie’s Halloween is a mess because the film’s two disparate halves only work against each other.

When the film begins, it’s the miniature inverse of Carpenter’s original film. Rather than leave the motives of Michael Myers mysterious, Zombie plumbs the Psychology 101 textbook of film cliches to explain why the boy becomes a monster. In the opening scene, a 10-year-old Myers (Daeg Faerch) is seen killing his pet rat, his sadism either stoked or directly caused by his domestic situation. Outside of his caring mother (played by Zombie’s wife, Sheri Moon Zombie), everyone in young Michael’s life treats him like shit, from the sister he eventually kills (Hanna R. Hall) to her boyfriend he eventually kills (Adam Weisman) to the bully he eventually kills to the abusive stepfather he eventually kills. And as if we weren’t given enough overly exposited motivation, once Michael gets hauled away to Smith’s Grove, we get even more pseudo-psychological babble from Dr. Loomis (Malcolm McDowell). As he explains, Michael keeps constructing and hiding behind paper mache masks because he’s cutting himself off from the world, drawing further into himself as he becomes the hulking killing machine in the second half of the film (Tyler Mane).

Of all Michael’s early victims, the stepfather, Ronnie (William Forsythe), is most guilty of — to turn a phrase from Zombie himself — “Rob Zombie-ness”, spewing the pseudo-Tarantinoisms that the director probably likens to some form of gutter poetry. Some choice phrases heard in just the first two minutes of the film: “Man, that bitch got herself a nice little dumper.” “Bitch, I will come over there and skull-fuck the hell outta you!” And, “Maybe I’ll choke the chicken, purge my snorkel all over them flappy-ass tits” — a line that proves when it comes to dialogue about masturbation, one should never mix metaphors. 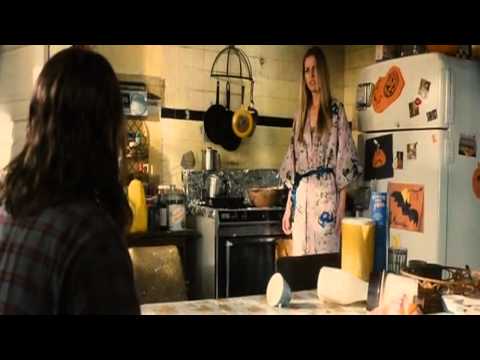 Laughable as all of this is, the film at least has an identity. When mixed with evocative sights and sounds from Zombie’s ’70s spank bank (it’s never exactly clear what era the film takes place in), the vulgarity almost works as a polished kind of exploitation film. In one brilliant sequence, Michael’s mom pole-dances at the Red Rabbit lounge to Nazareth’s cover of “Love Hurts” as Michael sits on the curb by himself. Decked out in his iconic clown outfit, he weighs his options as the autumn wind blows leave across his shoes. None of this exactly qualifies as Ingmar Bergman or anything (or even early John Carpenter), but it’s definitely its own thing.

Had Zombie stayed in this trash-as-treasure mode, maybe his Halloween could have gotten by simply on its status as a curiosity, worthy of its own attraction in Captain Spaulding’s roadside Museum of Monsters & Madmen in House of 1000 Corpses. Instead, after keeping us with young Michael for nearly 40 minutes (the original film jumps forward in time after just four), Zombie’s Halloween becomes nothing more than a faster and harder version of the original. Myers’ slow, dread-building sojourn through Haddonfield becomes sped up, with him leaping from hedges to kill instead of slowly stepping out from behind them to frighten. The body count rises, as do his vocalizations. Whereas in the original film, he occasionally breathed audibly and heavily, here, he practically screams whenever he drives his knife through someone. Carpenter recently described his vision of Michael Myers as being “like the wind.” Zombie’s is like a cyclone. The director’s cut of the film adheres even more to the Daft Punk approach of harder, faster, stronger, all while forgetting the “better”. For instance, before Michael’s escape from Smith’s Grove, Zombie includes a scene of two orderlies raping a mentally challenged patient in front of him for no reason other than to shock.

Now, a film that takes a tonal, visual, or narrative left turn can often be astonishing. Just look at Stanley Kubrick’s Full Metal Jacket, which begins as a grueling examination of how young men get broken down and transformed into killing machines during wartime. Then, in a single shot, we’re transported to South Vietnam, the camera dissolving from the toilet-bound corpse of Private Leonard “Gomer Pyle” to a hooker seductively walking toward Sergeant James “Joker” Davis (Matthew Modine). For much of the rest of its runtime, the film makes Joker’s time in the shit seem rather carefree. The rest of the troops even go to great lengths to point out how he hasn’t been afflicted by the thousand-yard stare that seems to affix itself to the face of every other grunt. 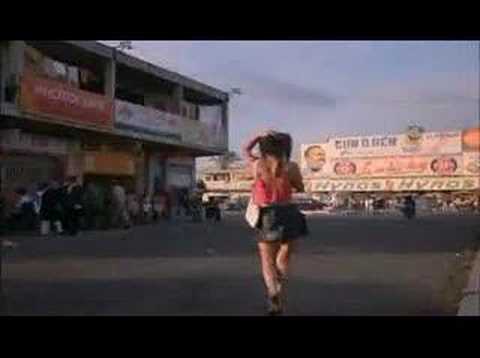 And so it becomes clear that the audience has been tricked. By the end, we see that Joker has been affected by the war. After mercy-killing a female sniper gunned down by one of his squad, he does indeed take on the same glazed-over, stone-faced look as his brothers in arms. I’d argue that the look was inside him all along. It came to life as soon as he saw Private Pyle take the life of their drill instructor, then his own just a few moments later. It just doesn’t come to the surface until the end of the film. There’s suddenly a reason for the two opposing halves.

But in Halloween, there’s no reason other than someone wanting to maintain a strong connection to the original, taking many of the exact notes of Carpenter’s plot, music, and dialogue, then piling on more tits, gore, and profanity. A huge problem with this is that Zombie and Carpenter have completely different styles as director. Whereas ’70s Carpenter is patient, methodical, and quiet until it’s too late for his characters, Zombie is loud, brash, profane, and decidedly in your face. Remember, he’s been a shock-rocker longer than he’s been a filmmaker.

And that isn’t a bad thing when he’s able to stick to his guns and keep his visuals unique (see 31 for a complete failure in that latter department). But when he’s shoehorning another director’s vision into his own — a director with a polar opposite aesthetic, nonetheless — the end result is disjointed.

Just two years later, Zombie would get to write and direct his own sequel, a sequel where he wouldn’t have to worry about being tied to the original film or any of its later installments. The resulting Halloween II is far superior to its predecessor, if only for its consistency and its terrifying first half hour. Although that stretch eventually gets undercut by an it-was-just-a-dream explanation and the rest of the film succumbs to more psychobabble from its various unlikable characters, it’s still a 30-minute example of what could have been.

Like the original Halloween II, the beginning kicks off moments after the first film ended, following a wounded Laurie to Haddonfield Memorial Hospital, with the still-living Michael Myers not far behind. But the similarities end there. What follows has nothing in common with the original Halloween II outside of the two main characters and the setting. The supporting roles are different; the violence effectively transports Zombie’s grisliness to a stark, clinical setting (thus inadvertently marrying his style with Carpenter’s and Rick Rosenthal’s); and he makes unbearably creepy use of The Moody Blues’ “Knights In White Satin”.

With his first film, Zombie rightfully praised the appearance of his team’s Michael Myers, saying: “Not since 1978 has The Shape looked so good.” With the first third of Halloween II, he showed that, in some alternate universe, maybe he could have created a Halloween film that didn’t just look good, but actually was good. 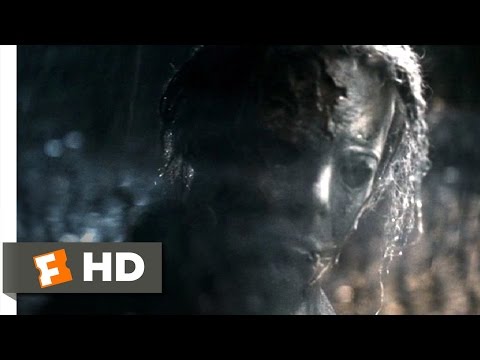