In memory of Jerry Lewis, we’re revisiting this article about his most mysterious project, The Day the Clown Cried.

“It’s either better than Citizen Kane, or the worst piece of shit anyone ever loaded on the projector” – Jerry Lewis to Entertainment Weekly

The Day the Clown Cried. A cinematic urban legend that has never died or gone away. Just when you think it would finally go forgotten, a new story pops up about it, and more snippets of footage appear on YouTube. Last year, the news broke that it may actually be shown one day. This year, a documentary made it to YouTube featuring never-before-seen, behind-the-scenes footage.

Film buffs who aren’t aware of this infamous cinematic stink bomb become intrigued when they hear about it. A Jerry Lewis movie so bad it couldn’t be released or shown? How does that happen? Lewis put out plenty of movies that were just god awful. How bad can this movie really be?

The Day the Clown Cried was going to be Jerry Lewis’ Schindler’s List. The famed comedian would tackle the holocaust, and this would be the first serious feature he would ever direct. Lewis’ idea of Oscar bait? A comedian who makes fun of Hitler is captured by the Nazis and forced to entertain children in the concentration camps before they’re marched off to the ovens. 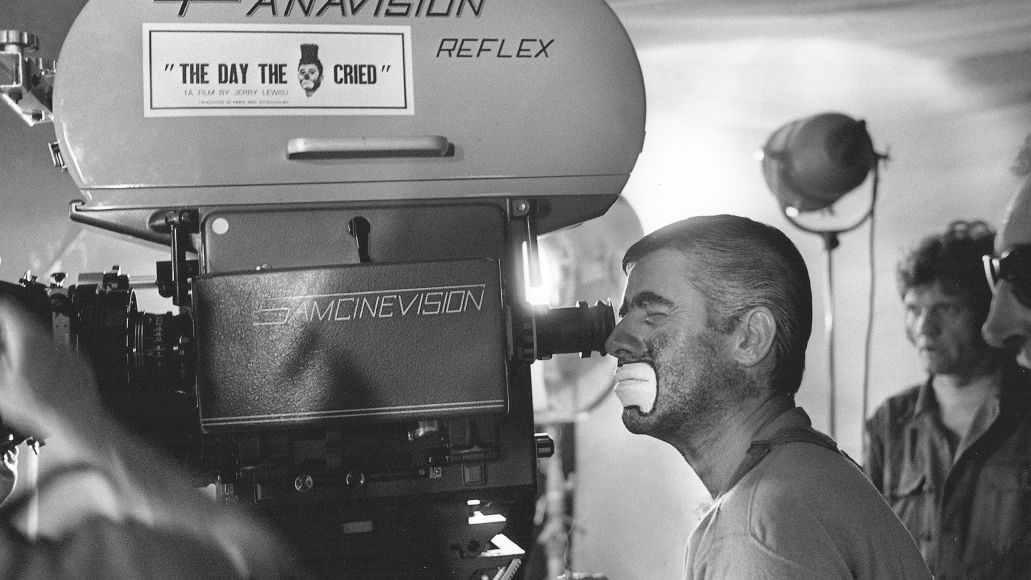 This would be a very difficult movie for the most skilled director to pull off. In the hands of Jerry Lewis, the capacity for unchecked arrogance and bad taste is boundless, and while it’s hard to judge the film sight unseen, we doubt Lewis is keeping it from the public because it’s too good to be shown.

Lewis has always vowed that the film will never been seen, and God help you if you ask him about it in interviews. You’re usually warned well in advance that the subject is off limits, and broaching it would be like using grenades for suppositories, except grenades take longer to explode. (Journalist Shawn Levy was one of the brave few who dared to ask Lewis about the film, provoking an enraged tirade from the comedian that left the writer badly shaken for weeks.)

Yet again, the news broke last year that a print of the film was submitted to the Library of Congress, with the provision that it not be screened for 10 years. If Clown will one day be shown, apparently Lewis doesn’t want to be around to see it happen. (He turns 90 this year.)

So what is it about The Day the Clown Cried that has made it the holy grail of bad movies? There are other barely seen cinematic oddities, like Billy Jack Goes to Washington, which never made it to theaters, and when it was finally released on DVD some years back, it was greeted with complete indifference by the public. 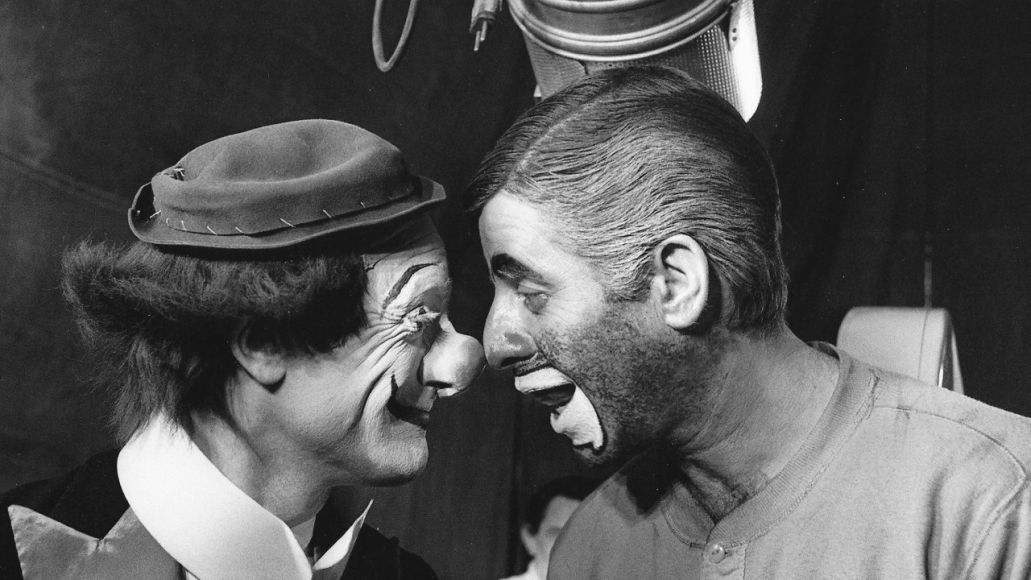 Lewis biographer Shawn Levy probably sums it up for many of us when he says the interest in Clown is the “the inconceivable oddness of it. Jerry Lewis is still such a strange and singular bird that I think the very concept is intriguing. And the people who’ve seen the film and spoken about it – Harry Shearer, say – are so vivid in their description that they’ve made it a holy grail. Plus, the fascination with grindhouse, Ed Wood, and movies so bad they’re good (a dubious category) virtually insures there’s a cult for something like this.”

Oh yes, Harry Shearer has indeed seen it, and it’s been comic gold for the comedian ever since. He’s talked about it at length on the Howard Stern Show, and Stern even expressed interest in putting out the movie himself. As Shearer once told Spy magazine, “The closest I can come to describing the effect is if you flew down to Tijuana and suddenly saw a black velvet painting of Auschwitz.” That would make a great quote for the BluRay cover, no?

The real question is once we finally see the damn thing, can it possibly be worth the wait? Could it be so bad that it’s brilliant, like Plan 9 from Outer Space, or so bad they’ll use it to torture prisoners in Iraq? Until it’s out in the world, of course, we’ll never know, but Shearer has said it lived up to his expectations, which gives us hope it will live up to ours, too. 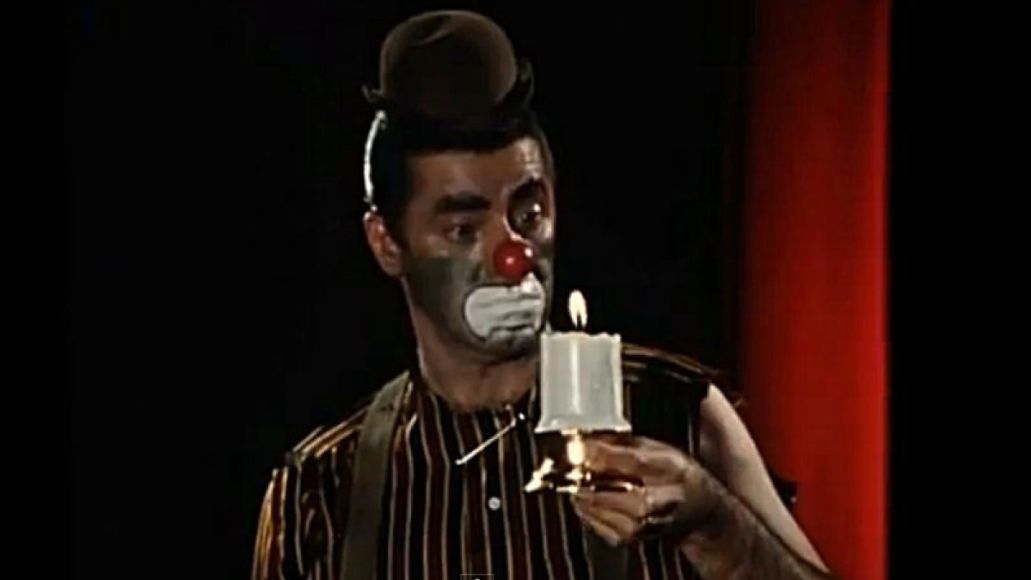 As Shearer continued, “With most of these kinds of things, you find that the anticipation, or the concept, is better than the thing itself.” And indeed, a lot of obscure cinema oddities like this remain obscure for good reason, and once you actually see them, you realize they are indeed more fun to read about than actually watch. “But seeing this film was really awe-inspiring, in that you are rarely in the presence of the perfect object. This movie is so drastically wrong, its pathos and its comedy are so wildly misplaced, that you could not, in your fantasy of what it might be like, improve on what it really is.”

Of course, if Jerry Lewis would just put the damn thing out in the world, all of this would come to an end. People would see the movie for what it is, and all curiosity value for it would end immediately. But, of course, Lewis, being as hardheaded, stubborn, and impossible as he is, will insist on keeping his personal bogey man in the closet, which will make people even more curious to see it.

Perhaps Lewis likes the fact that by doing absolutely nothing, the legend of this film continues to grow. One of the few times he ever addressed the subject was for Entertainment Weekly, where he said, “After I’m gone, who knows what’s going to happen? The only thing that I do feel, that I always get a giggle out of, some smart, young guy is going to come up with an idea, and he’s going to run the fucking thing. I would love that. Because he’s going to see a hell of a movie!”

Lewis also added that Clown is “either better than Citizen Kane or the worst piece of shit that anyone ever loaded on the projector.” Gotta love a filmmaker who has no interest in “middles.”

While Lewis’ biographer may consider movies so bad they’re good to be a dubious category, I for one can’t get enough of them, which makes me, and other fans of this kind of stuff, salivate for the eventual unveiling of The Day the Clown Cried. It’s a trip to think that the next cycle of Star Wars films will be complete by the time we finally see Clown. Come to think of it, all the Avatar sequels may be out by then, too, but I’m still looking forward to the day that I can go around and tell people that I’ve actually seen The Day the Clown Cried, which, for a bad movie fan, will be a bigger thrill than seeing Star Wars before your friends do.

The Day the Clown Cried: The Unseen Movie That Refuses to Die