The devil of Hell’s Kitchen. The hero of Harlem. The pissed off PI. The living weapon of K’un Lun.

Okay, on paper it doesn’t sound as exciting as Iron Man, Captain America, Thor, and the freakin’ Hulk teaming up in The Avengers, but somehow Marvel and Netflix bringing four heroes together for The Defenders still feels like a huge undertaking. Anticipation hasn’t been as wildly stoked for the small screen super team, and there are a number of logical reasons for that. For one, it took Marvel Studios four years and five films to get to The Avengers, while Marvel Studios reached The Defenders with as many entries in half the time. The constant influx of new material to digest meant there just wasn’t enough time to build up the appetite for the main course. Call it an unfortunate side effect of binge consumption culture.

Chipping away at the hype even more was the relative diminishing returns of each solo outing from the Defenders themselves. Daredevil and Jessica Jones are the high-water marks — let’s call them the Iron Man and Captain America: The First Avenger of the group. Luke Cage was the Thor, enjoyable with its unique vibe, although not as engrossing from beginning to end as the other blockbusters. Then you’ve got Daredevil season two, which logically fills the Iron Man 2 role as an emotionally tense follow-up that isn’t quite as successful as its predecessor. Which leaves Iron Fist as the ugly stepchild of the bunch, aka The Incredible Hulk. 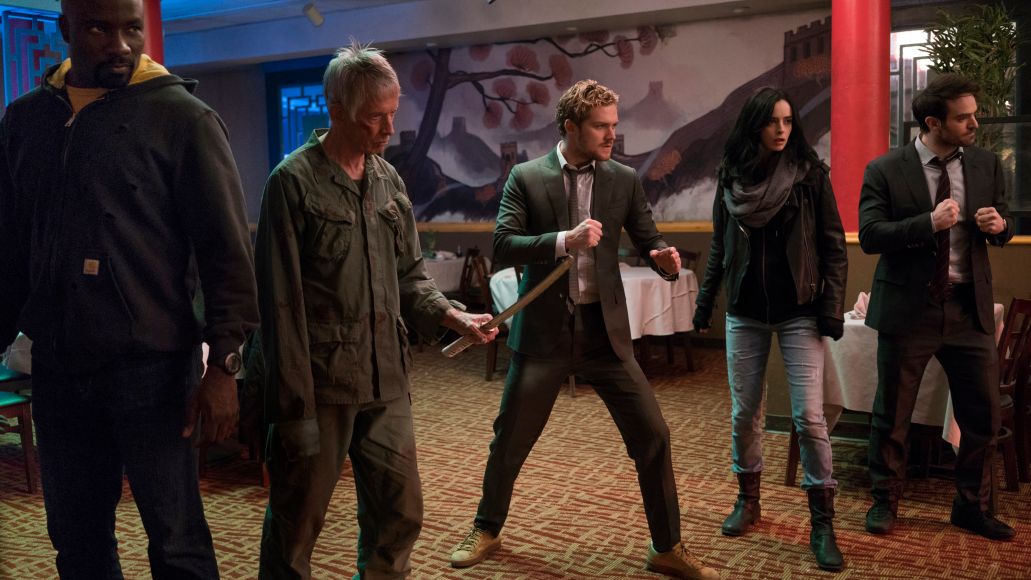 Overall, The Defenders does well to regain some of the momentum the Netflix Marvel Cinematic Universe lost over the past year. There’s plenty to enjoy in watching the heroes come together against their personal desires, and many of the stronger aspects of the separate series are migrated into the joint adventure well by showrunner Marco Ramirez. (He had some practice, after all, as he handled Daredevil’s similarly character-heavy second season.) Unfortunately, some of the things that didn’t work are also present, chief among them being pacing.

The dragged unfurling of plot is what kept Luke Cage from being an unimpeachable win and weighed down Iron Fist’s already tiresome characters. It’s apparent through the first three sluggish episodes of The Defenders that few lessons were learned when it came to story mapping. Part of that is due to Ramirez having to deal with threads from each individual series that aren’t necessarily connected to the central plot. Last we saw Cage (Mike Colter), he was heading to jail; Matt Murdock (Charlie Cox) had disbanded his law firm with Foggy Nelson (Elden Henson) and “come out” as a vigilante to Karen Page (Deborah Ann Woll); Danny Rand (Finn Jones) was coming to terms with what a terrible Iron Fist he made; Jessica Jones (Krysten Ritter) had just killed her tormentor and was suddenly faced with being a celebrity private investigator. Properly exploring how each hero deals with their circumstances is something that requires a number of episodes — which is one of the predictable flaws in trying to recreate an Avengers-style team-up in a serialized format. Films are generally more self-contained, with most arcs concluded by the time credits roll. With a TV show, you’re really laying groundwork for a second season; when you have to pause each individual narrative so that you can have a super team, you’re going to end up missing a few beats.

(Read: Are Marvel’s Netflix Shows Better Than Their Movies?)

Not that Ramirez fails completely with the edict, but an eight-episode season only provides so much space to satisfactorily tie up all the ends. To be fair, The Defenders doesn’t have to — we already know that the characters will return to their solo adventures soon enough. Still, though the writers do their best to move forward on some of the series’ storylines, they must move on to the world domination-level threat, and that means some things get brushed over.

Balancing all those necessary plot elements is tough, which is why those first three episodes are a bit of a slog and rushed simultaneously. Episode one is very much focused on the individuals, with audiences learning where Murdock is in life, what Cage is going to do once he’s out of jail, and how Jones is handling her sudden notoriety (she’s an alcoholic so here’s a hint: it’s not well). Iron Fist is the most directly connected to the antagonistic thrust of The Defenders — spurred by Sigourney Weaver’s deliciously cold Alexandra — and, if anything, the show feels at first like an extension of his own story more than anyone else’s. The same could almost be said for Daredevil, who fought the mysterious The Hand in his most recent season. Unlike Rand, however, there are loads of emotional threads within his narrative that crave resolution, and we very simply can’t have it. Ramirez and his co-writer Douglas Petrie do what they can to give us a little something of everyone, yet the nagging need to get these characters together on a singular quest is palpable for the first two hours of the series. 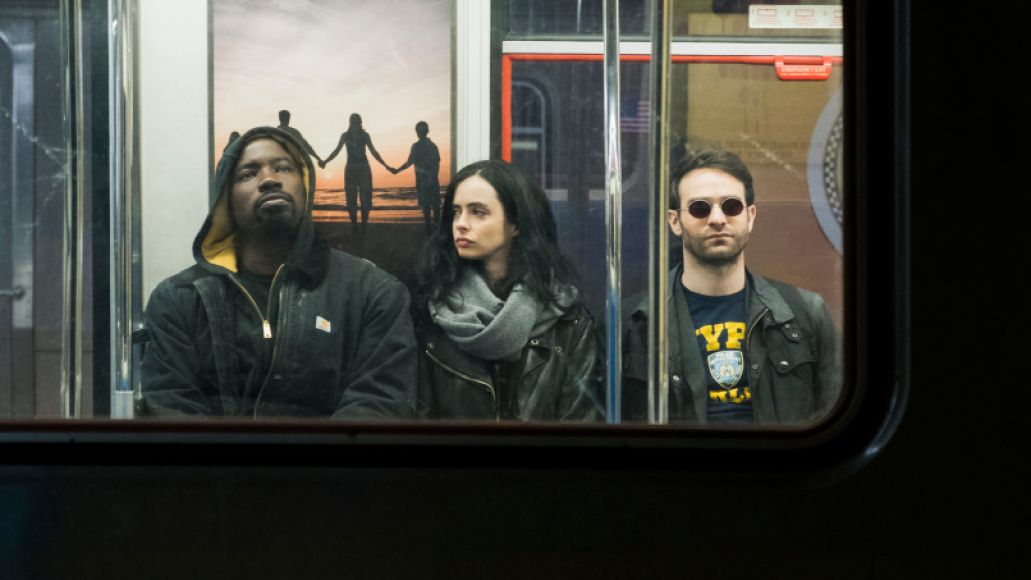 Despite the pacing woes, there’s actually a lot of clever artistic choices throughout those first few episodes. Transitions are handled with an effect like the flipping of a phoropter’s lenses, each time landing on a different color palette and scoring style. It’s all very appropriate for each hero and a neat trick, but at the same time it highlights how the first two episodes still seem like separate shows that are being spliced together. The main characters don’t even start interacting until episode three. It’s smart to have side figures like Foggy and Misty Knight (Simone Missick) act as bridges between the heroes, and it’s actually a relief that Rosario Dawson’s Claire Temple isn’t blatantly shoved into an Agent Coulson-like role. At the same time, you can’t help itching for Cage and Rand to finally meet and to see how Jones reacts to a take-no-shit weirdo like Murdock. When it finally does start happening, it’s done smartly, with characters that are weakly connected to the plot (Jones and Cage) paired off with those more intimately tied in (Daredevil and Iron Fist, respectively).

Thankfully, the payoff is nearly worth the wait. Watching Iron Fist and Luke Cage, two characters very closely connected in the comics, finally team up is one of the most satisfying geek moments of the entire series — so much so that I wish they’d lingered on that one shot just a bit longer (you’ll know it when you see it). It helps that Finn Jones’ fighting ability seems to have improved, and the stunt team took care to highlight each individual’s distinct combat style. Daredevil’s struggle with getting back into the fighting game is taut with intensity, evidence that he’s the most engaging of the bunch and played by one of the best actors on the series. Jones comes off rather needlessly boorish during the whole uniting process, though it’s hard to say that’s terribly against character. Besides, Ritter still nails every one of her quips and digs with the perfect amount of self-loathing and intelligence, a solid counterweight to the other three’s relative playfulness. Even Iron Fist’s most insufferable characteristics manage to get tempered by his new companions — though he’s of course still a complete idiot almost every step of the way. 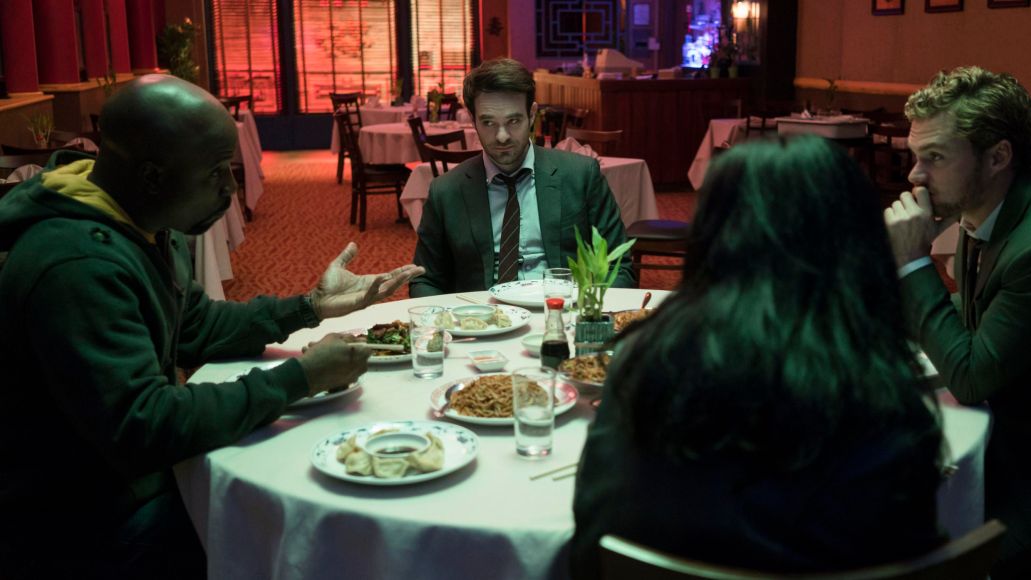 Not everyone gets their due by the end of episode four, though, chiefly Elektra (Elodie Young). The femme fatale hasn’t been well served in the NMCU, reduced to no more than a personified McGuffin rather than the rich, self-sufficient badass she is in the comics. Of the major dramatis persona, she is by far the least dramatically appealing. That’s clear from her first encounter with Daredevil; the last time he saw her, she was dead, and yet his reaction to her being alive (um, sort of) is five seconds of cliché. Cage and Jones’ reunion also falls flat, largely because it happens mid-fight, although there’s some redemption by the end. Weaver’s villain is a bit slow to unfold as we aren’t made privy to her true stature until the fourth episode; we’re introduced to her and told to understand she’s the Big Bad without knowing anything about her power, influence, or motivation. The weak first encounter is slowly strengthened with each one of her scenes, so we can only assume it gets meatier in the series’ back half.

Then again, everyone knows pacing has always been the NMCU’s achilles heel. It’s not nearly as damaging here as it was during Iron Fist or even Luke Cage, but when the fourth episode takes place almost entirely in a Chinese restaurant that serves exposition, you know it’s still an issue. Even so, the exposition is at least pretty tantalizing, answering a lot of the questions that had been seeded over the last two years. The discussion also does a nice job of showing how and why these four very disparate personalities — Iron Fist’s naive purism, Cage’s solicitous instincts, Daredevil’s reluctant rage, Jones’ selfish facade — will eventually ally themselves for the greater good. Save for the Fist, none of these people want to be defined as heroes, and their union is earned watching them come to terms with the fact that in order to protect the things they care about, they’ll have no choice but to become Defenders.

(Ranking: Every Marvel Film and TV Show from Worst to Best)

Ostensibly, that follows a similar formula to the truly cinematic side of the MCU, yet what Netflix and Marvel has done with their streaming branch of things maintains a feeling of uncharted territory. Combining four serialized stories into one eight-hour-long event is unheard of, and the results prove it’s considerably more challenging for very different reasons. Ramirez and his team do just enough to pull it off, and while the end result isn’t necessarily as marvelous as the Marvel films, it’s still mightily impressive.

The Defenders Protect Marvel's Legacy on Netflix as Best They Can