It wouldn’t be a stretch to assume Emmy-nominated TV shows bring in a plenty of viewers or at least have earned name recognition. According to a new survey from Katz Media Group, however, the opposite is true for best drama or comedy nominees for the upcoming 69th Emmy Awards. Nearly all of the series have been watched by fewer than half of all potential viewers, while more than half of the respondents hadn’t heard of more than 50% of the shows.

In a survey of 500 adults, Katz discovered the most-watched and recognized Emmy nominees air on broadcast TV, while cable and streaming shows were barely able to compete. The most popular nominee by far was ABC’s Modern Family, which had seen by 56% of respondents, followed by NBC’s This Is Us at 35%, and ABC’s Black-ish at 28%.

(Read: Emmys 2017 Predictions: Who Should Win, Who Will Win)

The most-watched streaming or cable nominee was Netflix’s Stranger Things at 21%. Netflix’s Master of None, Hulu’s The Handmaid’s Tale, and FX’s Atlanta tied at 5% each for the least-watched series. Master of None also drew the dubious distinction of receiving the most “never heard of” responses at 76%.

While some might blame cord-cutting for the survey’s results, the executive VP of strategy and analytics for Katz Media Group would argue part of the problem is unsuccessful marketing. “The main takeaway here is that we’re seeing fewer and fewer broadcast series nominated for best drama and best comedy, but the reality of it is that these other series [on cable and streaming] are very well-received and critically acclaimed, but there’s no critical mass behind them,” Stacy Schulman explained. “People are still having a hard time finding them. Many viewers don’t even know that they exist.”

View the full results of Katz’s survey below (via Variety). 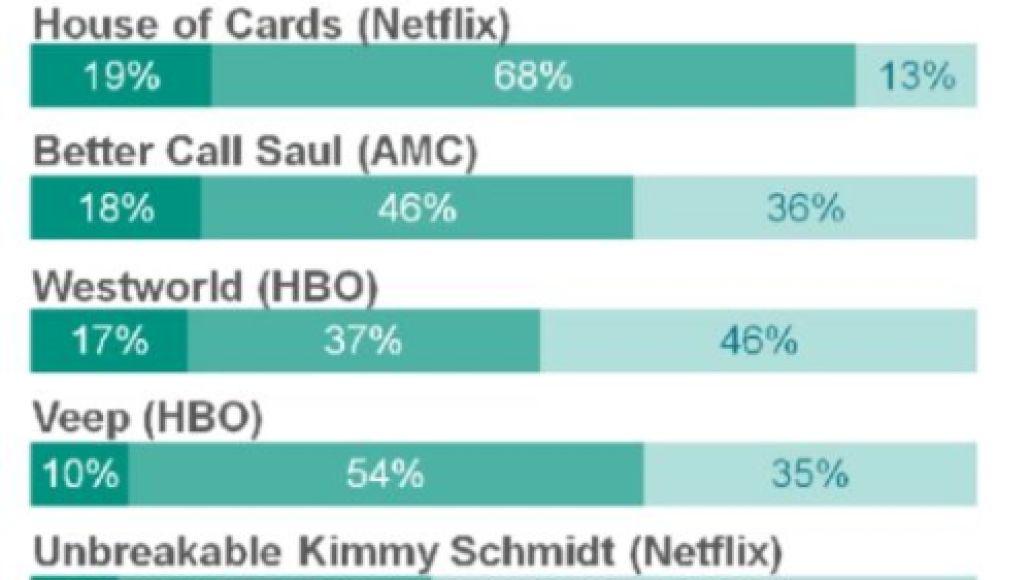 Barely anyone watches Emmy-nominated shows, according to survey