The American Horror Story franchise has honed in on something far more terrifying than witches, spooky hotels, and freak shows for its latest season: AHS: Cult, which debuts on FX September 5th. This time around Ryan Murphy and Brad Falchuk, co-creators of the show, push the real-life horror of our current political climate into the spotlight, using the grim reality of Trump’s 2016 election as a jumping-off point for murderous unraveling. What makes this work so well, and amount to the second best (sorry, nothing will ever beat Coven) installment of AHS, is the genius way it mixes “too soon?” and “scary because it’s true?” meme tactics. The meta scare factor of a horror genre show heavily based on the President of the United States, and the fact that seeing scenes based on current affairs is more rattling here than even the best Manson documentary, really says something.

Most of us have been afraid for a few months now that the world is undeniably fucked, and AHS: Cult confirms that fear by making an entire show to mirror that fact. It’s scary on screen and even more so seeing similar things play out on the daily news. When your own reality is grim enough to be made into television, you know you’re up shit creek. Our President is so terrible that a show known for being one of the bloodiest and “goes there” to have ever been made is using him as its main subject. Just think about that for a minute. That’s yuge. It’s like if someone remade The Exorcist and cast a Ronald Reagan look-a-like to play Regan. There’s no difference between politics and horror right now, and that’s truly the stuff of nightmares. 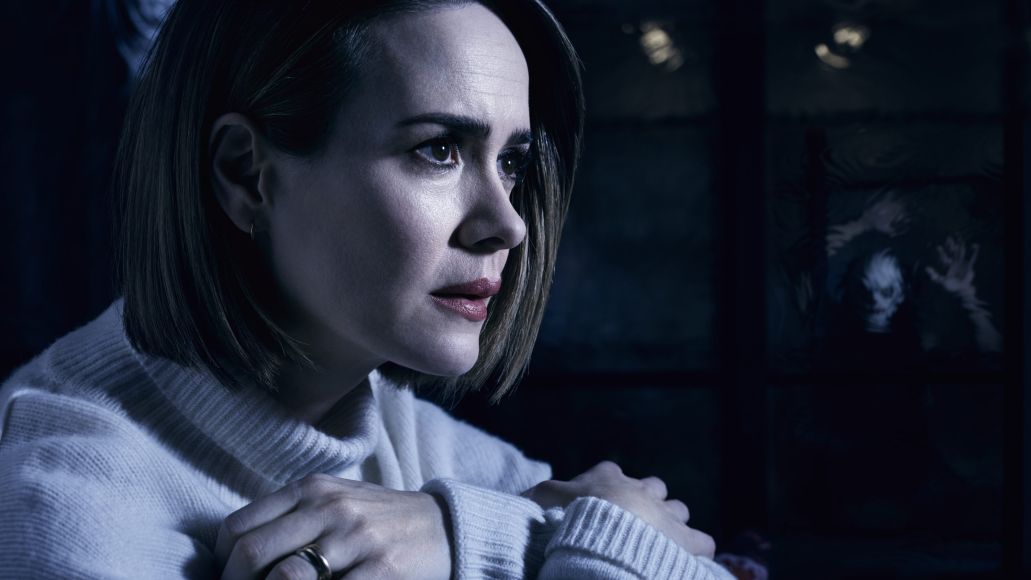 Set in Michigan, the show lets us know right away that there will be not even the slightest attempt to veil what the sweeping theme is here. Lowlights of Hillary Clinton and Donald Trump’s equally hoarse/jaw-clenching campaign trail appearances lead in to the Richards, a married lesbian couple (Sarah Paulson and Alison Pill), shrieking in terror when the newscast they’re glued to announces that Trump won the election. Nearby Kai Anderson (Evan Peters), a young man whose main goal is to see the world set itself on fire, is thrilled with the results. Looking more like Sassy magazine-era Kurt Cobain than any cult leader we’ve seen so far in history, he humps the TV screen and then blends up Cheetos to make an at-home Trump facial for himself. We’re shown by his actions, and his long-winded mansplaining monologues, that Kai is looking to recruit people whose fears infringe upon their quality of life and then teach them how to use those fears as weapons.

Preying upon Ally Mayfair-Richards’ (Paulson) fear of, well, just about everything — clowns, blood, confined spaces, open spaces, sea corral — she’s pushed by Kai’s cult of personality towards putting on the required spokesperson costume for just one of many roles highlighted in the Fox News-y media as being “most” up-in-arms over Trump. “I don’t want you to not be married anymore,” their child, Oz, says when his two moms clutch each other in fear after hearing that Trump is their new president. The election results quickly become a blunt tool put to work in tearing apart their family union, and Ally doesn’t help matters much by being very vocal in her belief that clowns are terrorizing her (they are, but for awhile she’s the only one to see them), buying a gun, and using that gun to accidentally shoot a person of color who, unbeknownst to her, is at her front door to make a delivery for her wife. 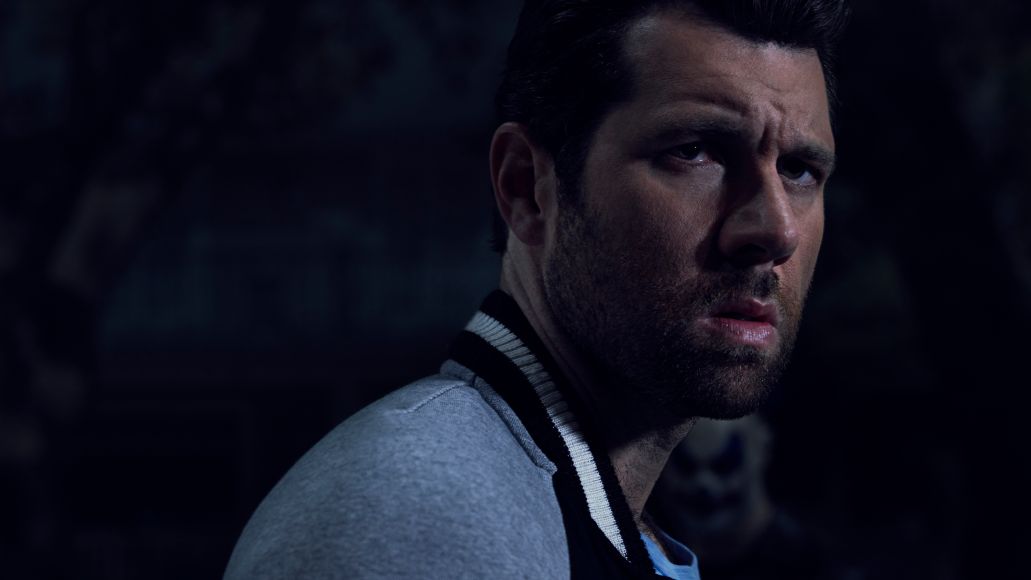 People of color, who Republican-leaning news agencies will often paint into the “delicate and hysterical” box shared by women, immigrants, and the LGBT community, are depicted in AHS:Cult as being fed-up to the point of violent rage, or complete mental breakdowns, and rightfully so. Field Reporter Beverly Hope (Adina Porter) gets passed over for meaty assignments in favor of an ambitious younger reporter (played by Emma Roberts) who uses both her sexuality, and her race, to get ahead. With a little influential push from Kai, Beverly’s anger bursts in an on-camera attack against a douche bag Trump supporter who un-wisely inserts one “grab her by the pussy” joke too many into her field reports. Further adding to the vignettes of boiling rage, and inserting a little clever camera wink, is Chaz Bono (trans son of Cher) who appears as a Trump supporter so frothed up to vote him in that he cuts off his own hand in order to be able to make it to the polls before they close.

Aside from the on-the-nose subject matter, what’s unique to AHS:Cult is its ability to work in humor more than any of the previous seasons. This may, in part, seem so front and center now that we’ve gone without Jessica Lange as a cast member for two seasons. She left the franchise with Freak Show in 2015 and hasn’t expressed any plans to return. While Lange’s humor was subtle, side of the mouth, and pure honey-glazed glass shards, Billie Lourd comes equipped with that certain Tweetable humor that is irresistible and scene stealing, but for entirely different reasons. Lange’s humor was pure “oh snap,” and Lourd’s humor is, “Can I share this Jezebel article with you?” Both great. New to AHS but a veteran of Murphy’s more lighthearted horror show, Scream Queens, Lourd is a fantastic addition to the AHS world. Playing a babysitter by way of cult involvement named Winter, she rattles off the most quotable moments of the first four episodes with lines about how her greatest achievement is being retweeted by Lena Dunham (who makes a cameo this year and, probably, gets killed real bad) and how her most humiliating moment was when a classmate found a love letter she’d written to Paula Abdul and made copies for everyone. 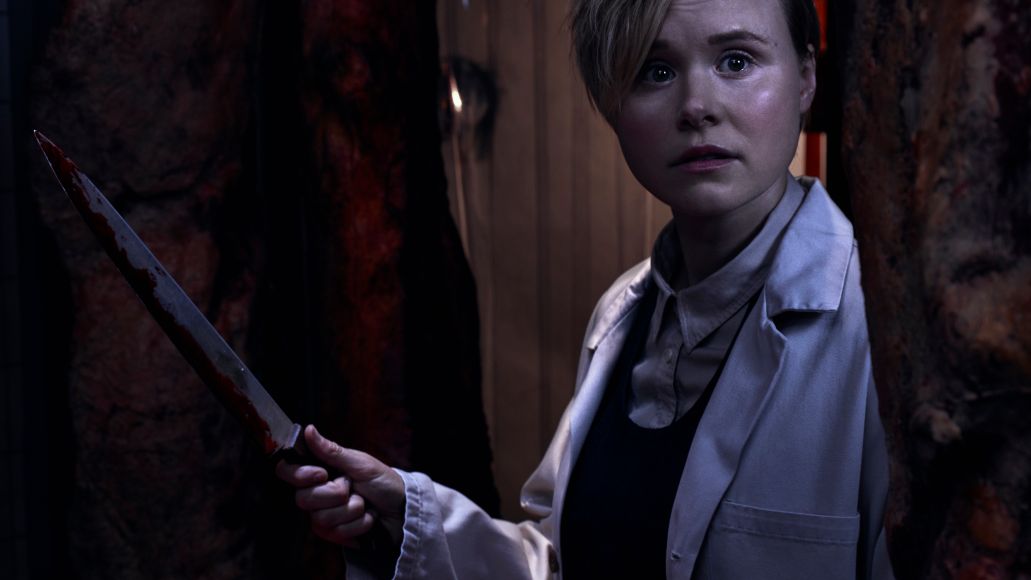 Just as Buffy the Vampire Slayer was a treat for young women who wished they were born knowing karate and could run up walls to vanquish monsters. Just as the L Word was a treat for lesbians who knew the show was ridiculous, but loved it because it was the closest thing on TV to  speak to their own lives. Just as Insecure is a treat for successful African Americans who are trying to live their lives and enjoy them under a scrutinous, unbalanced, and often hateful watchful eye — AHS: Cult is a treat for those of us who just can’t fucking believe that reality is real right now. Trump voters will hate this show. Everyone else will find occasion to laugh and scream along with it. Sometimes those two options are the only things we have.