“I believe in a family-type atmosphere, where people are free to experiment,” a boyish David Lynch says toward the end of Guy Girard’s fascinating 1989 TV documentary, Don’t Look at Me. Decades later, that belief hasn’t changed: Tinkering, thinking, prodding, and pulling at the seams all bring a smile to the auteur’s face. It’s a practice that’s informed his work since the very beginning; the idea of searching, of finding something, and walking away with a new perspective. But you have to remember, that perspective belongs to you, and no one else, and that’s a vital element of any search, because if it were the other way, and things were black or white, well then life would get very dull very fast.

That sense of experimentation is something that’s been sorely missing from music festivals across the board, which is why Lynch’s Festival of Disruption is such an exciting prospect for the festival industry. It’s an experience that says as much about the mind of the curator as it says about the world at large. Reason being, society is constantly starving for some form of discovery, the problem is that it’s often spoon-fed these revelations, namely through technological means. But as Lynch told everyone on Sunday afternoon during his talk, “New technology are just beautiful things to make life better for us,” and that’s why it’s up to us to keep finding new challenges over leaning upon the niceties. 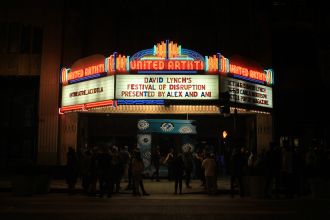 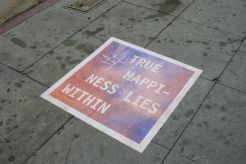 With the Festival of Disruption, Lynch wants everyone to walk away with something, to ask questions long after they’ve left, to feel like they’ve been involved with an event that has a meaning — a purpose. That’s the conceit behind his two-day soiree, which has now taken over the Ace Hotel and Theater in Downtown Los Angeles for two consecutive Octobers. Granted, much of that purpose involves his Foundation and their inspiring, charitable efforts to bring Transcendental Meditation across the world, from living rooms to school yards to Capitol Hill, but as with anything Lynch does, there are multiple layers to parse through, and this year’s festivities were no exception.

Once again, the festival offered signature musical performances, star-studded conversations, left-of-the-dial screenings, Lynch-related clips, and a number of exciting activations. This time around, though, they upgraded the amenities, adding an ideal food truck area, which came fully stocked with an eclectic roundup of offerings (from Yeastie Boys’ inventive Cooper bagel sandwiches to Pico House’s healthy grain bowls), and a more intuitive collection of galleries. Those looking for a tranquil reprieve could now take in reflective works by William Eggleston, Brian Eno, and Lynch himself at the Ace as opposed to down the street. A minor touch, sure, but a wise move nonetheless that allowed for a stronger unified vision, seeing how the hotel, with its industrial tapestries and Parisian-style restaurant, looks like something straight out of Lynch’s mind. 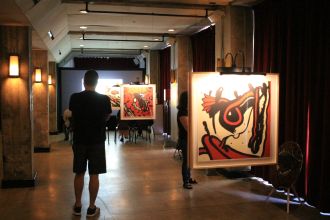 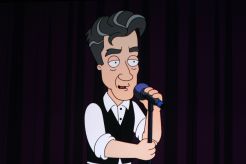 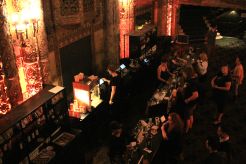 The only time anyone had to venture outside the Ace was across the street at the Bold gallery, where Polaroid resurrected the infamous Red Room for a once-in-a-lifetime photo opportunity. With the exception of the R&R Diner, the Red Room is the most iconic set from Twin Peaks, which is why this activation proved to be such a win-win for the fans — and they really went the extra mile. Not only did they rebuild the famed location, but they also used the same props from the show, which meant that everyone got to sit on the same two chairs as Sheryl Lee, Kyle MacLachlan, Laura Dern, Ray Wise, and the list goes on. Coming face to face with on-screen magic is always a joy for fans, but interacting with that magic is a rarity unto itself, and the combination of the two proved to be far more integral than anything the pop-up shop was selling.

In some respects, the Red Room also fell in line with one of the themes being discussed at the festival, particularly that of anti-mimesis, or rather the philosophy that life imitates art. Two of the films screened — Thom Andersen’s 2003 video essay Los Angeles Plays Itself and the aforementioned Don’t Look at Me — comment on this marriage in subtle and not-so-subtle gestures. Andersen’s nearly three-hour breakdown condemns Hollywood filmmaking for marginalizing an entire city, while Girard’s fly-on-the-wall documentary uses footage of Blue Velvet, The Elephant Man, and Eraserhead in an attempt to crack into the inner psyche of our noted auteur. Not everyone was on the same page, as artist Ed Ruscha, when pressed by host Kristine McKenna on his thoughts about the arguments being made in Andersen’s film, shrugged it off, saying: “Movies are movies.” 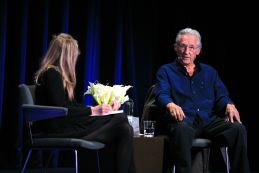 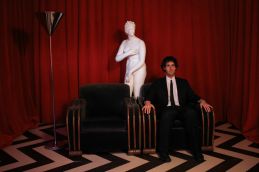 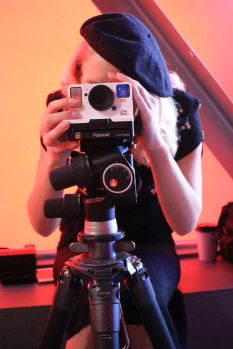 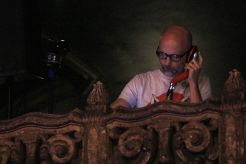 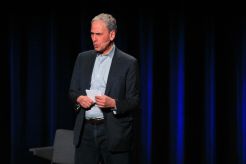 Maybe, maybe not, it doesn’t really matter. The fact that anyone’s even having that debate — at a music festival, no less — only proves how removed Festival of Disruption is from the homogenized fluff that turned the industry stale long ago. “Something got created here this weekend,” said Bob Roth, CEO of the David Lynch Foundation, on Sunday night. “This is what life is — differences and epiphanies.” That’s not to say everyone was sitting around like a bunch of pretentious scholars, tapping pencils on their chins like they were in a graduate course. No, not at all; in fact, those who did the whole enchilada, as Gordon Cole would probably say, woke up at dawn and partied until dawn, thanks to the swanky DJ sets that kept the festivities going late into the night atop the Ace. These ranged from Dean Hurley to Yacht to a last-minute addition like Flying Lotus.

It’s just further evidence that people of all different callings — and not just those who spent every Sunday night this past summer categorizing notes on the number “315” and names like “Richard” or “Linda” — want something more from a festival. They want to explore, they want to discover, they want to grapple with something they may or may not already understand. The good news is that they will, according to Roth, who announced that the Foundation has plans to expand the festival into more markets. Soon enough, there’ll be a whole lotta shakin’ going on in New York, and possibly Nashville, and maybe, if things really go to plan, in South America. Until then, Lynch will focus on one experiment at a time, but he’ll never stop dreaming — and neither should we.

Click ahead for the 10 best moments from this year’s Festival of Disruption.