Springsteen on Broadway isn’t an evening of brisk, cheerful anecdotes interspersed with lively versions of your favorite songs. Instead, it offers a sequence of interconnected vignettes that Bruce Springsteen has chosen to represent the story of his life as an artist, which provides a clear dramatic arc. Over the course of 135 minutes, Springsteen regaled the audience about growing up (literally), his father’s tragedy and his mother’s optimism, and his unabashed adoration of rock and roll and the E Street Band. He’d explain how he fell in love with the American West, offer a prayer, and entreat the audience to confirm what he believed was his calling and his mission.

For those accustomed to Springsteen’s traditional three-hour stadium blowouts, where spontaneity rules and every gesture is larger than life, this performance is the polar opposite. The show is tightly scripted, and there is no room for boisterous crowd participation, but that’s not a negative. There is a very precise and definite rhythm that carries from piece to piece, creating an emotional intensity that is not unfamiliar and at times profoundly moving, especially in such close quarters. (Bring tissues; you will need them.) It is formal but informal at the same time, Bruce wearing a simple black t-shirt and black jeans, with minimal stage props in the form of equipment cases and some very basic yet effective lighting. The sound quality was fantastic in the orchestra, and hopefully at these prices that was also the case in the cheaper seats. 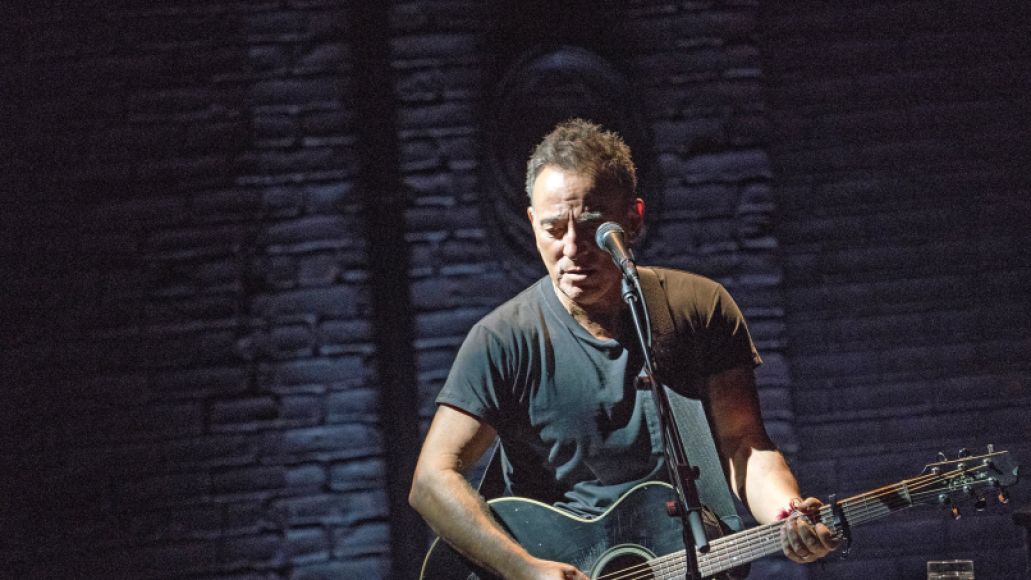 The theater is small enough that Springsteen can move off mic while speaking or singing and still be audible; hearing Bruce Springsteen talking without aid of amplification, or standing at the very edge of the stage singing, for example, the last verse of “The Promised Land” or the penultimate verse of “Thunder Road” with absolutely nothing between him and the audience is a heart-stopping moment that even the most die-hard Boss fan has rarely if ever experienced. It felt like these moments were a gesture of breaking down the fourth wall, the same way Springsteen’s recent forays of crowd-surfing literally brought him in touch with the crowd. These moments more than any other silenced those who were prepared to be boisterous and rendered the entire audience drop-dead silent.

That might sound awful to many, and fair enough (and there are more than sufficient opportunities to share the love), but this is a different manifestation of Bruce Springsteen, pared all the way down to the bones. It is not afraid to tell the hard truths; it is genuine; it is self-deprecating; and it is full of love and appreciation. For example, Springsteen declared, “I have never held an honest job in my entire life! I’ve never done an honest day’s work! I have never done any hard labor! I have never worked 9 to 5! And yet, it is all I have written about!  I’ve become wildly and absurdly successful writing about something of which I have absolutely no practical experience doing … thank you all very much.”

As he does in his memoir, Springsteen testified to the power of Elvis Presley on his eight-year-old self: “A holy beam! A sanctified light! A big train blew in from Memphis and suddenly a new world existed … We, the unwashed, the invisible, the kids would want MORE.” If you have read Born to Run, or followed Springsteen’s career with any level of attention, the stories will not necessarily be new, but experiencing their presentation in a live setting from the actual Boss’ mouth is a definite thrill.

Throughout the evening, Springsteen moved between the acoustic guitar and the piano, and not unsurprisingly, there were no deep cuts in the 15-song setlist. For those familiar with any of his previous acoustic deconstructions of songs like “Born in the USA”, “The Rising”, or even “Dancing in the Dark”, these versions won’t be unfamiliar, but both “Born in the USA” and “The Rising” felt deeper and darker than they’d previously ventured; introducing the former, Bruce told the story of failing the draft exam and that he wondered who went in his place “…because someone did.” 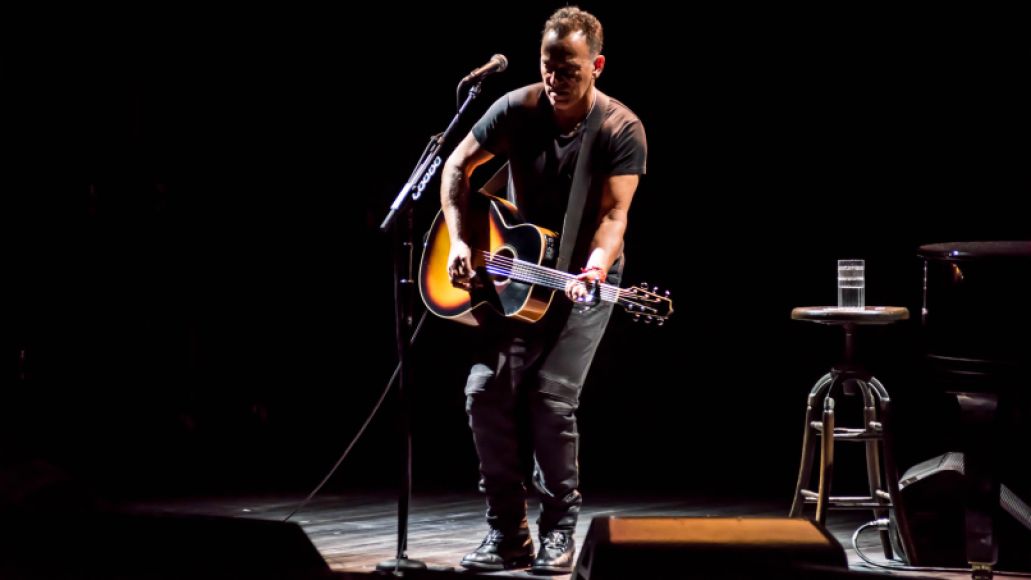 The E Street Band were all invoked by name during “Tenth Avenue Freeze-Out”, which is, of course, the story about the band, as Springsteen has declared for years. On this number in particular, Springsteen appeared to relish his competency on piano, allowing himself more verve and room than he usually indulges when Roy Bittan is available. But after giving everyone their due, Springsteen would continue to vamp on the the main riff of the song, retelling the legend of the Big Man, Clarence Clemons, and what it meant to Bruce and to the audience: “Clarence was a figure out of a rock and roll storybook. And together we told a story bigger than any of the ones that I’ve written. A story where not only did Scooter and the Big Man bust the city in half, but we remade the city, shaping it to the kind of place where our friendship would not be such a strange thing.” With that, he swung back into “Tenth Avenue”, the verse about the Big Man joining the band, pausing to let the audience cheer, and cheer, and cheer some more, like he did on the 2012 tour after Clemons’ death in 2011.

“She is the queen of my heart!” Springsteen extolled, announcing the unexpected arrival of Patti Scialfa on the stage. Her presence was a delightful and welcome addition to the evening and enhanced the story Bruce is presenting. The two performed their usual onstage outings of “Tougher Than the Rest” and “Brilliant Disguise” with an unabashed affection that was lovely to witness, down to the “Love you, babe,” he whispered in her ear as she left the stage.

Bruce allowed himself a brief but abstract commentary on contemporary politics, noting that “People don’t come to my shows to be told what to do … I suppose if that was true, we wouldn’t be in the fuckin’ mess we’re in!” He invoked the Nazi march in Charlottesville and quoted Martin Luther King’s “The arc of the moral universe is long, but it bends towards justice,” before performing the criminally underrated “Long Walk Home” from 2007’s Magic album and then moving straight into “The Rising”, which needed no context.

It was clear we were in the home stretch when Springsteen stepped to the center of the stage and offered this summary of his intent: “I fought my whole life, I studied, I played, I worked, because I wanted to hear, and I wanted to know the whole American story. My story, your story, I wanted to understand as much of it as I could. In order to celebrate its beauty, its power, to be able to tell it well to my friends, to my children, and to you. This was my young promise to myself; this was my young promise to you; and this is what I pursued as my service, all of these years, this is what I’ve presented to you as my long and noisy prayer, and as my magic trick. I hope that I’ve done that and that I’ve been a good traveling companion.” One had to wonder how it was possible that he didn’t already know the answer to that question, but that would connect to the opening salvo of the night, where Springsteen described the elements that it took to come onstage and perform in front of 80,000 people, including “a furious fire in the hole that for some reason don’t quit burning.” 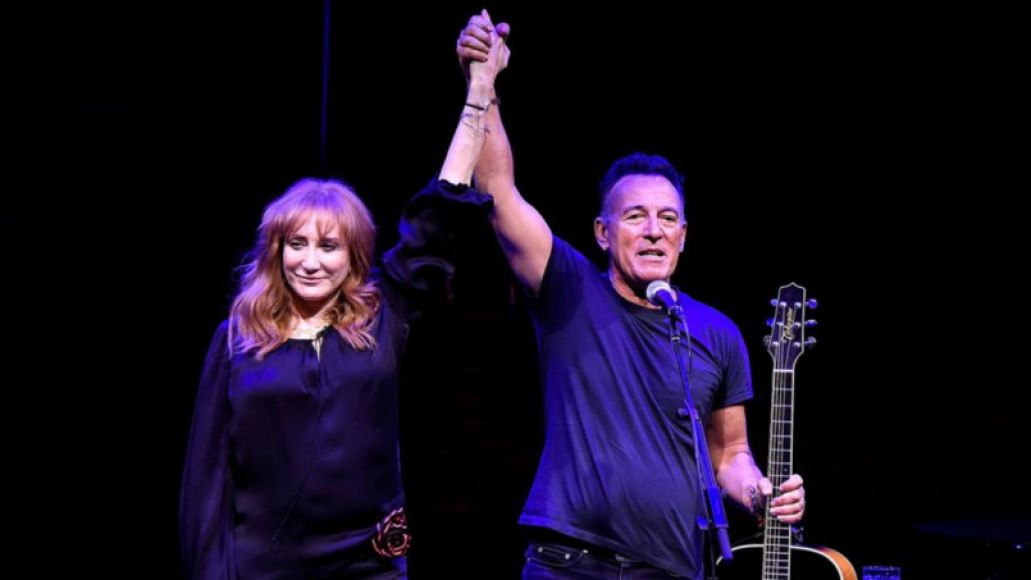 The last numbers included lively versions of “Dancing in the Dark” and “Land of Hope and Dreams” before an invocation of the Lord’s Prayer, offered as a benediction to a tree that was a companion in Springsteen’s childhood, but that he discovered was no longer there on a recent visit back to Freehold. The final song, the only one it could possibly be, was an emphatic, bare-bones “Born to Run”, Springsteen knocking on the body of the guitar in the rhythm of a heartbeat to bring the song, and the evening, to an end.

The production was intense and powerful and a more than credible summation of the life and career of one of our greatest American performers and songwriters. It was an unflinching attempt at an honest recounting of his story as Bruce Springsteen understands it. It is reasonable to experience this performance and feel like it is both a declaration and some kind of conclusion, and to be grateful for one and endlessly sad about the other. It is definitely nothing any rock musician of Springsteen’s caliber has ever attempted (more’s the pity) and likely nothing that anyone will be able to execute with the precision and depth that Bruce Springsteen has manifested with this production. See it if you can; find a tape if you can’t. (Hopefully Springsteen’s own live Archive series will serve one of these up later.)