Okay, so last week’s episode, Franchise Prequel, basically amounted to a commercial for – more kindly, a buildup to – this week’s release of the video game South Park: The Fractured but Whole. Professor Chaos was defeated, Vladimir Putin got sternly admonished and grounded by Mr. Stotch, and, in conjunction with the game’s basic premise (see the trailer below), some of the boys defected from Coon and Friends to form the rival Freedom Pals. In fairness, while it mostly flopped as an episode, it did keep with Season 21’s theme of lampooning life in Giant Doucheland. And, in an episode that took several shots at exhaustive universe building, it’s fitting that Trey Parker and Matt Stone were using one medium to advertise another part of their own universe.

Admittedly, it felt good, though, to see the boys don their old superhero and supervillain costumes once more. After all, who doesn’t sleep a little better knowing Human Kite and Mosquito are out patrolling the streets at night? But it also reminded me of maybe the only thing missing from a solid first half to the season: Stan, Kyle, Cartman, and Kenny. Sure, we’ve seen Cartman backslide to his old, horrible self (where girls are neither smart nor funny) and the boys did kidnap the school scheduler in order to preserve a treasured, if non-PC, vacation day and prevent Randy’s Columbus crusade. That’s all well and good, but who couldn’t go for a classic “Stan has a problem” episode or an installment that returns to the old, tried-and-true dynamic of Cartman denigrating Jews and pissing Kyle off? Any chance an episode called “Hummels & Heroin” could be the old score we crave?

Let’s head on down to South Park and find out.

The opioid epidemic continues to ravage small towns and ruin lives across America, and South Park, Colorado, is not immune. Some of the town’s finest birthday entertainers — Swiper the fox, Peppa Pig, and even the beloved Chuck E. Cheese — have died gruesomely mid-performance (in front of small children) at parties. Chuck E. Cheese was new-kid Marcus’ hero, and the devastated young boy vows to bring the responsible parties to justice. He has precious little to go on, though. All he knows is that painkiller overdoses have been the cause of death, and all the costumed victims have turned up with rectal cavities brimming with Hummel figurines. I have a raging clue…

If Marcus was just a little older, he might remember what the “War on Drugs” taught us: that illegal drugs can usually be traced back to “people who have been thrown away by society and forgotten about.” Minorities in prison? Nope. Seniors in old folks homes? Ding-ding, bitch. When Billy, um, Stan goes to drop off some Hummels to his grandpa at the nursing home, he finds he’s no longer in Kansas anymore. But this Oz is run by top bitches, loose farts, and the only currency that matters on the “inside”: Hummel figurines. As Marcus continues to unravel the case, Stan discovers he’s been unknowingly delivering painkillers to costumed addicts all along for top bitch Mrs. McGullicutty and that his grandfather is deeply entangled in the local drug trade. Can a Cartman scheme, a barbershop quartet of prostitutes, and a bagful of Hummels clear Stan’s name and earn back Grandpa some cell block cred? 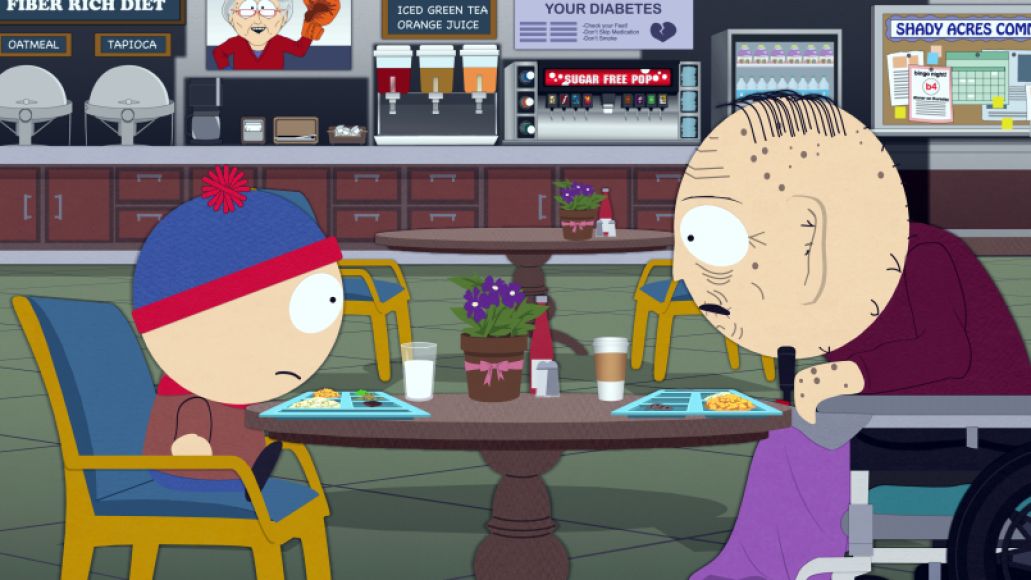 It might be well and good to point out that opioid addiction affects us all (right down to Dinky Duke) and that old people in our country are being incarcerated in record numbers and shamefully neglected in homes, but these are hardly the insights that make for a classic episode of South Park. What rescues the episode from falling into “Franchise Prequel” territory are a handful of stellar gags. It’s been ages since Butters dropped trou at a urinal rather than in protest; it’s about time somebody called out senile old lady farts for their rotten potency; and everyone loves a barbershop quartet singing old-time favorites from the ’90s like Nirvana’s “Rape Me” and Cypress Hill’s “Insane in the Brain”.

Episode MVP: Marvin Marsh aka Grandpa goes from top bunk to top bitch in the old folks home once he controls the best Hummel collection on the cell block. That’s our grandpa!

Best Moment: Butters dropping trou at a urinal, Randy Marsh nearly suffocating on loose old lady farts, and Marvin Marsh swinging for the cheap seats with a bag full of porcelain figurines — dentures and liver spots flying through the air. All moments that rival the season’s best. But nothing quite matches that old-timey barbershop quartet of prostitutes from the Protestant youth group.

The Quotable South Park: “Yes, that’s right. We are young prostitutes here to volunteer however we can.”

Song of the South Park: Is it funnier that our favorite prostitutes came dressed in full barbershop quartet regalia or that their idea of “nice old people music” includes Cypress Hill and Spin Doctors? Kudos to Killer Mike for dropping rhymes that depict old folks home as they truly are, but he can’t compete with those harmonies — at least not without El-P.

Oh, My God! They Spared Kenny: Well, you couldn’t have a barbershop quartet with only three members. That’d just be lame.

I Learned Something Today: Never count an episode out entirely. One sweet gag and a solid ending can salvage quite a lot (*blows pitch pipe).