Well, here we are. It’s been a year since the most unthinkable election in United States history delivered the presidency to businessman and racist traffic cone Donald Trump, and things are about as bad as 65.8 million of us expected: America is an environmental laughingstock, healthcare as a concept is on the verge of just not existing, and a cadre of union-busters, racists, and actual Nazis proudly profess the desire to make life worse for anyone who isn’t a rich, straight, white dude. Oh, and we’re closer to nuclear war than we’ve been since that terrifying Genesis video was in rotation on MTV.

As an idiot music critic, I don’t have the answers needed to address those very real problems. However, I do possess the skills to deal with this fake one: all of the great moments in American multimedia ruined by Donald Trump’s presence in them. Therefore, as we process the past year and get ready for more fights to come, consider this both a guide to avoiding the pumpkin menace in your downtime and an elegy for all of the otherwise great songs, shows, and comics that have been forever tainted by the presence of this bloated, orange dipshit.

A quick note on curation: this article isn’t exhaustive, so stay vigilant (looking at you, Zoolander fans). Also, for the purposes of this article, I’m not counting things like Saturday Night Live or The President Show (because everybody knows what to expect from those) or The Apprentice (because you can’t ruin something that was already that shitty to begin with).

To quote Kevin McAllister himself: woof. This is the big one. Even though it’s has been a holiday staple in my house for a quarter of a century, and even though that Daniel Stern electrocution scene is still pretty dope, Home Alone 2 lost some of its shine last year thanks to a Plaza lobby appearance by the hotel’s then-owner: Donald Trump. I can’t fault the filmmakers: according to Matt Damon, Trump often traded permission to film in one of his buildings for mandatory cameos in the movies themselves. Plus, they needed an easily recognized signifier of bloated New York opulence, and what better subject than a real estate magnate whose hair was spun by Rumpelstiltskin himself? Still, though, I’m not sure I’ll ever be able to look at a Talkboy the same way again. (Also, fun fact: less than a month after the movie came out, Trump had already put the hotel into bankruptcy).
_________________________________________________________

18% of All Wrestlemanias (and the Stone Cold Stunner)

I still have a nearly worn-out VHS copy of Wrestlemania IV, in which “Macho Man” Randy Savage mustered the last of his strength to deliver a flying elbow drop to “The Million Dollar Man,” Ted Dibiase, win the night’s big tournament, and claim his first WWF World Heavyweight Championship in the process. That taped-from-the-TV pay-per-view might be the most-played piece of media from my childhood, but even Macho Man’s triumph is now forever tainted by the fact that the event was, repeatedly and enthusiastically, reported as emanating from the Trump Plaza Hotel and Casino in Atlantic City (even though it actually took place at the nearby Convention Hall). Trump’s enthusiasm for wrestling didn’t end there (nor did his belief in the power of kayfabe). While he went on to host or appear at Wrestlemania V, VII, XX, and 29, the nadir of his involvement with WWE (and, perhaps, the sport itself) came at Wrestlemania 23; during the event’s “Battle of the Billionaires,” Trump ambushed rival Vince McMahon with some of the least convincing punches of all time before shaving McMahon’s head, pretending to drink a beer, and taking one of the limpest, dog-shittingest Stone Cold Stunners ever recorded. Ten years later, Trump is the actual president of the United States, and McMahon’s wife, Linda, runs the federal government’s Small Business Administration. Both of these men have more money than you could count in two weeks. None of this is real.
_________________________________________________________

Though they wrote two of the most incisive political comic strips of the 1980s, rival cartoonists (and Pulitzer winners) Garry Trudeau and Berkeley Breathed took radically different approached to get their points across. Trudeau’s “Doonesbury” channeled the weariness and wariness of Vietnam and Watergate into dry, urbane take-downs of the decade’s power players, while Breathed’s “Bloom County” injected a madcap cartoon energy into story lines designed to reveal the inherent inanities of American politics. Though their approaches differed, they shared a frequent target of derision: Donald Trump. Whether it was Trudeau having Trump commission a Sistine Chapel-style self-portrait above the toilet of his golden yacht or Breathed inserting the billionaire’s brain into the body of monosyllabic freakazoid Bill the Cat, these guys sent up warning flares about Trump’s ambitions way before it became the fashionable thing to do. That’s what makes those old strips so hard to read now; they aren’t so much ruined by Trump’s presence as they are sad reminders that we had, like, 30 years to stop him.
_________________________________________________________

The Plaza wasn’t the only Trump property to hit bankruptcy in the early ’90s; most of his Atlantic City casinos were underwater, too, meaning that his personal debt ballooned to something like $900 million early in the decade. When he wasn’t busy fleecing the city of Gary, IN, out of public money for yet another shifty casino development, Trump spent the mid-’90s doing what any failed-but-famous businessman would do: making cameo appearances on a whole bunch of sitcoms you used to like. Here he is making Carlton faint with avaricious glee on The Fresh Prince of Bel-Air! Oh look, now he’s playing poker with Judd Nelson and John McEnroe on Suddenly Susan! Does he get ogled by Kim Cattrall on an episode of Sex and the City or called a “handsome zillionaire” by Fran Drescher on The Nanny? You fucking bet he does. Even poor Michael J. Fox has to shill for The Art of the Deal on Spin City. Michael J. Fox doesn’t deserve that, and neither do the unsuspecting Netflix viewers that happen upon these cameos now.
_________________________________________________________ 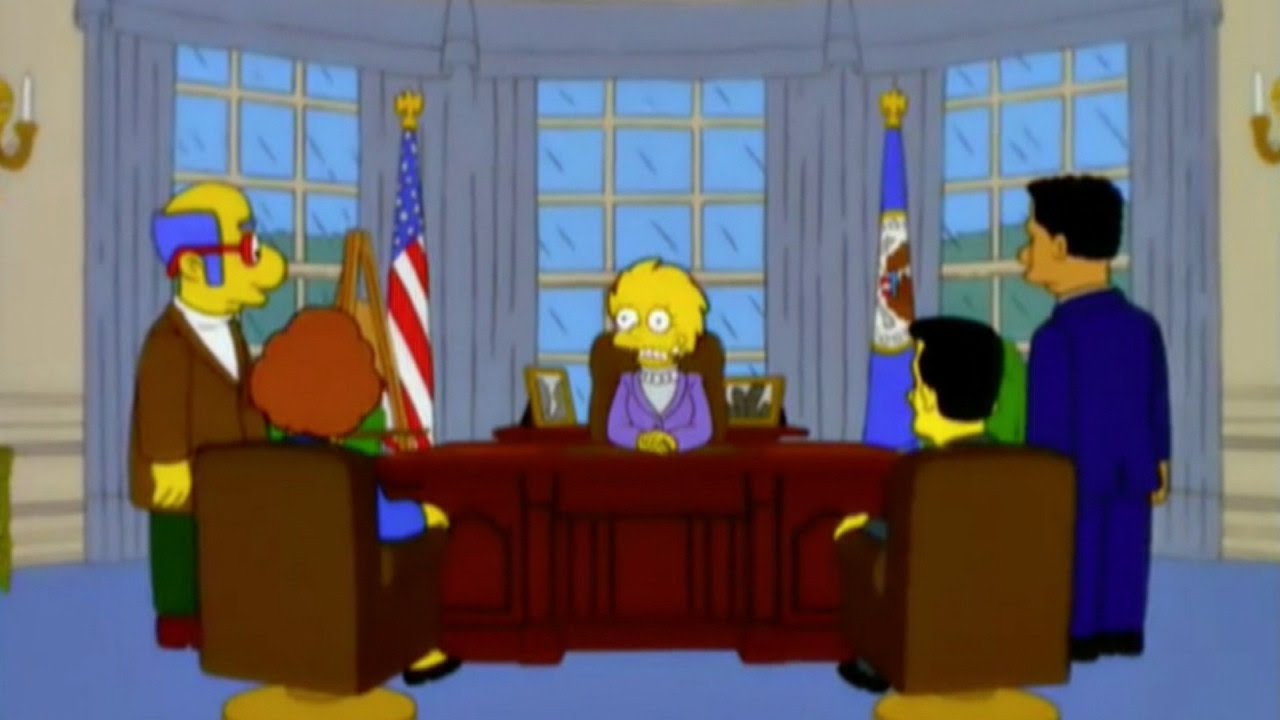 Of course, 2016 wasn’t Donald Trump’s first run for the presidency. Trump was briefly a Reform Party candidate in the 2000 election, a candidacy that was greeted with snorting (and, apparently, short-sighted) derision at the time. As the thought of Donald Trump as the president was laughable at the time, it quickly became fodder for the writers of The Simpsons. When constructing the Lisa Simpson presidency’s dark future timeline for the 2000 episode “Bart to the Future”, Dan Greaney and his fellow members of the writers room imagined the worst direction that American politics could possibly take and came up with the answer “President Trump.” In a 2016 interview with the Hollywood Reporter, Greaney elaborated, calling the line about Trump “a warning to America” and “the logical last stop before hitting bottom [that] was pitched because it was consistent with the vision of America going insane.” Welp. Congratulations on the prescience, I guess. Maybe say it louder next time.
_________________________________________________________

Archival Footage of the USFL 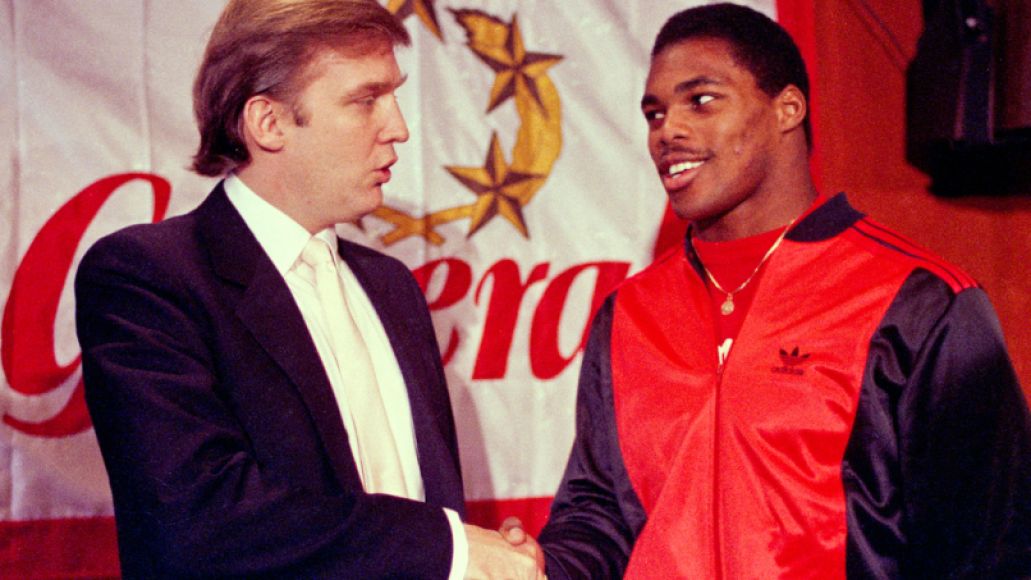 Let’s be real: the USFL was probably destined to fail without the involvement of New Jersey Generals owner Donald Trump. However, that pernicious huckster did all he could to hasten the demise of the fledgling spring football league in order to make himself a few extra dollars. After a successful debut season in 1983, Trump came in and immediately upended things; while Herschel Walker was tearing it up on the field, Trump joined Los Angeles Express owner and fellow plutocrat J. William Oldenburg in a spending arms race in direct opposition of the league’s recommended salary cap. As his fellow owner overspent, Trump also spearheaded the league’s ill-fated attempt to move to a fall schedule in hopes of forcing a showdown with the NFL. Trump was convinced that the NFL would blink first, trigger a merger, and admit some USFL teams into its ranks. Instead, the NFL held fast, fans abandoned the newer teams when forced to choose, and the USFL’s antitrust lawsuit netted it a settlement of a whopping $3. Just three years after Trump arrived, the entire league was no more. Again, this failure probably isn’t his alone, but he certainly made things worse. Now, if you’ll excuse me, I’m going to go cry into the sleeve of my vintage Chicago Blitz jersey.
_________________________________________________________

The Music Video for Bobby Brown’s “On Our Own”

The cameo-filled video for Ray Parker Jr.’s “Ghostbusters” succeeded by bringing in loads of famous faces who were amped about busting ghosts (Chevy Chase! George Wendt! Carly Simon!), so five years later, the team behind Bobby Brown’s “On Our Own” decided to see if the supernatural lightning could strike twice. In almost every way, they succeeded; the video removes the action from Parker’s neon sex apartment and puts it on the streets of New York, turning the city into a character just like the films themselves. The cameos are mostly cool, too (I’m especially partial to the tuba-playing Ramones), except for one: sour-pussed Donald Trump, who comes grumping out of Trump Tower like a guy who just called the cops on a busker who almost touched his Jaguar. While this video is forever ruined by his tangerine stink eye, I’m choosing to take a little solace where I can. In this dark timeline in which a cameo in a Ghostbusters-themed music video might mean a future shot at the presidency, remember: Al Franken was in the first one.
_________________________________________________________ 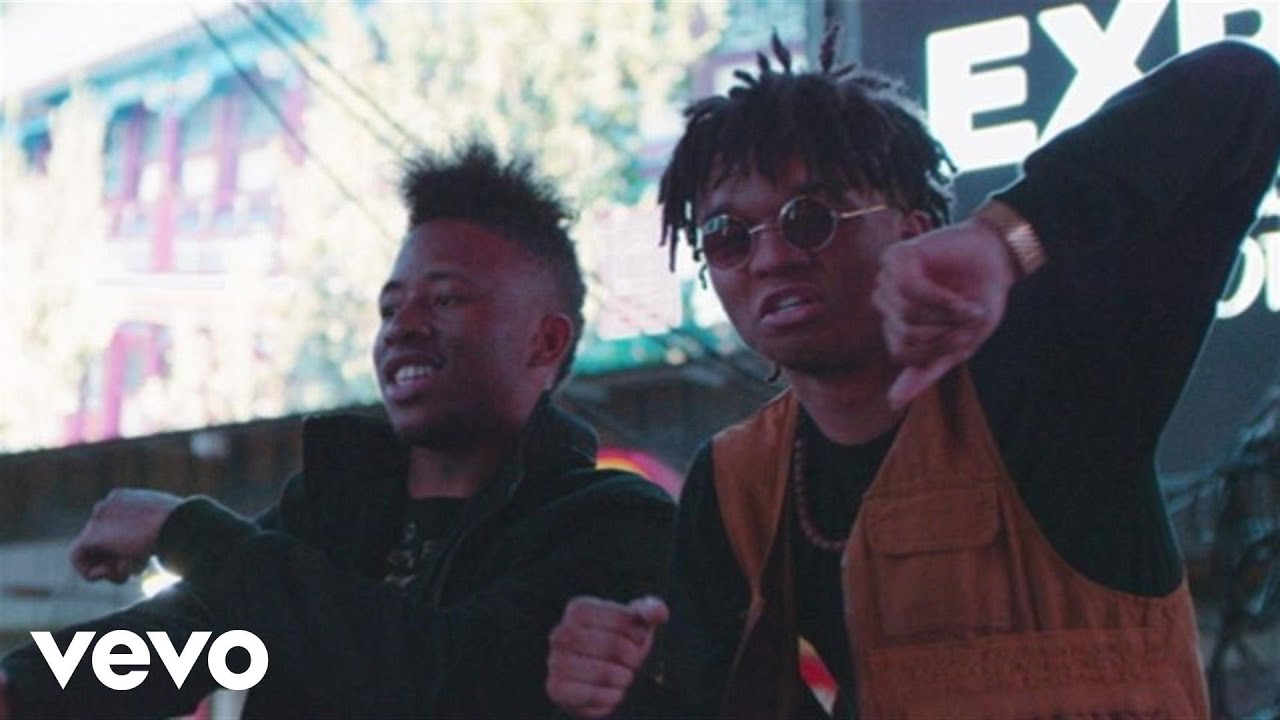 Chances are, lurking in the catalog of your favorite hip-hop act, there’s probably a shout-out to Donald “Very Fine People on Both Sides” Trump. Seriously, go take a listen: from UGK and Jay-Z to Mos Def and A Tribe Called Quest to Lil Wayne and Kanye West, MCs from across hip-hop’s history and subgenres have used Trump’s name as a recognizable signifier of ostentatious financial success for more than 25 years. In fact, the trend just peaked early in 2015, when Rae Sremmurd’s “Up Like Trump” distilled a quarter-century of these references into an aspirational ode to the man who once ran a vitamin supplement pyramid scheme. The hip-hop world’s view of Trump did a pretty complete 180 over the course of the campaign (Swae Lee and Slim Jxmmi eventually denounced Trump’s presidential run and voted for Bernie Sanders in the primaries), but these tracks are still out there, waiting to ambush your unsuspecting turntables when you least expect them.
_________________________________________________________

Ok, nobody freak out — the actual Donald Trump has never appeared on Sesame Street. However, the grandaddy of all educational kid’s shows has used Trump’s signature characteristics as object lessons in how not to behave. Trump was first parodied in 1988 as a Muppet named Ronald Grump, a rival Grouch whose slumlord greed and selfishness surface after he accepts Oscar as a tenant in his newly constructed Grump Tower (which, in a great sight gag, is just a big stack of garbage cans). Grump and Grump Tower return in more sinister form in 1994’s Sesame Street All-Star 25th Birthday: Stars and Street Forever!; this time played with sneering glee by a bewigged Joe Pesci, Grump returns with a plan to level Sesame Street in order to build a bigger, even more perversely opulent version of his massive skyscraper. The show returned to Grump a third time in 2005, then using an Apprentice-style competition among the Grouches to teach kids that being helpful and being in charge don’t have to be mutually exclusive. No wonder the real Trump wanted to defund PBS.
_________________________________________________________

Yes, Donald Trump Has Ruined Even More Pop Culture Than You Think