The opening weekend box office for Justice League already pointed to some disappointing returns for Warner Bros., but it may be worse than we thought. Former studio executive and current producer, financial consultant, and Forbes contributor Rob Cain crunched some projected numbers for the latest DC Films flop, and it looks like the film could lose $50 to $100 million dollars at the end of the day.

Cain began with the generally accepted $300 million in production costs and an estimated $150 million in marketing WB spent on the flagship DC Extended Universe feature. He then added in an additional $150 million for things like global home entertainment costs, guild residuals, interest expenses, and talent participation fees. That brings the total cost for production, release, and marketing of the film from conception to home release at an estimated $600 million.

(Read: Why Justice League Is the End of the DC Extended Universe as We Know It)

Since Justice League is only in its first week of release, projecting its future box office take is an exercise of mathematical estimation. Assuming it hits the 2.45 median multiplier of past DCEU releases, we can assume it will make about $235 million given its pathetic $96 million opening weekend gross. If it does as well overseas as Batman v Superman did, it should make 2.15 times its $185 international gross thus far to bring in about $400 million for a total worldwide theatrical gross of $635 million. For perspective, Thor: Ragnarok is up to $739.2 million almost three weeks into its release, and even the deplorable Suicide Squad made $745.6.

Why, that looks like a $35 million profit for WB, doesn’t it? Not quite, as that $635M number doesn’t actually all go into WB’s bank account. Studios only collect a percentage of a film’s gross, with other production companies, distributors, theaters, and the like also getting a cut. Cain does some funky industry math that includes home entertainment earnings to get about $545 million net revenue for WB at the end of JL’s day. Thus, $600 million in costs minus $545 million in revenue equals a net loss of $55 million, or a sad negative 12% return on investment. (It’s worth noting, however, that this figure does not include the harder to predict merchandising revenue a film like Justice League and its connected franchises could make.) 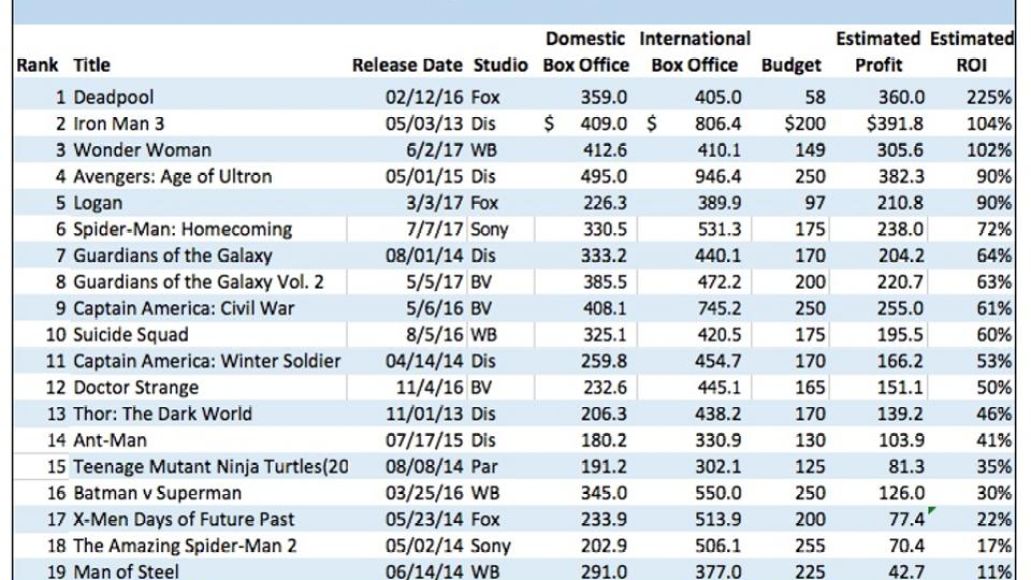 That makes Justice League out to be the single worst performer on Cain’s list of 20 recent superhero blockbusters. Even worse, the movie has the highest budget of any film on the list. In fact, what’s most fascinating is that of the top five films (Deadpool, Iron Man 3, Wonder Woman, Avengers: Age of Ultron, and Logan) only two had a budget over $200, while the others all cost below $150. Meanwhile, all five of the worst performers had budgets exceeding $200 million. It seems that there’s a pretty big lesson there that inflated budgets are far from necessary to earn a studio major ROI.

Again, the JL numbers are largely estimates at this point, but even if Cain is off by $100 million, it’s still a hugely disappointing investment for WB. Perhaps execs can take some comfort in the fact that the next DCEU film, Aquaman, has a reported budget of only $160 million. Three cheers for being thrifty.

Warner Bros. stands to lose between $50 and $100 million from Justice League