Yeah Yeah Yeahs returned to New York City for their first proper hometown show in over four years. Playing to a sold-out crowd at Brooklyn’s Kings Theatre, Karen O and co. celebrated their recent deluxe reissue of their landmark album, Fever to Tell.

In a recent editorial, CoS Editor-in-Chief Michael Roffman called out the “regurgitated spectacle” of a recent slew of full-record performances. With a varied set that meandered through all four of their studio albums, Yeah Yeahs Yeahs gave a satisfying solution to how their hits could honor both the past and present. 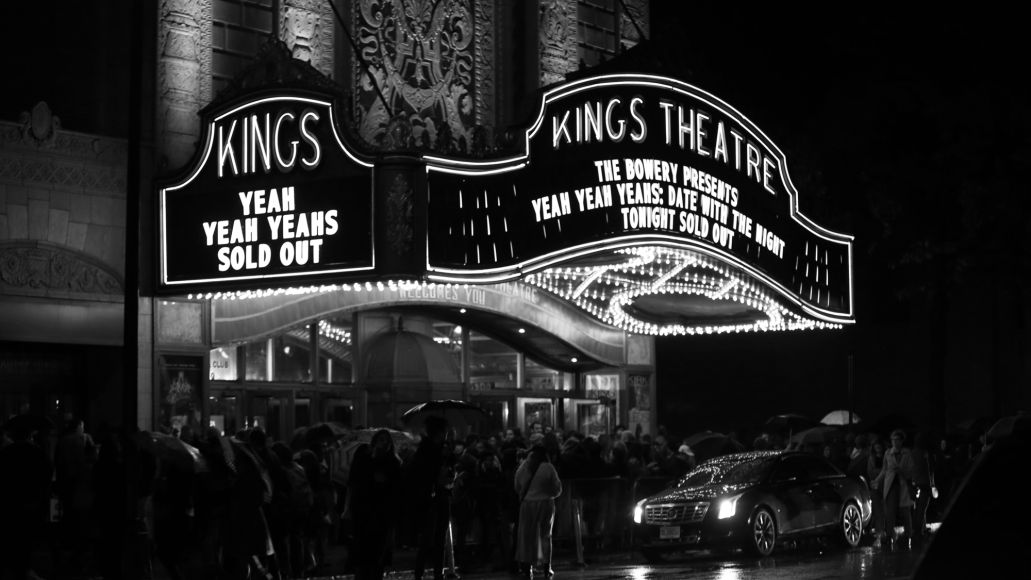 The show actually began with a screening of There Is No Modern Romance (introduced by Meet Me in the Bathroom author Lizzy Goodman, no less), the mini-documentary that captured the band’s 2003 UK tour. As the young and hungry band were cutting their teeth back then, there were plenty of bruises and raw emotions to go around as they rocked sweaty clubs. The swanky Kings Theatre felt like a far cry from the likes of the Mercury Lounge and Bowery Ballroom, but a fitting place for a victory lap. As the credits of the film rolled, the band emerged onstage, kicking off with the reserved “Modern Romance”.

The band immediately upended any expectations of a front-to-back Fever to Tell performance, and it proved to be a smart play. After all, if you obsessed over an album growing up, even the tracklist is likely nostalgic and familiar. Eventually, the band did get to every song from their debut album — (save for “Man”) — keeping the audience on their toes from beginning to end. 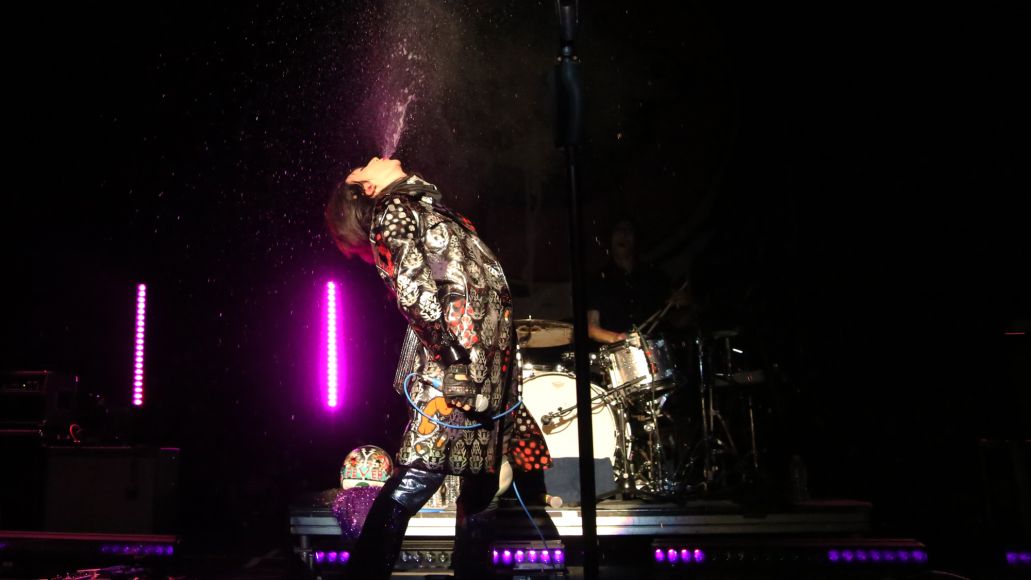 Yeah Yeah Yeahs then cranked up the energy over the sludgy riffs of next tracks “Rich”, “Cold Light”, and “Black Tongue”. On the latter, Karen O kicked a confetti shower into the audience before thrusting the mic into the crowd for the call-and-response of “yeah yeah yeah!” The venue’s layout was mostly seated with a small GA standing area in the front, but by this point, nearly everyone in the theater was on their feet.

Mosquito’s “Under the Earth” proved another early highlight with the heavy reverb on Karen O’s vocals giving an even more delirious, trippy effect than on the studio version. And It’s Blitz!’s “Zero” featured two enormous inflated eyeballs (like the single’s cover art) that the crowd bounced along to Karen O’s frantic cry to “climb, climb, climb higher.” 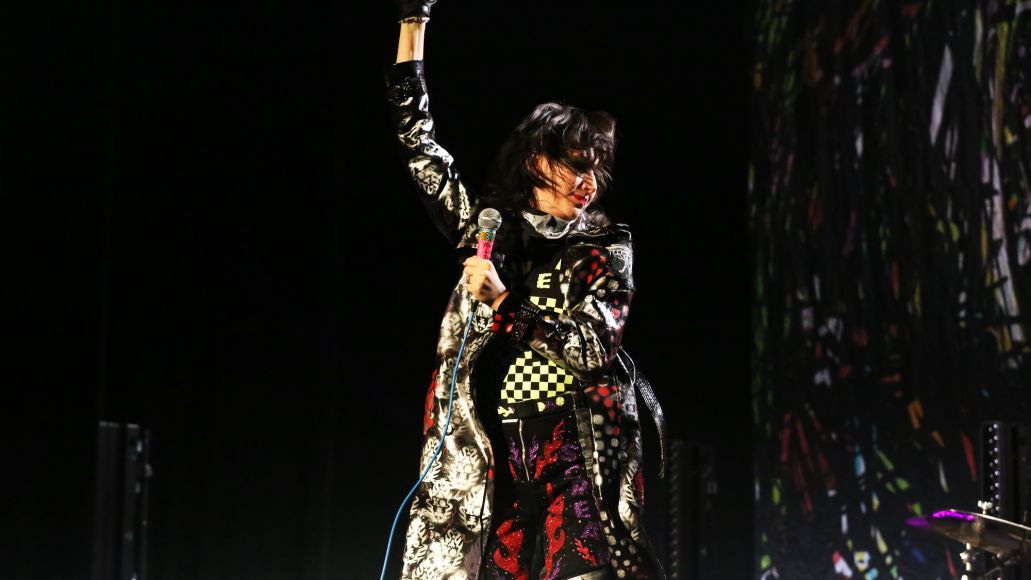 The singer went on to also dedicate the song to moms and dads, a sentiment amplified by the fact that she’s a recent parent as well. The understated instrumentation let her vocals shine, and as the track closed, the singer pressed the mic to her chest with a huge smile on her face. The main set closed with the always-danceable “Heads Will Roll”, as Karen O set off a euphoric confetti storm.

After a brief break, Yeah Yeah Yeahs returned for their first encore, starting things off with an emotional rendition of “Poor Song”. As Karen O sang through the opening, the mesmerized audience was so quiet you could hear a pin drop. As she hit the “’Cause all I see/ Is what’s in front of me/ That’s you” line, she gestured throughout the crowd, and the fans erupted in cheers.

Karen O proved able to handle the guttural screams and jagged vocals of earlier tracks, but her voice shined brightest on the more low-key songs like “Poor Song” and “Maps”. The band then closed out their first encore with “Y Control” and a frantic rendition of “Tick”. 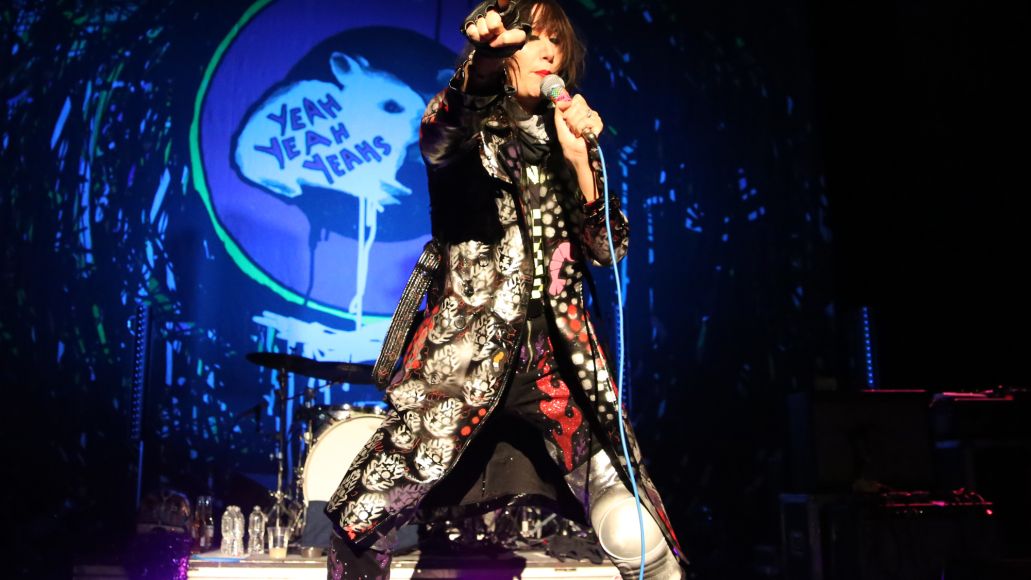 After even more applause, they returned for one final track, “Date with the Night”. Midway through, all three members stood still for a solid minute, as the audience cheered raucously. Like revisiting Fever to Tell, this moment was briefly frozen in time. But the band kicked back into high gear with Karen O unleashing another confetti downpour, showing that, while it’s fun to pause in the past, it’s even more fun to keep pushing toward the future.