Morrissey is almost as synonymous with animal rights as he is with being a musician, and for his November/December tour through the U.S., the singer has teamed up with PETA for an ad campaign called “Holidays Are Murder on Turkeys”. The ad, which you can see below, features a cartoon Moz holding a sign bearing the campaign’s slogan with a cat perched on his shoulder and surrounded by cute pics of the singer with animals. Moz has recruited PETA members to hand the ad out to thousands of fans exiting each show on the 17-date tour behind his upcoming record, Low in High School. 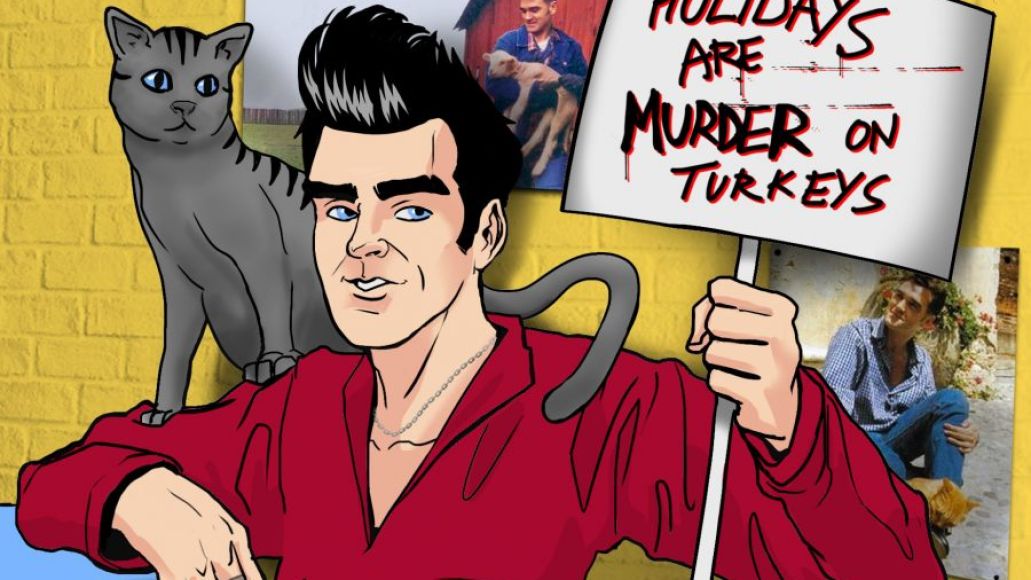 Of the ad, PETA Vice President Dan Mathews said, “We hope this unique artwork will end up on refrigerators across the country as a reminder that animals shouldn’t be sacrificed for holiday feasts.”

This is far from the first time Moz and PETA have collaborated, as he once hosted a PETA Thanksgiving dinner in which a turkey was the guest of honor instead of the main course. The former Smiths frontman and the organization also combined forces last year for a video game based on The Smiths’ “Meat is Murder” called This Beautiful Creature Must Die.

I was at last night’s tour opener in Portland, Oregon, and there were plenty of smiling PETA volunteers handing out the new ad — which will reach the hands of many thousands of fans at cavernous venues like Madison Square Garden — but perhaps even more effective were the incredibly graphic videos of animals in slaughterhouses that played behind the band during “Meat is Murder”. Obviously intended to make people think about their food choices, the videos left more than one audience member around me weeping. It was beyond intense and made me happy to have decided to give the veggie life a go just this week. Yikes.

Check out Moz’s full tour itinerary below, followed by his video for “Spent the Day in Bed”.