Where were you when news emerged in late 2016 that King Gizzard and the Lizard Wizard were not just readying new music for the coming year, but five albums to drop over 2017? I personally recall a moment of pleasant surprise that we’d get to hear new King Gizz so soon after the generous, dizzyingly symmetric Nonagon Infinity, but I remember more clearly scoffing at what seemed like a fool’s errand and experiencing a sinking feeling of doubt: more isn’t necessarily better. Would this be an embarrassment of riches or just a bunch of music I’d eventually delete from my streaming library?

After a long, exhausting year, it’s finally December, and I can safely say that the Melbourne seven-piece outfit of absolute madmen have proved me wrong. To start, I probably should have known better than to underestimate this band in the first place, given how they released two albums each year from 2013 to 2015. But I doubt even the faithful could have expected the breadth and depth of the music King Gizz have put out in 2017: four great albums each distinguished by a unique organizing principle, yet remaining quintessentially King Gizzard and the Lizard Wizard. 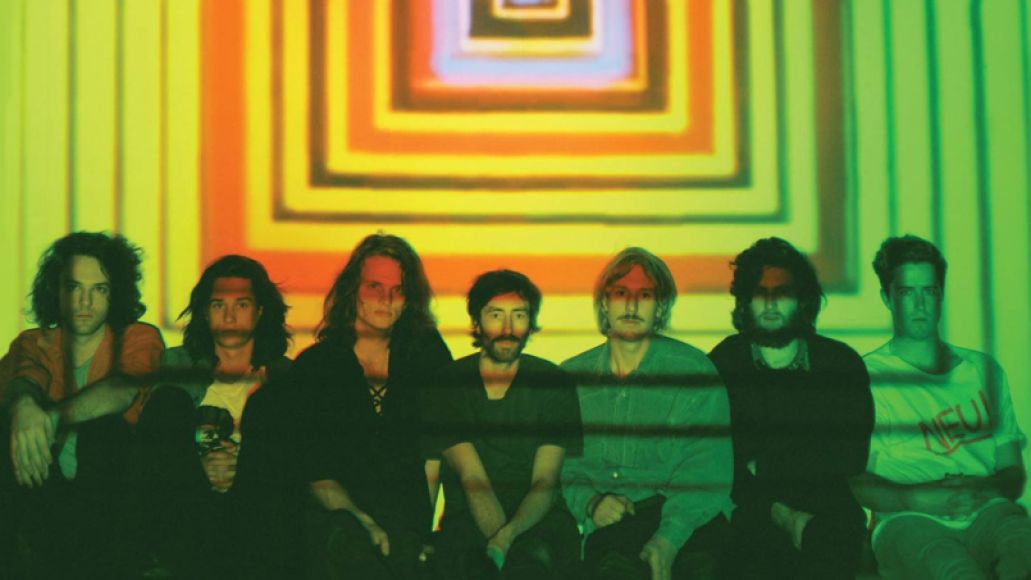 It began in February with Flying Microtonal Banana, named after a guitar custom-made for frontman Stu Mackenzie with extra frets that added quarter-notes, or microtones, to the instrument’s range. The band’s attempts to fuck around with the harmonic conventions of Western music (“NOTHING IS SACRED. AND NEITHER IS THIS ALBUM,” barked a Facebook post-slash-thesis statement) resulted in a krauty, hypnotic record. Four months later, King Gizz went full concept album with Murder of the Universe, a tripartite tale of transgression, malevolence, cyborgs, death, and vomit. Peopled with characters like the Altered Beast, Lord of Lightning, Balrog and Han-Tyumi, MotU gloried in its over-epic narratives of doom and destruction. Then, in the waning American summer/Australian winter, came the left turn that was Sketches of Brunswick East, a rambling, improvisational collaboration with Mild High Club’s Alex Brettin, who stayed at Mackenzie’s house for two fruitful weeks.

Last month, King Gizz took another step towards the five-album mark when they unleashed the proggy rollercoaster, Polygondwanaland. Music writers love to exaggerate, but here the word “unleashed” feels fitting. The band released Polygondwanaland via free digital downloads, offering digital masters, CD masters, and vinyl masters so their fans could take the album’s distribution into their own hands. (As the note on their website encouraged, “Employ your mates, press wax, pack boxes.”) King Gizz’s fans have taken their words to heart – just feast your eyes on this extensive list of vinyl pressings, compiled by Reddit devotees – and though the cynics might dwell on how effectively the band has outsourced the financial and material burden of album distribution, I prefer to focus on how this move has made transparent the importance of community in King Gizz’s madcap mission. Beyond the creative demands of crafting not just one but several good, well-defined albums, it takes a village to handle the logistics of releasing new music in exciting, meaningful ways (to say nothing of the machinations that make King Gizz’s touring schedules possible). There have been many people in King Gizz’s corner, helping them through their bonkers 2017: from the fans and labels who’ve taken to Polygondwanaland with enthusiasm; to musical partners like Alex Brettin and Leah Senior (who provides the unnerving narration on MotU); to other creative collaborators like artist Jason Galea (the behind-the-scenes of how he created MotU’s album cover is a must-watch) and Zac Eccles, the luthier who made the titular Flying Microtonal Banana; to Flightless Records, ATO Records, and Heavenly Recordings; to all the others toiling behind the scenes. An award like Band of the Year unavoidably orients the spotlight onto the seven men of King Gizzard and the Lizard Wizard, but it feels important to recognize all the people who’ve helped King Gizz in this special year. Congratulations – and a hearty thank you – to all.

Read on for an interview with vocalist and multi-instrumentalist Stu Mackenzie, who got on the phone with Consequence of Sound the day before King Gizz’s triumphant homecoming at their very own music festival, Gizzfest, in Melbourne. Together, we spoke about the music they put out this year, the release “strategy” of Polygondwanaland, and, most importantly, details on their fifth and final album, one that Mackenzie says they hope to release “very, very late in the year.”

FIVE ALBUMS IN A YEAR: HOW, WHAT, AND WHY

After we finished making Nonagon Infinity – we really finished recording that at the end of 2015, and that came out early 2016 – we took a little bit of a self-imposed break from recording. I stopped thinking about writing and stuff for a little bit after making that record. In the second half of last year, out of that sort of void, all these very different-feeling song ideas came out; all these disparate, very not cohesive songs came out. It started to feel like they didn’t belong together.

I think that was our initial feeling: that we had to separate these songs out, if not we were going to make a very confused album. It was my own stupid fault that I blabbered it out to someone, probably in an interview or something – once I said it, I felt we had to do it. It wasn’t an overly sort of calculated thing. Like when I said we were going to make four or five records, we had no records done. [laughs] We had nothing. We had just a few songs here and there, probably not much recorded either. It’s been a bit of a race, but it’s been kind of fun as well. 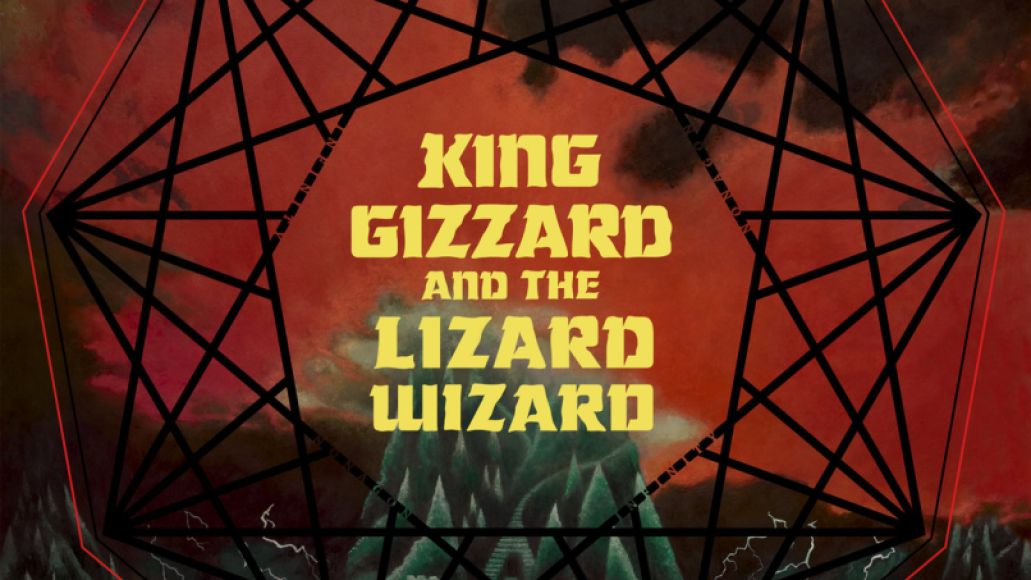 The other thing was we started renting this big warehouse space, and we built a studio in it. That was about two years ago now. After we finished Nonagon Infinity, we moved into this new base, and we had this place where we could jam, and we didn’t have to pay people to record stuff. We kind of could just do things on our own time a bit. It felt like a good excuse to make lots of recordings. It felt like, “We can just go to this area and go to work. It’s like a 9 to 5, it’s cool! We’ve got jobs now, we’re real people!”

I think doing it on our own terms has been nice. You can do it at your own pace, and you don’t feel this pressure; you don’t feel like you’re wasting someone else’s time or your own money. Going back to Nonagon Infinity again, we were close to burning ourselves out on that one, partially because it kind of came after some heavy touring and being tired and spending months away at a time. It was also just a hard record to make – playing all those songs live, trying to record it sort of in one big go was tricky. So I think that was a lesson in what not to do or how hard to push it. I think we’ve had a lot more fun making these records this year. Not to say there’s been less time or work or anything put into it, but it’s been a lot more balanced.

THE GIFT OF POLYGONDWANALAND

When we were finishing Polygondwanaland, I had this pang of guilt where I felt guilty about asking people to buy something again. I think that’s where the idea of making this one free kind of came from. Feeling overwhelmed by the generosity of people who do come to our shows and buy records, I just felt like that one deserved to be a present for everybody.

There was a little reluctance about handing it over, especially something that you’ve been working on for so long. I was particularly kind of stoked and proud of this record. It felt like it was the right one to do this free thing for, because it didn’t feel like it was a throwaway record to me. And it was important to me to do the free one with one of the records that was not a throwaway record, but a record with a lot of love and thought and time put into it. But there was a little bit of hesitancy. Like, “Oh, this is my baby!” But it actually felt good, because there’s a lot of stress that comes with putting out a record, a lot of anticipation and all that stuff. I think doing it this way was nice, in that it’s not yours anymore. It’s everybody else’s. 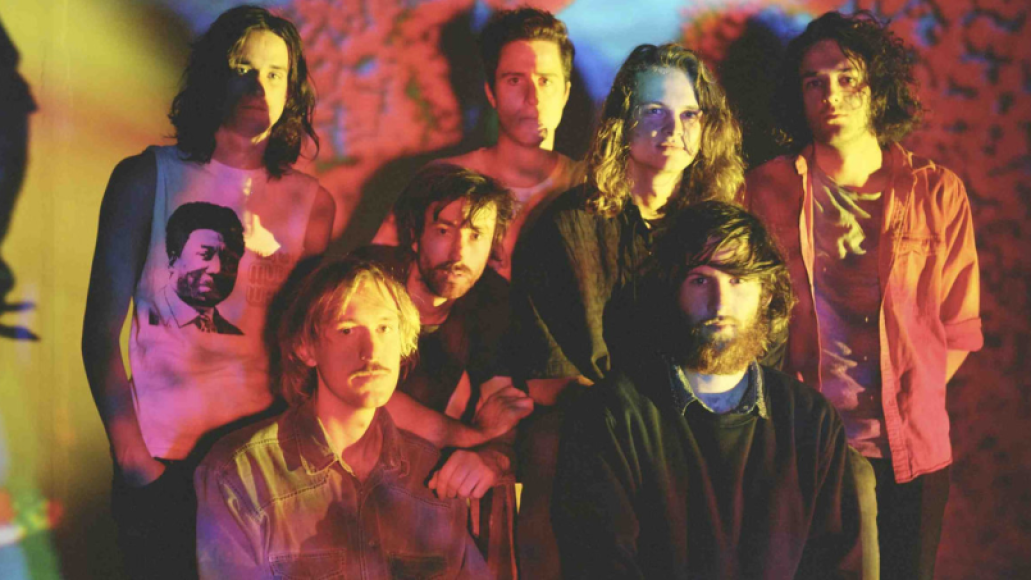 The last one is still coming together, but it’s definitely less “themed” like the other four have been. The four records that have come out so far, they were the initial four that came together, and they were the ones we had ideas for last year. And the idea for the fifth one was to have all of the songs – they’re definitely not B-sides or anything. They’re more songs that didn’t work in any of the the rest of the four records, or they didn’t fit into any of those categories that well, or they came together slightly after when those records came together.

For me, sometimes, songs need a longer or shorter incubation period. Sometimes you don’t really know. So the fifth record is this place for us to put a lot of different ideas that we’re trying to experiment within the song, rather than within the whole record. And for me, some of my favorite songs of the year are on the fifth record. It’s more song-oriented than album-oriented. But things are still possible to change. I don’t even know how it’s December. I don’t know how it happened. The year’s just washed right over me, but then at the same time, when I think about this time last year, it feels like a really long time ago. I’m one year older, but I’ve probably wiped 10 years off my life as well. That’s cool; I can handle that. It’s definitely been a pretty gnarly year, but great as well.

Band of the Year King Gizzard and the Lizard Wizard Can't Stop, Won't Stop, and Don't Need to Stop