Bill Heath almost sounds offended when I ask him if Nathan Fielder is the same in real life as he is onscreen. “Yes, of course,” he says with a mild brusqueness and what might be a touch of surprise. He’s echoing his response to a previous question of mine when I asked if he felt Fielder was emotionally invested in helping Bill find his lost love in Nathan for You’s fourth season finale, “Finding Frances”. “Yes,” Heath said. “Of course.”

And, in retrospect, I feel bad. It’s not as if I were digging for dirt on Fielder or trying to expose him as some kind of playactor. It’s just that television has taught us not to trust it. By now we all know reality TV is nothing but an illusion of reality, a vision carefully produced and edited together by desperate ratings-chasers. And, as much as Fielder’s achingly vulnerable presence seems to cull moments of genuine spontaneity from his Craigslist-sourced subjects, a nagging voice tickles the back of the mind, asking how many takes it took to get it right.

I suppose with my questions to Heath I was trying to find the seam that stitches together the show’s queasy, curious blend of reality and fiction, a seam that’s grown increasingly harder to find with each new season. In doing so, however, I feel as if I’ve turned my eyes from the big, bursting heart at the center of that finale. I also, I think, disregarded the emotional risk that Heath so clearly invested in that journey. Because if anything aired on Nathan for You has been, by its most precious definition, “real,” it’s that, at the age of 78, Heath truly regrets not marrying his high school sweetheart. 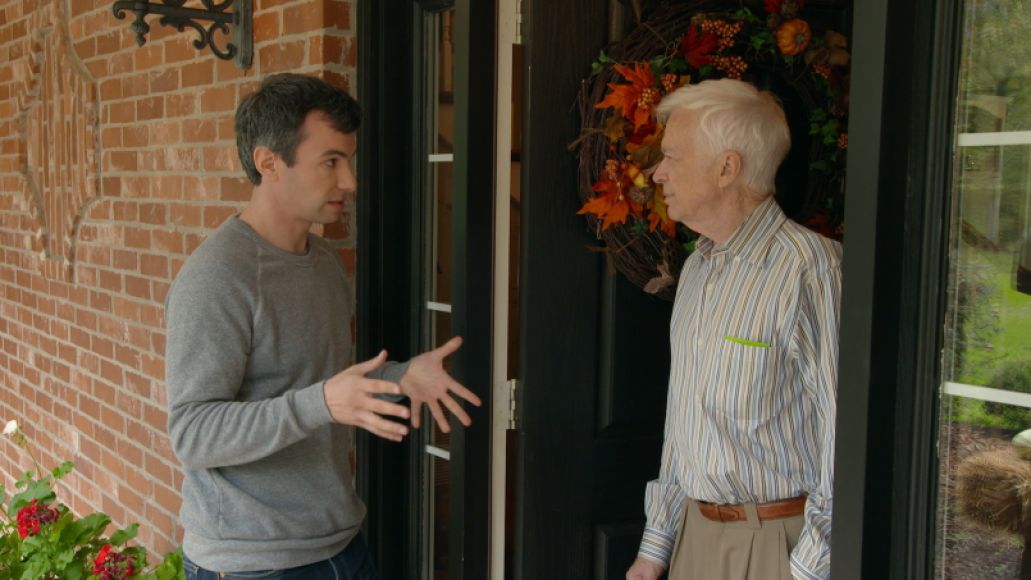 And yet, it’s more complicated than that. When he and Fielder return to Heath’s hometown of Little Rock, Arkansas, searching for clues as to how this woman’s life evolved over the last 60 years and where she ended up, it comes to light that their relationship wasn’t quite as rosy as he made it out to be. Heath feels pain as he reads unearthed letters, ones that reveal his infidelity and desire to choose a career in Hollywood over her. The heart remembers better than the mind, it goes to show; we long for the feelings, but forget the facts. Part of getting older is romanticizing that which is no longer attainable — youth, innocence, and love are a few examples. This is, in large part, what “Finding Frances” is about.

So, yeah, this journey was a very real one for Bill. He reiterated it all for me again on the phone, recalling the climactic call he made to Frances while sitting in Fielder’s car outside of her house. Heath made himself about as vulnerable as one can in that moment, and for someone to insinuate that the person who orchestrated that trip may have been simply playing a character? Well, I would be offended, too.

But “Finding Frances” doesn’t exist in a vacuum. If the above sounds maudlin and sentimental in a piece about our favorite comedian of the year, it’s because that finale wouldn’t have the impact it does if it weren’t for what came before it. Nathan for You lives and dies on vulnerability, which is an odd thing to say for a show that, on its surface, is simply a satire of “expert saves struggling businesses” reality series. But Fielder, who received a business degree from the University of Victoria, isn’t lying when he says he “graduated from one of Canada’s top business schools,” nor is he bullshitting when he says he wants to help these small businesses.

Yes, Fielder is there to make entertainment, but he’s not seeking to goad his subjects into bad behavior, as is the case with many other “guerilla” comedy shows. Rather, Fielder’s comedy tends to emerge from the absurdities of human kindness, the willingness with which his subjects will go along with his schemes. They wouldn’t do it, though, if it weren’t for Fielder himself, who presents himself not with the confidence or swagger of a TV host, but rather the earnestness of someone eager to impress. He’s a kid at a deserted lemonade stand, sitting next to a full jug.

Fielder’s loneliness is a running theme of the series. Whether he pleases a business owner or pisses them off, he still angles towards developing some kind of relationship with them. He fishes for compliments, prolongs goodbyes, and awkwardly asks people out for beers. In the world of the show, at least, no one takes him up on it. We laugh because we relate; we’ve all been faced with an undesirable hangout before, just as we’ve likely found ourselves in the awful position of watching a person’s face fall when we ask them out for coffee.

Only rarely does a villain emerge on the show, and when one does, they’re often invited back. Private investigator Brian Wolfe, for example, relentlessly bullied Fielder in his first few appearances, dubbing him “the Wizard of Loneliness” when not doubting his ability to catch a football. But that only made Fielder that much more invested in becoming his friend. However staged, it was genuinely moving when Wolfe asked Fielder to toss a football around in the season four celebration special. 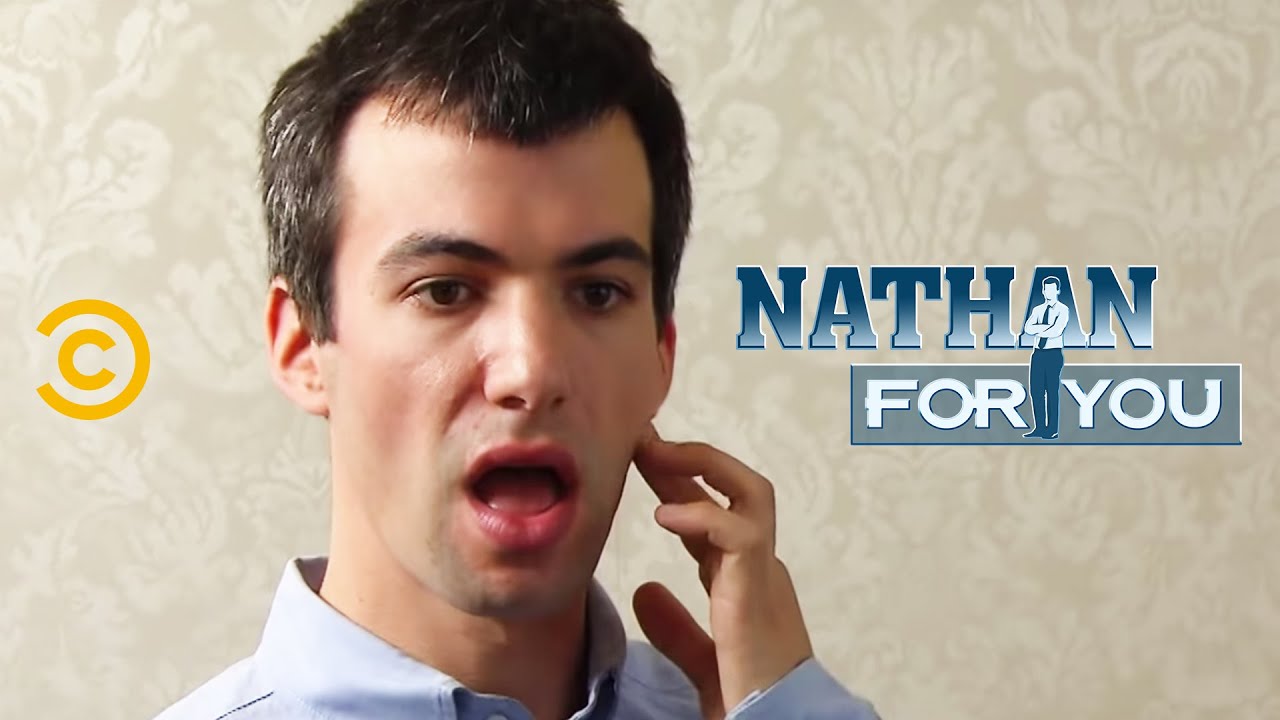 It’s in all of this that Nathan for You distinguishes itself from, say, HBO’s Da Ali G Show, another series that tasked its host with culling comedy via honest interactions with everyday folks. Sacha Baron Cohen’s trio of characters each existed to expose different biases in his subjects, whether it be in the way the older generation interacts with counterculture or the extent of tolerance we offer to non-Westerners. More often than not, Da Ali G Show’s subjects emerged with egg on their face, and, at least at the time, Cohen, the man behind the mask, remained a mystery. Which character did he most resemble in real life? Did he resemble any? How does he interact in the real world?

But Cohen was playing characters. Most comedians do when they set out to rattle the public’s cages. Comedy writer Tony Barbieri transformed into Jake Byrd when infiltrating a Roy Moore rally; actor Mark Proksch was yo-yo expert K-Strass when he crashed a slew of morning shows; and the guys of comedy outfit Chad Goes Deep donned beanies and surfer bro accents when they recently went before the LA City Council to try and save house parties.

We assume, then, that Nathan is a character, too. And the question of what kind of division lies between him and his onscreen avatar has dominated many an article about him. But the general consensus among reporters and colleagues is nothing so sensational. “There’s only about a 10 percent difference between the Nathan on the show and real-life Nathan,” Nathan for You co-creator Michael Koman told Rolling Stone in a recent interview. “The character is just an amplified version of him. He’s awkward socially. Most people in comedy are awkward socially. But he’s a guy with a very solid, wonderful group of friends, who is a loyal, ethical person. He’s a very sweet man, and he’s very concerned with your well-being.” 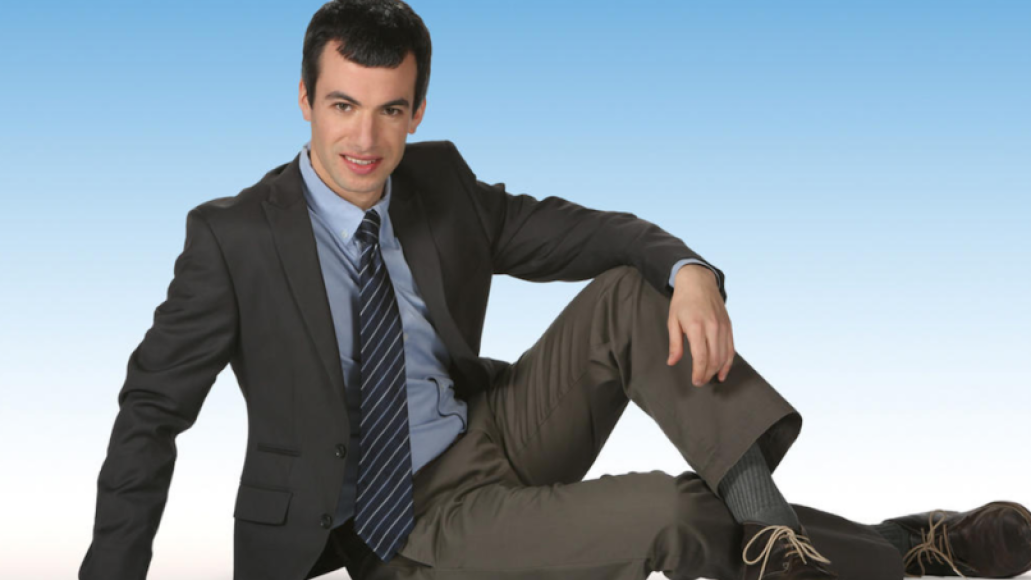 “The scariest thing about the show is that [character] is Nathan,” Tim Gilbert, an old college roommate of Fielder’s said in the same article.

All of these sentiments echo what Heath told me. He describes Fielder as “personable,” “down to earth,” and, perhaps most tellingly, “understanding of people.” He describes Nathan as a friend and says they’re having lunch soon.

When I reach out to Napoli, who hosted both season one’s “The Hunk” and the season four celebration special, he tells me he can’t speak because he’s under a non-disclosure agreement. “I can say,” he writes in an email, “that I am very thankful to Nathan and his Producers (sic) for allowing me to be apart (sic) of their show. The 2 times I met Nathan he was very nice to me. I have no hard feelings toward him nor will I, I am thankful and very grateful for the opportunity. I think he is absolutely hilarious and the show is a big success in my eyes, but hey I’m only a co-host along with him the 2 times during his run. I think he will continue to be successful and we will see him for a long time in the future.”

I also spent time trying to get Wolfe on the phone, but was eventually told the network “may not want Nathan’s off-camera persona / personality discussed as this might diminish his onscreen persona.” The interview never happened, nor did I hear back from several other Nathan for You personalities after multiple messages. 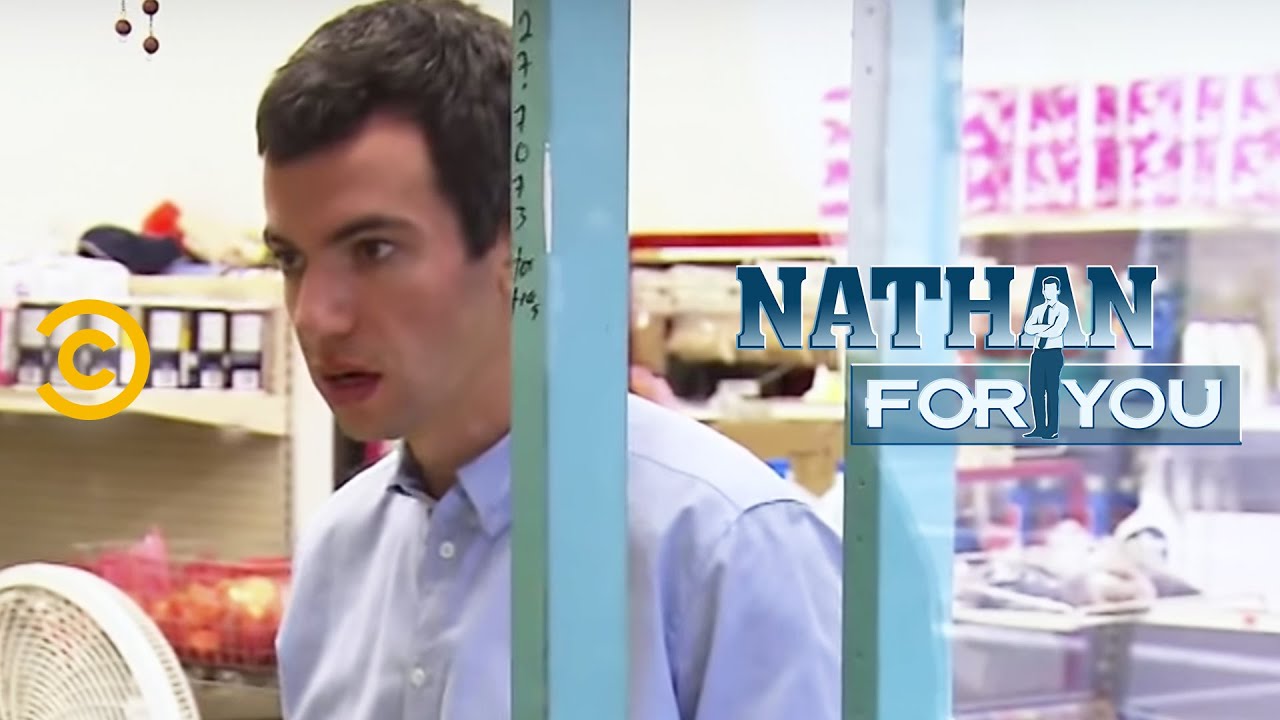 And the question arises: What does one hope to find by looking past the performance? And, in the case of Fielder, is it something we’re even capable of looking past?

He seems to touch on these questions in “Finding Frances”. As Heath spends time with family in Little Rock, Nathan begins biding his time with Maci, a local escort. He pays for her time, and the two chat, have drinks, and talk about his TV show. They hold hands in ways that recall the innocence of a pre-teen crush. One night, they spend some time in a hotel room together, kissing on the mouth. It’s uncomfortable; the hotel room is unadorned, the soundtrack silent, and the kiss unheralded. Nathan brings such a vulnerability to the interactions that we want them to be genuine, yet we know it isn’t. Nearly all his interactions with Maci begin with him paying her, transforming what looks to be human connection into a transaction that calls into question everything that comes after it.

One can see it all dovetailing with Heath’s storyline: Love is never some pure, innocent thing; there are always other factors influencing our feelings, which are fluid and untrustworthy. This theme is drawn out in another direction in the final scene when Nathan returns to Little Rock to meet up with Maci.

“It’s kinda weird having cameras around, right?” she asks.

“We can turn them off if you want,” he replies.

“Could we?” she asks. “Does that defeat the purpose?”

“You’re filming something,” she says. “That’s kind of the purpose, right?” 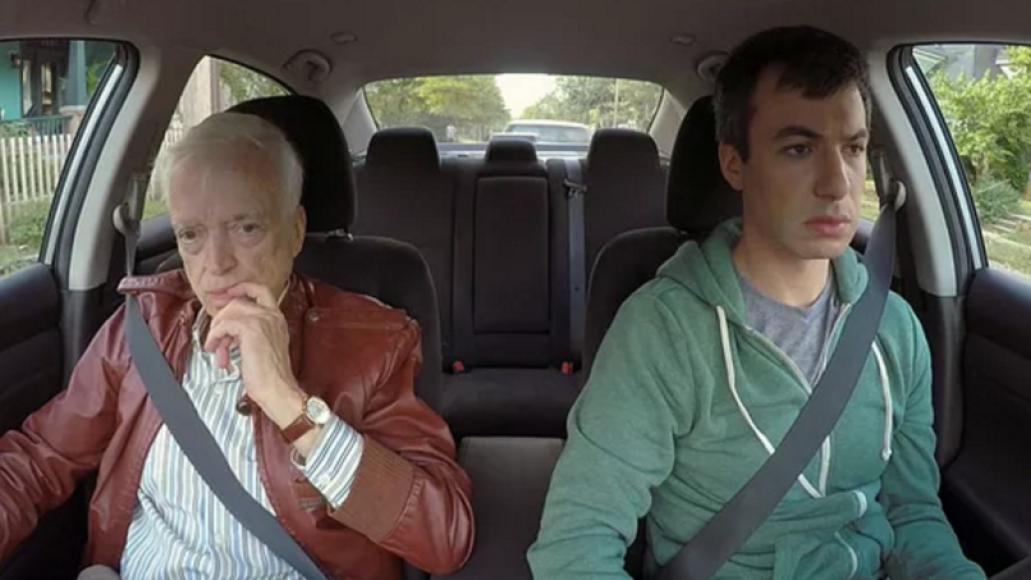 Fielder doesn’t respond. Instead, he says they should get a drone shot. We watch from the drone’s perspective as it soars into the sky, showing us Nathan, Maci, and the camera crew that surrounds them. It’s heartbreaking in its own way, an acknowledgement of the mitigating factors resting just out of sight. Like money, the camera and crew inevitably alter the fabric of any encounter.

And while there’s something tragic about that in real life, it’s the physical presence of those cameras (and Fielder’s understanding of how they affect people) that are intrinsic to the comedy of Nathan for You. He’s been exploiting them since he staged a fake dating show in the first season, well aware of how they serve to amplify a subject’s agreeability and bring out their inner performer. Because we’re all performing when we’re on camera, but we’re all still uniquely us. That goes for Fielder, too.

“I guess you could say that it breaks the fourth wall,” documentarian Errol Morris recently wrote of that final scene in the New Yorker. “But I’m not sure that there’s a fourth wall to be broken here.”

There isn’t. And it’s because he occupies that hairline space between the stage and audience that he remains so opaque. Having thought this all through, though, that’s a good thing. It’s funnier that way.