“You know when you’re with your partner, and something really small happens, and it’s really nothing. Something like, “oh, why didn’t you wait for me?” It can be the smallest thing, but suddenly you look at each other and you get this feeling in the front of your teeth. It’s like—”

A growl of frustration, a sound from the front of her teeth.

It’s possible that Vicky Krieps might be better suited to inhabit the worlds of Paul Thomas Anderson than anyone on the planet. Talking to her about Alma, the magnetic, powerful muse at the core of Anderson’s Phantom Thread, is a bit like taking a stroll down an ordinary street before suddenly finding yourself in a forest, or desert, or on an oceanside cliff. It’s like you’re both speaking English, but she’s also speaking in the language of a tone poem, and you don’t speak tone poem, but somehow you still understand. She draws you in, in a way that encourages tortured similes and overlong explanations of how fascinating the conversation is. 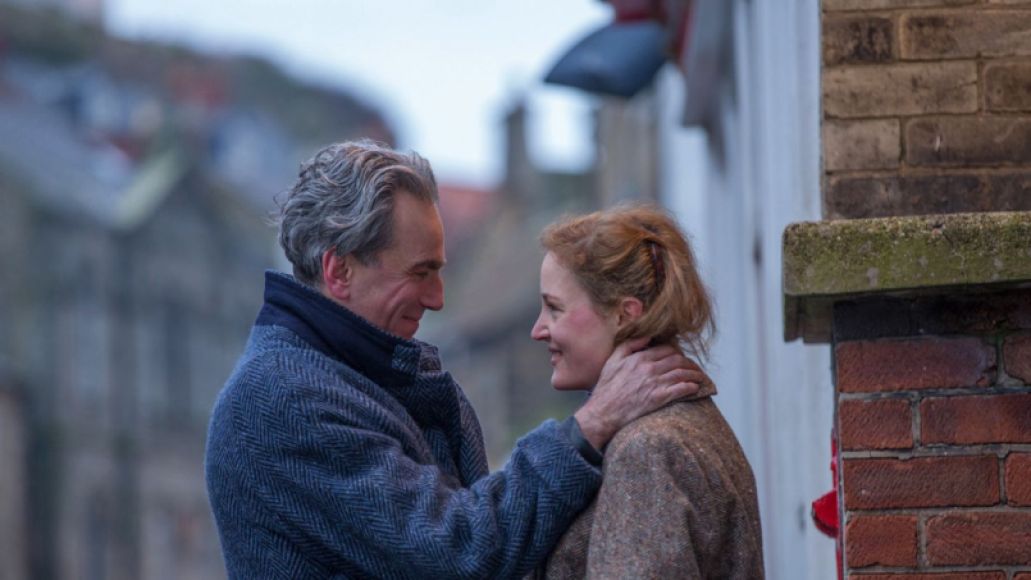 Put more simply: Even when you’re not sure the precise meaning of Krieps’s words, they resonate in your bones a bit. She says, “you get this feeling in the front of your teeth,” and you know precisely what that means, because it makes perfect emotional sense.

As it happens, that’s pretty much what watching Phantom Thread is like, Krieps’s performance in particular. Watching Alma navigate a world that’s not hers — to be precise, the world of fashion designer Reynolds Woodcock, played by Daniel Day-Lewis — is one of the film’s central joys. To the actor playing her, it was simply a matter of seeing where the character would take her, and what she did once they arrived together.

“We knew what was going to happen [in the script], but on the inside, she could have stayed this other girl, person, muse, just trying to survive in this man’s hand,” she says. “The story somehow wanted to be told this way, I have a feeling. It’s also always a journey, it’s always like, ‘Let’s see where the story will lead us. Let’s see where Alma is going to lead us.’”

Where Alma led Krieps, first and foremost, was to a place of openness. Her most important piece of preparation for the work, she says, was “not preparing, by trying to be pure, and open, and innocent. It was almost like meditation. I tried to empty my brain of things I knew. I tried to empty my brain of every idea I had of moviemaking, or being an actress. I try to be really in the moment. So we met in this same moment, and this is where we could work.” The “we” in this equation is Krieps and Day-Lewis, who she most often refers to by his character’s name. “But then,” she says, “I don’t give a lot to names.”

What follows is the rest of our exclusive interview with Krieps, covering everything from Alma’s physical life to the importance of inappropriate embroidery in Phantom Thread. In speaking openly about the experience of bringing Alma to life, she grants us a glimpse into the process of one actor, and its importance in helping to shape one of the year’s best films. We even managed to squeeze in a chat about the best way to prepare mushrooms. It’s a chance to gain insight into the work of an incredibly exciting new artist, and should help shed light on why Consequence of Sound named her turn as Alma our Film Performance of the Year.

On the ‘Method’ and not reading e-mails 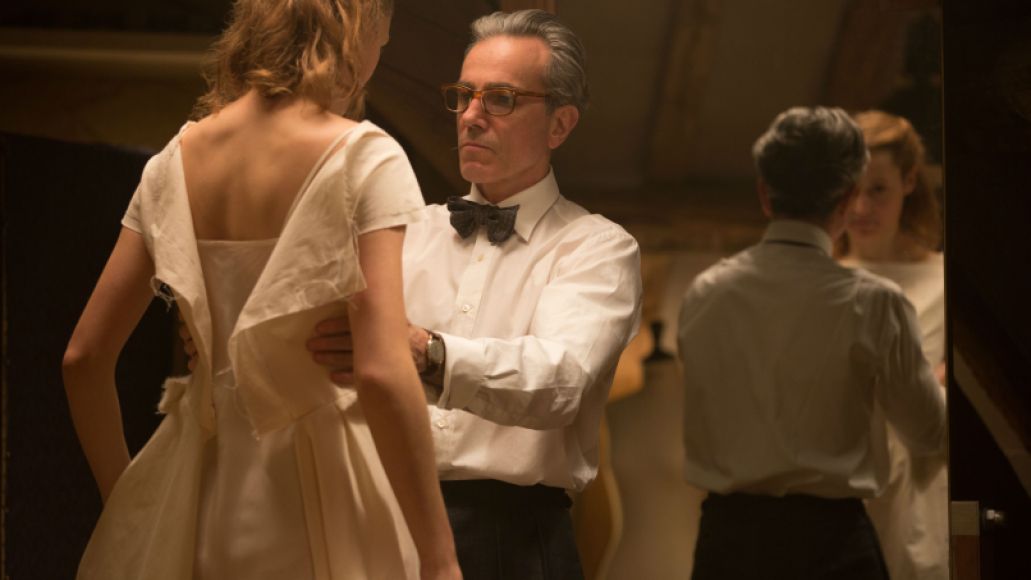 I wouldn’t say that I’m a method actor. I have no technique… Method acting is one of those [terms], one of those ways we to try define something, to try to make it something we can control. I think Daniel Day-Lewis is just a great actor, and it’s hard to describe what he’s actually doing. So saying he’s a method actor is just making it easy for us to understand. I just met him as an actor, and I learned from him so many things.

It’s just a thing I have never much cared about, names. For example, I didn’t know in the beginning that Paul Thomas Anderson was directing the movie. I didn’t read the e-mail, I didn’t read the name properly. I don’t know why, it’s something I’ve always had, I really don’t believe in names. I prefer the person behind or the thing behind the name, behind the word we give to it.

The Language of the Body 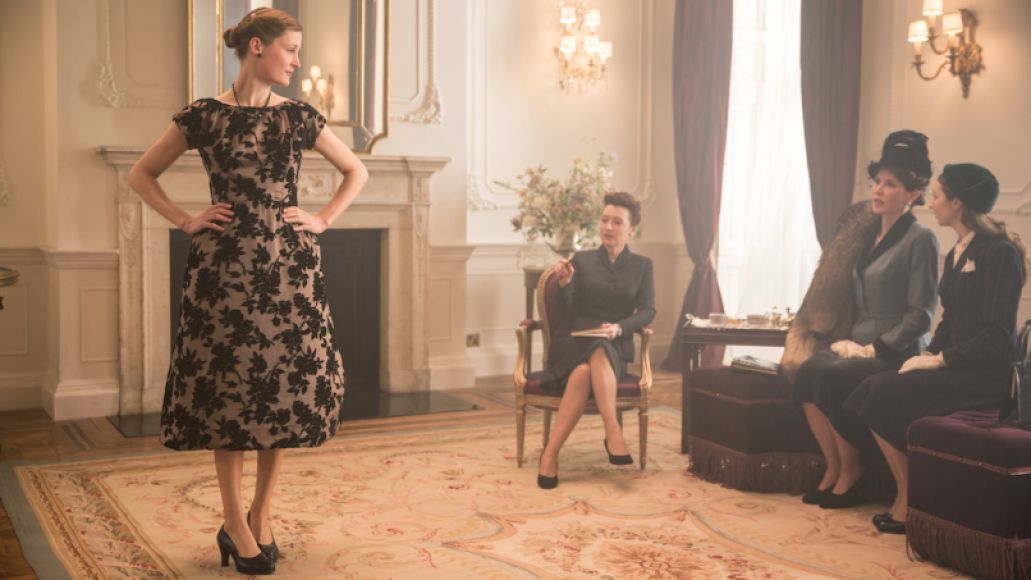 For me, to work on the character of Alma was very closely related to… how she moved. I knew there was not much else I could take as hers. Every other space was taken. Space of the world was Reynolds, the space of things was Reynolds, even the dresses were Reynolds. I knew the side of nature, the side of the body, was Alma’s side. I could make her be alive and breathe. She could breathe in her body and in her language. Although the area I could move in was very very small. I never had the satisfaction, you know? I could never release.

It was always restrained. Everything I would do, the smallest little movement, was already too much. I’m very surprised that it’s something people see. Because I remember doing it and thinking, oh, it’s so small! It’s so, so small, people will not even notice. And now people come to me, and they notice all these little things: of how she’s wearing the dresses, her body language, how it changes, how she becomes more confident in her body.

[For the fashion show] I had to watch videos of models from the ‘50s, from you know, the Dior House, whatever, and see how they moved, because it’s not something I ever did, I never modeled. And they moved differently then. So I watched, and then said, “Now, it’s Alma. How would Alma do this?”

There were two dresses. [For] the one dress, inspired by the waitress uniform [worn in Alma’s first appearance], I tried to make her walk like a girl, you know? Like a child, as if she was not jumping through the room, but something very alive, and free. Then for the other dress, for one like the gown of a queen, I tried to show how Alma could, if she had to, fit into the rules of the time. Knowing that I didn’t trip, and I didn’t laugh, and I didn’t ruin the scene — after this day, I was so happy, I cannot tell you. I was so relieved. It was like I had come up a mountain or something. My mother, she brought me up like a tomboy, so I’m really not used to wearing dresses in front of people! I was very nervous.

On Collaborative Costume Design and How to Feel Like Silk 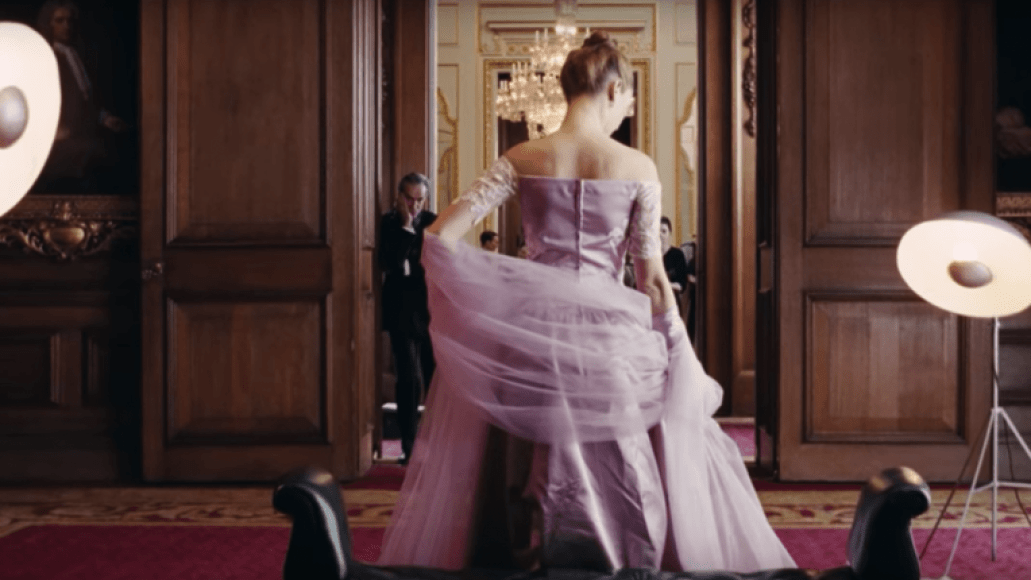 The cutter, Cecile [Van Dijk], she taught me… how to drape, and how to draw, how to sew, all of these things. I went into the Atelier fairly often to try to learn by watching and copying. My favorite is the pink lace one, just because there was this beautiful story of the lace, lace from the 1500s. Mark Bridges designed it, but then it was Reynolds saying, “Maybe we can do the lace [differently],” and the cutter, Cecile, saying, “I’m not going to cut this lace! It’s from the 1500s! It has survived two wars, and I’m not going to be the one to cut it!” Then they’re all asking me what I think, and finally, this dress. It was magical. We would meet in between takes, or after shooting, and discuss the dress.

On the Isolation of Alma 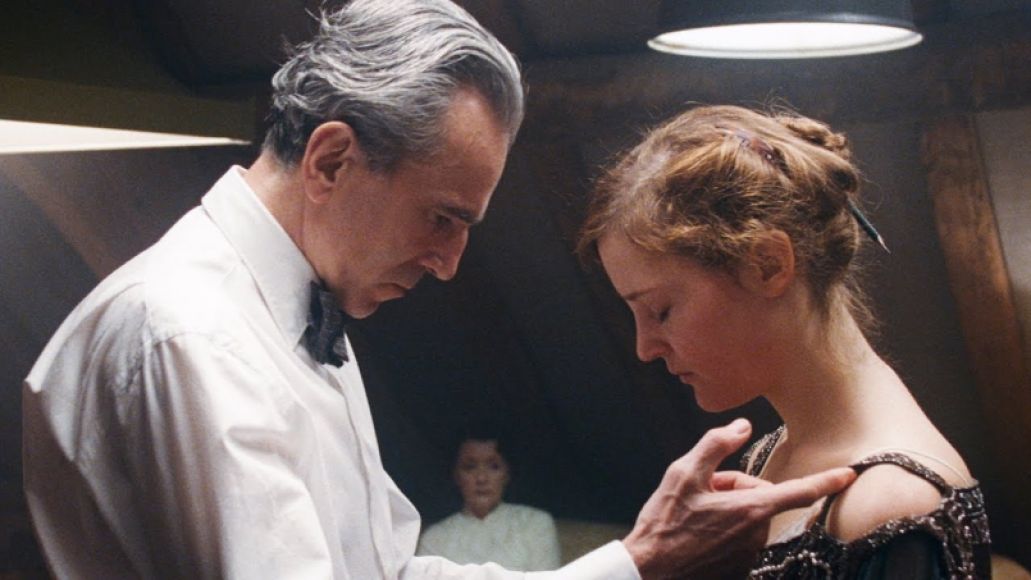 Everyone was busy making the movie, Paul was busy, and Reynolds was… Reynolds was Reynolds. As you can understand, I was very much, as Alma, a part of Reynolds’ world. As she says in the movie, I was his and his alone. To be Alma, I had also to be his and his alone.” [This meant separation, in some sense, even from Lesley Manville, who plays Reynolds’ sister, Cyril.]

[Yet something bloomed, adding complexity to a relationship that would, in a lesser film, perhaps seen the two only at odds.] Without talking about it, without rehearsing, it happened. It was something that was meant to be. [Cyril] would suddenly see Alma, and Alma would see Cyril, and it sometimes felt when we looked at each other like two people looking through a storm, you know? There was a big, foggy storm in between us, and then I found this pair of eyes, somewhere in the chaos, in the middle of it. It was so nice to have some eyes that I could hold on to.

On the Film’s Relationship and That Ending (No Spoilers!) 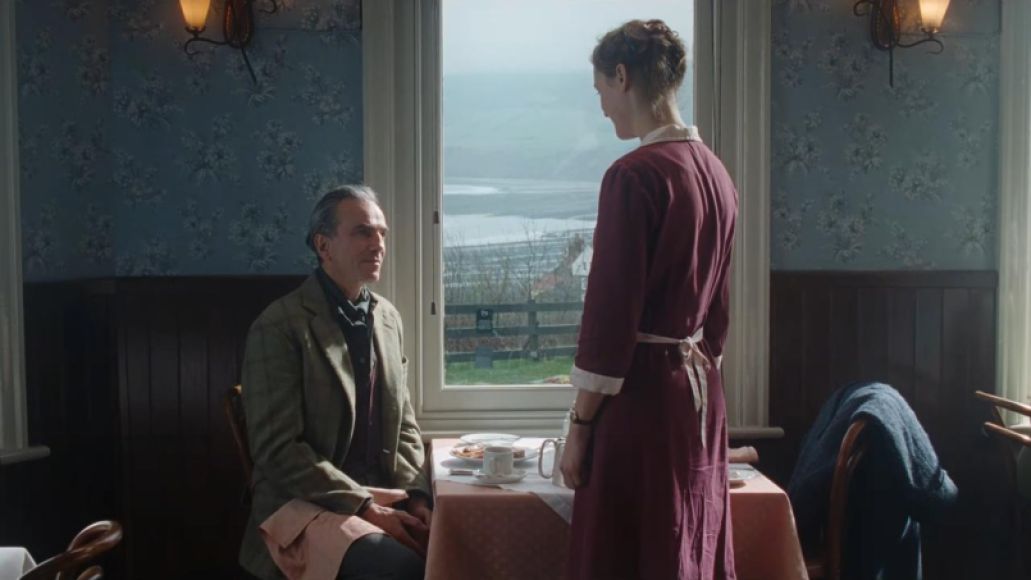 I think now I understand that it’s really about two people meeting, falling in love deeply, recognizing each other, and then trying to make it work. This is what we all do, we try to make it work, because when you really find someone, when you really see someone, it’s like a miracle. Each couple, I think, finds their own way in, and often it’s a game. Some kind of a game.

In this moment [at the end], Alma is so desperate. She can see how he’s so stupidly, stubbornly sticking to his old [in Luxembourgian] muster, his old patterns… She can see that it’s actually hurting him, that it doesn’t do him any good. He’s this great artist, but [at] the price of his own strength, which many artists do. She can see this, and it makes her so desperate — I want to hold him, I want to have him, I want to keep him, I want him to come down, I want him to wake up. It’s almost like this. It does do the same thing, where you feel it in your teeth. [Growls.] Ah, I want, I want, I want. 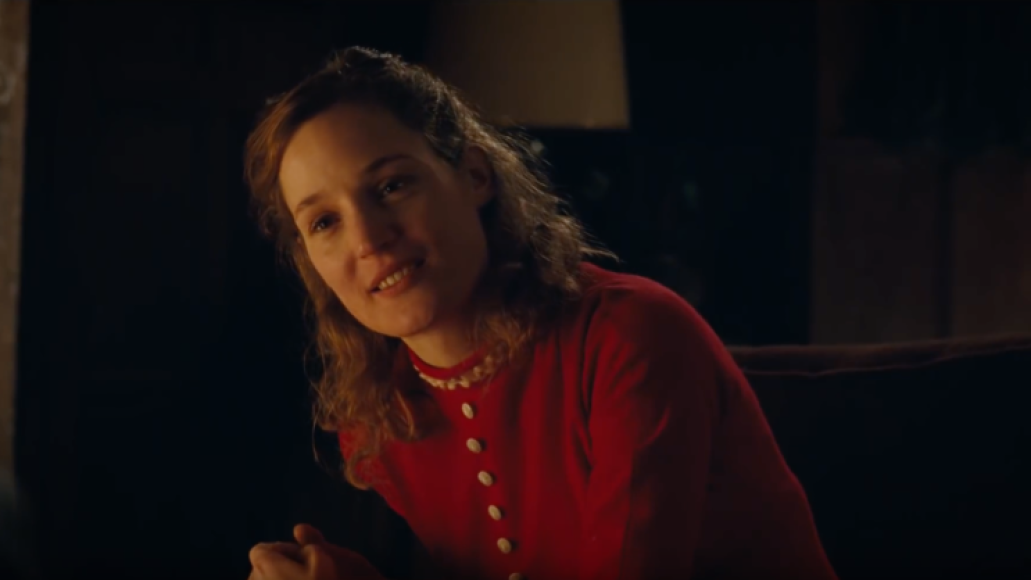 Phantom Thread's Vicky Krieps on E-mails, Mushrooms, and Her Outstanding Film Performance of the Year