Throughout history, the more political tension there is, the more likely somebody will sing about it.

The first American protest songs — and we’re going to define “protest song” as any song associated with a movement for social change — were composed on behalf of both sides of the Revolutionary War. Some versions of “Yankee Doodle” were protest songs although the one most famous in the US today — where Yankee Doodle “stuck a feather in his cap and called it Macaroni” —  was used by the British to mock the colonists. Later it was remixed for the revolution. One version has a young child admiring an American cannon: “And every time they shoot it off/ It takes a load of powder/ It makes a noise like father’s gun/ Only a nation louder!”

Protest songs have historically accompanied any period with strong political disagreements. There were protest songs answering the question of whether all human beings should be treated like human beings or whether some could be treated as property. These protest songs, sung by slaves, such as “Sometimes I Feel Like a Motherless Child”, “Oh Freedom”, and “Go Down Moses”, became the backbone of gospel, blues, rock and roll, and hip-hop. In other words, most of modern music.

Before the minimum wage and maximum work week, there were protest songs about unions. The Lawrenceville Textile Strike of 1912 is sometimes called the “Bread and Roses” strike after a song called “Bread and Roses” that was chanted at the picket line. Political songs were written for and against Prohibition, as well as for and against women’s suffrage. As the country became connected first by radio and then by television, artists such as Woody Guthrie and Bob Dylan took their causes to millions of listeners. Songs about the Vietnam War and civil rights were Top 40 mainstays throughout the late ‘60s and early ‘70s in what was probably peak protest popularity. And many Americans had never even heard of hip-hop until 1988, when tensions between minorities and police officers were boiling over, and N.W.A unleashed “Fuck Tha Police”. The anger behind it was not, I think, very different than what the British and Colonists meant by throwing “Yankee Doodle” back and forth at each other. This is what a good protest song can do: demand change or promise revolution. It can capture people’s attention and focus the national conversation.

Which is what makes our current musical moment somewhat odd. In the most highly charged political atmosphere since the 1970s, when nearly every week brings another tense speech or furious march from both the right and left, America’s most popular musicians are writing surprisingly few songs about it all.

Not everyone is keeping their opinions to themselves, of course. Mavis Staples released one of the strongest albums of the year, If All I Was Was Black, written and produced by Jeff Tweedy of Wilco. Staples’ voice stings like hot smoke, and Tweedy’s grooving guitars provide a perfect complement. The songs address the Black Lives Matter movement, quote Michelle Obama, and express a weary, righteous rage. Joey Bada$$ uses more profanity but hits many of the same notes on All-Amerikkkan Bada$$, the album-length equivalent of taking a knee during the national anthem. Both albums were well-received by critics, but neither had the cultural effect that NFL quarterback Colin Kaepernick achieved when he actually took a knee during the national anthem.

This year in entertainment and politics, athletes led and musicians followed. Colin Kaepernick’s decision to kneel during the national anthem for the 2016-17 season, and subsequent inability to get a contract offer for 2017-18, was among the top stories of the year. Kaepernick shows the downside of speaking out as well as the upside: blackballed from the league, he has probably earned at least a paragraph in the history of civil rights protests of the 2010s. 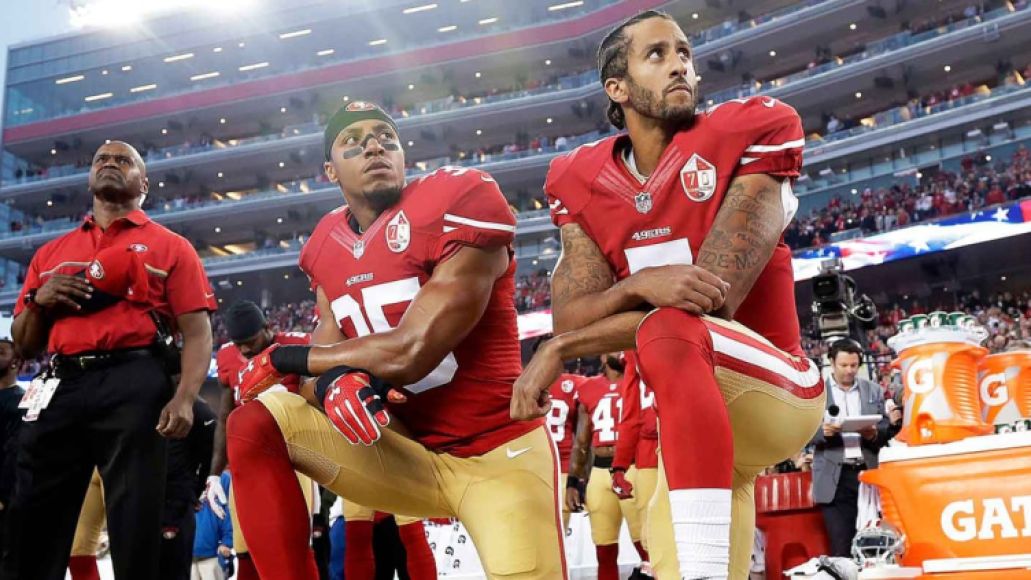 He’s not the only athlete to voice dissent. Basketball legend LeBron James’ tweet calling the president a “bum” was one of the top 10 retweeted posts of the year. Both he and Kaepernick had their profiles raised because of their political involvement; James for the span of a news cycle and Kaepernick for good. In the ’60s, ‘70s, and ’80s, many musicians combined music and politics in a similar way, achieving radio and political relevance with protest songs. But this year, when musicians were in the headlines, it was mostly for their work apart from music.

In 2017, Chance the Rapper was a high-profile advocate for the Chicago Public School system, donating and raising millions of dollars to arts programs, creating an Awards show for teachers, and clashing with Illinois Governor Bruce Rauner. Across Lake Michigan, Kid Rock flirted with a run for the US Senate before bowing out of the race, riding a Trump-inspired wave of dissatisfaction with cultural elites. Perhaps the President has helped erase the line between celebrity and civil servant, or perhaps musicians simply think this kind of activism is more effective than writing songs. Regardless, the two musicians who made the biggest splash in politics did it outside the studio.

If we only look at the impact of protest songs, then we will be looking at stars and superstars from the genres of pop, hip-hop, and country. Although rock is one of the four most popular musical genres in the USA, this year’s the most popular rock mostly pretended politics doesn’t exist.

A lot of the best political music this year was intensely personal. On the first three tracks off his album DAMN., Kendrick Lamar plays tape of Fox News anchors criticizing hip-hop and Lamar in particular. He contrasts it with his niece seeing him on television, screaming, “That’s Uncle Kendrick!” and the song becomes about something else. It’s less direct than If All I Was Was Black, not quite about systemic racism and not even really about a particular racist news anchor: it’s a three-song suite about family and culture and fame and God. Other much-talked about albums, like Vince Staples’ Big Fish Theory or Tyler, the Creator’s Flower Boy approached politics even more obliquely, less interested in Trump than life in Trump’s America. 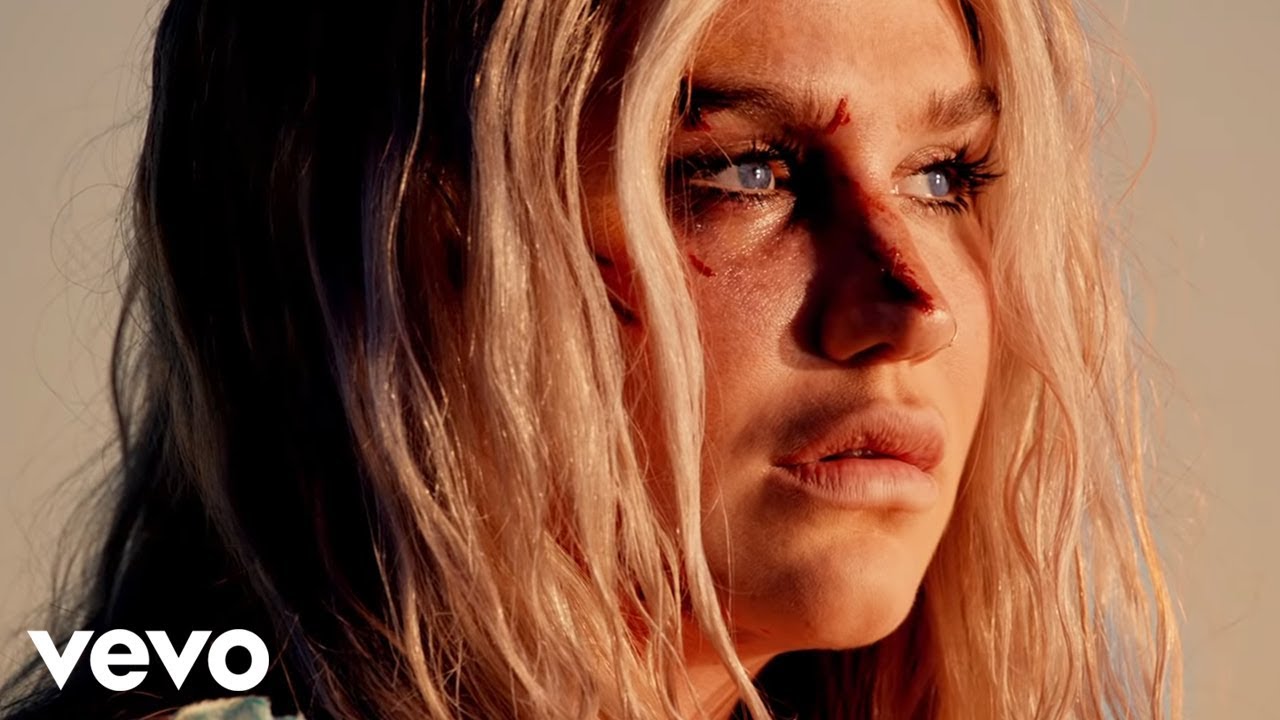 Kesha’s “Praying” is another highlight of the year, and one of the best pop songs of recent memory. After her high-profile legal fight with Dr. Luke, in which she accused him of sexual assault, “Praying” struck a nerve with the #MeToo movement. On its own, it’s an effective ballad of a woman wronged. But factor in Kesha’s alleged experiences, and it’s a sonic wrecking ball about trauma and trying to heal. The way she wails, “I hope you’re somewhere praying/ I hope your soul is changing!” is devastating.

Not all protests came from the left. A song by country veteran Neal McCoy became a minor hit. McCoy has been on country radio since the ’90s, and some of the success of his most recent song was surely due to its title. “Take a Knee, My Ass (I Won’t Take a Knee)” seems at first like an unusual request or command. It’s grammatically confused but brilliant in the way a Kanye West rant can be brilliant, or brilliant like a Trump tweet; it demands to be talked about. It’s also a reminder that we live in different worlds. One side says taking a knee is about racial injustice; another calls taking a knee disrespectful to soldiers. These conversations exist in separate echo chambers. Nobody’s mind is changed; but then, that’s not the mark of an effective protest song.

Because music doesn’t really change peoples’ minds; in fact, research suggests that pretty much nothing does. Effective protest music doesn’t work on people you disagree with; it works on people who already agree with you, activating them, getting them energized. For example, in 2017, the term “Eminem” was trending because of a BET cipher in which he unleashed a tirade against the president. He threw a dizzying display of insults, showed off a comedian’s sense of timing, and effortlessly rhymed “orange.” 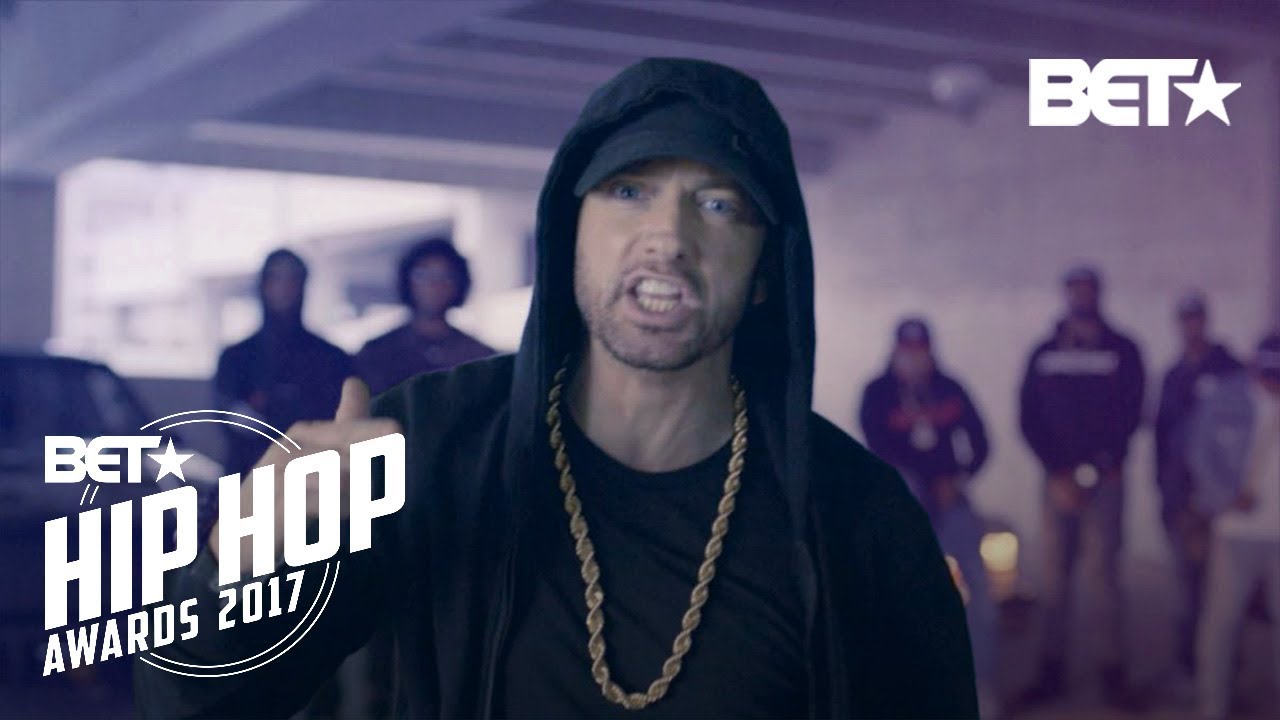 It’s also effective for what it doesn’t do: it doesn’t cite facts or figures. The arguments are emotional instead of rational, and emotions are what get people energized. Think of “Fuck Tha Police” or “Bread and Roses”, the song chanted during the 1912 strike. They don’t discuss the problem in percentages. They demand something emotional: “roses, too.”

Eminem’s pre-written “freestyle” was shared and reshared in a way that doesn’t often happen to Eminem songs these days. But what does that actually mean? It wasn’t front-page news, like either “Bread and Roses” or “Fuck Tha Police”. Sometimes it was shared by his fans, and sometimes it was as a political meme, like one of those videos named “Watch [commonly held belief] get DESTROYED by [person stating their opinion!].” It was shared for a couple days in a few corners of the internet, and then it was all but forgotten. The vast majority of Americans have certainly never heard it.

With all this in mind, is protest music still relevant?

It’s tempting to say, “Time will tell,” but I think we already know the answer. From the ’90s through today, as the largest swaths of American culture broke down into smaller and smaller sub-groups, the sway of protest songs has diminished. Many musicians are avoiding politics altogether while some are finding different paths to effect change. The protest music that still gets written will almost never be heard by anyone who disagrees with its message. It will move through small networks governed by invisible algorithms, and even in those networks, it must compete with hundreds of other political memes, with photos and jokes and smart little quotes.

And this, ultimately, is why protest music is sliding towards irrelevance. Protest songs used to be portable political messages. They were musical memes, viral content for a pre-internet age. Like travel agents, video store clerks, mapmakers, and more, the protest song has been electronically elbowed out of the way, replaced by political protests that are cheaper to make and easier to consume. In the long term, people will find ways to sing their politics. In the short term, a few songs will still whip from computer to computer getting people riled up. Artists will find outlets for their political feelings, but it will likely come outside of music or in songs that are intensely personal rather than anthemic. For now, the days of protest music dominating the national conversation are gone.

Protest Music Disappeared in a Year of Protests