With the success of Black Mirror, it appears the era of the prestige sci-fi anthology series is back. Now, Amazon, nipping at Netflix’s heels, has released Philip K. Dick’s Electric Dreams, a 10-part adaptation of short stories penned by the eponymous sci-fi writer. Like Mirror, Electric Dreams is a mixed bag – one or two good stories, one or two mediocre ones, and the rest falling somewhere in between. However, look no further than “The Commuter” for the show’s true masterwork, the one episode that elevates its old-fashioned source material into something lyrical and thought-provoking.

Loosely adapted from Dick’s short story of the same name by writer Jack Thorne (Wonder) and director Tom Harper (Peaky Blinders), the premise of “The Commuter” is simple: doddering train station employee Ed (Timothy Spall), is given mysterious clues to a hidden, off-the-books stop leading to a town called Macon Heights. The town is an idyllic respite from his problems, most notably a disturbed teenager (Anthony Boyle) prone to violent outbursts, promising a difficult future ahead for father and son. However, Ed returns from Macon Heights to an alternate world where his son was never born. The town has granted his wish, albeit in a “Monkey’s Paw” kind of way. 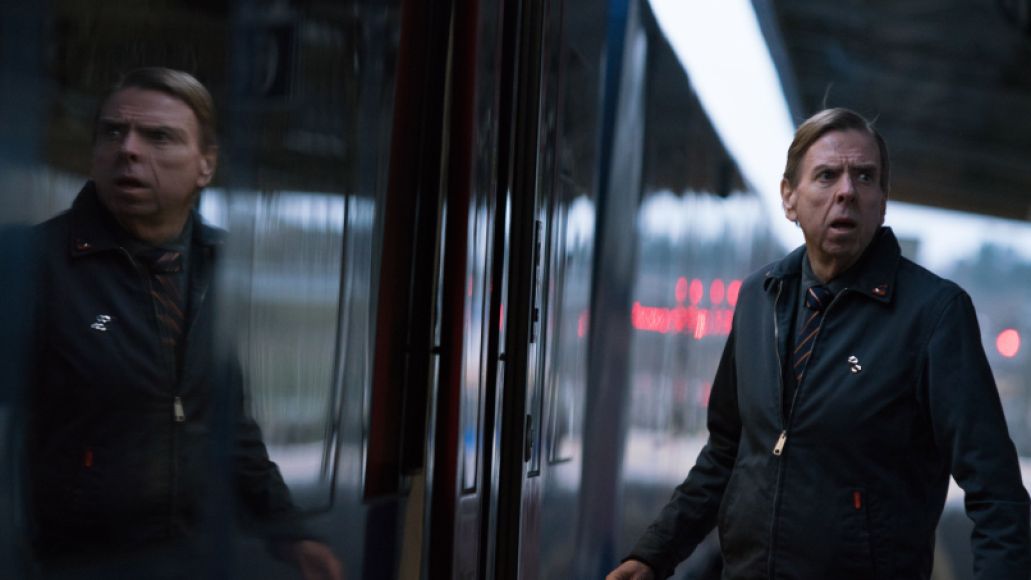 The mystery of Macon Heights is never truly solved, but it doesn’t need to be. It’s a vehicle by which to explore the most pertinent questions of “The Commuter”: What if there was a place where you could not just forget about your problems, but erase them? Whether it’s a parent with a child who’s more work than they bargained for, or someone in a dead-end job or soured relationship, fantasizing about the road not taken is deeply human. Even when Ed demands his son back, he wrestles with deep questions. Should he take his son back, knowing the road ahead for them is painful and full of strife? Or are their fleeting moments of love and fellowship worth all the strain?

Carrying the weight of these queries on his sloped shoulders is Spall, captivating with a wounded, empathetic lead turn. He’s a flawed dad, but a well-meaning one, an ordinary joe tempted by the prospect of eased burdens. Whether he’s poring over home movies of his now-erased son, or pleading with Macon Heights’ administrator (Tuppence Middleton) to bring him back, Spall’s dynamism is “The Commuter”’s greatest strength, second only to its ideas.

While Electric Dreams is more diverse in tone and subject than Black Mirror’s incessant nihilism, it struggles to maintain Charlie Brooker’s timeliness with Dick’s dated stories of androids and body snatchers. The rest of Electric Dreams is still solid – check out stories like “K.A.O.” (written/directed by Mudbound’s Dee Rees) or “Impossible Planet” for more of the series’ highlights – but it never reaches the intellectual heights of “The Commuter”.

Line of the Week: Middleton’s ethereal representative to Macon Heights offers a curt retort to Ed’s request to restore his previous life: “Your son was a shit son, and you were a shit father to him. What’s great about that reality?”

Children of Men: Electric Dreams’ opening titles are a mélange of futurist images, including the delightful absurdism of a nude man gently caressing his pregnant belly.

Up Next on TV Party: David Letterman returns to TV with his monthly Netflix talk show, My Next Guest Needs No Introduction – does he still have it? And does the late-night format translate to streaming? Stay tuned for Matt Melis’ two cents.

If You Only Watch One of Philip K. Dick’s Electric Dreams, Make It “The Commuter”