The Sunday Matinee takes a look at a classic or beloved film each weekend. This week, Clint Worthington revisits David Bowie’s debut role two years after his tragic passing.

It’s been two years since David Bowie left us for his home planet, and we haven’t been the same since. Like Thomas Jerome Newton, the protagonist he portrays in Nicolas Roeg’s 1976 sci-fi cult classic The Man Who Fell to Earth, Bowie burst onto the pop-culture stage seemingly out of the wilderness, a challenging and idiosyncratic performer who scratched heads as much as he blew minds. From his chart-topping, experimental albums to his equally ambitious film and TV work, Bowie’s status as a cultural icon was (and remains) inimitable. Right out of the gate, in his debut role in The Man Who Fell to Earth, Bowie capitalized on the androgynous, gender-bending charisma that made him a rock sensation to tell a sensitive, personal story about cultural decline and the alienation of celebrity, one which also serves as a fascinating mirror into his own sense of stardom.

Loosely adapted from the novel of the same name by Walter Tevis, The Man Who Fell to Earth follows Newton, a traveler from a mysterious alien planet plagued by drought, to the third rock from the sun in search of water. His plan: to become a billionaire tech mogul (think Ziggy Stardust meets Elon Musk) using the patents to various advanced technologies he brings with him, then using that largesse to construct the spaceship necessary to bring Earth’s water back home to his planet.

Along the way, however, Newton is sucked in by the strangeness and materialistic allure that comes with late 1970s American capitalism, which is Roeg’s true concern. Roeg, one of the most vital and experimental filmmakers of the decade, cut his teeth on similarly hallucinogenic pictures like Walkabout and Don’t Look Now, infusing Man with a similar level of surrealism. Linear time is a mere suggestion in Man, jump cuts and time jumps combining with Roeg’s roaming camera and idiosyncratic sound design to disorient the viewer as much as Newton feels disoriented on Earth. The first time we see Bowie’s face, he gapes at us upside down as he lies on a bench outside a small-town store, arming us for the topsy-turvy world we will soon inhabit for two and a half hours. 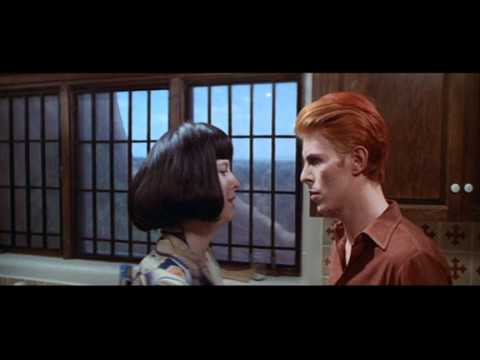 Far from a conventional sci-fi story, Man sees Roeg turning the strangeness of outer space inward, making Earth feel more like an alien planet than wherever Newton may come from. Roeg’s hallucinatory filmmaking is a vital component to Man’s sense of wonder, from its frenetic cross-cutting between Japanese kabuki and Rip Torn’s lovemaking to its numerous musical and visual dissociations.

At the center of it all is Bowie, his debut performance crackling with the energy of the unrehearsed. (Indeed, Bowie claims he never read the full script and was in the depths of a coke addiction and nervous breakdown during filming. This resulted in him playing a character equally unprepared for the world around him, making those circumstances features rather than bugs.) Pop stars frequently try to transition to acting, often with mixed results, but Bowie’s decision to never stray far from his pop-star persona in his acting roles served him well, especially here.

The youthful androgyny of Bowie in his prime is perfect for the frail, delicate Newton: he barely ever speaks above a whisper, practically a babe in the woods. There’s something alluring about the innocence with which Bowie imbues Newton, something that seems to come from cultural differences as much as planetary ones: “I’m British,” he continually claims in his warm Londoner accent. When standing next to the brusque calculation of characters like Bryce and Bernie Casey’s tech rival, Mr. Peters, Britain may as well be as far away as Neptune.

Bowie’s success in Man owes just as much to his look as it does to his performance, as it was with his pop career. With his angular cheekbones, strawberry-blonde hair, and unconventional sense of fashion (all wide-brimmed hats and silver jackets), you’d be forgiven for thinking Man Who Fell to Earth was just one long Ziggy Stardust music video. Newton’s genderlessness aligns perfectly with the androgynous persona Bowie cultivated in his own pop-punk orbit, being neither male nor female in order to appeal to both. When combined with the small, subtle reveals of his true alien physiology – yellow, reptilian eyes, no genitals or butt crack – Bowie’s uncanniness is compounded to stellar effect.

The combined efforts of Roeg and Bowie amount to more than a charming performance and kaleidoscopic visuals. At its core, Man is a nihilistic screed against the materialism of American culture and the hubris of our technological advancements. Through Newton’s eyes, we see the sheer lunacy Earth has to offer, teased early in the film by an aggressive closeup of a collapsing bounce house in the middle of the small New Mexico town near which Newton first lands. To Newton (and Roeg), Earth culture is positively carnivalesque. It only gets worse from there as Newton’s company, World Enterprises, becomes one of the world’s biggest corporations.

Compare this to the fleeting moments of Newton’s home planet we are given as flashbacks and visions, and Earth seems far stranger. Roeg’s lo-fi sci-fi aesthetic offers up glimpses of Bowie, his wife and two kids wandering the desert covered in what looks like a particularly creative application of cellophane and rubber tubes. There’s a quaintness to these images, showcasing a nuclear family of the sort none of our earthbound characters seem to enjoy. Sure, Newton’s filthy rich on Earth, but should he abandon his mission just because the trains are better on Earth?

These moments of significance extend to Newton’s character as well, his journey offering disquieting parallels to the alienation and commoditization Bowie himself likely felt as one of the world’s most popular figures. Newton’s rise to fame and riches goes by in one of Roeg’s signature time jumps, going from zero to mogul in record time. And yet, Newton remains remote, unapproachable, shaken by even the movement of a herky-jerky hotel elevator. Everyone around him wants something from him and yet is awed by his power, his coterie divided into those who have his best interests at heart (Buck Henry’s kindly patent attorney) and those who don’t (Rip Torn’s calculating, confused scientist).

In the middle of all this is Mary Lou, a devout Christian who warms up to Newton by taking him to church (it’s a delicious irony that Newton’s one moment to sing a church hymn proves him to have a tin ear), then taking him home. Look deeper and you can see the shaky, codependent relationship between the real Bowie and his most ardent fans; Mary Lou is nothing if not an especially successful groupie, someone drawn to Newton’s talent and celebrity. As the years go by, and their on-again, off-again relationship progresses, you can see the drain their commitment has on each other, their needs escalating into dangerous sex play with blank-loaded guns (one of Roeg’s more psychedelic sequences).

The film’s final act is perhaps Roeg’s (and screenwriter Paul Mayersberg’s) darkest punchline to Newton’s well-intentioned but inevitable fall from grace. Nothing that is good can ever last, and just as Newton is about to fly home in his spaceship (amid a mob of press, and even a cameo from the Neil Armstrong), Bryce and Mr. Peters sabotage Newton’s flight, capture him, and kill all his associates. It’s a darkly comic montage of falling barbells and strange moments like Buck Henry apologizing for not breaking the glass two goons try to throw him out of on the first try.

From there, it’s a slow crawl towards ruination for Newton, held prisoner in a palatial hotel room, tortured and mutilated to become more human. For Newton, becoming more human is the real tragedy, which creates some interesting subtextual parallels to mainstream culture’s desire to label and identify Bowie as one thing or another. Meanwhile, Roeg wordlessly allows years, if not decades, to pass for everyone else, occasionally checking in on Bryce and Mary Lou to see them older, saggier, and more despondent. All the while, Newton remains pristine and youthful – a china doll that’s already been broken. 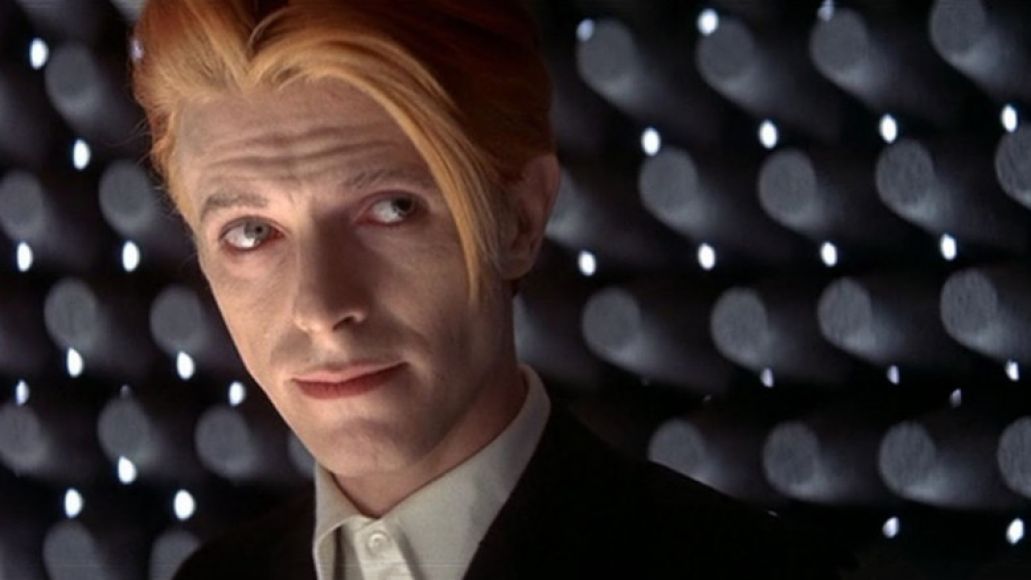 This downbeat ending is par for the course for a lot of speculative fiction, but fits particularly well in Roeg’s brand of sci-fi fable. There’s an otherworldly nihilism to many of Roeg’s works: whether it’s through two abandoned children wandering the outback in Walkabout or Art Garfunkel’s sick obsession in Bad Timing, he doesn’t seem to think we can crawl out of our collective cultural and material funk. After all, Newton doesn’t make it back to his home planet by the end (that’s one thing Poochie has on him), his experiences leaving him a miserable drunk with no hope of saving his family or his people.

The exploitation of Newton in The Man Who Fell to Earth feels doubly tragic in the wake of Bowie’s death. In many ways, both Newton and Bowie were too good and pure for this world, especially in the divided and difficult political climes in which we find ourselves. Unlike Bowie, Newton’s accomplishments were pragmatic, clinical; he demonstrably failed in his mission after getting distracted by the hum of the television screen and the sting of alcohol. Bowie, on the other hand, was a figure of constant creative experimentation, juggling chart-topping singles and albums with a robust acting career that celebrated the kind of strangeness the Earthlings of Man Who Fell to Earth simply weren’t ready for. If he were still around in 2018, would he be a balm in such a trying social and political climate? Or would he suffer the same disillusionment as the rest of us?

We can at least be thankful that, unlike Newton, Bowie didn’t spend his waning years in a dissociative lethargy; with the release of Blackstar a mere two days before his death, he was a pioneer until his dying day. It’s moments like these, and the experimental majesty of his work in The Man Who Fell to Earth, that cement Bowie’s legacy as a true original. As one reporter says of Newton’s accomplishments in the film, “There’s no parallel with what [Bowie] has done and what he is now doing.”

Remembering The Man Who Fell to Earth, Two Years After David Bowie Returned to the Stars