Look, The X-Files is one of the greatest television shows of all time. Nobody’s going to dispute that. What Chris Carter and his team of crackerjack writers did throughout the ’90s is simply unbelievable, on par with past greats like Rod Serling and Larry Gelbart, at least in their ability to evolve the medium. From 1993 to 2002, they never stopped surprising or challenging their fans, be it twisting the sci-fi genre into unshakeable drama (see: “One Breath”, “Closure”) or flipping the script entirely for unquenchable comedy (see: “Jose Chung’s From Outer Space”, “Bad Blood”). Even when David Duchovny downgraded himself to a guest star by Season Eight, Carter rebounded with aplomb, making Fox Mulder’s disappearance one of the bigger events on television at the time, all while creating a hero out of the T-1000 (Robert Patrick), who followed Gillian Anderson’s exceptional lead as Dana Scully. Some fans hated it, but only because they missed their beloved sunflower-eating true believer.

Where things took a real nose dive is in Season Nine. Because no matter how talented she is — go ahead and binge through Halt and Catch Fire, why don’t you — Annabeth Gish was never going to elevate an underwritten and confusing character like Monica Reyes. And when it became obvious she was being positioned as the replacement for Anderson, who was then eyeing Duchovny’s footsteps stage left, the cracks to the series became gaping fissures and the magic dissipated fast. Yet that was also happening narratively, specifically with Carter’s cherished mythology arc, which became so deluded and so confusing that even diehard fans are often hard-pressed to remember what exactly happened without muttering something along the lines of “Um, supersoldiers? I think?” By then, it was clear that Carter had nothing left to say, that his story had ended probably two seasons back, and that whatever magic was left in the tank remained in the free-form Monster-of-the-Week episodes. 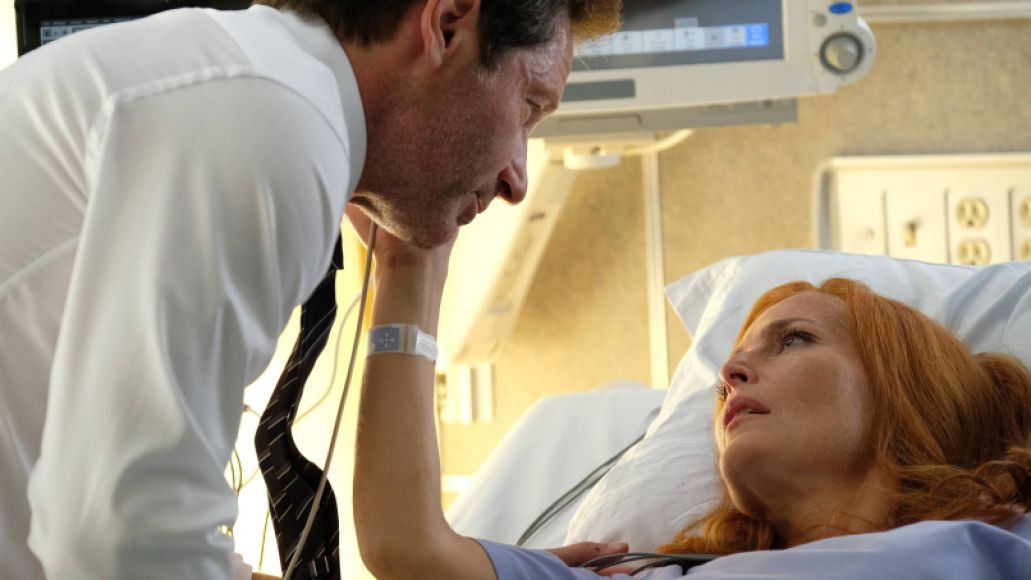 Sadly, that hasn’t really changed. Since then, Carter has only gotten progressively worse, as evidenced by his work on 2008’s instantly forgettable I Want to Believe, 2016’s mostly awful Season 10, and this year’s similarly problematic Season 11. Today he’s less Serling and more Lucas, a sci-fi genius of brazen mediocrity, delivering lazy scripts with overwritten expository dialogue and ham-fisted political rhetoric. His “My Struggle” trilogy — thus far, there are three chapters to this mess — are inarguably the lowest points of the show, perhaps only rivaled by his Season 10 charmer “Babylon”, which may or may not be the most frustrating way to listen to The Lumineers. And whereas he once allowed for economy in his writing, whether it was pairing up with Frank Spotnitz or Vince Gilligan or even Duchovny, he has now taken up the mantle entirely by himself. This warped sense of control also extends to behind the camera, where he’s also dulled creatively, forgetting any of the atmosphere and pacing that made the series so iconic.

Of course, it doesn’t help that Carter dug himself and the series into a dark grave with last season’s finale, “My Struggle II”. Coming off the heels of the aforementioned “Babylon”, Carter doubled down on his creative losing streak by going all-in on the much-hyped alien invasion narrative, squeezing one ludicrous detail after another into 43 minutes of tantalizing stupidity. It was seemingly the death knell of the series, which is why, not surprisingly, its followup, “My Struggle III”, plays the Dallas card and makes it all a part of Scully’s latest vision. (Mind you, we saw countless scenes that involved multiple point of views, which already punctures crater-sized holes in this narrative, but whatever.) It’s an eye-rolling move made even more aggravating by the fact that Carter fumbles the whole thing once again, delivering a frenzied and emotionless episode that essentially boils down to: “Mustang ad” + “William B. Davis monologue” + “ending of US Marshalls.” At multiple points, you have to remind yourself that this is actually The X-Files. 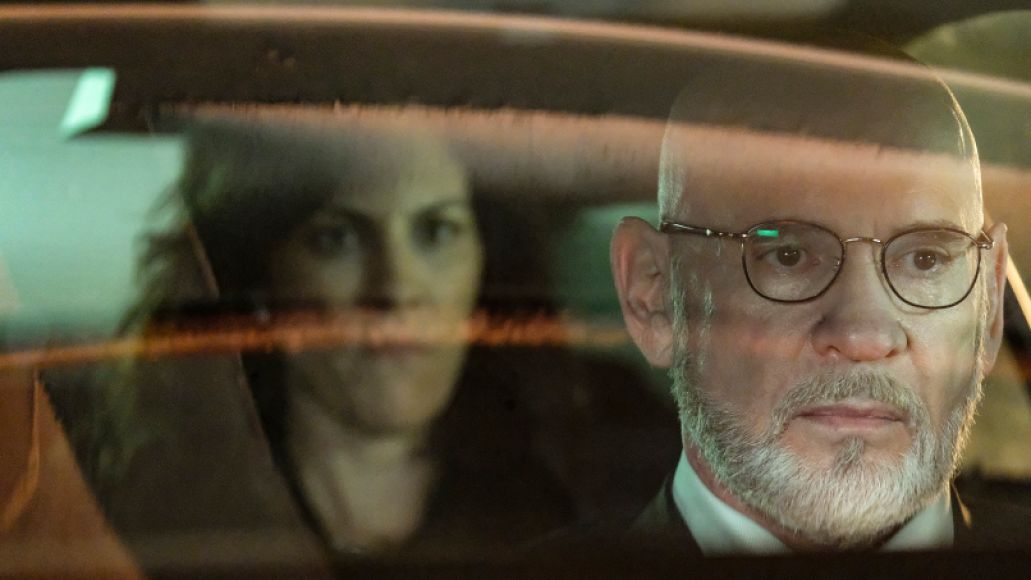 No kidding. These last two seasons are proof that the original parts don’t always fit in the long run. With Carter’s recent spate of episodes, you get the feeling that something is missing at nearly every facet. If it’s not the dialogue, it’s the pacing. If it’s not the atmosphere, it’s the set design. If it’s not the lightning, it’s the natural lighting. It’s like that great haiku moment from Wayne’s World: This is The X-Files, but … this isn’t really The X-Files. Gone is the unsettling mood. Gone is the feeling of terror. Gone is the notion of a lived-in world. Sure, they’re filming back in Vancouver, British Columbia, an area that has long been emblematic of the show’s Twin Peaks-esque look, but what good is a setting when it’s being completely wasted by mediocre direction. Where is Rob Bowman? Where is David Nutter? Where are the eyes that set the tone for the series? It’s really upsetting, especially when this show used to look like it was modeled off of The Silence of the Lambs or All the President’s Men, and now looks like another CSI knock off.

Again, this all goes back to Carter. His reluctance to hand over the mythology episodes to anyone but himself has directly affected the series as a whole in more subtle ways than we’re apt to notice. After all, it was the mythology arc that created the world of The X-Files, expanding the action far beyond the walls of the FBI offices and into places as far reaching as the Russian wilderness. It was in these episodes that the world became more nuanced, thanks to the inclusion of colorful characters like Alex Krycek, or Cassandra Spender, or Marita Covarrubias. These faces embellished this series in ways that the Monster-of-the-Week episodes couldn’t, if only because they were destined to return. Both their respective narratives and their on-again, off-again relationships with Mulder and Scully added a depth to this series that goes beyond aesthetic. That’s what’s been missing these past two seasons — hell, even the second movie — and every familiar face now exists to serve as little more than a chess piece of exposition. 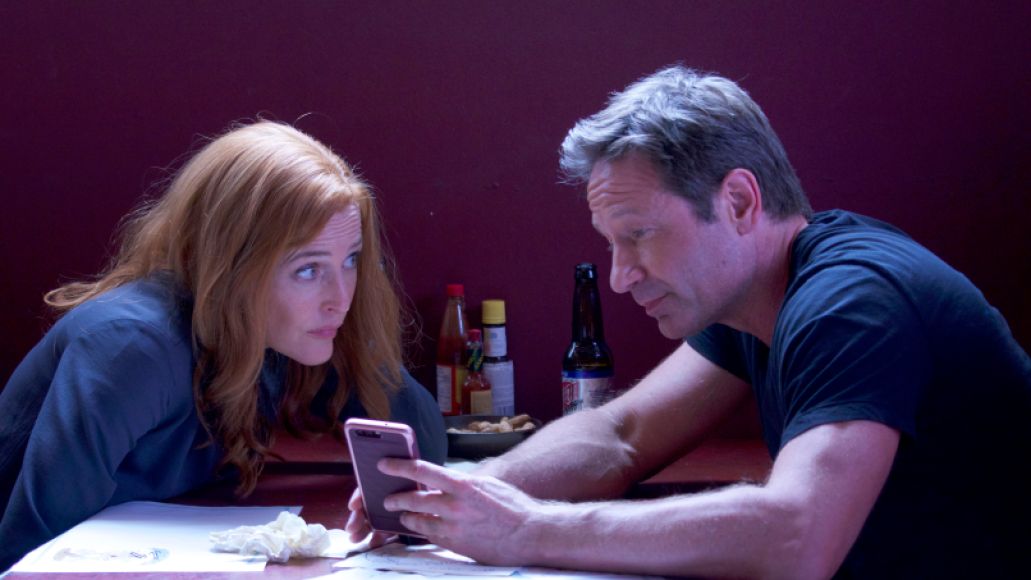 It’s just baffling that the same guy who once wrote “Duane Berry”, “Irresistible”, “Paper Clip”, and “The Post-Modern Prometheus” could walk away from scripts as bad these. It’s not like he didn’t have all the time in the world, either. For over a decade, and long before Fox expressed any interest in moving forward with either a movie or another season, Carter had campaigned for another go-around, professing how he knows exactly where he wants to take the franchise and where it might end. There was reason to be alarmed with I Want to Believe, but seeing how it wasn’t a mythology episode, some admittedly shrugged it off as being a story he wasn’t as interested in telling. But that’s the thing, this new mythology story does have that energy, only it’s rattled, unfocused, and cluttered with intriguing ideas that don’t exactly add up. Again, he’s fallen into the same camp as George Lucas, a guy with ideas but no conscious way to execute them, and while that’s sad and tragic, it also doesn’t have to be the only option.

The X-Files is still a great show in capable hands. Although Carter has lost his edge, veterans like Darin Morgan, Glen Morgan, or James Wong certainly haven’t, and the three have done their best over the past two seasons at proving there’s still a half-life to this show. Darin Morgan’s “Mulder and Scully Meet the Were-Monster” was the sole highlight of the 10th season — in fact, one of the series’ best for some fans — and he returns with yet another gem this year in “The Lost Art of Forehead Sweat”, centering a whole episode around the recently popular Mandela effect. Glen Morgan’s “This” is about on equal footing with last season’s good-not-great “Home Again”. And finally, Wong gets super emotional with “Ghouli”, improving upon his average Monster-of-the-Week episode for Season 10, “Founder’s Mutation”, with what is essentially a mythology episode in disguise. It should come as a relief to anyone who still wants to see the alien narrative go in ways and directions that feel organic to the original series. 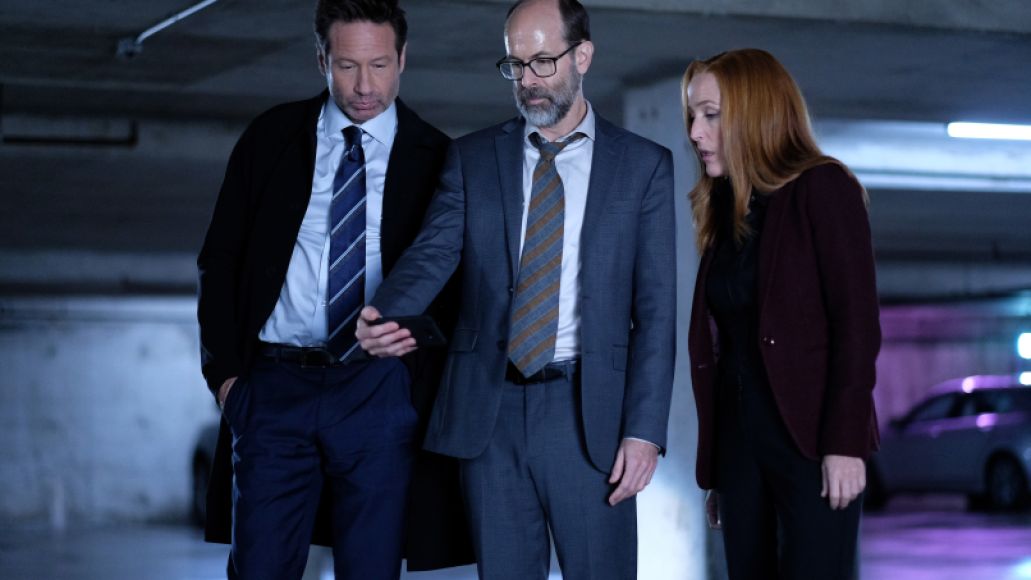 That’s not to say Carter should be entirely out of the picture — not at all. To his credit, he does take a surprising left turn for the better with the Monster-of-the-Week entry, “Plus One”, which he only wrote (leaving the direction for a much more capable Kevin Hooks). While it’s not exactly a stellar episode, and seems a tad unhinged, even with its own built-in logic, it does have its share of genuine moments. Among them is a nighttime exchange between Mulder and Scully, who reflect upon their own duality in life, and what actually defines them. It’s meditative, it’s smart, and above all, it brings out the best in the two stars. You can tell they actually relate to the words they’re saying as opposed to just delivering them with sterile expressions. Still, it’s a brief respite in a barrage of unforgettable carnage, and evidence that Carter works best in small dosages these days. But that’s fine! He’s written over 70 episodes for the series! That’s more than anyone should ever have to write, and he should know that.

He just needs to not take his own advice and trust someone.

Line of the Night: “William’s my only son.” Ouch. Looks like we need to get Maury Povich involved.

MVP: Gillian Anderson, for making any of the nonsense in “My Struggle III” work. It’s no wonder she wants to exit stage left and close the case files for good. Carter’s pretzeled narrative for Dana Scully is a long, bad Aristocrats joke now.

The Truth is Still Out There: So, not only do we have to buy the fact that the Cigarette Smoking Man has done all these things by his lonesome, but now there’s a new, fractured syndicate that wants to move up to a remote space station while the aliens invade and destroy Earth? When did this become Elysium? Good lord.

Up Next on TV Party: Andrew Bloom heads to The Good Place, which returns on Thursday night to close out its fantastic second season. What Ted Danson will do next is anyone’s guess.

The X-Files Returns with the Same Chris Carter Problem