You could be forgiven for getting whiplash from the on-again, off-again romance between Tina Belcher (Dan Mintz), Bob’s Burgers’ resident love-struck tween, and Jimmy Jr. (H. Jon Benjamin), her longstanding crush. The show’s featured each one pursuing the other; it’s had them alternatively dating and feuding, and it’s even shown them pulling off wild stunts to impress the other, without ever really settling on a consistent level of interest, as befits the messy world of middle-school romance.

But “V for Valentine-detta” casts Tina as the crestfallen, jilted party when Jimmy Jr. not only asks her new rival, Becky, to be his Valentine instead of Tina, but then twists the knife by putting Betty’s picture in a special V-Day frame that Tina made for him. The Belcher women try to cheer Tina up with a night on the town, but the effort naturally devolves into a revenge plot instead. The Belchers’ special Valentine’s Day limo driver, Nat, equips Tina with a set of stink bombs, and they send her out to ruin Jimmy and Becky’s fancy dinner using the stench of vengeance.

And yet, when it comes time to do the deed, Tina can’t bring herself to do it. She has a moment of clarity and maturity, realizing that Becky isn’t her enemy. All Becky did was go on a date with “Wagstaff’s bad boy,” something that (at least in Tina’s mind) anyone in her place would have done. The oldest Belcher kid accepts that Becky never did anything to intentionally hurt her and decides that it’d be unfair of her to take her hurt out on an innocent party. 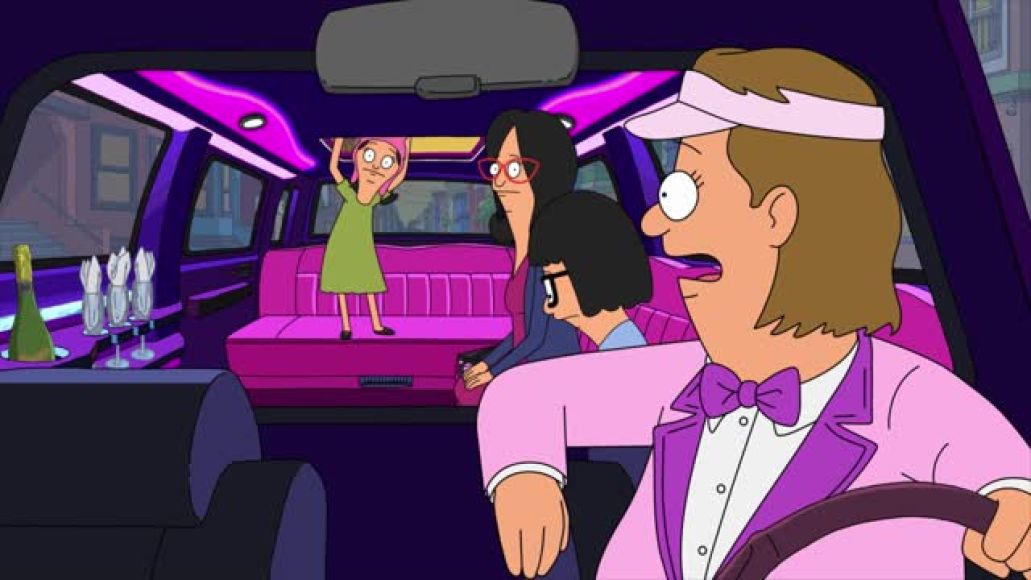 Instead, Tina invites Becky to join the Belchers in their limo ride around town. The offer is particularly inviting after Jimmy Jr. uses this interruption to break up with Becky (something she admits she should have anticipated after he showed up three hours late and called her “Betsy”), revealing that maybe it’s Jimmy Jr.’s flightiness and flakiness that’s causing all that romantic whiplash.

It’s a major decision for Tina, one where she has the opportunity to exact revenge on the source of her pain and instead reaches an epiphany about the cause of it, finding comfort in sisterhood instead of in stink bombs. We can expect Bob’s Burgers to return to the Jimmy Jr. well again sometime soon, but for one episode, it’s nice to have Tina find her happiness in her family and new friends, rather than in a beau whose affections are as shaky as his dance moves.

Line of the Week: When Bob is about to leap from a trapeze, his trainer offers a simple reassurance. “I know. It’s a long way down. But if you fall, this harness thing will catch you no problem. Nobody’s died on this. Well, except for one guy, but that was ‘cause someone dropped a sword out of a hot air balloon. Totally unrelated. We weren’t liable.” Comforting!

MVP: Let’s give it up for Jillian Bell as Nat the limo driver. It takes a lot to stand out as an oddball among the Belcher clan, but Nat was strangely resourceful and game for anything (assuming you waive your right to sue her for decapitation), and Bell completely sold it.

Burger of the Day: For Valentine’s Day, Bob is serving up the “Shut Up and Swiss Me Burger.” No word on whether the slices of Swiss cheese are heart-shaped.

Up Next on TV Party: Tomorrow night is the series premiere of Black Lightning, the new D.C. Comics TV show starring Cress Williams. Join our own resident superhero, Clint Worthington, as he bolts into the Arrowverse’s latest outpost.