Like many Trek series before it, Discovery’s first season has been a mish-mash of ideas, concepts and tones, the show struggling more than most of its brethren to find its place in the franchise’s vaunted legacy. At once an attempt to update the franchise to the sensibilities of modern TV (a darker tone, serialized storylines, morally complicated characters) and a show paying lip service to Trek’s peppier history (Harry Mudd, the Mirror Universe), Discovery is the biggest departure from the universe we’ve seen since the Abrams films.

The first half (or chapter) for Discovery did the show no favors, immediately thrusting Trekkies into an unfamiliar world of pre-TOS Klingon redesigns and ethically compromised protagonists that seemed a far cry from the utopian Starfleet Gene Roddenberry envisioned. And yet, the second half has shown glimmers of potential, with its ensemble settling into a more confident rapport and delving into deeper thematic material.

As we look over Discovery’s messy, beautiful experiment thus far, there are quite a few highlights — and more than one lowlight — to keep us optimistic for whatever strange new worlds and new civilizations the second season might give us.

If there’s one episode that made Discovery watchers heave a collective sigh, relieved that the show has the ability to actually feel like Star Trek, it’s episode seven, “Magic to Make The Sanest Man Go Mad.” A welcome break from the dreary moralizing of Sonequa Martin-Green’s Michael Burnham, or the grumpy sociopathy of Capt. Lorca (Jason Isaacs), “Magic” presents a quirky, inventive time-loop episode of a type we haven’t seen since the TOS days.

Rainn Wilson is still a hoot as Harry Mudd, but the real treat is actually watching the Discovery crew behave like a team. Tyler (Shazad Latif) and Burnham show glimmers of their electric chemistry, and Stamets’ brusqueness is delightful to watch. For a show concerned with ongoing storylines and putting its characters through their moral paces, “Magic” showed that our motley crew of pouty sociopaths had it in them to let loose and give good Trek. –Clint Worthington

“Si Vis Pacem, Para Bellum”, which literally translates to “If you want peace, you should prepare for war,” and more figuratively translates to “The one where Saru was possessed by a sentient swarm of nigh-magical bacteria.” Though the lowlight of Discovery’s first season, the episode has its moments. When the typically meek Saru (Doug Jones) turned threatening, it was rightfully scary, and L’Rell’s (Mary Chieffo) efforts to defect were intriguing, if a bit confusing in their depiction.

But the problem is that “Si Vis Pacem” is a muddle that jumps from bacteria-related adventures on Pavoh, to Admiral Cornwell’s (Jayne Brook) escapades with the Klingons, to check-ins with a handful of other stories, with little sense of unity or cohesion. The episode tries hard to establish a connection between Burnham and Tyler via clunky dialogue, and goes for a combination of formula and innovation without ever finding a good balance. –Andrew Bloom 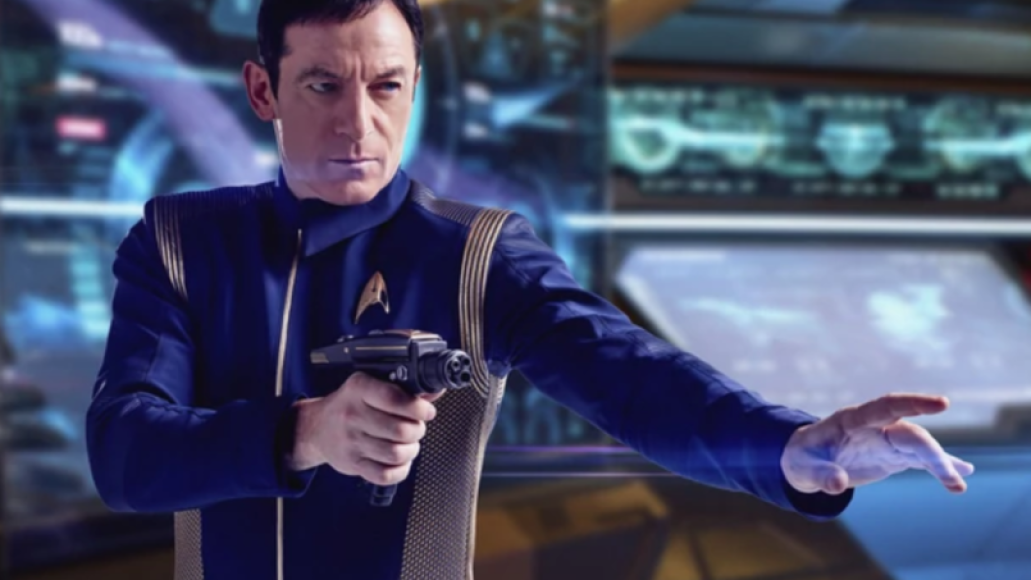 Jason Isaacs as Captain Gabriel Lorca. While there were plenty of superb performances in Discovery’s first season, Isaacs’ stands out for its degree of difficulty. His Lorca had to walk the line between seeming like an officer who’d suffered a major trauma and was left believing that rules must bent or broken in a time of war, and also like a Mirror Universe double straining to keep his naturally-malevolent philosophy stuffed into a Starfleet mold.

Isaacs managed that difficult task with flying colors, making Lorca alternatively sympathetic, damaged, monstrous, and even funny, to where when his true nature was revealed, all the actions and reactions the audience had seen from Lorca up to that point still felt true to the character as we’d come to know him. Isaacs gave a layered performance that vindicated both Lorca’s false identity and the complexity beneath it. -Andrew Bloom

Context Is For Kings 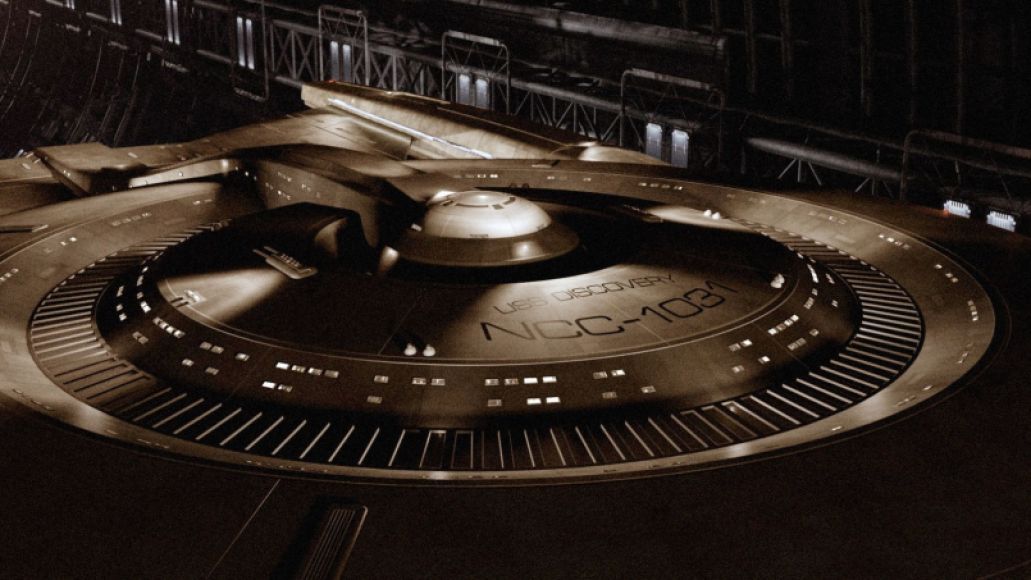 One of Discovery’s biggest points of controversy is its – how do we put this? – casual relationship with Trek’s otherwise complicated continuity. The showrunners have playing fast and loose with a lot of Trekkies’ most sacred cows (Starfleet’s ethos, Klingons) and the results have been mixed.

That being said, the show is unafraid to make in-universe connections to the older shows and films. Enterprise gets a lot of love, right down to a namedrop in the season’s penultimate episode, and the extended Mirror Universe arc is a lovely homage to the parallel worlds visited in not one, but three other Trek shows. The use of Sarek (James Frain) as a recurring character is further evidence of the show’s intermittent affection for its universe.

There are still some burning questions as fans try to fit Discovery into the mold of Trek’s convoluted canon. Is the spore drive doomed to failure since we never see it again? Why did Spock never talk about his adoptive human sister in the original series? It’s hard to tell whether or not Discovery is interested in ever answering those questions, or whether we should just relax and enjoy the ride. -Clint Worthington 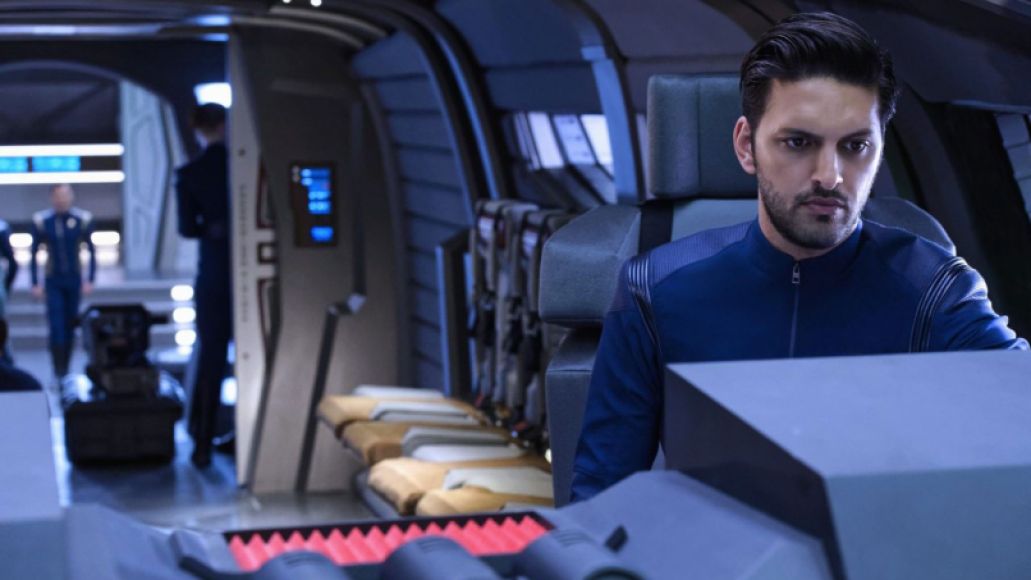 The biggest impression one gets when looking through Discovery’s messy story arcs is the internal tug of war between departing showrunner Bryan Fuller and current heads Gretchen J. Berg and Aaron Harberts, who seemingly have different, less challenging ideas for the series.

One of those is the show’s most ambitious — and obvious — twist: that Lieutenant Ash Tyler, freed Klingon prisoner and Burnham’s love interest, is actually a Klingon sleeper spy — the albino fanatic Voq, who conveniently disappeared right before we were introduced to Tyler on a Klingon ship. Real clever, Fuller. We never saw that coming.

Even after waiting what seemed like ages for the show to finally reveal what we saw coming for the whole season, Discovery still doesn’t know what to do with him. Just one episode after revealing Voq’s personality, L’Rell performs a Klingon ritual that kills the Klingon side of him, turning Ash/Voq into a new man who has no real role on the ship — or with Burnham.

The season finale offers a surprisingly fitting end to Ash/Voq, but it’s entirely possible they could bring him back in the right context. -Clint Worthington 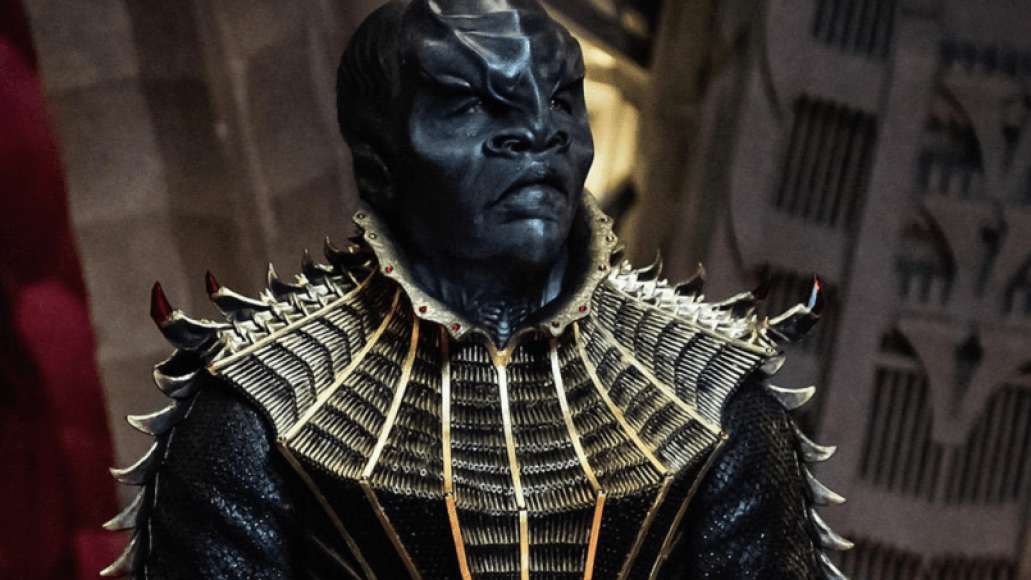 Discovery’s Klingons are different. Gone are the flowing locks, the intense facial hair, and the revelrous spirit. In their place are Klingons who feel more alien and othered, something that fits the season’s use of our Alpha Quadrant neighbors as a focal point for its exploration of xenophobia.

That sort of radical change in presentation goes back as far as 1979, when Star Trek first jumped to the silver screen and Klingons went from being ruddy-faced humanoids to the more familiar ridged roughians like Worf. Now their look and bearing has shifted again, with Discovery’s Klingons resembling orcs from Lord of the Rings and barking standard, subtitled bad guy banalities.

That shift is an adjustment, albeit one that helps renew the Klingons as unknown outsiders instead of familiar, semi-friendly faces, which serves the purposes of this season’s themes. But it also genericized the Klingons, making them undifferentiated antagonists with only the patina of “honor” to give them any flavor, rather than maintaining the distinctiveness the species sported in prior works. –Andrew Bloom 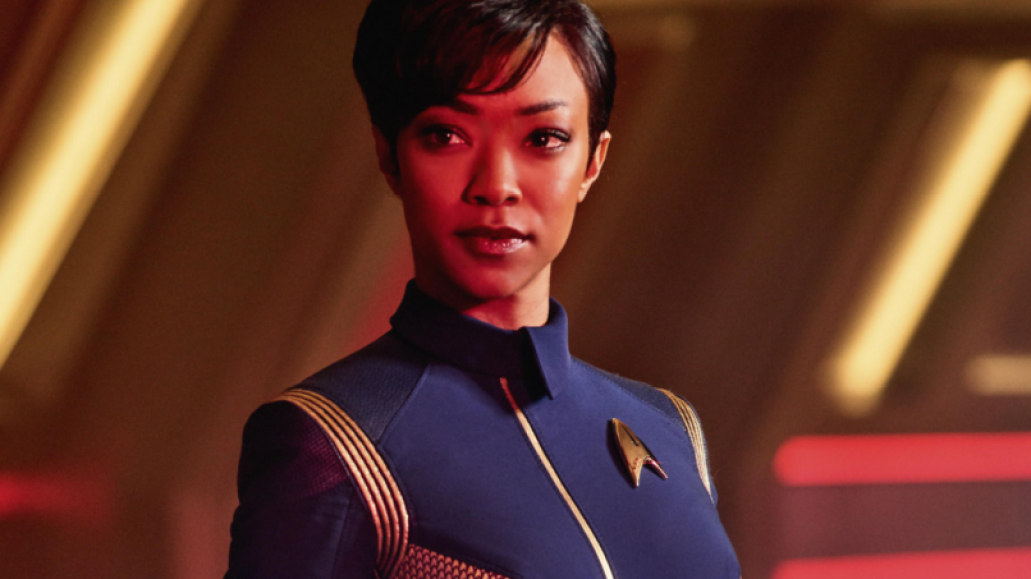 Despite a return to Star Trek’s “Prime Universe”, much of Discovery takes its cues from the J.J. Abrams films, with ultra-modern tech, CGI-filled skirmishes, and only a darker hue to distinguish them. At the same time, Discovery is as much aping the prestige genre shows it’s hoping to compete with as it is mining Star Trek’s past.

Like Game of Thrones, Discovery has peppered this season with surprise resurrections, unexpected betrayals, and shocking twists to make major episodes seem like game-changing events. As the casting of Sonequa Martin-Green suggested, there’s also bits of The Walking Dead present, from bouts of overwritten dialogue meant to deliver a particular episode’s message to similarities in how the season was structured.

Last but not least, Discovery also borrowed a few elements from the new-ish version of Battlestar Galactica (a Star Trek cousin) between its paranoia of double identities and its approach to processing current events with realistic sci-fi trappings. Discovery is a mesh of influences, many of which stretch beyond the show’s intra-franchise predecessors. –Andrew Bloom

A quick-and-dirty wrapup to the messy Klingon War story arc, “Will You Take My Hand?” is a relative success, given all the balls it has to keep in the air. Closing out the Klingon War is no small feat, but they manage to just pull it off, along with some interesting character moments for Sylvia Tilly (Mary Wiseman), Tyler, and Emperor Georgiou (whose rogue status at the end of the season leaves Discovery open for some delicious return visits).

But at its core, the finale was an all-out showcase for Martin-Green, the actress and writers working overtime to connect the seemingly contradictory sides of Burnham’s personality we’ve seen into something consistent and magnetic. Turns out her struggle to fit in aboard the Discovery, paying penance for her crimes at the Battle of the Binary Stars, was all prelude to the character’s pivotal moment in the finale. It’s all a bit speechy, but the show’s decision to save the soul of Starfleet through Burnham’s principled stand for peace sends the show in the right direction for future seasons.

The end-of-season cliffhanger is a bit cheap, but it’s worth it to see the show’s relatively faithful recreation of the Enterprise, with small changes to reflect Trek’s moody new aesthetic. –Clint Worthington 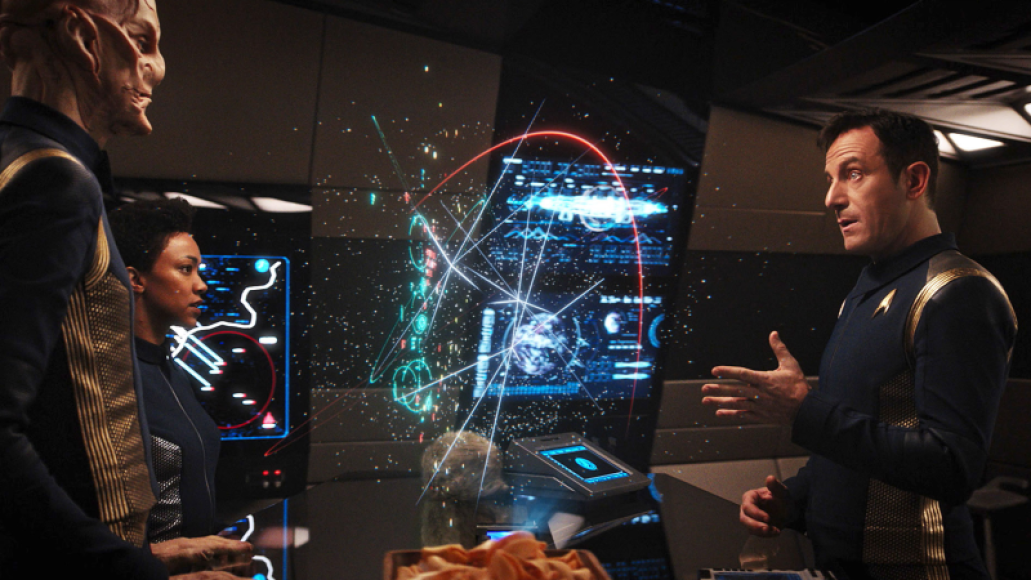 In Discovery’s first season, the show both is and isn’t Star Trek. It uses science fiction as an avenue for political and social commentary. It firmly roots its adventures in its characters. And it commits (however selectively) to the universe established by its forebears, and more importantly, to the ideals those series espoused and explored.

But adapting those concepts and elements into the framework of modern prestige television does not always make for an easy fit. Too often, Discovery goes for the big speech or the status quo-shattering twist to the point that these choices lose their impact, and its noble attempts to meld theme and story can leave each feeling too heavily signposted.

Still, Discovery ends its first season having earned the Star Trek prefix in its title. The show feels much as it did after its season premiere — as a series with more potential than proof — but also one with nigh-limitless, intriguing possibilities ahead of it. With Discovery’s first season, the franchise returns to the medium from whence it came more than half a century ago, with a renewed vision of the future, and of the present. —Andrew Bloom

Want to stay tuned in? Subscribe to TV Party, Consequence of Sound‘s official TV podcast! Every week, Allison Shoemaker and Clint Worthington take you through the week’s world of TV, along with a rotating cast of writers, critics, and all-around televisual savants.