Back in 2005, Reprise released the Grammy- and Oscar-winning soundtracks to each of the Lord of the Rings films as CD box sets. Now, 13 years later, vinyl pressings of the OSTs will be available for the first time through Rhino Records.

The new series kicks off with a The Lord of the Rings: The Fellowship of the Ring box set, due out April 6th. The five-LP collection features red vinyl housed in a “red leather style spine” box. Also included is a map of Middle Earth and a booklet featuring new and extensive linear notes from author Doug Adams. Limited to just 5,000 copies, the set retails for $119.98 (pre-orders are ongoing here). A three-CD, 1-Blu-ray “reactivation” of the original 2005 box set will also be available for $79.98.

Composer and conductor Howard Shore wrote the score to all three LotR films, which collectively earned him three Oscars, two Golden Globes, and three Grammy Awards. He recorded the music for The Fellowship primarily with the London Philharmonic Orchestra, as well as with the New Zealand Symphony Orchestra, the London Voices and the London Oratory School Schola. Enya also contributed two original songs to the OST, “May It Be” and “Aníron (Theme for Aragorn and Arwen)”, both of which are included on the reissue.

Vinyl box sets for the other two scores — The Two Towers and The Return of the King — will be announced in the near future. For now, check out the tracklist for the vinyl Fellowship of the Rings collection and take a gander at the CD set.

In related news, Amazon recently acquired the rights to The Lord of The Rings with plans for a new multi-season television adaptation. 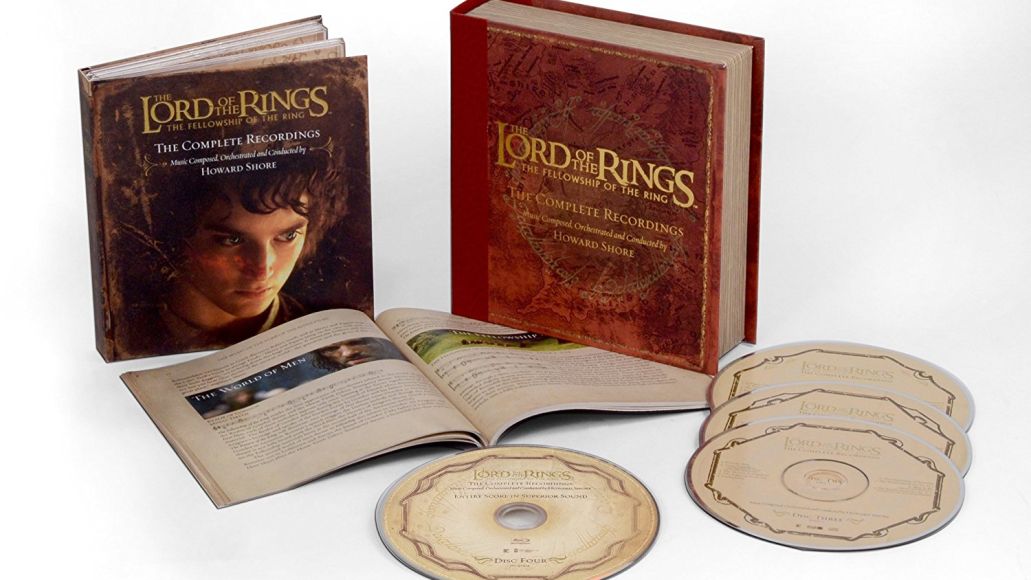 The Lord of the Rings: The Fellowship of the Rings: The Complete Collection Box Set Tracklist:
LP 1
Side A
01. Prologue: One Ring to Rule Them All
02. The Shire
03. Bag End
04. Very Old Friends
05. Flaming Red hair

Side B
01. Farewell Dear Bilbo
02. Keep It Secret, Keep It Safe
03. A Conspiracy Unmasked
04. Three Is Company

LP 3
Side E
01. The Council of Elrond Assembles Featuring “Aníron (Theme for Aragorn and Arwen)” Composed & performed by Enya
02. The Great Eye
03. Gilraen’s Memorial
04. The Pass of Caradhras

Side H
01. The Mirror of Galadriel
02. The Fighting Uruk-hai