For seven years, Workaholics was one of Comedy Central’s raunchiest, funniest, most oddly dated comedies, with stars/co-creators Anders Holm, Adam Devine, and Blake Anderson cultivating a uniquely clever spin on the kind of gross-out bro humor that dominated pop culture in the early aughts. Unlike the unironic celebrations of stupidity and misogyny that permeated shows and films like Jackass and Van Wilder, the “Dew Crew” of Workaholics made it work by saddling those characters in an equally-cartoonish world that matched – and criticized – their frat-boy stoner antics.

Now, like their contemporaries Key & Peele in 2016 with the surprisingly solid Keanu, the boys have made their own action-tinged feature film debut. Unfortunately, Game Over, Man! sacrifices all the brusque cleverness of their hit show for a warmed-over Die Hard parody that’s too self-indulgent to entertain anyone but the four goofballs who made it.

Here, the Workaholics aren’t underachieving telemarketers, but a trio of hotel housekeepers, Darryl (Holm), Alexxx (Devine), and Joel (Anderson). Their inhibitions are as low as their aspirations; their dream is to fully fund a bizarre video game peripheral called the Skintendo Joysuit. On the night when they plan to ambush their favorite Instagram star, Bay Awadi (Utkarsh Ambudkar,The Mindy Project), with their pitch at a star-studded penthouse party, the hotel is sealed off and attacked by a squad of black-clad terrorists (led by Neal McDonough and Rhona Mitra). Having escaped capture, the trio decide to take matters into their own hands, John McClane-style.

Right away, Game Over, Man! reveals its central problem: by this point, Die Hard parodies are about as played out as earnest Die Hard homages. The entire concept feels like the product of a weed-heavy pitch meeting, and the literalism of the “Die-Hard-but-with-idiots” structure reveals this corresponding lack of invention. Hostages are held captive in a spacious penthouse by tall thugs with machine guns; the villain is a mincing aesthete in a well-fitted suit (McDonough, with the same smirking camp he puts to better use on DC’s Legends of Tomorrow). The terrorists’ computer hacker (Veep’s Sam Richardson) even cracks a joke about how he isn’t “the black nerd from Die Hard.”

Game Over, Man! offers little spin on the classic film’s conceit, feeling instead like a flimsy excuse for Holm et al. to just … do Die Hard. (It should also be pointed out that Workaholics’ third episode, “Office Campout,” is a much cleverer spin on the John McTiernan actioner than this movie.)

Another thing missing from Game Over, Man! is the essential sweetness of Workaholics’ characters: their drugged-out dopiness was usually mitigated by their do-or-die affection for each other, and the stakes were hardly ever this life-threatening. Here the trio are lazy, mean-spirited bullies who, once they realize they’re in a Die Hard situation, take far too much glee in dispatching bad guys (usually by accident). Devine is especially guilty of this, his squealing loudmouth sucking the oxygen out of the room in more than one scene as he complains that he hasn’t “gotten a kill yet.” Transplanting such oblivious dopes from TelAmeriCorp to a life-or-death hostage situation removes the charm from their antics, turning them into irresponsible psychopaths.

But what’s far more worrisome is the wealth of homophobia underpinning most of the bigger jokes in Game Over, Man!, its sensibilities rooted firmly in a bygone era where the mere existence of a gay person in your film was the punchline to a comic setpiece. One particularly baffling action scene manages to combine a faked death using simulated autoerotic asphyxiation (spoiler: you will find out what one of the Workaholics’ dongers looks like), which leads to an abrupt sex scene between two henchmen. Meanwhile, there’s an extended gag (emphasis on the gag) where Ambudkar’s character is forced to toss a hirsute hostage’s salad. It’s almost the opposite of gay panic: mining jokes from a straight person’s idea of how fun, cool, and crazy gay people’s sex lives must be, which manages to be every bit as distasteful in an entirely different way.

At all turns, Game Over, Man! is a cynical vehicle for the kind of outdated humor that fell out of style more than a decade ago. Rather than use the Die Hard trappings for anything inventive, the Dew Crew waste their Netflix movie deal on a chaotic series of offensive jokes vaguely strung together by surface level homage. After more than a decade of working together, Holm, Devine and Anderson’s chemistry is assured and energetic, but that’s not nearly enough to wallpaper over the odious, unfunny things they have to say and do. As feature-film vehicles for popular TV comedy teams, it’s no Keanu by any stretch of the imagination. 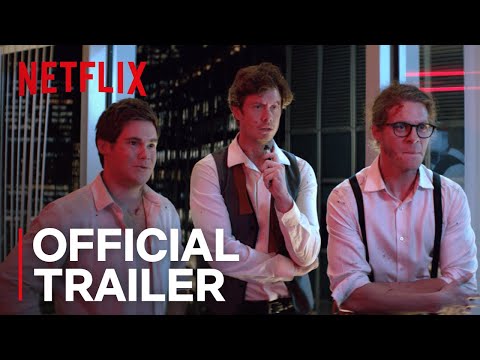 Film Review: Game Over, Man! Treads Over Too Much Well-Worn Comic Territory