After a winter-long hibernation, Top Songs of the Month returns on the final Friday of each month to share the songs that we just haven’t been able to shake over the last 30 days. And trust us, March kept our earbuds swamped. Legends returned, the biggest names in rock and roll had something new to say, fresh faces further carved out space for themselves, and hot acts dropped tracks that’ll no doubt still be bumping in our heads come warmer weather.

With the release of Firepower bringing Judas Priest’s album count up to a whopping 18, the English heavy metal titans prove that they never lost their grip on their grit, and “Lightning Strike” makes for strong evidence. Brimming with a delectable darkness and raw power, the lead single hits the ear hard and heavy. This results in the track taking on an effortlessly epic life of its own, which is exactly what makes it the ultimate rock and roll cocktail that will keep listeners coming back for round after round. –Lindsay Teske

Release: From Lush, available 6/8 on Matador

The first single off of upcoming June album Lush, Snail Mail’s Lindsey Jordan tells an insightful, honest story of teen isolation and angst in lilting ballad “Pristine” with straightforward yet poetic lyrics. Jordan’s youthful voice is supported by her trademark punk-inflected yet soft guitar, questioning those who keep her down with queries like “Don’t you like me for me?” and discovering that she loves herself and “Won’t love anyone else”. –Clara Scott

Soccer Mommy has proved a smash hit on the indie circuit with her debut album, Clean, a collection of rock ballads and jams that weave interesting stories between catchy guitar-based hooks. “Cool”, the second single from the record, carries its power in the narrative of female badassery sung dreamily by the outfit’s creator, Sophie Allison, telling the story of a man-eating cool-girl while maintaining a danceable chorus. –Clara Scott

Jack White has successfully concocted a masterful melting pot of scuzz and style in “Over and Over and Over”. The standout track from his third solo album, Boarding House Reach, finds its strength in its exploratory nature. The cool and cohesive mashup of textures and tones boldly diversifies White’s existing body of work, yet still makes way for his signature sonic flair to shine through. “Over and Over and Over” was a creative gamble, and White rolled his dice and won big. –Lindsay Teske

Release: From Father of Asahd, available April 2018 on We the Best

Features are a catch-22 proposition in hip-hop. Going it alone isn’t in the genre’s DNA, but roll with too many others and those guests can be seen as crutches. And then you have former Terror Squad member DJ Khaled, the anomalous hit-maker whose success stems from knowing exactly who to write with, tap as producer, and pass the mic to, and rarely, if ever, has the hip-hop chess master had better pieces to maneuver than on “Top Off”. With features from Jay-Z, Future, and Beyoncé, the top may just stay off that Maybach for the rest of 2018. –Matt Melis

Release: From Tell Me How You Really Feel, available 5/18 on Mom+Pop

Indie favorite Courtney Barnett has released the second single, “Need a Little Time”, from her upcoming May album, Tell Me How You Really Feel, a laid-back pop rock track in which Barnett ruminates on vulnerability. The tune is accompanied by a spacey video directed by Danny Cohen, where Barnett floats through space and time after being probed by aliens. –Clara Scott

The grass (lawn or pot) is always greener elsewhere. Comic rapper Lil Dicky finds he gets less respect than Rodney Dangerfield as a white rapper with no dance moves, no tats, and limited junk in his front. Meanwhile, Chris Brown would give anything just to shake the harsh light of the media’s scrutiny for a single day. That’s the premise of Dicky’s latest single and video, “Freaky Friday”, which finds him swapping bodies with Brown. It’s pure silliness, of course, but with an addictive hook and hilarious observations like Brown noticing his dick now only “perches” and Dicky offhandedly realizing, damn, he’s got a kid, there’s a reason 60 million have clicked and re-clicked on the video over the last two weeks. Predictably, each is glad to be back in his own body by song’s end, though Dicky no doubt misses having cultural clearance to say “nigga.” –Matt Melis

Between “Bu$hleaguer”, “Army Reserve”, and “Jeremy”, Pearl Jam have never shied away from having their music illuminate the dark events unfolding on the world’s stage. “Can’t Deny Me”, their first release in five years, continues to do just that. The percussion-soaked protest song is peppered with poignant lyrics about a country poisoned and persevering in the face of societal apathy. The relevance to current events is strikingly noticeable, making “Can’t Deny Me” the ultimate hardcore catharsis the world didn’t know it needed. –Lindsay Teske 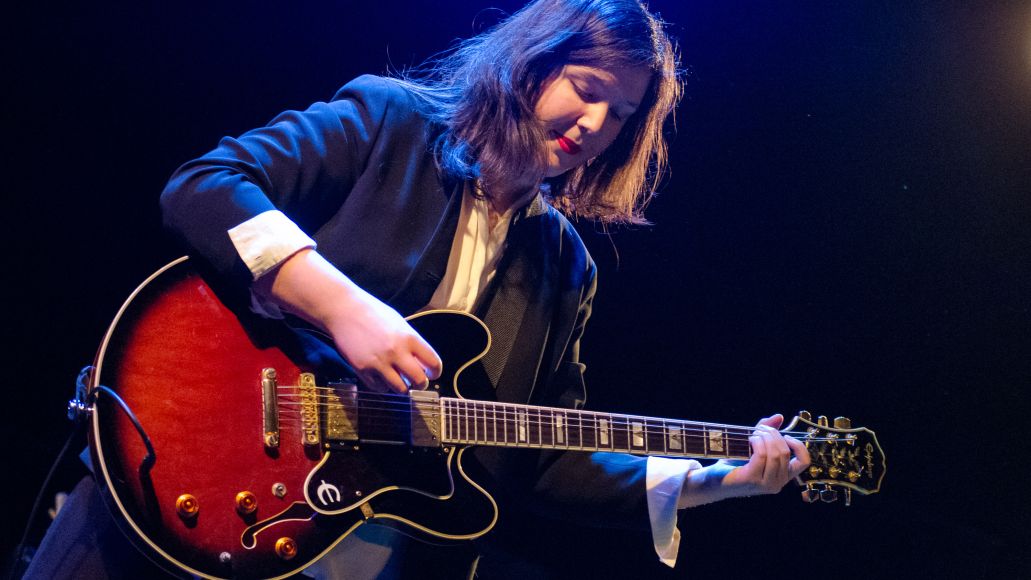 A slow reflection on broken romance, Lucy Dacus’ “Pillar of Truth” is a long, warm, and subtly moving ballad from her new album, Historian, released March 2nd on Matador Records. Dacus’ smooth and deeply soulful voice carries the song through each phase of momentous instrumentation, culminating in a triumphant reiteration of the chorus that echoes into a bare-bones ending, leaving Dacus’ voice alone to close the song. –Clara Scott

Release: From SR3MM, available god only knows when on EarDrummers

Brothers Swae Lee and Slim Jxmmi aka Rae Sremmurd are sitting on arguably the most anticipated hip-hop release of 2018, SR3MM, a goliath three-album affair that features the duo on one record and their respective solo debuts on the other two. No matter how you look at it, the stakes are huge, but an early sampling like “Powerglide” (with a little help from Juicy J) eases some of the pressure. With lyrics that make us say, “Huh?” and a groove that never brakes or becomes less addictive, we’ll be gliding all year long alongside this cut, whether or not the rest of SR3MM can match the hype. –Matt Melis