Freddie Mercury biopic Bohemian Rhapsody unveiled its first trailer during Fox’s presentation at CinemaCon this week, where star Rami Malek spoke about the challenges of playing the late rock god. The trailer has yet to arrive online, but the studio shared some striking pictures that are a definite step up from our last glimpse at Malek in character.

The first, which you’ll see above, finds Malek’s Mercury looking cool as ice with the singer’s signature ‘stasche and a sweet pair of aviator shades to complement his leather jacket. Alongside him is Gwilym Lee as lead guitarist Brian May.

The second photo, seen below, depicts the entire band onstage, standing before a massive stadium filled with fans. Based on the arena and Malek’s outfit, it’s presumably set at the band’s epic 1985 Live Aid performance, the recreation of which was previously captured in some fan-shot footage. 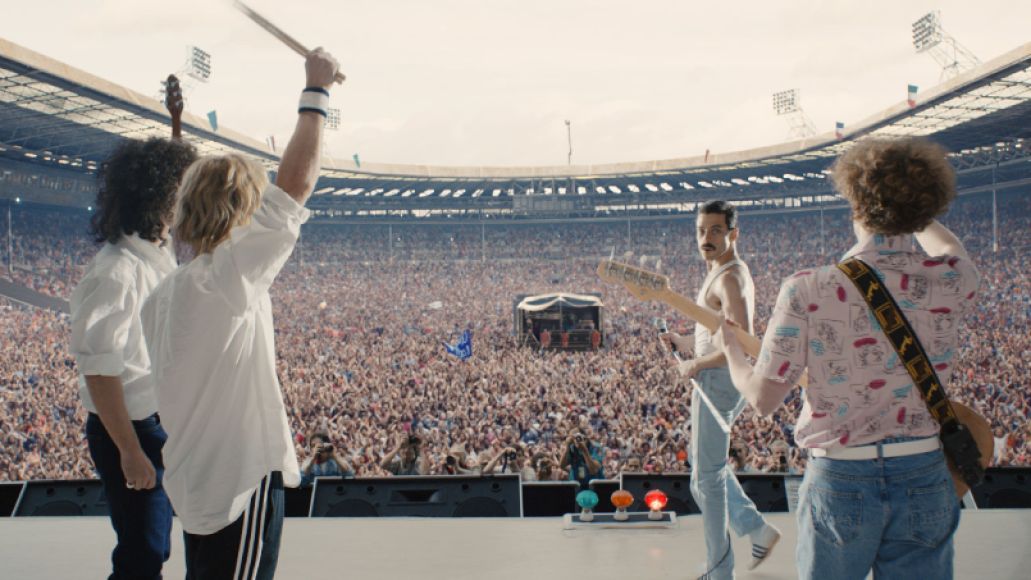 “When I got this role, I thought, ‘Oh my God, this could be a career-defining performance.’ And then two minutes later I thought, ‘This could be a career killer,'” Malek said during the event. Of Mercury, he added, “He gives everyone watching permission to embrace their imperfections and sing as loudly as they can,. That is what he did for me.”

Malek also revealed that May himself emailed the actor after seeing the movie to say it brought him to tears and that Mercury would be “proud” of it were he still with us.

The Hollywood Reporter has provided a breakdown of the trailer, which you can read below:

The trailer, which has not been released online, opens with Queen’s classic song “Bohemian Rhapsody” playing in the background, as a young Mercury asks to be the lead singer of a band. Retorts one of his future bandmates: “Not with those teeth, mate.” The rest of the trailer is made up of vignettes of Mercury and Queen discovering their sound — “If I go any higher, only dogs will hear it,” Mercury says — finding fame onstage and the singer being questioned about his personal life. The trailer ends with Mercury stepping out onstage at the iconic 1985 Live Aid concert, backed to a track of “We Are the Champions.”

Originally slated for a December 25th release date, Bohemian Rhapsody is now scheduled for release on November 2nd of this year. The bump is somewhat surprising, considering original director Bryan Singer was fired during production and replaced by Eddie the Eagle filmmaker Dexter Fletcher.