Last week, Morrissey sat down for an interview with his own website. The Smiths frontman decided to pass on other media outlets fearing his comments would be “misquoted” or taken out of context, as he’s alleged was the case in past interviews. Turns out it wasn’t the “misquoting” that was the problem for Morrissey — it’s his actual opinions that are highly problematic.

His latest interview was filled with troubling comments, some ranging from bigoted to downright racist. He claimed Hitler was Left Wing, nearly equated kosher and halal slaughterhouses with terrorists, and managed to mock London’s mayor, Sadiq, Khan, his for non-English accent.

It’s difficult to justify or defend such comments straight out of Morrissey’s mouth, but that’s what Mike Joyce, former drummer for The Smiths, has attempted to do in an awkward new interview on the weekly program Sam Delaney’s News Thing.

When asked about Morrissey’s racist views, Joyce claimed to have “never seen him have any kind of racism towards anyone ever.” He also attributed Morrissey’s controversial comments to the singer’s personality — “being outspoken” and always looking to bring “out the debates.” (He said Morrissey convinced him to be a vegetarian around the band’s Meat is Murder era.)

Joyce said he hasn’t spoken to Morrissey in “quite some time,” and that it’s possible his views have taken a turn for the worse since then, but he also suggests the media hasn’t treated him fairly by twisting and lifting his words out of context. “You’ll have to ask him [if he’s racist], not me,” Joyce often deflected, in attempt to stay neutral.

It’s at this point that host Sam Delaney brought out a game called “Is Morrissey Racist?”, which involved identifying racist Morrissey quotes. Joyce cringe-laughed at many of the quotes read aloud yet still managed to correctly attribute them to Morrissey. In one instance, he incorrectly attributed a racist quote to Moz when it was in fact said by racist British politician Nigel Farage (well, now we know how you really feel about your former band mate, Mike).

Watch the entire segment below. 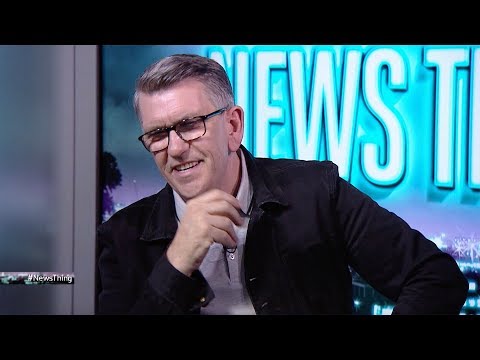