If you’d asked any self-respecting Arrested Development fan in 2005 how they’d feel about their favorite show releasing new content as far into the future as 2018, they’d probably offer the same openmouthed glee that Buster experiences upon his first taste of juice.

But here we are, living that reality, and it’s never seemed like a better time to put the Bluths to bed.

Between the less-than-warm reception given to Netflix’s fourth season in 2013 (five years ago!) and the allegations of sexual and verbal assault levied against Jeffrey Tambor that led to his firing from Amazon’s critical darling Transparent, it’s been harder to justify the show’s continued support from its ardent fan base. This is to say nothing of that recent cast interview in The New York Times, in which no one (except Jessica Walter and Alia Shawkat) comes out looking good — the male cast offering tense, mealy-mouthed excuses for Tambor’s beastly behavior towards Walter on set. Sure, Jason Bateman offered an apology the following day that could be generously described as “the least he could do,” but it’s still not a good look for the show as it airs the first half of its fifth season on May 29th.

But how does the new season hold up? To quote another weak-willed stooge from a hit Peak TV series: “Not great, Bob.”

To their mild credit, showrunner Mitchell Hurwitz and company seem eager to distance themselves from the disastrously received fourth season, serving up something that hews more closely to the structure of the old show. Whereas season four misguidedly tried to capitalize on the binge-watching nature of their new home on Netflix by crafting a Rashomon-style chronology where episodes focused on one Bluth at a time, season five is at least a mild return to the more accessible chronology of seasons past, the family facing problems together rather than going on their own journeys.

Try as they might to forget that 2013 happened, the show can’t quite manage to escape some of season four’s more tedious subplots – the missing Lucille 2 (Liza Minnelli), Gob’s tryst with Tony Wonder, Rebel Alley, Fakeblock. They’re mentioned in hushed whispers, a series of inconvenient hurdles the family (and show) try to smile their way past. Season five really, really wants to pretend none of that happened, but fails to completely shake all those dangling plot threads.

Instead, much of the first half seems funereal, the isolating nature of the fourth season changing the Bluths in ways that are difficult to come back from, even as schedules permit more of the cast to participate this time. There’s a permanent rift between George Michael (Michael Cera) and Michael (Bateman) since realizing they both dated Rebel Alley (Isla Fisher); George (Tambor) and Gob (Will Arnett) are emasculated after their separations from Lucille (Walter) and Tony Wonder (Ben Stiller), respectively. Sure, the Bluths have been objects of ridicule and pathos, but they’ve never seemed more abjectly sad and tired as they do in season five. It’s a straight-up bummer.

It’s not all a dirge, thankfully; without the density of season four’s time-hopping plot, the ensemble gets a bit more room to relax around each other, which is refreshing in fits and starts. Some of the players get some of their best gags of the series: Tobias’ (David Cross) unending quest to justify his place in the family (and his acting chops) by testing our poor imitations of the other Bluths is a solid recurring gag, and Lucille’s acid wit is as razor-sharp as ever. Maeby gets some of the best moments of the season as she dresses progressively older to get herself taken more seriously, resulting in a pitch-perfect Lucille-2 impression that’s as uncanny as it is hilarious.

Unfortunately, this doesn’t work with all the Bluths. While Arnett knocks it out of the park with Gob’s flailing, insecure overcompensation over Tony breaking his heart, it results in a Gob that feels more like Bojack Horseman than our favorite blustering magician. The cast members that weren’t as available get similarly short shrift – Portia de Rossi’s retirement from acting means she’s barely in the show, so Lindsey exists mostly in the background, and Tony Hale spends much of the first half of the season missing (though his performance as Buster hasn’t skipped a beat). 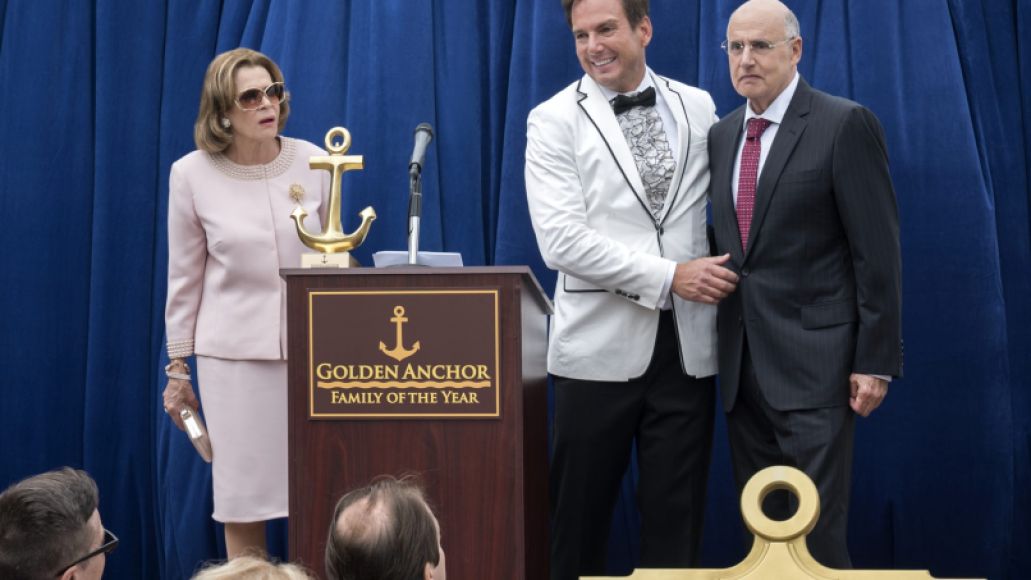 Now we come to the elephant in the room: Jeffrey Tambor’s continued presence on the show. Look, filming schedules can be rough to wrangle, and it’s clear that much of Season five was filmed before Tambor’s behavior came to public light. However, none of that makes seeing him on screen, playing George Bluth like nothing happened, any less uncomfortable or awkward. (There’s even a sly reference in an early episode to his award-winning role in Transparent that’s especially tone-deaf; there was plenty of time to cut that gag out.) In the added context of the Times interview and Walter’s comments therein, Tambor’s presence is even more troubling, especially when he gets very little to do with his beta-fied George but pout and attempt suicide several times over.

Even when one looks past all that, it’s hard to argue that the show’s maintained the sly political relevance that elevated it during its initial run. The original Arrested Development was a pitch-perfect satire of the largesse and exceptionalism of the Bush era, the Bluths a thinly veiled stand-in for that political family and companies like Enron. In the Trump era, that kind of idle political corruption seems positively passé – after all, we live in a time when most people accept that our president committed some “light treason.”

What’s more, the news cycle moves so fast that the Netflix season’s attempts to lampoon the Trump campaign through Lindsey adopting his brazen attitudes seem quaint by comparison. (Protip: it’s not revolutionary comedy to point out that Trump’s uncouth behavior makes him even more popular to his base.) Sure, that’s a product of the unique times in which we live, but Hurwitz and co. have failed to find a compelling twist on the dissolution of our democratic norms, making Arrested Development into a toothless delivery system of limousine-liberal sentiments about deplorables. 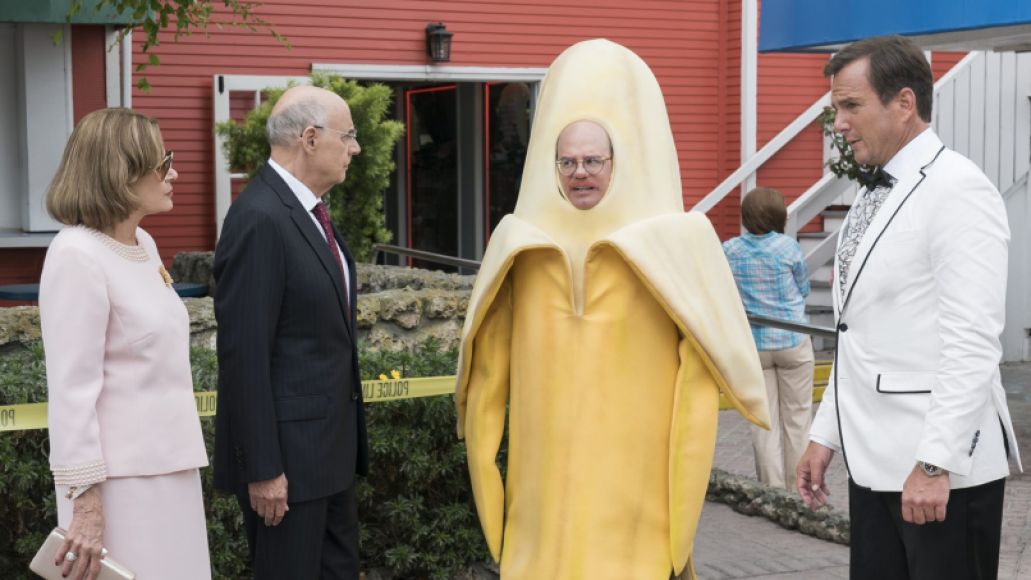 While season five of Arrested Development does its best to shake off the blues of their divisive fourth season, it’s not enough to erase the bad juju it engendered, not to mention the toxic public presence of Tambor and the apologia that surrounds him. Like it or not, it’s going to be impossible to watch these new episodes without the context of those comments, Tambor’s behavior, and the ensuing response to it.

The real tragedy is that, even without this noxious PR cloud hanging over the show, Arrested Development would still feel like a shadow of its former self. The show knows this too, the reliably self-referential program missing no chances to dig at the aging nature of their stars or the one-note nature of their characters. It’s cute, to be sure, but after a while it feels like the writers making excuses for the characters being past their prime. Honestly, it might be best for everyone – creators and audience alike – to pack up the stair car and move on to fresher climes.