Watch enough TV, read enough books, see enough movies, and a funny, not altogether unpleasant, thing happens: You start to feel the beats before they arrive. That’s especially true when it comes to genre storytelling. Meet someone who seems a might suspicious, and they’re a red herring; the seemingly unconnected character the camera lingers on just a little too long is the real bad guy. It doesn’t necessarily mean those stories are bad. Some of them are great! But it does tend to let the air out of the tires from time to time. Killing Eve’s tires? They are full as fuck.

When something comes along with full tires, something that well and truly surprises you, you can appreciate it all the more. Killing Eve is one such show. It’s not surprising because of its twists and turns, though some of those are genuinely shocking. Instead, Phoebe Waller-Bridge and (cue Carolyn Martens’ voice) an extraordinary cast of actors have created a character-driven series so rich, so weird, so invested in complexity and so willing to muck around in the trappings of the genre it inhabits that even the predictable moments are impossible to predict. Who cares what happens? What matters is how, why, what it means, and how it feels.

The answers to all those questions vary wildly from moment to moment. This is a series more than willing to take a pulse-pounding home invasion and toss in the line, “Is that a sweater attached to a shirt? Is it two separate pieces? How does it work?” But there’s one consistent answer to the last. How does Killing Eve feel? Great. It feels fucking great. BBC America’s runaway hit is already slated to return for a second season — that was a done deal before the series even premiered — and that fact alone will make its absence bearable. Well, that, and the fact that I’ve got plenty of time to get everyone I know to start watching between now and 2019.

Choosing a best episode from a season so uniformly strong isn’t an easy task. (Choosing the weakest is even harder — see below.) “Nice Face” gets a boost from sheer degree of difficulty, because first episodes are never easy, and this one even less so. How did Waller-Bridge and director Harry Bradbeer manage to draw these characters so clearly within minutes, if not moments? One could toss out any number of reasons, from great actors to dialogue that’s both wickedly smart and purposefully everyday stuff, but the best and most correct answer is this that I have no earthly idea.

The more impressive, and slightly more easily explained, accomplishment is how Waller-Bridge, Bradbeer, Sandra Oh, and Jodie Comer managed to establish the tone of the series so quickly. It’s drunken karaoke conversation one moment and violent murder the next, fights over breakfast pastries and dickswabs and surprisingly sexually charged hairstyle suggestions. The secret is that all involved take it as seriously as anyone would, which is to say that sometimes mundane things feel insanely important, and sometimes matters of life and death are just a day’s work. It’s dark, funny, sexy, sad stuff, which is to say that it’s all so very human. Episodes every bit as good and perhaps more daring would follow, but this one had to draw us into this world, and it did so in a real damn hurry. 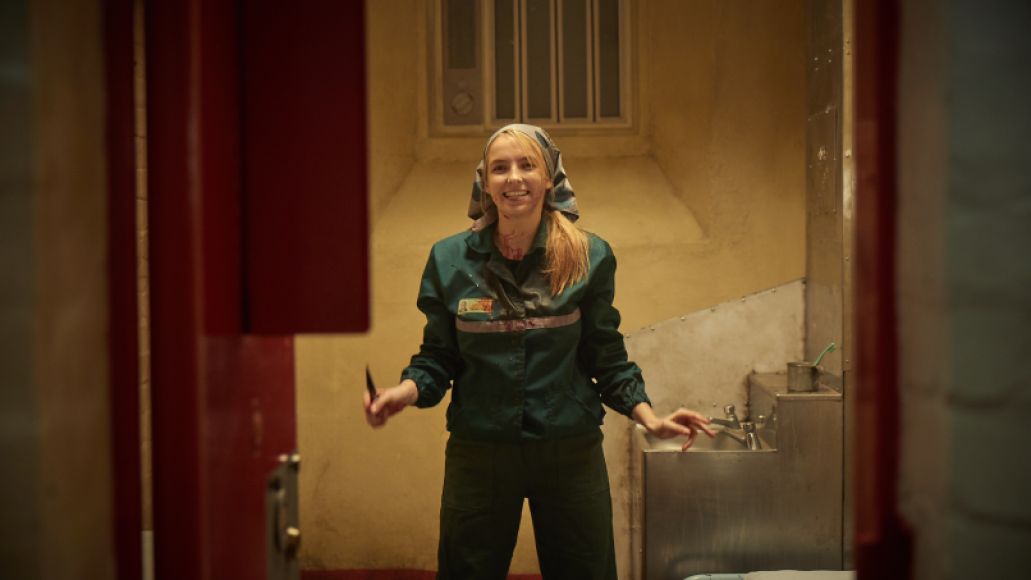 This inaugural season has been so solid, so consistently dark and delightful, that there’s not actually a weak one in the bunch. It says something that our pick, “Take Me to the Hole!”, has perhaps my favorite line-reading in the season (the titular line, pictured above), one of its most technically impressive fight sequences (in the prison kitchen), and a bunch of really delicious Carolyn (Fiona Shaw) stuff. The only real mark against it is that this is an hour that occasionally feels like it’s letting us in on a bunch of information, rather than revealing it through the actions and choices of its characters. It does that very well, but it makes for one of the rare occasions when it feels like Killing Eve is playing by the ordinary rule book, instead of giddily doodling in the margins

What, you thought I was breaking this tie? Absolutely not.

Sandra Oh is a five-time Emmy nominee who has somehow never quite gotten her due. She played arguably the most beloved character on one of the most popular television shows of the century and then didn’t work much, for reasons discussed in an affecting interview with Vulture. Now here she is, playing a role to which she couldn’t be better suited and playing it in such a way that it’s impossible to imagine anyone else doing it as well. Eve Polastri is wry, funny, wildly intelligent, startlingly energetic and always tired, deeply sensitive and emotionally dense. That Eve is the kind of role that requires an actor to play multiple, contradictory things at once can’t be denied; that she allows Oh to show off her world-class crying chops in small and unexpected ways is a bonus. Expect to hear about this performance a lot this year, and every year, until Eve ends.

Jodie Comer will be, to many, an unknown quantity when they begin the show, but within minutes, she’ll be burned into the brain. Villanelle could easily have been a tired cliché — though as with Eve, credit goes to the writers for that as well — but Comer plays her as a rambunctious, easily bored adult child who’s also somehow just a woman who wants to have a fun life and be good at her weird job. It’s a performance that’s giddy rather than flatly maniacal, and no matter how jubilant Comer’s performance gets, it’s always rooted in something dark and bone-deep. She makes choices I can’t imagine anyone else making, and yet they seem inevitable.

They’re both so good, and on the rare occasions they share a scene, they’re even better. 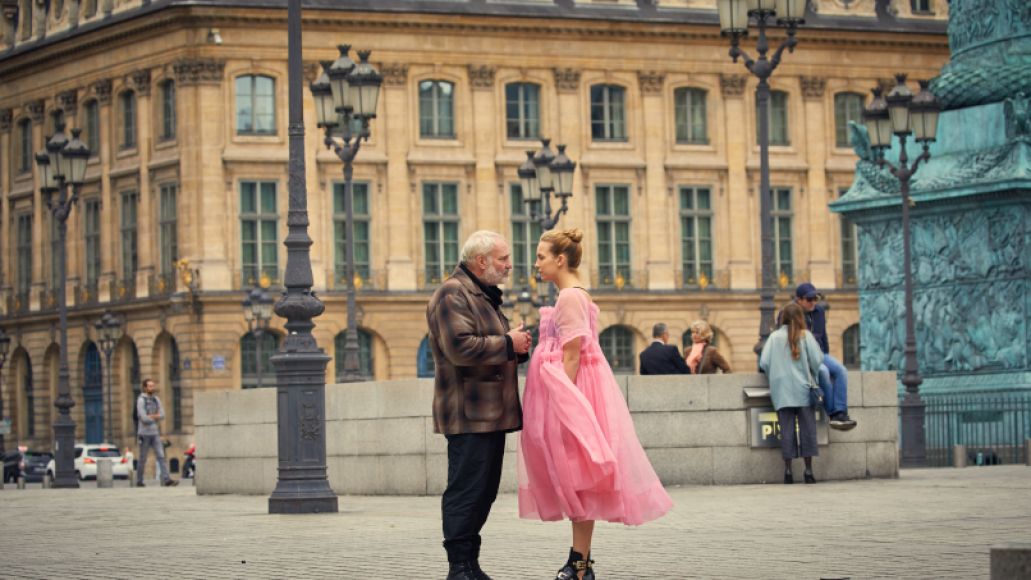 There’s no shortage of great costuming on television these days — you could write a book just about the outerwear in Game of Thrones, and I suspect someone will. But even in that crowded field, Phoebe De Gaye’s costumes for Killing Eve stand out. There are costumes that advance the story and do so marvelously — the green scarf, the black-and-white dress, the Sandra Oh wigs (though to be fair, those belong more to hair/makeup) — and there are costumes that tell us something about who these people are. Of all those, the sweater-shirts and the practical boots and the jaunty hats, Villanelle’s pink dress is the best, and it’s easily one of the best television costumes of recent seasons. Look at her! You know exactly who that woman is, and you want to know more.

BBC America President Sarah Barnett began developing Killing Eve with Waller-Bridge several years ago, and per this excellent Vanity Fair piece, she gave the writer one piece of advice, over and over again: “Keep it weird.”

She kept it weird. The scene above is only one example; I’m particularly partial to Carolyn’s line about a rat drinking a coke with both hands or her trashed hotel room in Russia. But you can take nearly any scene in this series and find a place where it gets a little weird. Thanks for giving that note, Ms. Barnett. We who love the weird salute you.

“KILLER SHANGRI-LAH” AND OTHER KILLER SONGS

The music’s great, right? “Killer Shangri-Lah” by Pshychotic Beats is probably the most recognizable, returning in the finale for what felt like the 30th time (each more welcome than the last, I might add), but many of the show’s delicious needle-drops come courtesy of Unloved, the “electronic-noir band” (H/T Tunefind) from David Holmes, who is also the show’s composer. Tunefind’s terrific interview with Holmes and Music Supervisor Catherine Grieves is worth a read, if only to learn the names of all these terrific songs, but the pair also offer some fascinating insight into the tapestry of sound they wove for the series. 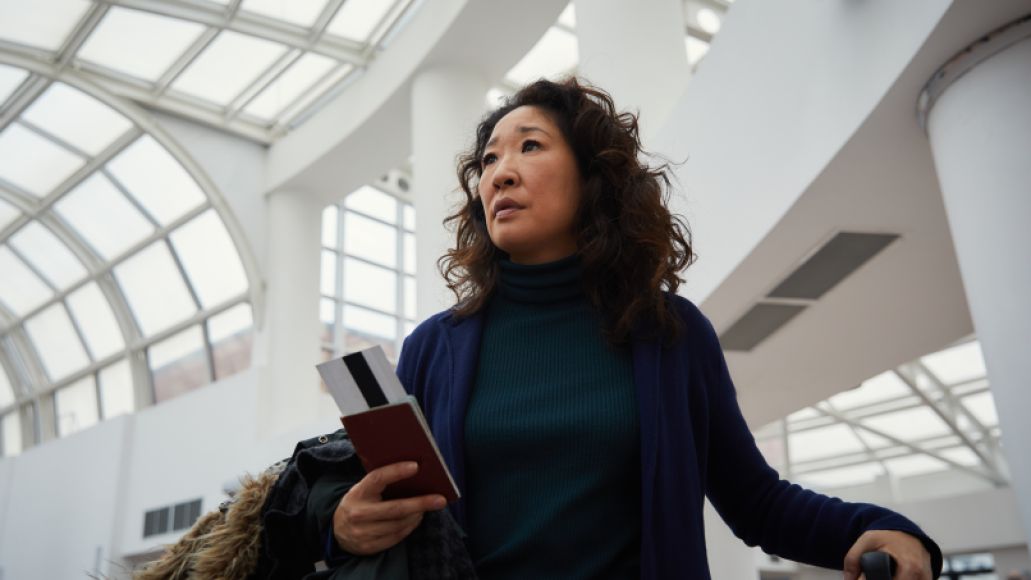 What a perfect ending to this season. “God I’m Tired” draws together the predator and her hunter, as we all knew it must, but it did so in a manner few could have seen coming and drove them apart in such a way that their relationship will have been irrevocably changed. That it was impeccably acted, written with both softness and acidity, and is deliciously, uncomfortably hot is no surprise. That it might break your heart, just a little, is more unexpected.

But what’s sitting with me now is this: The ending is so well-constructed, so perfectly open-ended and exciting, that it’s easy to overlook the threads left hanging. Niko still hasn’t returned Eve’s call, and perhaps he never will. Carolyn fires both Eve and her son, but they also still have valuable information, and her role (or lack thereof) within the Twelve is no clearer. And perhaps most importantly, Kenny saw Nadia’s note fly under that door, got all excited … and then we never heard about it again. A more traditional cliffhanger would not have suited Killing Eve, but I’m grateful to Waller-Bridge for leaving these little breadcrumbs. Even if they go nowhere, they’ll give the show’s many fans something to stew over in the long, cold months to come. 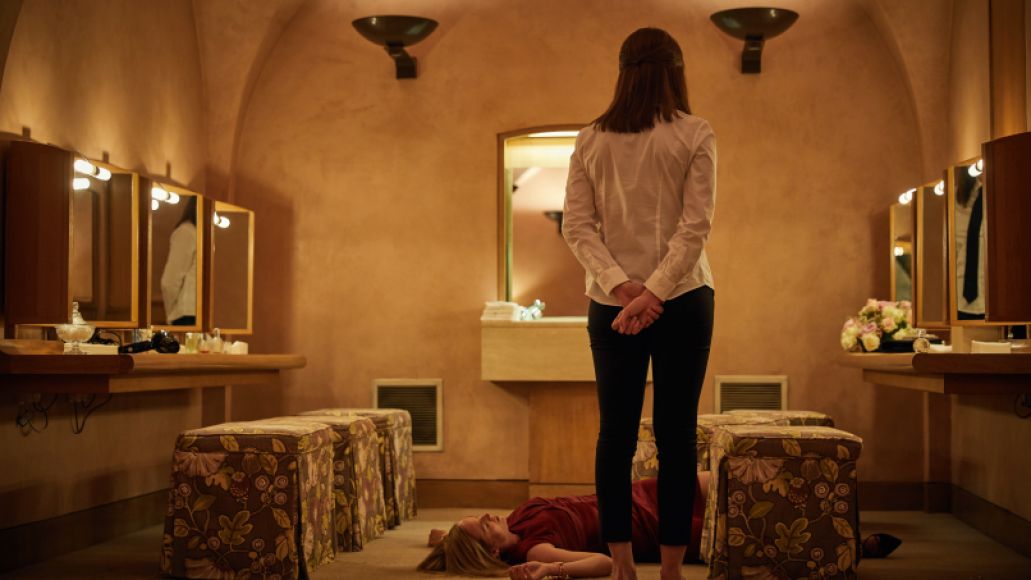 Killing Eve is remarkable. If next season is a disaster, we’ll look back at this as one of the great single seasons of television … but it won’t be a disaster. If Waller-Bridge, Oh, Comer, and company have proven anything this season, it’s that there’s an appetite for programming with complicated, frustrating, unpredictable women at its center. If they’ve proven anything beyond that, it’s that they know exactly what they’re doing. Villanelle is a force of chaos, but also of competence. We never know what she’ll do next, but there’s never any doubt that she’s got a firm grasp on the nature of every situation she’s in.

That’s Killing Eve, too. Chaotic, compelling, and wholly in control. I can’t wait until it’s back.