Seinfeld went off the air at the peak of its popularity. As Jerry Seinfeld explained at the time, “For me, this is all about timing. My life is all about timing. As a comedian, my sense of timing is everything.” It was exactly the kind of outside the box thinking we had ironically come to expect from the show. And really, such a tactic was just part of his grab bag of tricks as a comedian. But for many, the ending was simply inscrutable.

The last episode was an hour-long bonanza that hinted at a love between Jerry and Elaine (Julia Louis-Dreyfus) and success for George (Jason Alexander) before snuffing out both storylines in favor of a bizarre, absurdist plot in which the four main characters were literally put on trial for their nine years of callous indifference and selfish behavior on the show. Surprising and original, yes. But the ending ruffled more than a few feathers.

You’re probably always going to disappoint people when you take away their favorite show right as its getting good. But, the ending to Seinfeld was different. Some felt it was preachy, that it up-ended the whole non-point of the show, it was rushed, or that it was an apology for the depraved hijinx of the last nine years. Some went as far as to say they felt the joke was on them, the viewer. 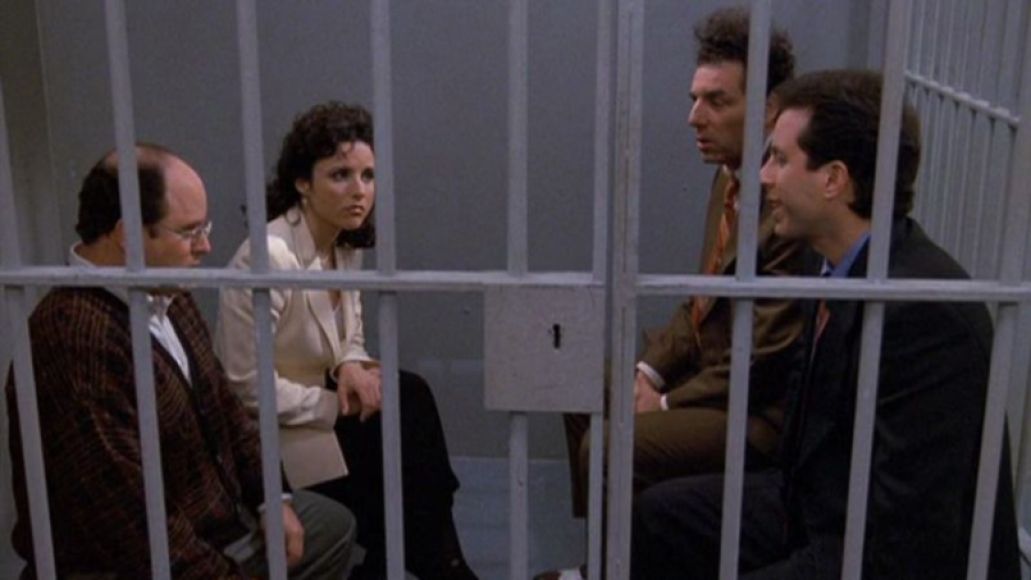 The finale employed a twist on the classic “clip show” genre of sitcom episodes which was then a popular way to end or fill seasons. This time, instead of characters recalling their fondest memories, the gang was literally put on trial for all of their misadventures over the last nine years, with the past episodes brought up by various returning characters as evidence of their wretchedness.

It seemed like a slap in the face. Seinfeld was a show about nothing, after all. Larry David had famously instituted a “No hugging and no lessons” rule that guided each episode. Season after season they managed to deconstruct and repurpose old sitcom tropes to fit in with the “no lesson” mandate as they selfishly and mindlessly cut a swath through the lives of anyone, friend or foe, who was foolish enough to enter their sphere of influence. It was the literal point of the show in as much as a show about nothing could have a point. It was what people loved about it, and now in its final hour, we’re told they were wrong all along. Indeed, that we were wrong all along.

It’s subjective to say whether or not the final episode was good or bad or in the spirit of the series. (I personally think it holds up.) But, through the matrix of its absurdist kangaroo court set up, and the testimony of all the people Jerry had wronged over the years, there’s a connection that ties all nine seasons together quite neatly. It’s not about some kind of universal or karmic retribution. It could be seen more as a realigning of the sensibilities of TV’s Seinfeld with those of real-life Seinfeld. 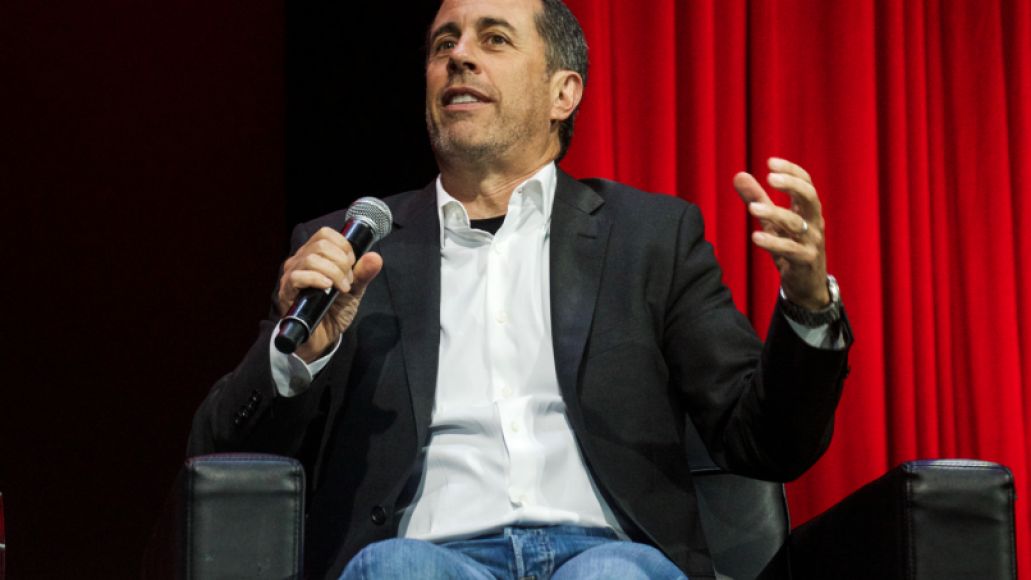 After all, the show purported to be about Jerry Seinfeld, and it featured a number of people culled from his real life. But there are many points in the narrative with shocking differences, where TV Jerry makes different choices that seem to rue his destiny. Looking back, no in-universe reason is given as to why TV Jerry is so selfish and unaware, but there is one key difference between his real-life counterpart and maybe that’s why the show went the direction it went and had to end the way it did.

In reality, Seinfeld has been practicing transcendental meditation since he was a junior in college. Yes, really. Maybe the idea of Jerry sitting in a chair, silent, eyes closed and sinking deeper and deeper into a state of relaxation sounds more like a Saturday Night Live skit or a Seinfeld B-plot, but it’s true. In fact, in recent years, he has even gone as far as to make appearances, speeches, and videos for his friend and fellow transcendental expert, David Lynch.

In any event, the idea that Seinfeld has been entering a nonmaterial plane of existence that dissolves the ego and self for 20 minutes a day since the ’70s doesn’t really line up with the character he presented for nine seasons. While the Seinfeld of the real world is a kind but crotchety self-aware person, the televised Seinfeld is pure neurosis. A germaphobe obsessed with breasts who mugged an old woman out of desperation, and lies constantly to maintain his ego. A man who has ruined the lives of countless people (including himself) over the pettiest grievances imaginable. That doesn’t sound very, transcendent, does it? 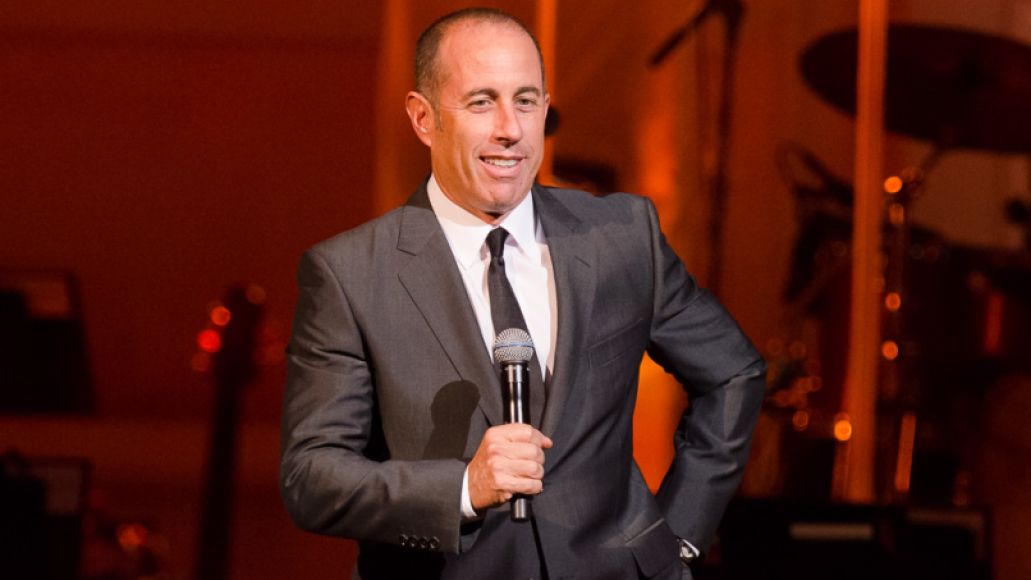 Of course, Transcendental Meditation isn’t a religion or a philosophy. It doesn’t propose to make its practitioners into arbiters of moral superiority by any means. However, most of Jerry’s behavior isn’t necessarily immoral. In fact, it’s very specifically rooted in neurosis and anxiety. The exact things which Transcendental Meditation very specifically claims to reduce while increasing your calmness and clarity of mind. These are all benefits which are bereft in the Jerry Seinfeld who spent nine seasons holding grudges and obsessing over the minutiae of daily life.

Perhaps, after all this time, we’ve discovered a secret to the on-screen Seinfeld — a secret nested in the Bizarro Jerry episode. It’s not Kevin — Elaine’s new flame and mirror to Jerry — who is the Bizarro Jerry. No, the real Bizarro Jerry was always the petty, scheming, ego-driven character at the center of Seinfeld. The Jerry who never followed his friend to a meditation course in college, stuck with it, and had the clarity of mind to avoid a terrible pilot about being someone’s, Butler. This is the Jerry who welcomed his neighbor Cosmo Kramer (Michael Richards) into his inner circle instead of keeping him at arm’s length and as a result got caught up in mail fraud, dognapping, and mail-order pornography. This is the Jerry who couldn’t quite remember his zinger about a bad B-movie and wound up at a holistic healer with George, mocking the very notion of non-western thought and medicine the entire time.

Throughout the show, we see TV Jerry as the antithesis of an enlightened, calm, and serene practitioner of Transcendental Meditation. In fact, as we see in the final episode, it’s as a result of his commitment to pithy jokes at the expense of others, unsolicited advice that ends in deportation, and the objectification of a former girlfriend’s body that Jerry is literally locked away for what the judge calls Criminal Indifference. 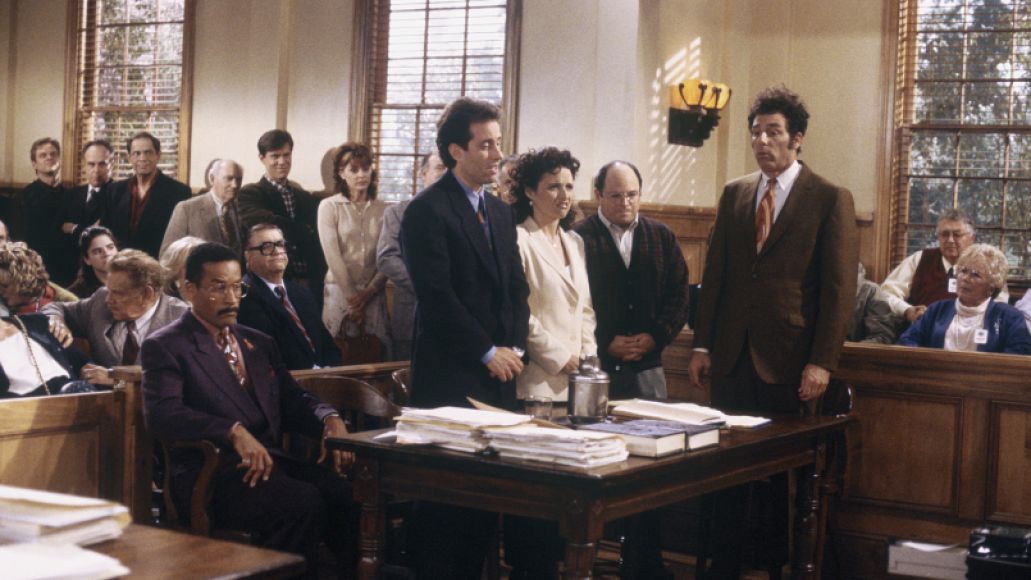 As Judge Arthur Vandelay sentences Jerry and his friends, he comments on how incredulous it is that those four ever found each other and explicitly states that his sentence is to lock them away from society so they are forced to “contemplate the manner in which you have conducted yourselves.” This is important because it’s not floated that they deserve this as retribution for their crimes, but rather as an opportunity to reflect on what they have become.

With this in mind, it’s not surprising a show, which is the result of the character Jerry not meditating and finding any kind of inner peace and thus making a never-ending series of ego-based bad choices, ultimately ends with that same Jerry being sentenced to sit and meditate on his actions and place in the world. It’s, in fact, a more fitting end cap to the series than the idea that society was trying to impose some kind of universal justice on them for being blithely callous.

Maybe Seinfeld was always, in some way, a satirical exploration of what might have become of Jerry if he had never dedicated himself to the practices of Transcendental Meditation. And in its final hour, the show chose not to punish him, but rather to set him along the path to freedom from the tyranny of his ego and the anxiety it has wrought. It’s not exactly the punitive justice we might be used to, but rather an enlightened approach only someone like the real Jerry Seinfeld could think of for himself.

Meditating on Seinfeld: The Transcendental Explanation Behind “The Finale”