There’s a reason why we slotted Shaky Knees into our Big Four Shuffle discussion earlier this year. At just six years young, the Atlanta, Georgia, festival has already earned a reputation as one of the premiere east coast music events. Since its inception, founder Tim Sweetwood and his partners at C3 Presents have managed to put together bills that would sell out festivals with twice the capacity of the various ATL parks Shaky has called home. When you’re this good at putting together a lineup, however, you’re left with an enviable problem: conflicts. Though Shaky Knees’ footprint in Central Park should be small enough to theoretically catch competing acts if you’re willing to sacrifice a few minutes of music, you’ll inevitably have to make some tough decisions.

Well, we’re going to help you with that. It’s true that nearly every space in the 2018 Shaky Knees schedule poses some sort of conflict, but we can’t decide all your druthers for you. So we’ve taken a look at 10 of the biggest time-slot clashes and made our very educated, carefully considered choices. Hey, at least you won’t have to skip any of the headliners. 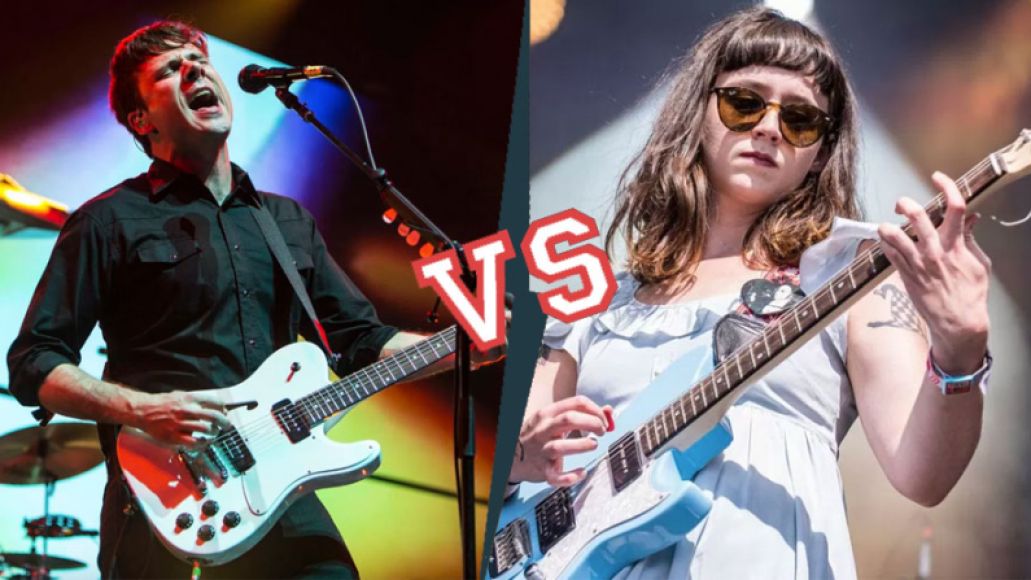 Friday 4:00 PM — It’s strange to think of two bands being so different yet still being such a heartbreaking conflict. On the one hand is Jimmy Eat World, an emo rock band that probably still gets too many people going, “They’re still around?” On the other is Waxahatchee, an indie project whose last three albums were easily one of their years’ best. Both deliver strong-as-steel live shows, and both have the repertoire to put together a setlist without lulls.

Our Pick: Look, call us nostalgic if you want, but Jimmy’s catalog is severely underrated, and we’ll be singing along to way more than “The Middle” when we catch this set. 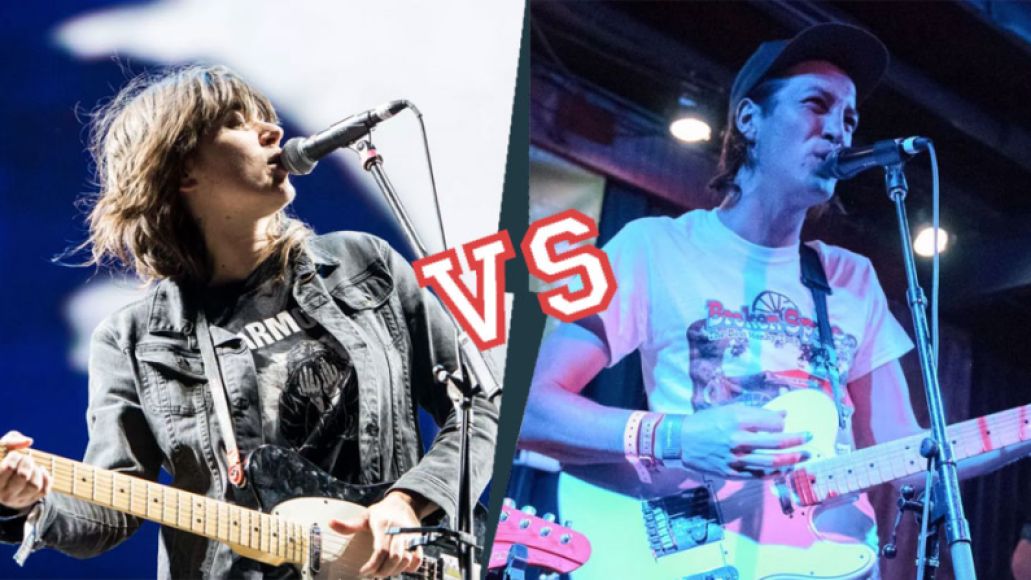 Friday 5:00 PM — Australasia is having a moment. Kiwi and Aussie artists are breaking out right and left, and somehow Shaky Knees has two of the best lined up right next to each other. Courtney Barnett we all know about at this point, and that’s why we’re so excited about her forthcoming Tell Me How You Really Feel. Marlon Williams may not be as well known yet stateside, but his recent Make Way for Love is already one of the most stirring efforts of the year. Shredding rock versus alt-country crooning — which do you choose?

Our Pick: In the early evening on the first night of a festival, you’re looking for a jolt of energy to bring you into the nighttime. Williams will be a treat, no doubt, but we’re going to hear some of Barnett’s new tunes instead. 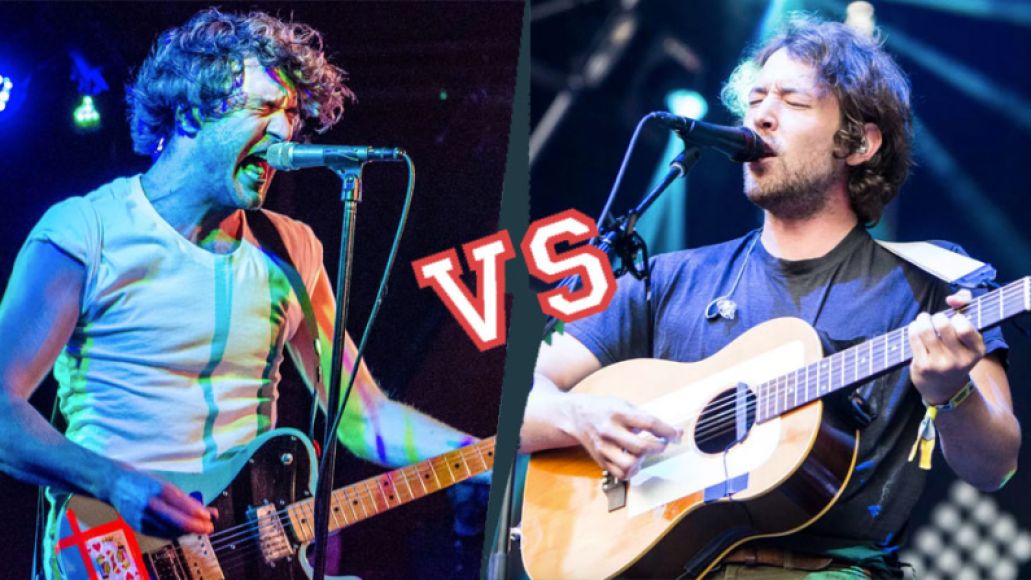 Friday 8:00 PM — We’re not sure there’s going to be an excess of crossover between Fleet Foxes’ pastoral folk and Japandroids’ two-man noise rock. Still, both bands are indie favorites, and they both just returned from fairly long absences last year. Making the decision even more troublesome is that both new records are really freaking good. I mean, which one did you like better?

The Sherlocks vs. Sun Seeker 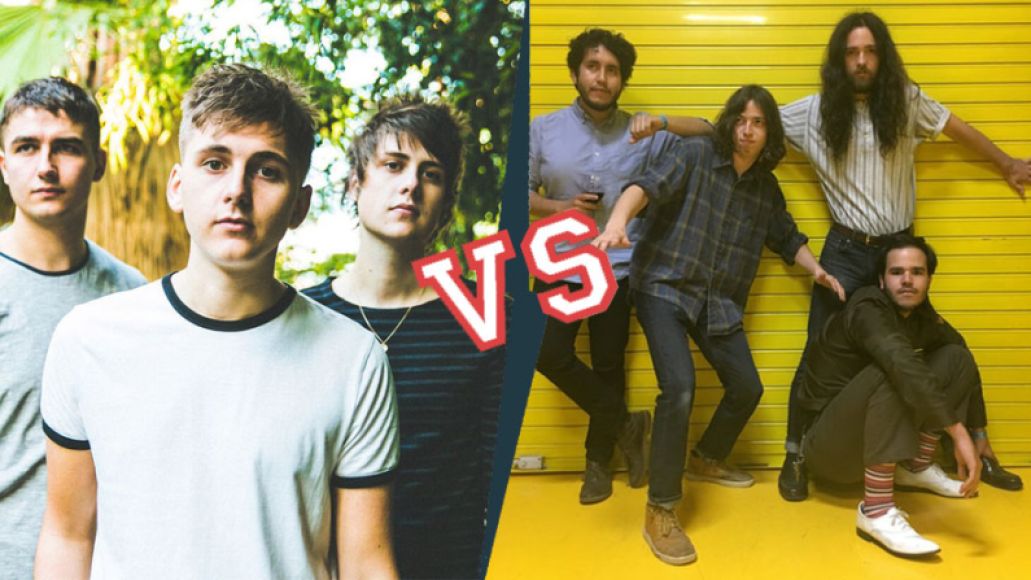 Saturday 12:45 PM — Over the last few years, we’ve given exclusive spotlights to both these young bands. The Sherlocks are four Sheffield boys who trade in the hooky type of alternative that has long made Britrock a scene in and of itself. They’ve already gained quite a bit of popularity over the last two years in their home country, and it’s nice to see them getting some US festival real estate. Sun Seeker, meanwhile, put out their debut EP, Biddeford, on Third Man Records last year. That sort of signing should be just about all you need to know about this Nashville cosmic folk quartet.

Our Pick: An early afternoon set with the Sun Seekers is surely going to be a great way to start your day, but the rarity and excitement of The Sherlocks is going to pull us over to the Peachtree stage. 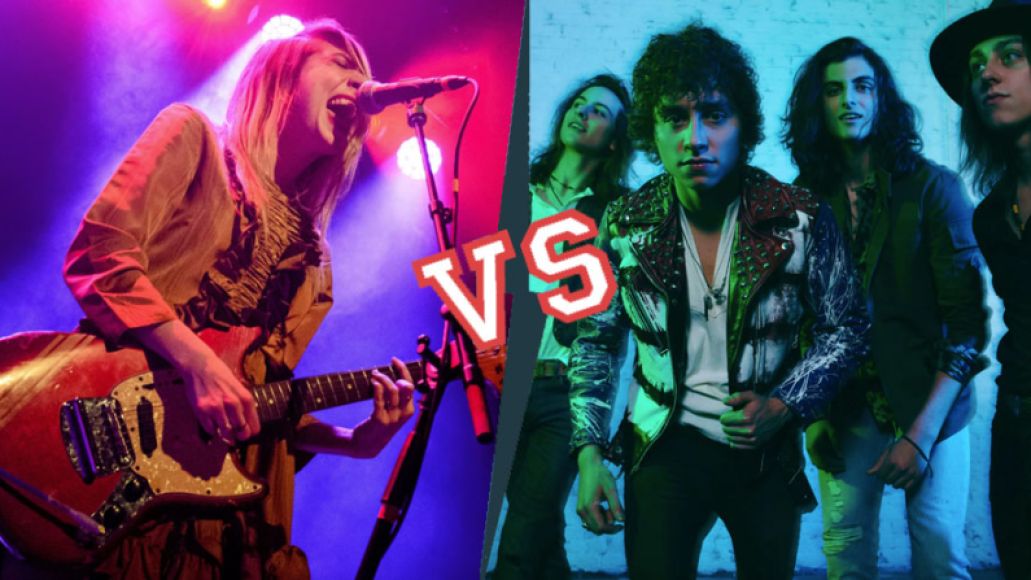 Saturday 3:45 PM — This one might come down to how you like your rock: Pop punk or bluesy? Greta van Fleet and Charly Bliss had huge coming outs in 2017, with the former giving a new spark to hard rock and the latter putting out one of the most electrifying power pop debuts in years. And their placement in a mid-afternoon slot is perfect for those seeking a shot in the arm as we approach the halfway mark of day two.

Our Pick: Gah, this one’s really tough. Frankly, the thing tipping it in Greta van Fleet’s favor is simply that we haven’t seen them live before. We won’t blame you in the slightest for going to get Blissed out. 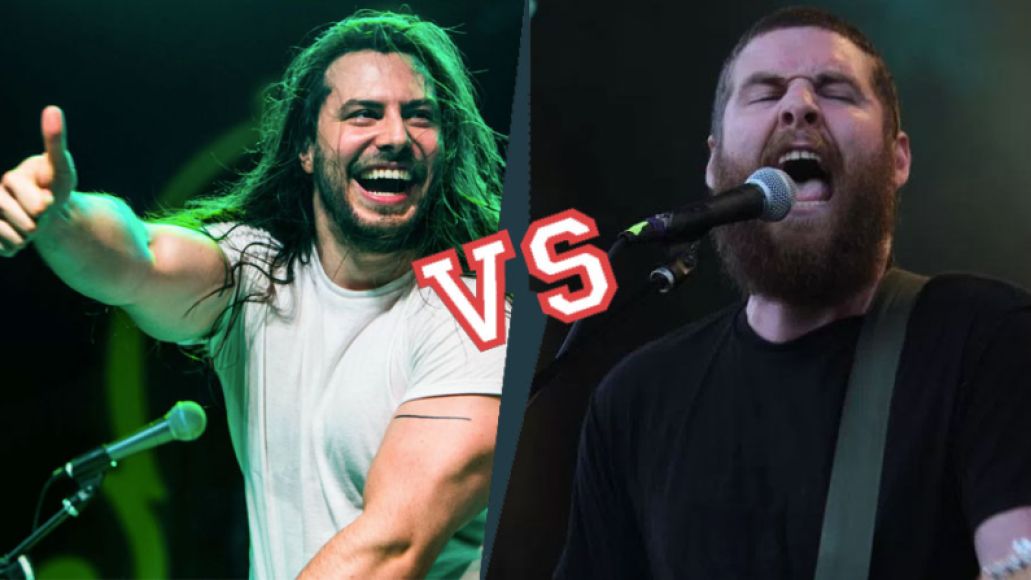 Saturday 6:30 PM — Two artists with incredible staying power for very different reasons line up on opposite stages at dinner time on Saturday. Manchester Orchestra is known for keeping diehard fans rapt with their melodic, heartfelt art rock and frontman Andy Hull’s captivating, dynamic vocals. Andrew W.K. is known for … well, for partying. And partying hard. It’s not a stretch to say that ManO is going to have a crowd more ready for sing-alongs while W.K. will have people waiting for “those songs,” but that doesn’t mean the rest of his set isn’t going to be a hella good time.

Our Pick: Which is why we’re going to catch Andrew W.K.’s sure-to-be sweaty show. His new album, You’re Not Alone, may finally be the worthy successor to I Get Wet we didn’t know we were waiting for, and dammit this dude is just fun as hell.

Cake vs. Matt and Kim 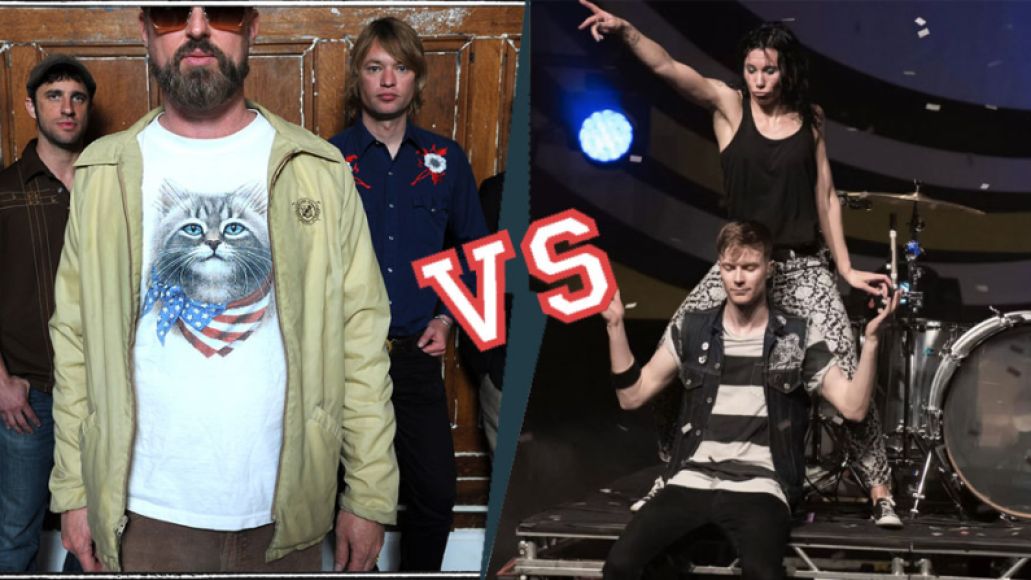 Saturday 6:30 PM — This might seem like semi-strange scheduling as you try to transition from bands like The War on Drugs to Queens of the Stone Age, but it’s actually kind of genius. Those two acts are heavy — for very different reasons, mind you — so having a bit of carefree joy to break it up should be a welcome respite. You can get that either with ’90s and oughts staple Cake or party dance-pop duo Matt and Kim. In a way, you sort of know what you’re getting with either, so it could depend on if you’re feeling like a familiar sing-along or a confetti cannon party.

Our Pick: This could all change based on exhaustion levels as we head into the day two headliners, but our thought is go where the party is, and that’s Matt and Kim.

Frankie Rose vs. The Wild Reeds 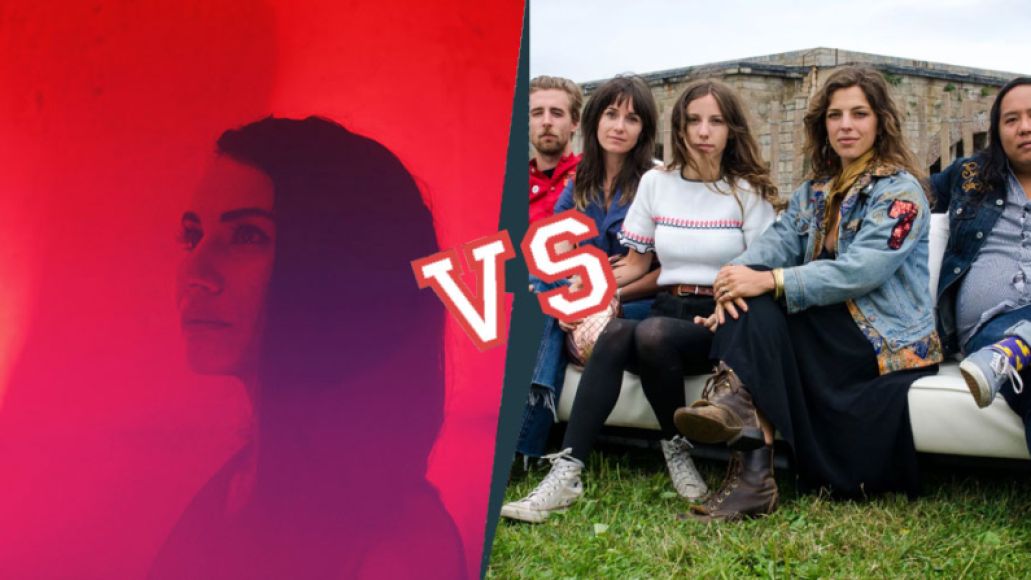 Sunday 12:30 PM — Look, we all know how day threes can be, but these two acts are worth the early rise. The Wild Reeds are that perfect bridge between indie folk and rock, demonstrating just how explosive the former sound can really get. Frankie Rose is one of the most under-heralded stalwarts of indie pop’s various subgenres, and her latest solo effort, Cage Tropical, is gorgeous. It’s hard picking between two of the most talented female-fronted artists on the bill, but it’s too early to be spreading yourself across the entire site, so you’re gonna have to choose.

Our Pick: Like we said, getting in on an early Sunday set can be trying, so we’re going with the biggest aural caffeine boost being offered: The Wild Reeds. 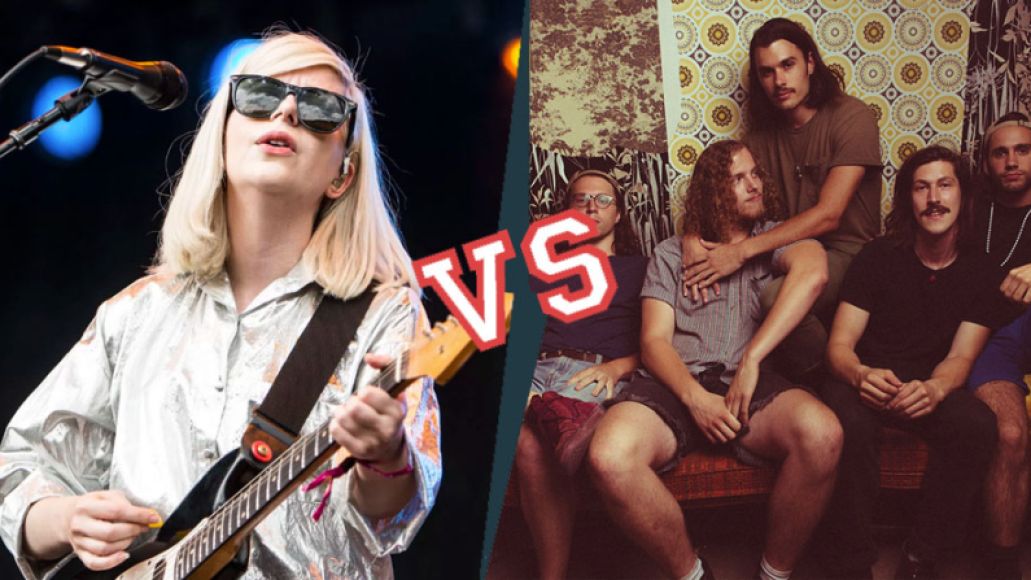 Sunday 2:45 PM — First thing’s first: You’re probably not going to see Steve Harrington at the Post Animal set. Actor/guitarist Joe Keery doesn’t tour with the band, so let’s just move on. What you will get is one of the most exciting new psych rock acts around — and that’s noteworthy considering how rare a true psych band breaks big. For a different kind of psychedelic kick, you could catch Toronto shoegaze dreamers Alvvays. Either way, you’re going to be awash in some wavvy guitar licks and comforting mid-afternoon jams.

Our Pick: It’s always nice to catch a band on the come-up, which in this case is Post Animal. Their debut, When I Think of You in a Castle, is pretty dope and definitely worth skipping a more established act to see how it translates to the stage.

The Voidz vs. Tenacious D 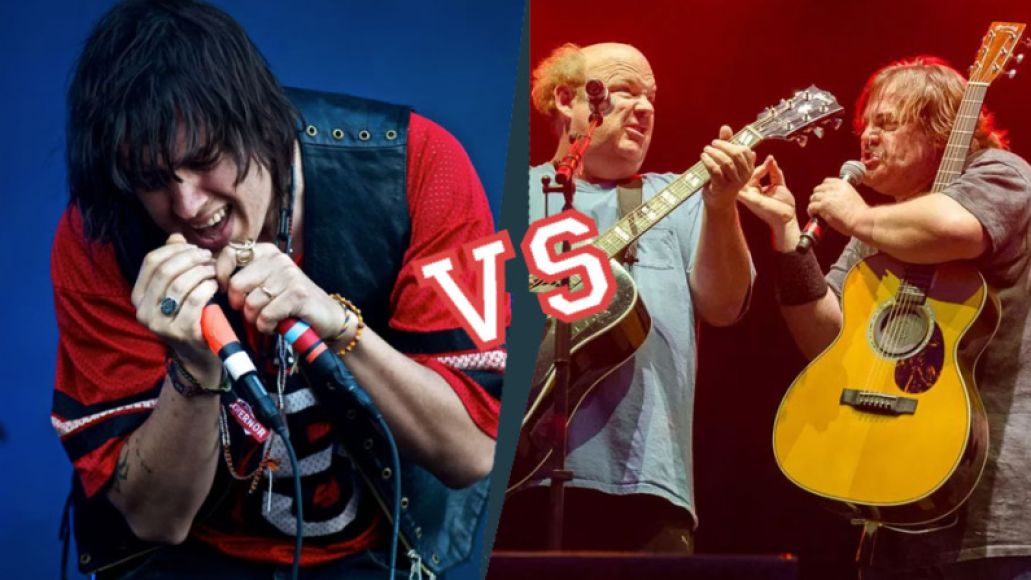 Sunday 7:30 PM — It’s hard not to look at this as Jack Black vs. Julian Casablancas. They’re both just such big names that seeing either of them onstage is going to be memorable. But Tenacious D and The Voidz should be considered as more than just their frontmen. It might be as straightforward as weighing comedy hard rock and experimental rock; either one might plainly not be your bag. Maybe it comes down to how good of a spot you want for The National (Tenacious D will be closer over on the Piedmont stage). For us, it comes down to one thing…

The 10 Hottest European Music Festivals to Check Out This Summer